London, England: There was no rain on the schedule today and also no meetings or lectures. Carolyn and Dan headed off to Windsor Castle. Tamra, Steve, Dave and I had previously visited Windsor, we decided to be tourists closer to town. We walked about a quarter of a mile to the Canary Wharf dock of the Thames Clippers, a ferry-type boat that carries commuters and tourists up and down the Thames River. 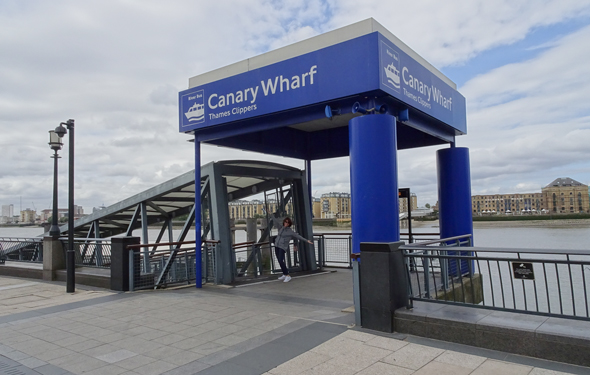 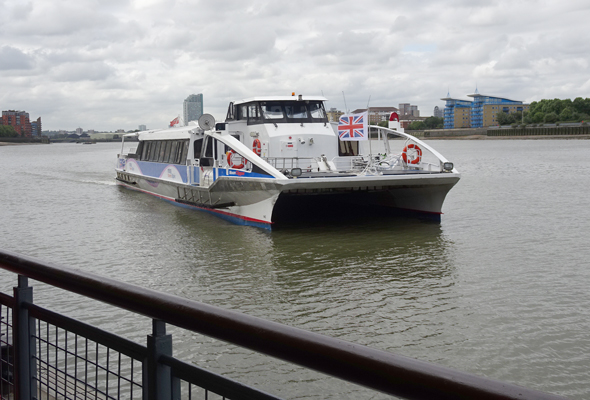 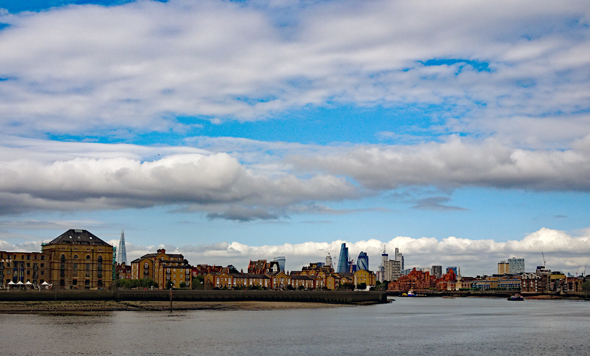 View of London from Canary Wharf 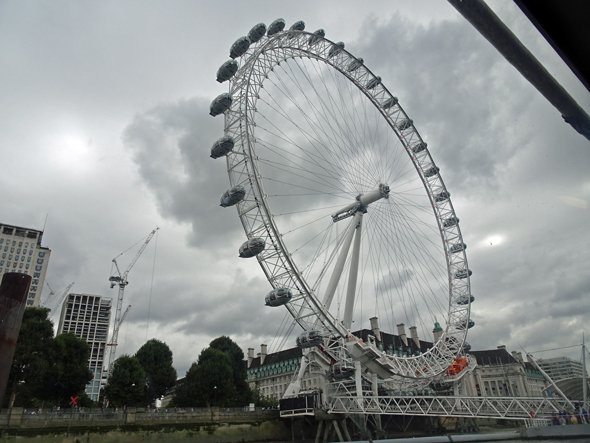 We exited the boat at the London Bridge City Pier to have lunch at one of Tamra's favorite pubs, The Anchor Bankside Pub. Tam's parents are from London, so she has visited London countless times and knows the city well. 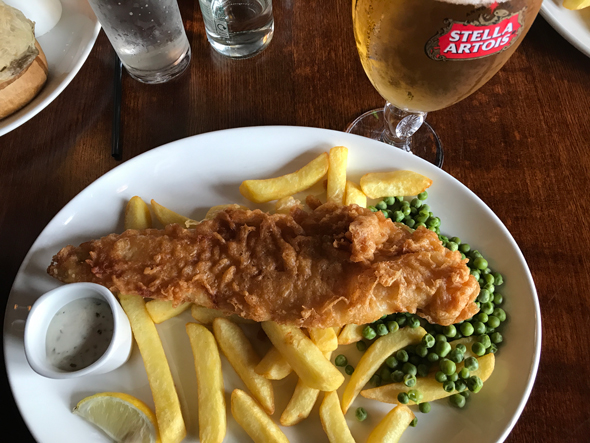 You will not be surprised to learn we had fish and chips - and beers. Typical lunch order, but the fish was was super light and the batter was especially crunchy.

Just a few blocks from the Anchor Pub is Borough Market, one of the oldest markets in London. The food stalls have had a resurgence over the last several years and the market is now thriving for locals and tourists alike. Steve was the only one of our party to have not yet visited the market, so we all had a good look around the stalls and kiosks and I snapped a zillion photos: 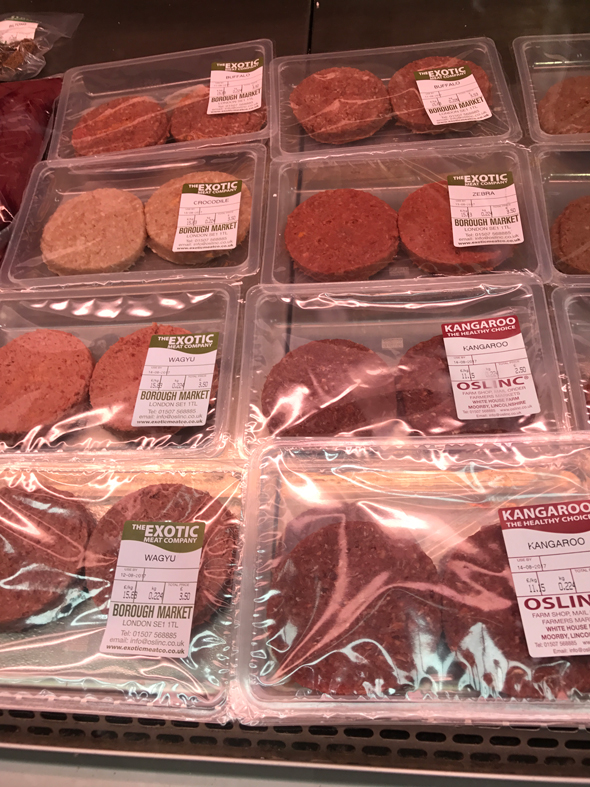 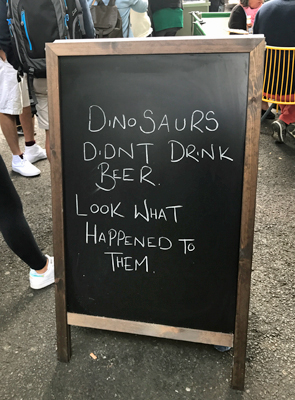 From Borough Market, the four of us hopped in a taxi to the Nike Hospitality Center, where we met friends and ran into Mo Farah. Ya know, just hanging out. I also spoke with Michelle Carter, who won the bronze medal in the shot put last night. Then we had time for a little rest (and photo editing!) back at the hotel before heading to London Stadium at 6p for Day 7 of the Championships.

Dave and I took the shuttle bus to the stadium this evening. It was not raining, but it was not warm. I wore three layers tonight. We stopped by the hospitality area for a snack. Tonight's buffet offerings included sliced sausages/deli meats, cubed smoked salmon, a curried couscous salad and an heirloom tomato salad with basil and Kalamata olives. The buffet also offers a fine selections of sliced breads and some of the best butter I have ever encountered. The butter is served in round discs - sliced from long tubes of creamy heaven. It looks like sliced mozzarella cheese and the only reason I take a slice of bread is because it would be tacky to shovel slices of butter into my mouth. And no one wants to be tacky in front of the IAAF.

Entrees are passed by a team of servers. Each night, there are three or four different selections offered - a meat, a poultry (often Duck), a fish and a veggie or vegan option. The entrees are served in very small dishes. 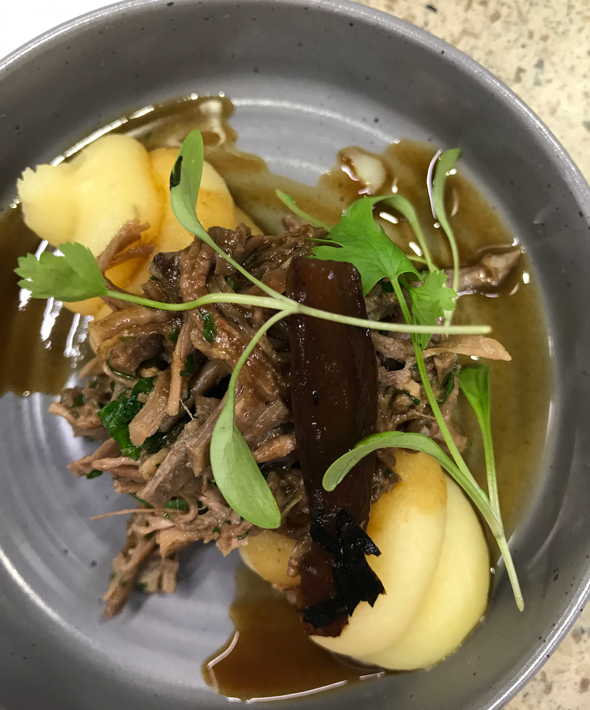 Tonight I saw a cheese tortellini, a grilled salmon dish and British beef, shredded and served over a bed of mashed potatoes, then garnished with caramelized onions and fresh herbs. Pretty fancy for a track meet. The bartender, Mamadou, a friendly and charming young immigrant from The Gambia - with dimples so deep they should come with a warning - decided we needed extra large servings of wine this evening to celebrate Phyllis Francis and her gold medal.

Love me some dimples.

Dave and I stayed in the hospitality area so I could better photograph Duck-alum Phyllis Francis receiving her 400m gold medal. 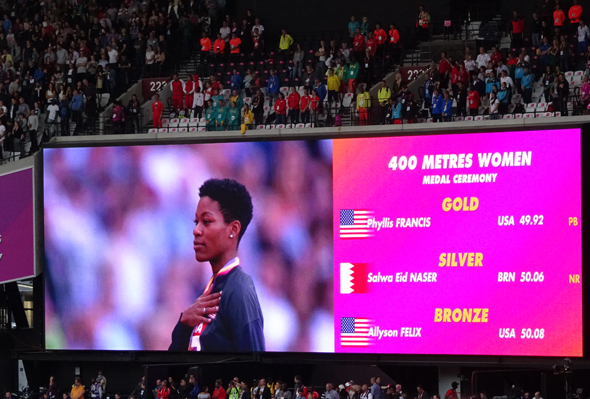 Gold Medalist, Phyllis Francis, as the US national anthem is played

It goes without saying that I had no eye makeup remaining after all the tears spilled watching the lovely Ms. Francis receive her gold medal. GO DUCKS!

But just a while later, we shed sad Duck tears when Matthew Centrowitz failed to make it out of the 1500m prelims. Not only failing, but finishing last in his heat. 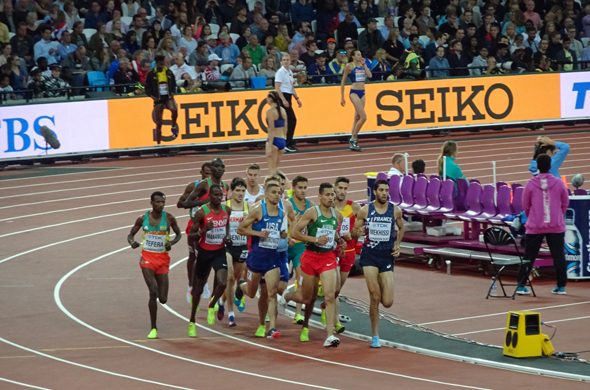 We were so disappointed that Centrowitz did not advance, but know he has been dealing with injuries. The other two Americans in the heats, Robby Andrews and John Gregorek, advanced to the semi-finals on Saturday. Our friend, and only US competitor in the men's javelin, Duck grad Cyrus Hostetler, did not advance. Ex-Duck Sprinter Deajah Stevens ran a great race to qualify for the 200m final tomorrow night.

Matthew's sister, Lauren, came to visit us in our stadium seats after the 1500m. 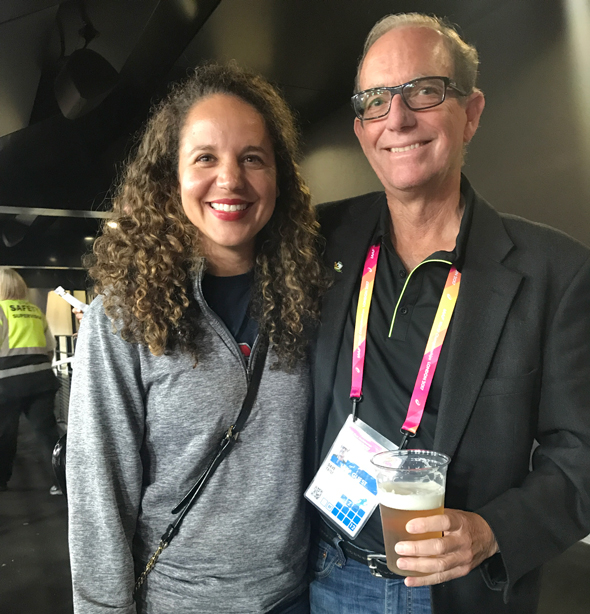 After all the hype, intrigue and speculation surrounding the men's 200m final, favorites Wayde Van Niekerk (South Africa) and Isaac Makwala (Botswana) were bested by Ramil Guliyev of Turkey. Guliyev, who used to play for Azerbaijan, won gold in 20.09. Van Niekerk took the silver; Jereem Richards (Trinidad & Tobago) won bronze. Makwala was 6th. Too many heats. Too many semi-finals. Too much Norovirus.

Running, jumping and throwing are very tough paths for making a living. So many variables. Injuries. Weather. Travel. Not sleeping in your own bed. Some days, it is your day. Other days, it is not.

Until my next update, I remain, your enduring correspondent.