London, England:  As of noon-ish today, Dave is free of meetings and we have no more commitments with the University. At noon, we had a walk around the Canary Wharf/East India Quay area near our hotel. Food carts were lined up along the wharf. We learned the carts are here Tuesday-Friday to feed the many workers in the surrounding office towers. Many of the towers seem to be banking centers, but below all the towers is a massive Tube station - the Jubilee line - and a gigantic shopping mall, so this area always seems very active. 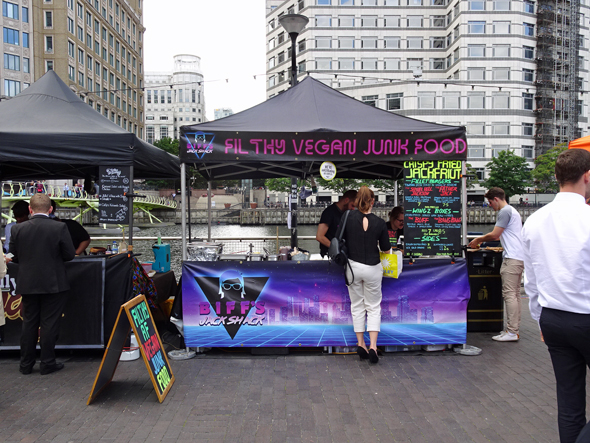 I especially enjoyed looking at the fine selection from Filthy Vegan Junk Food. They use jackfruit in many of their dishes, including burgers and "wings". It was a bit too nippy and windy to dine outdoors, so we continued across one of the pedestrian bridges to an area with a lot of sit-down-inside restaurants. 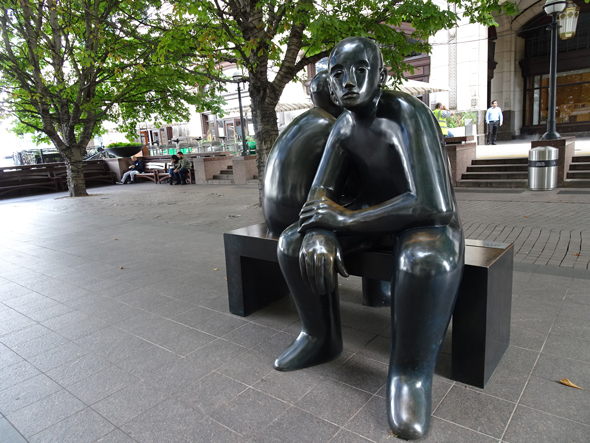 This statue is appropriately titled "Two Men on a Bench" 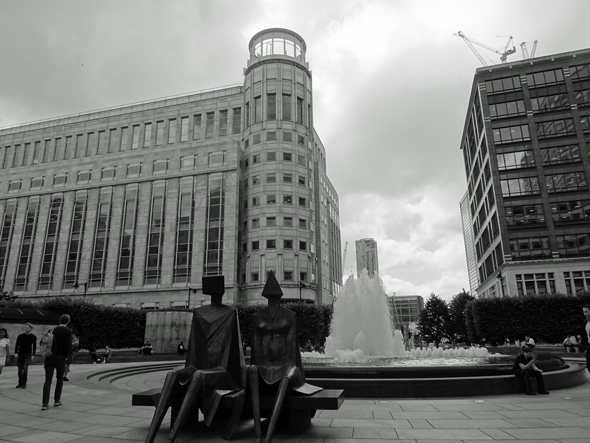 So many beautiful new buildings, art installations and fountains.

We also saw a game warden walking around the area (above) with a huge falcon on her arm. You should have seen the pigeons scatter! 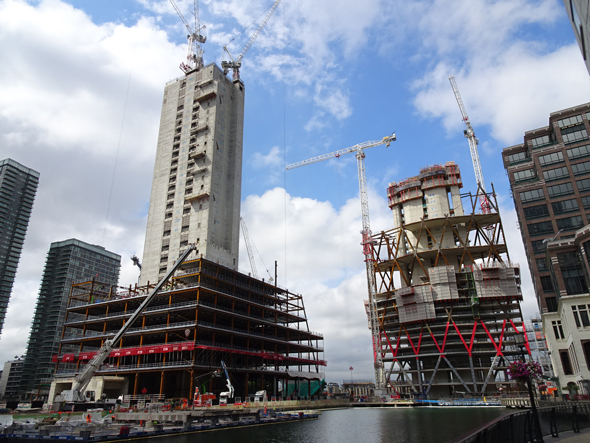 Cranes and scaffolding everywhere. New buildings going up and old buildings under repair or refurbishment.

We decided on a French restaurant for our once-a-day meal... whether we need it or not... only because it was very close and the menu looked nice. Cafe Rouge served us a lovely lunch. 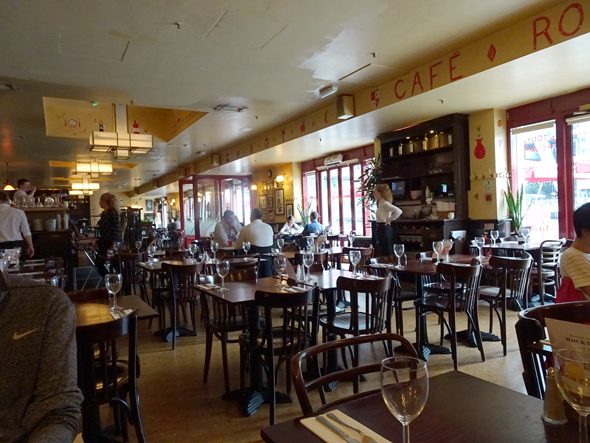 Fairly empty at noon, the cafe filled up before we left 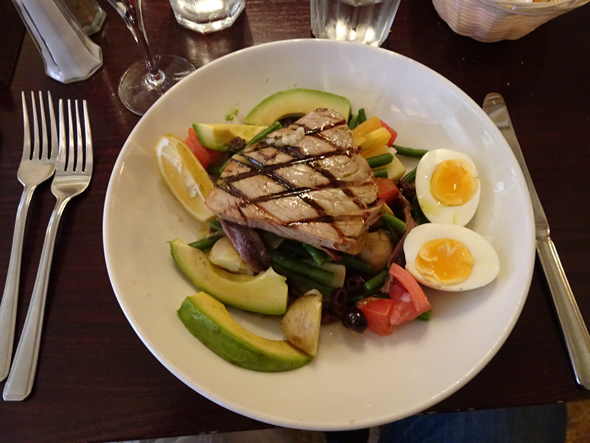 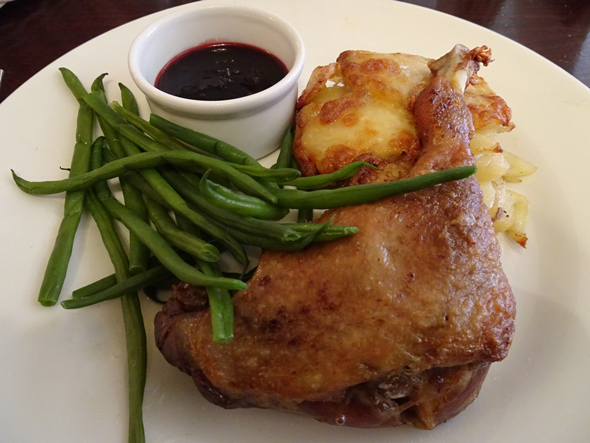 After lunch we had time for DT to do his twice-daily physical therapy exercises and icing, and there was time for a short nap before heading back to Queen Elizabeth Park and London Stadium for Day 5 of the 2017 IAAF World Athletics Championships. 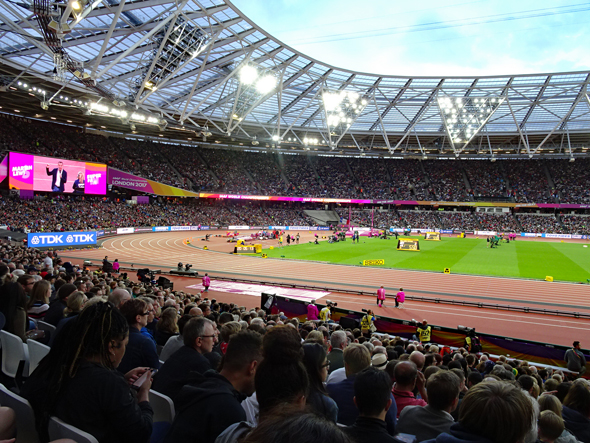 The weather was dreary. Chilly. Cloudy. It did not rain. 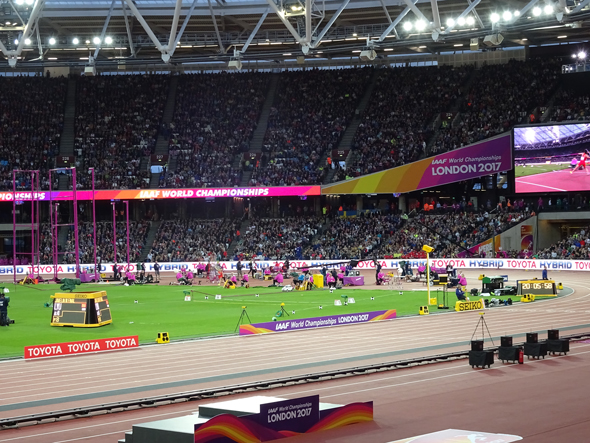 Again, the stadium was full and the crowd loud. There were finals tonight in the women's javelin, men's steeplechase, pole vault, 800m and 400m. The fans cheered wildly as the women's javelin competition heated-up. Spotakova (Czechoslovakia) won, with Li and Lyu of China earning the silver and bronze.

American Evan Jager took the bronze medal in the steeplechase. After leading much of the race, he was bested by Kipruto (Kenya) and Elbakkali (Morocco) on the home stretch.

No one was surprised when South African sprint sensation, Wayde Van Niekerk on the 400m final. This young athlete, famously coached by an elderly (great-grandmother) woman, won the 400m gold medal in Rio and is the current world-record holder at 43.03. Can you even imagine running one lap around a track in 43 seconds? Van Niekerk (van-nee-kirk) took gold tonight in 43.98. American Fred Kerley finished 7th, 45.23.

Everyone was surprised when Frenchman Pierre-Ambroise Bosse won the 800m. Maybe even Bosse? 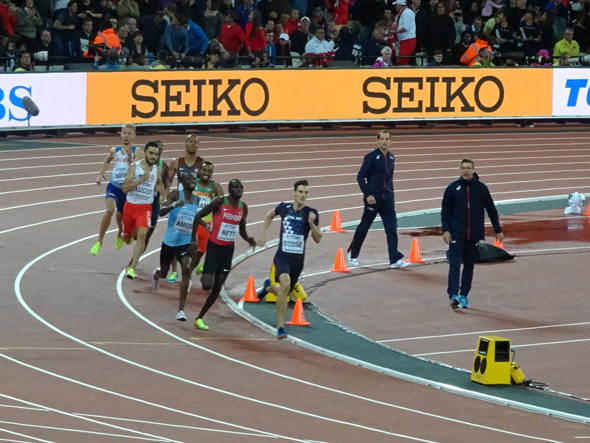 Even his countryman, pole vaulter Renaud Lavillenie (in blue sweat suit, white shoes) was watching as Bosse took down a very talented field of two-lappers. 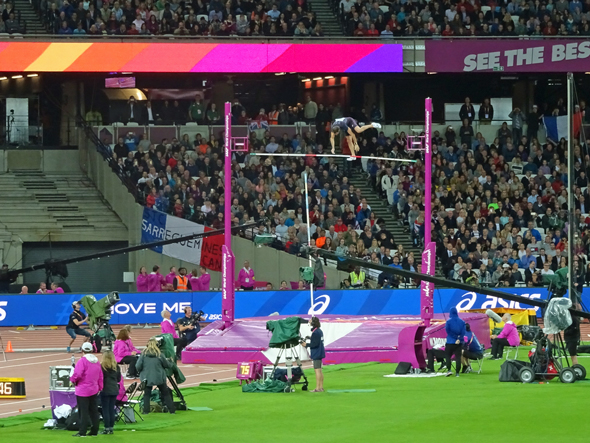 Lavillenie in the pole vault

The pole vault was another exciting contest this evening - with the entire stadium riveted to see if the popular world record holder (and new father), Lavillenie (6.16m), could best younger challengers. He could not. American Sam Kendricks, who applauds his fellow vaulters during the competition like he had pompoms, brought home the gold this evening, clearing 6.01m (19.71 feet). Piotr Lisek of Poland was second. Renaud Lavillenie won bronze. I suspect the 60 degree temperature was a big part of the pole vault competition this evening.

There is a bit of controversy, gossip and media coverage about norovirus that has taken over a hotel, sickening several athletes. The Canadian team has been especially hit hard. Some athletes are rumored to be under quarantine. The British Public Health stopped 400m racer, Isaac Makwala, (Botswana) from entering the stadium tonight. Makwala was not allowed to race in his 400m final because it was determined he had a fever and/or had not fully recovered from his norovirus attack. Makwala is calling BS. Another athlete, Thomas Barr of Ireland, did not run his 400m hurdles semi-final Monday because he was ill with the virus (his decision), and a Canadian marathoner, Eric Gillis, had to drop-out at the 20-mile mark due to the illness.

Until my next update, I remain, your germ-freak correspondent.