London, England:  Today's report should carry a sub-title of "Cheers, Jeers and Tears". There were two sessions at the track today, so Dave, Steve, Dan, and I went over early to watch Ducks Ariana Washington, Deajah Stevens, and Devon Allen in their heats. It was a warm sunny day and quite a large crowd had gathered on this Sunday morning. 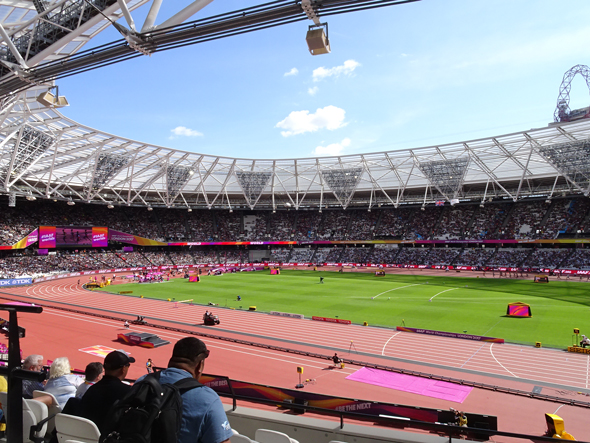 Dave also wanted to watch American Evan Jager in the steeplechase heats. I did not. I love the talented Mr. Jager, but the steeplechase is just not one of my favorite events. Well, I certainly enjoy it more than race walking (which I completely boycott).

Evan Jager (above in blue, just clearing the barrier) won his heat. Then Jager had quite a time of it passing through the press gauntlet. Every reporter wanted a few words with the popular, handsome athlete. 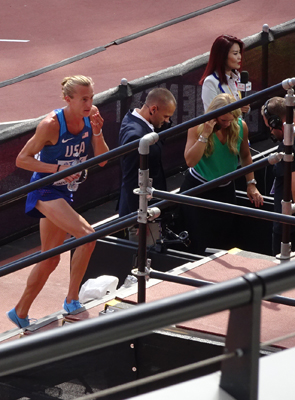 Love me some man-bun. 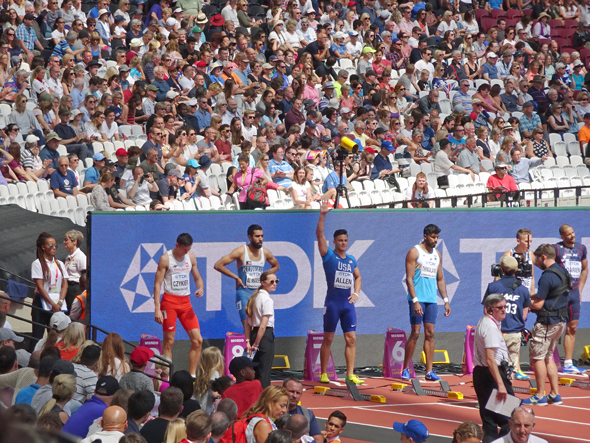 Duck alum Devon Allen had a great heat and advanced to the semi-final later tonight. The announcers must not have an updated version of his bio. Allen was introduced as a University of Oregon wide-receiver, who will be returning to school to play football for the Ducks in the fall. Oops. Devon Allen has graduated, has signed a contract with a shoe company (NIKE), and is a professional track & field athlete. No more green and yellow uniforms for Devon Allen.

After the morning session, we took the train back towards the hotel, stopping to have lunch. Again, food is becoming an issue. No breakfast, save coffee. We eat lunch, and then it is too late for dinner when we get back from the stadium in the evening.

Today we had fairly decent pizzas and a wonderful salad - a ball of fresh buffalo mozzarella, served with arugula and dried smoked tomatoes. Smoked! They were so yummy. 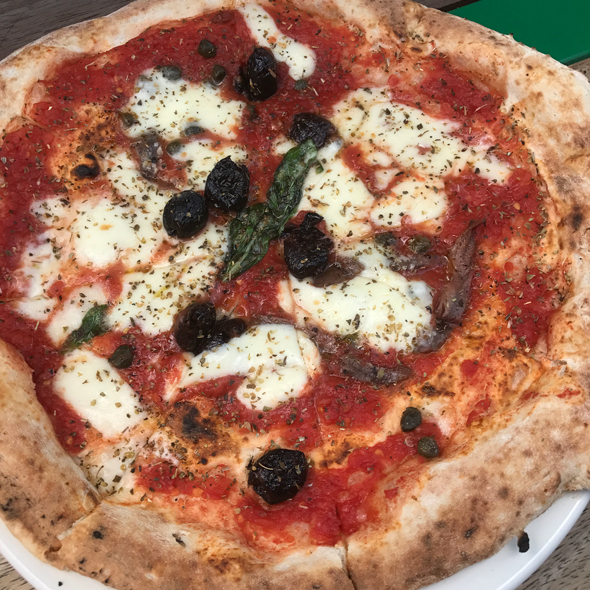 The pizza had smoked (again, smoked) anchovies and kalamata olives.

After lunch, we went back to our hotel room to watch the women's marathon on television. Tamra and Carolyn had gone down to the Tower Bridge and were able to see the end of the men's marathon and the start of the women's on the Tower Bridge. How fun - plus they had a nice lunch in a proper pub. I kept dozing on and off during the marathon, so was rested when we returned to London Stadium for the evening session.

The session started with medal ceremonies. Not only are medals given for the events completed during these games, the IAAF are handing-out medals from previous games where a medalist has been later caught cheating (performance enhancing drugs), their medal has been taken away, and now given to the 4th place finisher. (Or sometimes meaning the original silver medalist becomes the gold medalist, the original bronze medalist becomes the silver... and... well, you get the scenario.) Bumped-up, so to speak. Drug cheating ruins my sport. When I am in charge of the IAAF, I will install a one-and-done policy. I promise.

Speaking of drug cheats, the powers decided to hold the 100m medal ceremony very early in the evening, instead of the scheduled 8p. They must have figured the boos from a fully-packed stadium would not sound good on world-wide television. 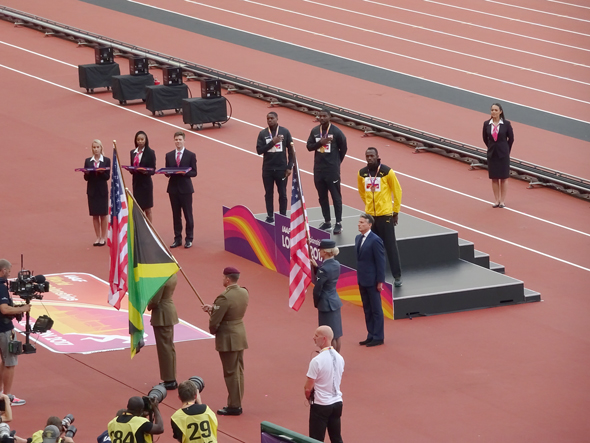 Their scheme did not work. The third-place finisher, Jamaican Usain Bolt, was introduced first to roaring crowds. Deafening. I am pretty sure this is the first bronze medal for Mr. Bolt, but he accepted it as elegantly as if it were made of diamonds and smiled his famous grin. Second-place finisher, American Christian Coleman, also was wildly cheered. When the gold medalist, American Justin Gatlin, was introduced the crowds booed and hissed like mad. (I did not boo, because I was standing near IAAF officials in the hospitality area.) The crowds were respectful during the playing of the US national anthem and then the entire stadium erupted in a "Usain Bolt, Usain Bolt, Usain Bolt" chant. 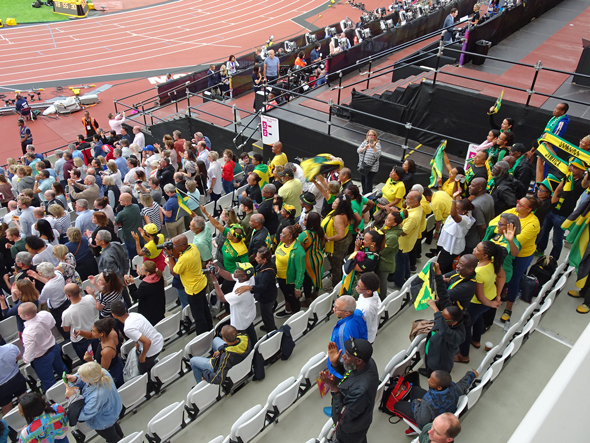 Bolt show-boated for the crowd, making his famous "lightning bolt" stance, grinning and posing for the hordes of press photographers. The press pool basically ignored Gatlin.

And then the races began, and the cheers turned to tears for Oregon fans. Duck 100m sprinters, Ariana Washington and Deajah Stevens failed to advance to the final. Both girls ran over 11 seconds. Stevens was last in her heat. Not typical for these two dynamites. Dave and I were so disappointed, but we may see the Duck sprinters again - both are in the relay pool.

Then Devon Allen raced again in his semi-final heat - above in blue - with both arms raised during his introduction... again as an Oregon wide-receiver. Egads. 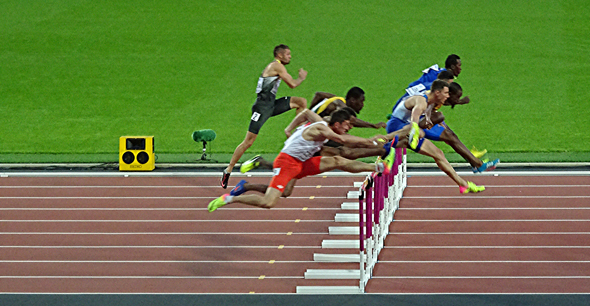 Allen looked good, but he ran in a slow heat and did not advance to the final, finishing 9th overall and only the 8 fastest hurdlers race in the final. Aries Merritt will represent the US in the 110m hurdle final tomorrow night.

A bad day for the Ducks.

Until my next update, I remain, your plucked correspondent.