London, England:  We are already wondering how this is only day two of the competition? We love the races and field events, it is just the traveling back and forth, security lines, etc., that can get to be a grind. Especially if walking with a knee brace and carrying a walking stick. (It is now a "walking stick". In England a cane is something once used to swat unruly children, so DT now carries a walking stick. In case you were wondering, in Austria he carried a gehstock, literally a go stick.)

We have six seats together at the stadium with old Oregon friends Steve & Tamra and Carolyn & Dan. Steve, Dave and I took the train over to the stadium this morning to watch the morning session. Tamra met her London cousin for lunch. Carolyn and Dan did tourist-type activities as this is Carolyn's first visit to London.

University of Oregon Ducks, Ariana Washington and Deajah Stevens, raced in the 100m prelims this morning. Both women advanced. (I am sorry to report Ms. Stevens has decided to turn professional, so will give up her final year of eligibility at the University of Oregon. She will, happily, remain in Eugene to train and finish her degree. 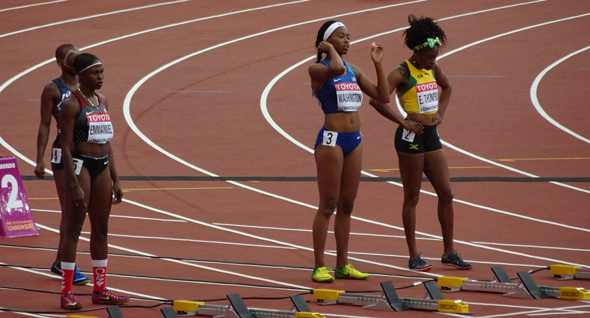 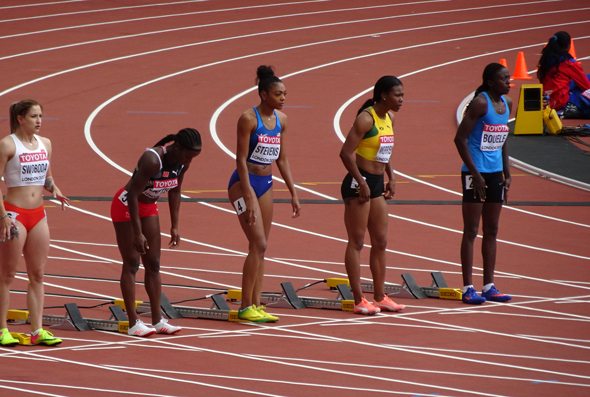 US sprint superstar, Tori Bowie, also qualified for the semi-final by winning the third heat. All three American sprinters will race again tomorrow.

All four American men shot putters qualified to move on to the second round as well, including Oregonian (but a Longhorn) Ryan Crouser. The heptathlon is shaping-up to be a very tight nail-biter, with the UK's Katarina Johnson-Thompson an obvious crowd favorite, while getting strong competition from Yorgelis Rodriguez (Cuba) and the very popular Belgian, Nafissatou Thiam. It's not often you see a packed house for a morning session and rarer still to see the entire stadium standing, clapping - and not going home - to see the conclusion of the heptathlon high jump.

Especially since it was raining. Pouring. With the opaque overhangs, the fans remain dry. The athletes get soaked. 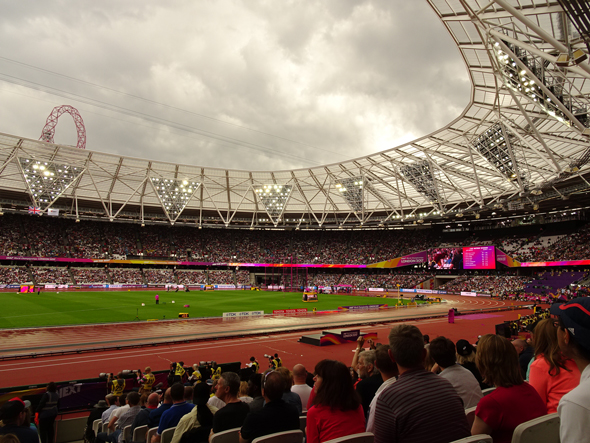 Thunder storms as well! Not sure if the thunder was epic, or if it echoed in London Stadium, but it was frightening. When the morning session concluded, luckily between downpours, Dave and I went back to the hotel on the train and had lunch at a nearby restaurant. 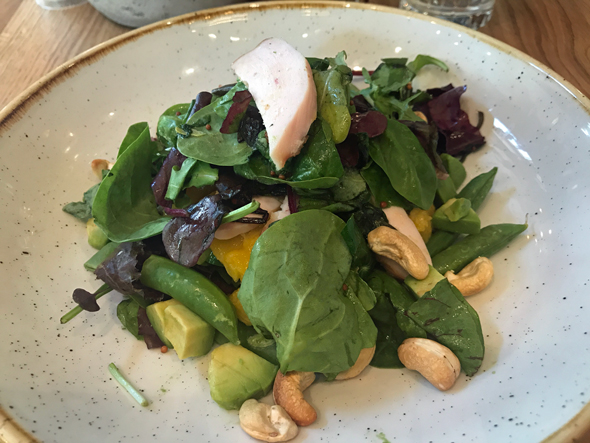 Not fish and chips this time, but a healthy salad with mixed greens, mango, cashews, avocados, pea pods and smoked chicken. Salad was good; service was terrible horrible non-existent. The restaurant will remain unnamed on this blog.

Dave and I tried the shuttle bus offered to accredited IAAF members and guests to reach the stadium for the evening session. This bus leaves the front door of the hotel and drops passengers at a back entrance of the stadium, reducing the number of steps my hobbler takes to reach his seat in London Stadium by 90%. The bus also takes less time than the walk to the train, the train ride and the walk from the train station to the stadium. Obviously his best option. Dave will take advantage of the bus if their schedule (it isn't a constant back-and-forth bus) fits with his. 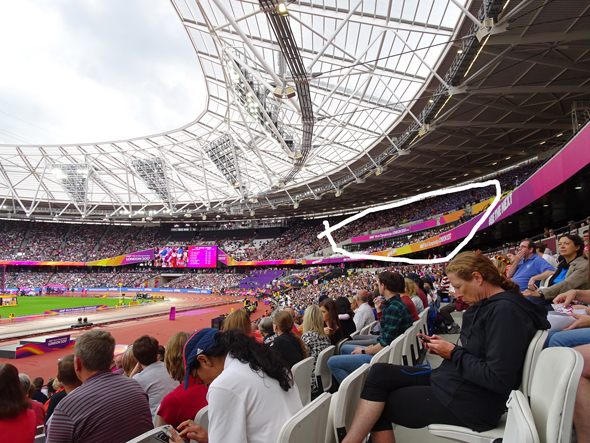 Here is a view from our seats in the stadium. We also have access to the circled area for IAAF hospitality (i.e. drinks and food). 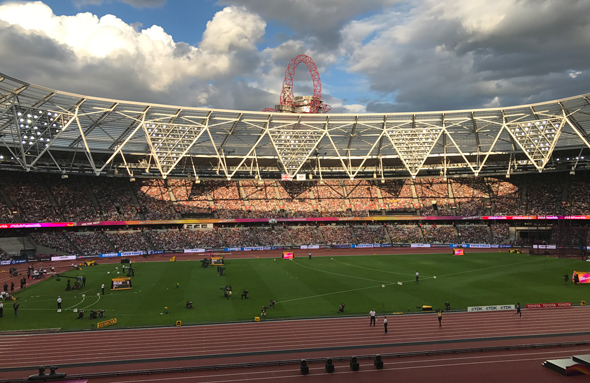 It was no longer raining, but the skies were not exactly friendly. No matter, there was enough electricity in the stadium with frantic fans ready to watch Usain Bolt win the 100m final.

But right before the race, a naked man ran out onto the track! A streaker. A big, burly streaker. Hilarious. We wondered what type of bet this bear had lost? See photos here. I guess it isn't funny, but it was. 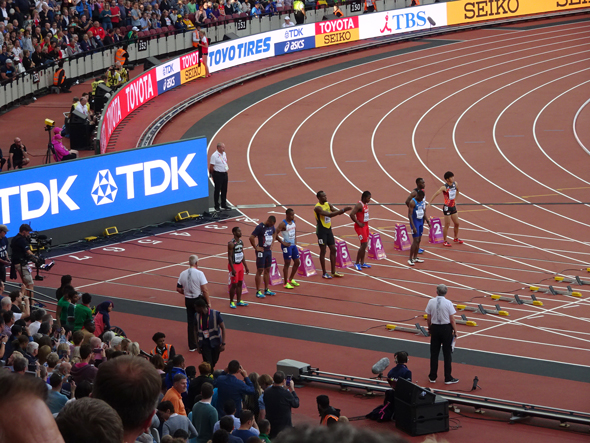 Bolt (in yellow) lines up and is introduced to his fans 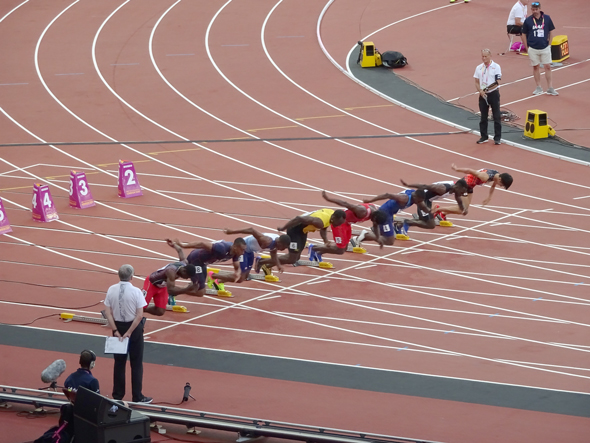 A men's 100m final isn't going to take 10 seconds. It goes by fast. Too fast for the amazing Usain Bolt. He finished third behind Justin Gatlin and Christian Coleman of the USA. The crowd were shocked. I am going to assume Mr. Bolt was not shocked. (Dave thinks Bolt was shocked to lose.) He knew his days were numbered and had already announced he was retiring after this meet. I am personally sorry young Christian Coleman did not win the race. Gatlin races clean now, but he is a convicted (TWICE!) drug cheat and it is very difficult for me to give him support... even though we are friendly with his parents and they are sitting right in front of us. Justin Gatlin is loudly booed every time he enters the stadium and any time he is introduced. I can't imagine how the boos make his parents feel. Cheaters gonna cheat.

So Mo Farah's last race on the track was a swan song and Usain Bolt's last 100m was a flop. The sport will truly miss Mr. Bolt. With his impressive talent, amazing smile and big personality, he brought a new interest and new fans to track and field.

One last thing - we met a girl on the return train ride wearing this sweatshirt: 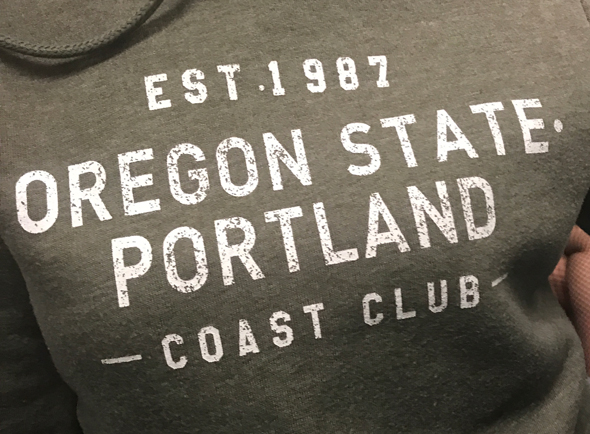 It was very confusing to us. Oregon State is in Corvallis. No where near the coast. OSU was founded in 1868. She said she bought it locally. We told her to sell it for $1000 on eBay.

Until my next update, I remain, your unbolted correspondent.