London, England:  Dave and I were invited to join the University of Oregon Foundation for a private tour of the British Museum with University President Michael Schill this morning. Our guide, a local professor who has been teaching Oregon students studying history abroad, gave about a dozen of us a fly-by look at some of the most important pieces in the museum collection. We did see the Rosetta Stone, but it was like looking at the Mona Lisa - huge crowds - so go here to see a good photo and learn more. 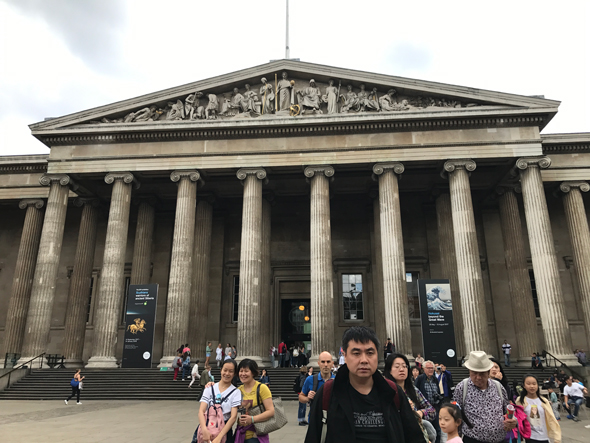 Outside the British Museum 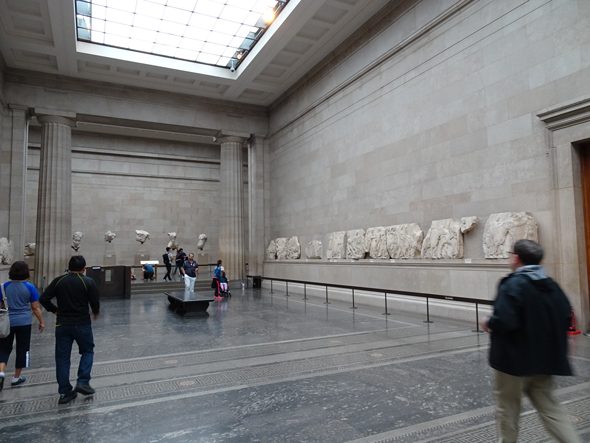 The British Museum has marble pieces from the Parthenon in Athens. Though originally built as a temple celebrating Goddess Athena, the Parthenon was later used as a church and as a mosque before it fell to ruin. When the Parthenon blew up (because it was being used for gun powder storage!) in the late 1600's, large chunks of the marble decorative frescos and statues were strewn about and rescued (or possible stolen?) by England's Lord Elgin, from 1801-05. (Elgin was the British Ambassador to the area.) Now the marble pieces remain on display in the British Museum. No matter which country may own the sculptures, they are being well cared-for in London. More photos: 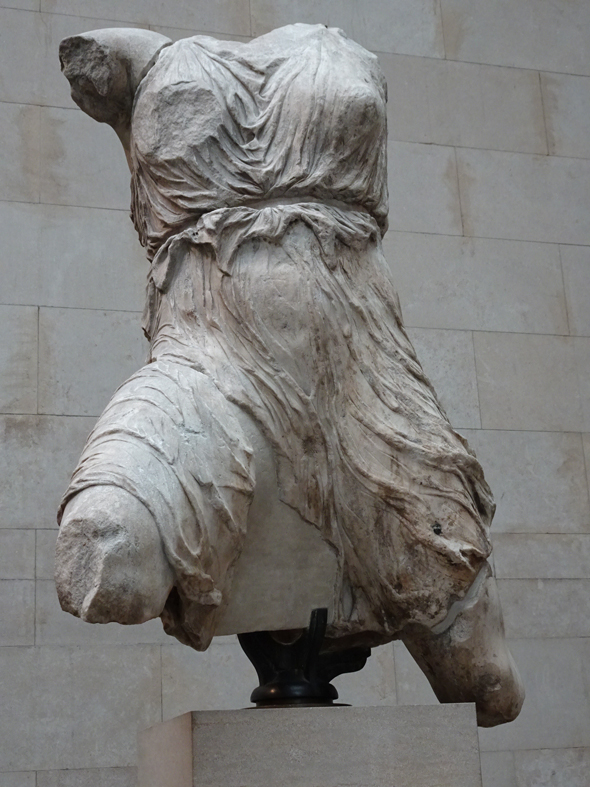 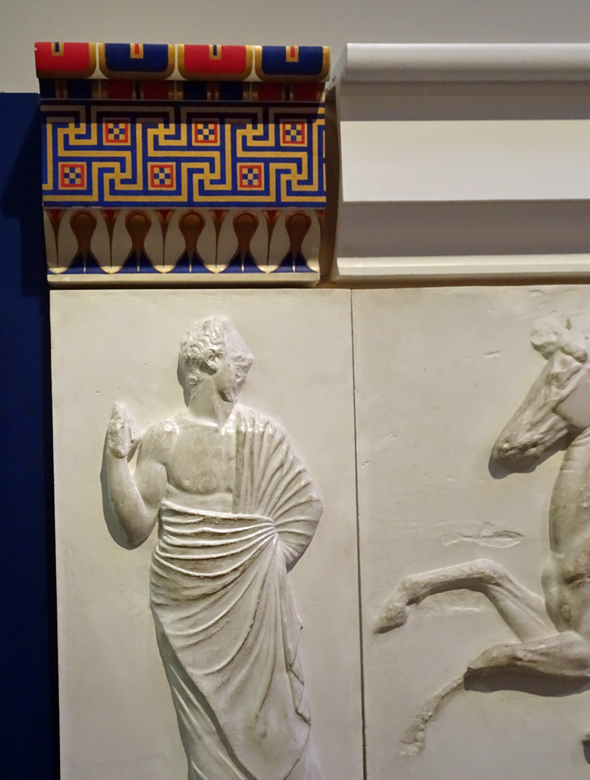 The British Museum houses a vast collection of intricate 13th-century sculptured bronze plaques from the Benin Kingdom (now Nigeria) depicting Benin and Portuguese soldiers. The wax-casting technique was so specialized, it was difficult for many Westerners to believe the work was completed in Benin, giving a new appreciation to African art around the world. 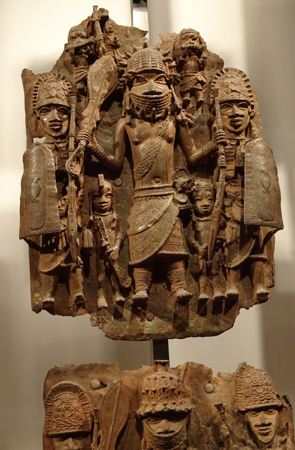 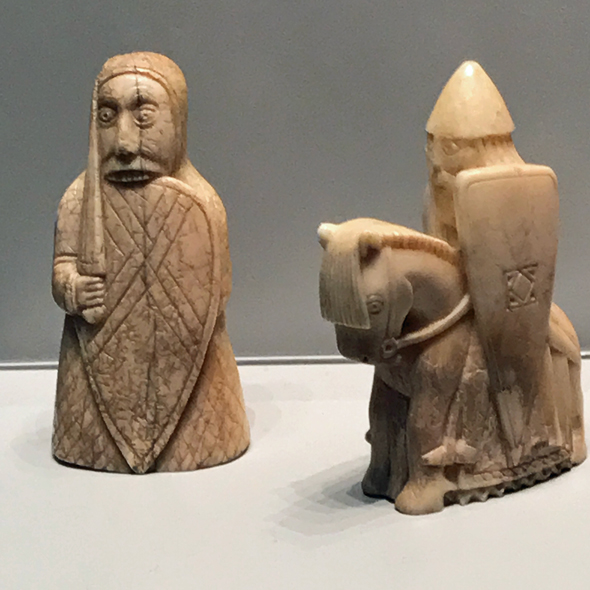 Lewis Chessmen: Chess pieces carved in (probably) Norway in the 12th century from walrus ivory,
found in Scotland in 1831. 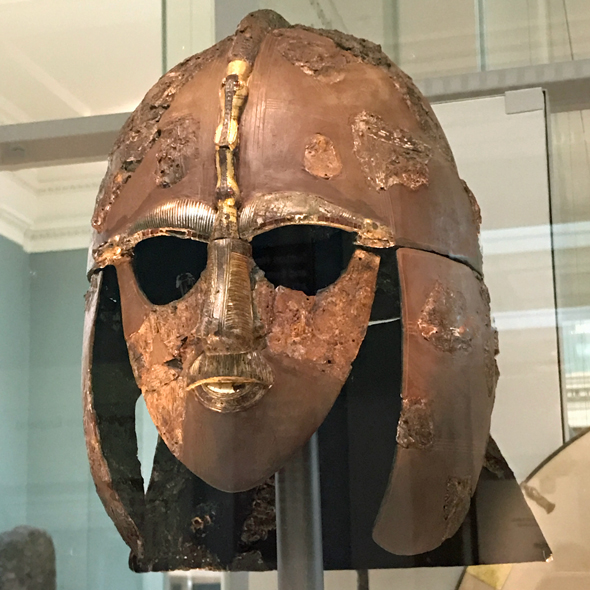 Sutton Hoo Helmet: this Anglo-Saxon helmet dates from AD 600 and was found in a wooden ship-shaped burial chamber mound in Suffolk, England. It was found shattered, and later reconstructed. The helmet's mouth, nose and eyebrows form the image of a flying beast.

After the tour, we had a few minutes to purchase postcards, then walked around the corner for luncheon with the President at Truckles of Pied Bull Yard. You may not be surprised we had fish & chips. 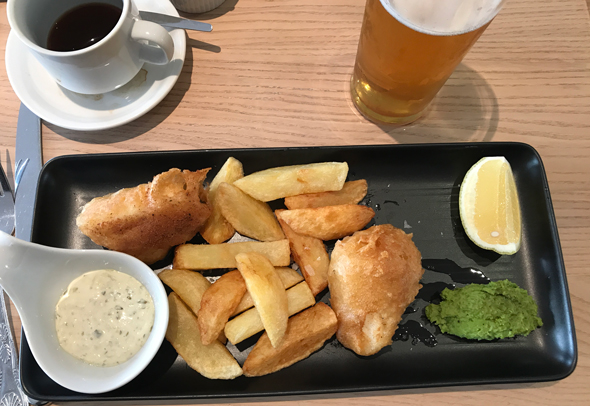 We had taken the Tube (underground, subway) to the museum, but decided to Uber back to the hotel after lunch. There are far too many stairs for My Driver and his cane to deal with on the Tube, as not every station has an elevator. I must say though, people are very accommodating to people with a walking stick. Strangers gave up their seats on the trains for him. (When we arrived to Heathrow yesterday - to very long lines at immigration - a staff person came and escorted us to the front of the line.) After a rest, we headed over to London Stadium, home of the 2012 Olympics, for the first day of the World Championships. 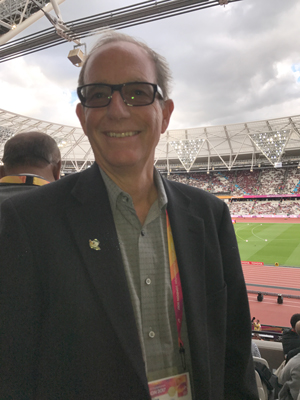 We took the train to the track because it is just a few short stops and both points have elevators. It was still quite a long walk and - I kid you not - someone called for a shuttle van to drive DT (and me) to the door. It's like being a rock star. A really old rock star. With a bad knee. And a cane.

Our first stop was to the IAAF hospitality to see who we could see and get a lay of the land. Because the University of Oregon will host this very meet in 2021, there is quite a large contingent from Our Great State - from the University, the Governor's office, Oregon travel and tourism staff and most of the TrackTown USA staff. (DT is Chairman of the Board of TrackTown USA.)

London Stadium is beautiful and huge! The weather was perfect for racing this evening. The Opening Ceremonies were nothing much more than a few audience participation schemes and speeches by IAAF Chair Sir Sebastian Coe, The Duke of York (Prince Andrew), and the Mayor of London, Sadiq Khan. Mayor Khan declared London "open to all, no matter the color of your skin, the color of your passport, or color of your flag". 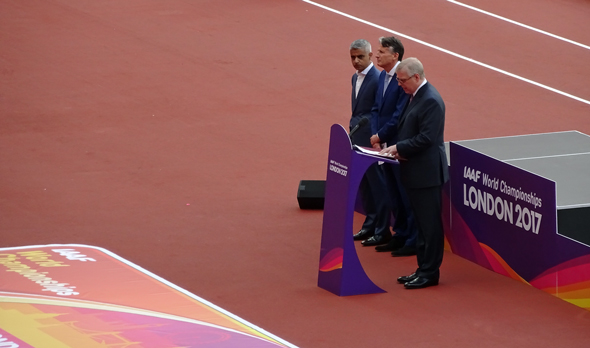 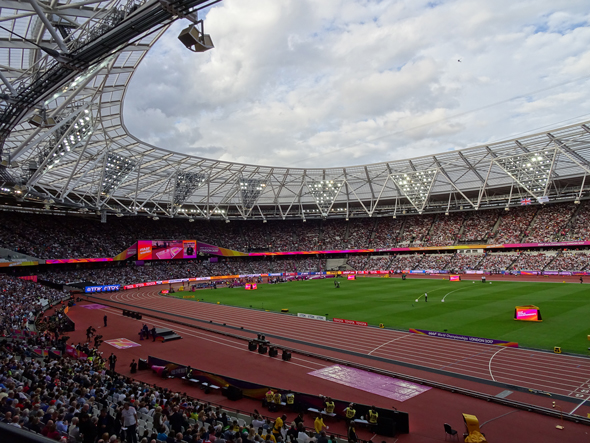 Dave and I were in our seats by the first race. There were a lot of preliminary heats today on the track and on the field. (As usual, I will not report on everything. I am not a sports writer, but a RV travel, lifestyle, and food blogger. This blog will highlight the events I find interesting. However, there are links to the official results at the bottom every page during the championships.) 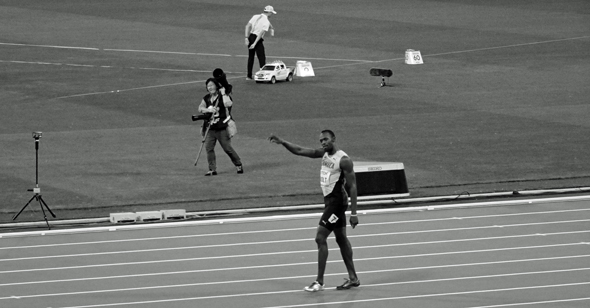 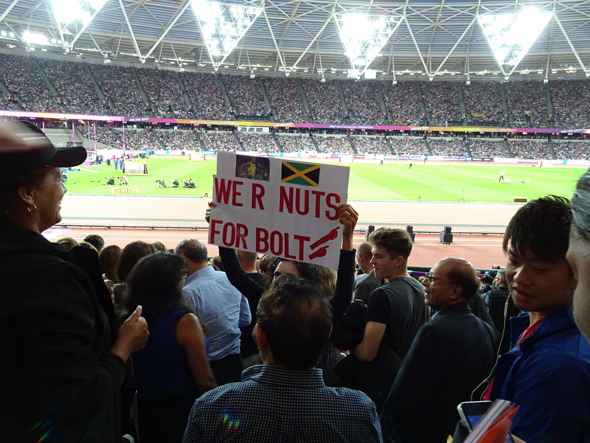 Jamaican fans in front of us tonight 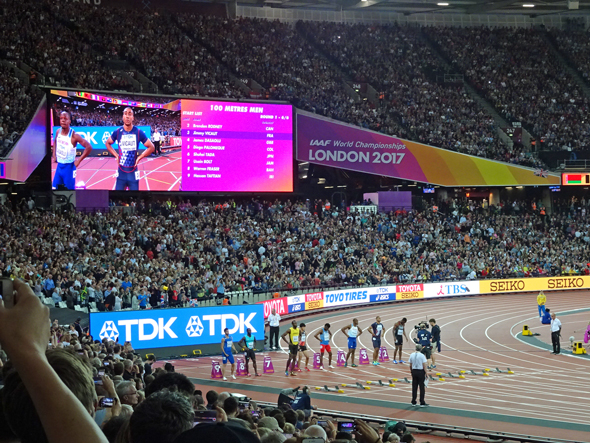 As much as the crowd loves Usain Bolt, everyone (and I mean everyone in the completely sold-out stadium) wanted to see Great Britain distance sensation, Mo Farah, in his last 10000m race. After these games, Mr. Farah will move on the road racing. Tonight would be his last six-miler on the track.

Early in the race: Mohammed Farah in the middle of the pack, in white. 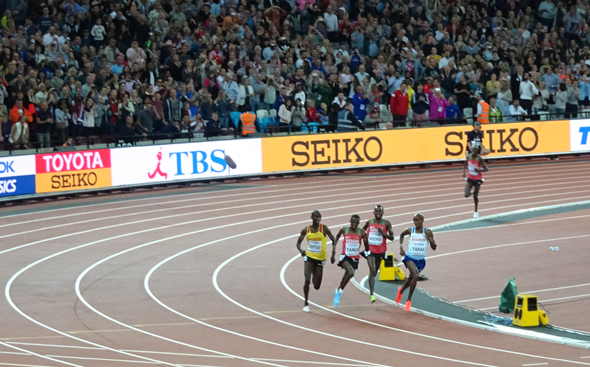 Mo played with the runners and he played with the crowd (as he did in Eugene at the Pre Classic), waving to the masses to cheer louder for him. What a character! Of course, he won. It would not have been polite of someone to beat Mo Farah in his final 10000m in his home town. 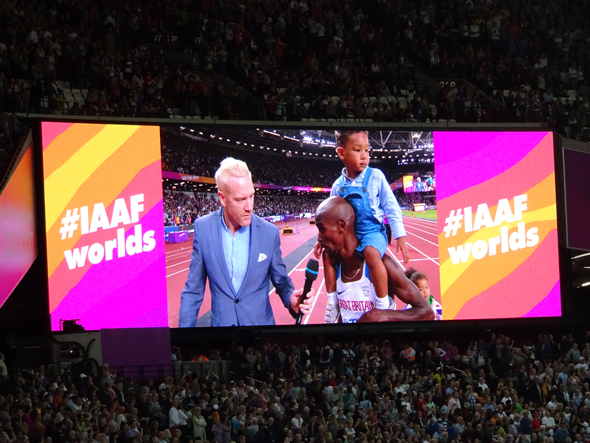 Mo Farah on the in-stadium screen 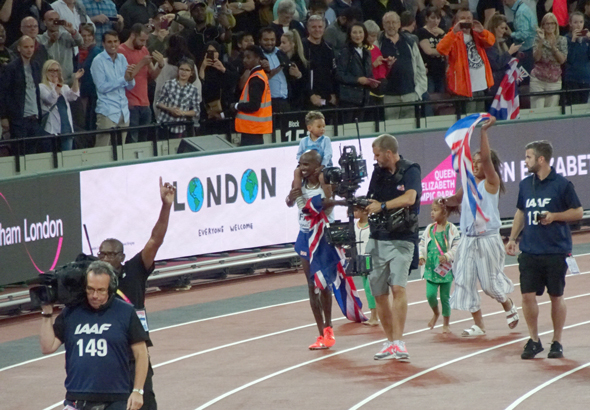 Mr. Farah took his victory lap with his four children

Oregonians are going to miss Mo Farah as well. Though he is British, he lives and trains in Portland. Now he will be moving back to England and we will no longer see him jogging around town. Insert sad face here.

After the meet, we went to an after-party with our friends and then came back to the hotel on the train. One down; nine to go.

Until my next update, I remain, your long distance correspondent.

« The Best Strudel + On to London IAAF WORLD CHAMPIONSHIPS | Day 2 »