How to Make a Decent Pizza

We were so tired after returning home yesterday afternoon from Eugene, we both fell asleep on the sofa. Very unusual for us. And not for a little cat nap either. We slept for 90 minutes! (I blame our exhaustion on sitting in the sun for three hours at the track meet.) Anyway, when we woke up, it was 7p and we both felt so groggy.

I ventured into the kitchen to prepare dinner. I had planned to prepare Sausage & Kale Dinner Tart from My Pantry Shelf, but in my fuzzy state, the thought of preparing a pie crust, a savory filling and then baking the tart, was just a bit more than I could handle at the late hour.

Plan B: sauteed Italian chicken sausage, kale, onion and basil - tossed with penne - and a Caesar Salad on the side. Including time to boil the water, the entire delicious repast was on the table in less than 30 minutes. (Of course, we watched the Pre Classic track meet again - via our DVR - after dinner.) 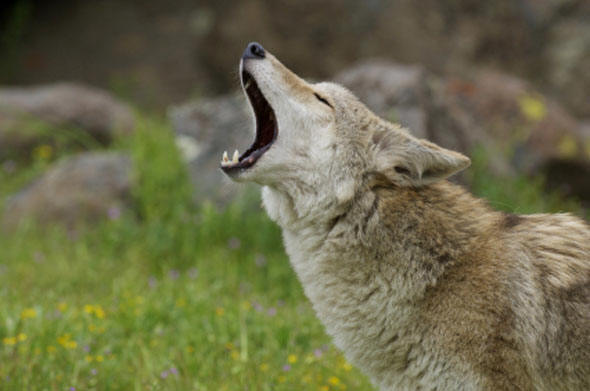 Good thing we had that nap too, because we were awake on-and-off all night with howling, yapping, snarling, barking coyotes racing around outside. I have no idea what was going on in the forest behind our house. From the sounds of things, I think the coyotes may have chased-down and killed Sasquatch.

My impromptu cooking last night left me with an unused carton of ricotta. The only things in the veggie bin were a little broccolini, two stems of basil and an onion. I also found a little shredded mozzarella that needed to be used pronto or tossed. Time to be creative or time to go to the grocer. I am lazy. Pizza?

Since I am so lazy, yet so organized, lately I have been making a pizza dough that brews away all day on the counter:

The water, salt, yeast and olive are whisked together in a large glass bowl, and then I use a rubber spatula to stir/knead-in the flour. The bowl is covered and the dough slowly rises all day. Today I made the dough at about ten o'clock.

If you are even lazier than me - use a store-bought dough. Grab a package from Trader Joe's - or buy some from your local pizza joint. 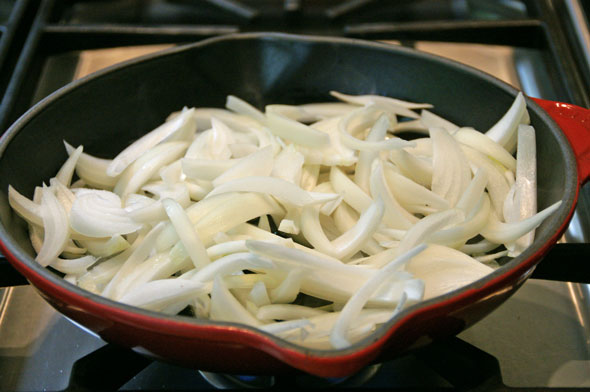 I slivered one yellow onion and caramelized it in a little extra virgin olive oil. (No, I do not add sugar.) I used my new 9-inch cast iron/enameled skillet from Le Creuset. 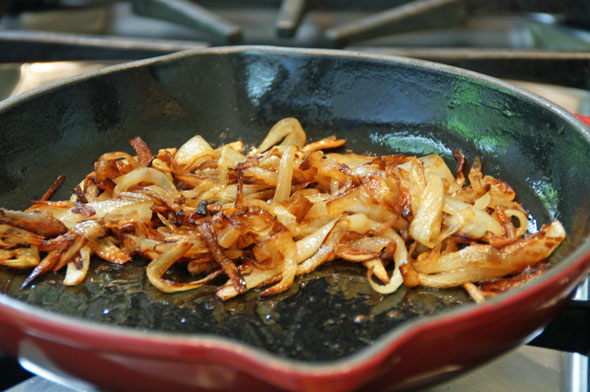 After twenty minutes of stirring, I added one slivered garlic clove. I would have added more, except this particular clove of garlic was about the size of a Volkswagen. Another ten minutes and the mixture was a sweet base for our pizza. (Notice how nothing sticks to the new skillet? Love it!) I also blanched the broccolini and whirled chopped basil into about a cup of the ricotta with my mini-chopper. 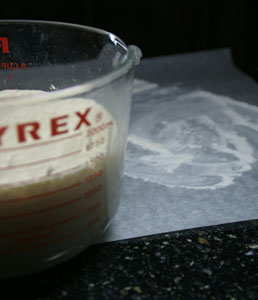 That was a lot of work and I hadn't even made the pizza yet! Wouldn't most sane people just order a pizza to be delivered to their house? That would have been a good idea, except we live so far from civilization the only companies who deliver are the post office, FedEx and UPS.

By 6p, the pizza dough is really puffy. I dusted a sheet of parchment paper with flour and, using a spatula, turned the dough out onto the floured parchment paper. Why do I do this? Read above. I am lazy. Plus, I have a really hard time getting pizza dough off my wooden pizza peel and onto a hot pizza stone in the oven. So, I cheat. 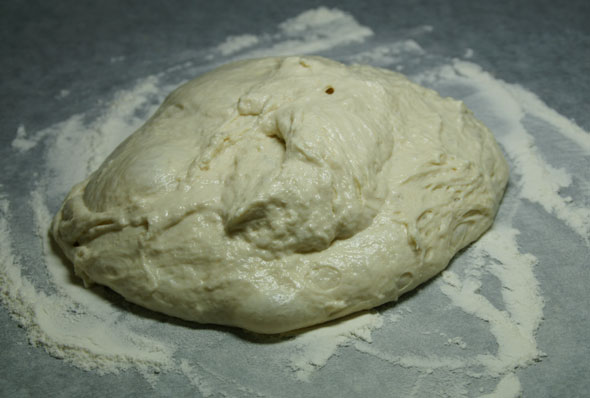 I urge you to cheat too. I use floured hands and a floured rolling pin to shape the dough to a 12-inch circle (because I have a 12-inch pizza stone). I use scissors to remove the over-hanging parchment paper - but - I keep a little corner piece of the paper to use as a handle to easily pull the pizza off the pizza stone. 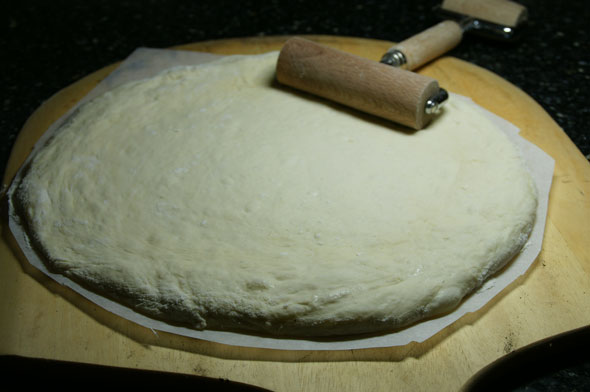 Now the dough just sits on the counter for 30 or so minutes to raise/puff again. This is a good time for a cocktail on the front porch with Your Beloved while the oven and pizza stone heat to 500° (or as hot as your oven will get).

This pizza dough recipe will make enough for two thin 10-inch pizzas, or one 16-inch thin crust pizza or one fairly-bready 12-incher. I am too cheap to heat two ovens and far too lazy to make two pizzas, so I made one 12 inch pizza. A key step in making a pizza is to put the un-dressed dough in the hot oven for about five minutes before topping the dough with your desired toppings. (If you don't have a pizza stone, use a 450 degree oven and slide the dough/parchment paper onto a heavy baking sheet.)

After five minutes, take the partially-baked pizza dough out of the oven and QUICKLY brush the top with olive oil or red sauce - and then top the pizza with ROOM TEMPERATURE toppings of your choice. 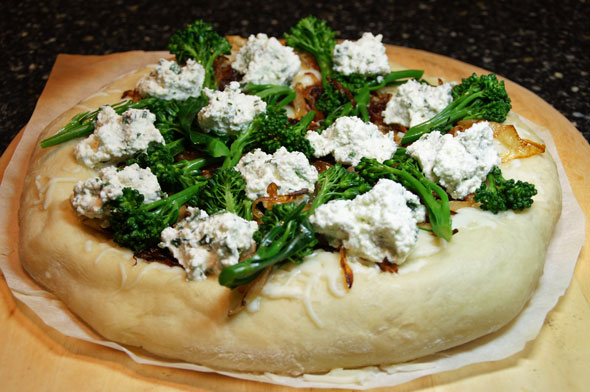 I brushed this partially-baked dough with extra virgin olive oil, then sprinkled a little shredded mozzarella over the crust and topped it with the caramelized onion, broccolini and blobs of the ricotta/basil mixture. The pizza was returned to the 500° oven and baked for an additional ten minutes. 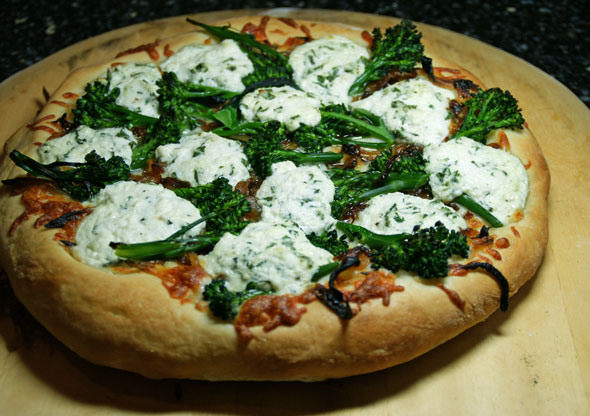 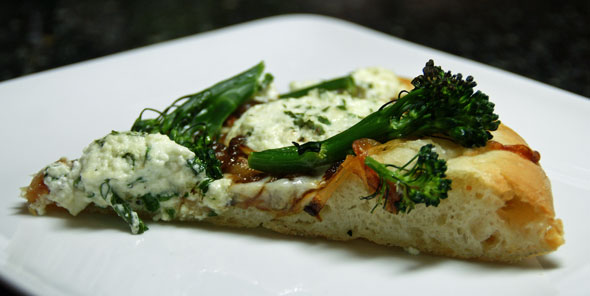 The onions were very sweet and the ricotta and broccolini were very savory - a good combo.

Maybe you don't want a broccolini and ricotta pizza with caramelized onions. Who could blame you? Maybe you want pepperoni. Go for it. Hopefully you can use a few of the techniques and tips provided here to make a better pizza. 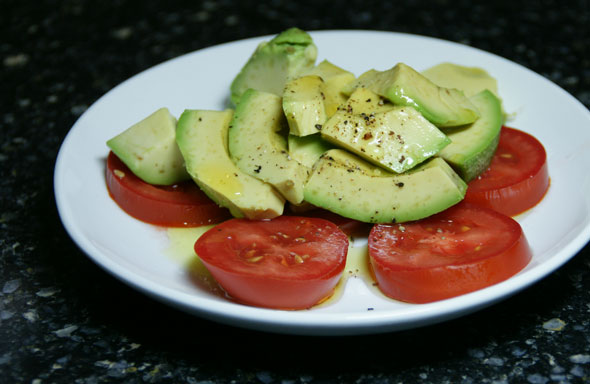 And don't forget to serve a fresh salad with your pizza!

Until my next update, I remain, your "I need to go to the grocer" correspondent.
« 2011 Pre Classic Friendly Reminder »