Portland, Oregon: Again, the last RV to leave the campground this morning, we drove north on 101, through Lincoln City, where we took a right towards Portland, and home. Foggy. Cold. Rain.

A crazy thing happened last night just before midnight. A huge black pickup, with a very loud engine, came screaming into the RV park. Windows open. Music blasting. People inside singing along to the tune – oddly, the theme song to the Titanic film, My Heart Will Go On, performed by Celine Dion. The truck passed through the unoccupied site next to us at a very fast speed, then came to a stop behind a motor home a few sites down from us. Still blasting, still singing. I assumed they were dropping-off a passenger, but the doors remained closed. The song came to and end, and the truck roared away again. Thanks for waking us all up, you jerk.

And now I can’t get that damn song out of my head.

We drove home without stopping, arriving at 2p, just as our housesitter was leaving for a weekend of camping on the rainy Oregon coast. In a tent. The past few years, DT has been taking the motorhome directly to the storage garage, and we make a few trips back/forth to return everything where it belongs when we are not in the bus. This year, with his bike taking up the entire back of the Jeep, it was a better plan to bring the bus to our house – to the not straight nor level driveway.

This house was built when our RV was a VW Westphalia.

If you may recall, we had our bathrooms remodeled while we were away, so we not only had to bring our clothing and toiletries to the master bath from the RV, we had to return everything to the master bath, as all bath furnishings were stored in Lisa’s childhood bedroom during the remodel. Towels. Trash cans. Laundry baskets. Bins. You know – all the stuff that goes in a bathroom. Dave and I were blown-away at the first sight of our new fancy bathroom, which had not been updated in 25 years. This remodel was long over-due. We also had new carpeting installed in the master bedroom, walk-in closets, and on the main staircase. It will take us several days to get everything situated to our liking.

The guest suite also received a new bathroom, and the powder room has a new light, faucet, mirror, toilet and fixtures.

Finally, at six o’clock I decided enough was enough. Our clothing and toiletries had been brought in from the motorhome. The refrigerator and pantry as well. It was time to stop. Time for dinner. Time for a glass of wine. I scrounged around and decided I had everything on hand to make a tuna noodle casserole. Old school. Satisfying, and just the right amount of carbs after we had gone up and down countless flights of stairs with our arms loaded. About the time the casserole was going in the oven, I realized our clocks had not set after the last time-change, and it was indeed 7p. 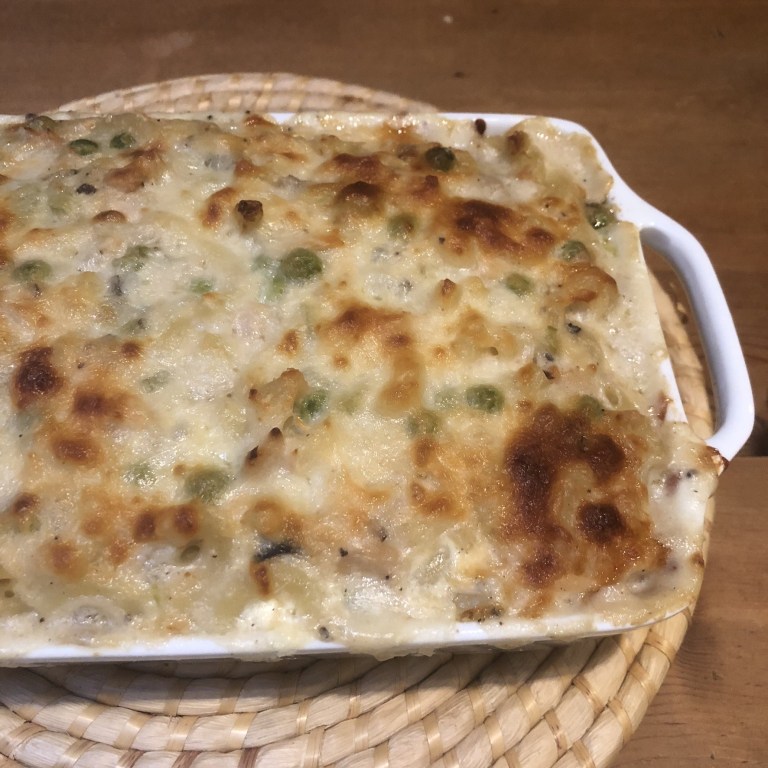 I added a bit of frozen peas because I had a bit of frozen peas, but could not remember if My Mom put peas in her tuna noodle casserole. I didn’t use a recipe, but did cheat with a box of Pacific Foods Cream of Mushroom Soup. I deserved a little shortcut at meal-prep time tonight. Salad? A few sliced tomatoes was our salad tonight.

I will try to update with a few photos of our pretty new baths soon.

Until my next update, I remain, your Home Again correspondent.