Los Angeles, California: Little Leo is home! Not without a considerable effort, I must add. Checking out of Cedars-Sinai must be more difficult than being released from prison. So many papers to be signed, so much security, so much stuff to haul down to the car(s). Staff check and double-check, then triple-check, Lenn & Lisa's wristbands, match them up with Leo's and then - at the last minute - the tracking device is snipped from Leo's ankle and they were free to leave the hospital. Lisa's SUV and our rental car were loaded down with flowers, diapers, clothes, gifts, supplies and other assorted paraphernalia associated with giving birth. We thought our load was ridiculous, until we witnessed a family leaving with twins and realized we had N O T H I N G ! 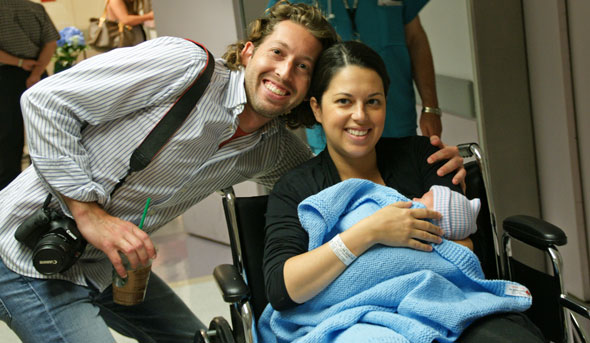 The new family leaving the hospital! All smiles. Very tired, but very happy. My Mom knit the blue blanket for Lisa before she passed away last year... for the time her eldest granddaughter would meet a nice man and start a family. My Mom was smiling down on Little Leo today! Precious. 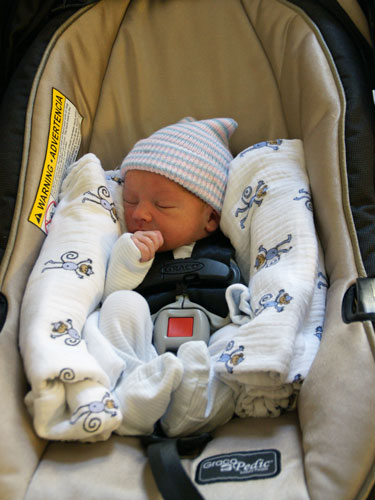 Apparently every safety rule was observed in placing Leo in his car seat. Lenny & Lisa actually took a class - CarSeatology 201 - and passed. Car seats were professionally installed in both cars. But, dang, if the little six pounder didn't seem lost in the safety seat.

Leo slept all the way home!

This afternoon was a blur of errands and chores. Since Leo was early, none of his clothing/bedding/burp cloths/etc had been washed, so DT and I went on a laundry-bender. Four loads (so far). We brought lunch in to the new parents, then went to the kennel and fetched our Granddawg, Reese. Reese was very excited to be home and isn't too concerned yet that Lisa and Lenny are paying a lot of attention to "something".

Visitors stopped by to admire the precious baby. During a lull in the excitement, between loads of laundry and diaper changes, we all noticed a photo Lenny's Mom had sent of Lenny at birth. The photo could be of Leo. Leo looks IDENTICAL to Lenny as an infant. Identical. I can't wait for Lenn's parents to arrive! 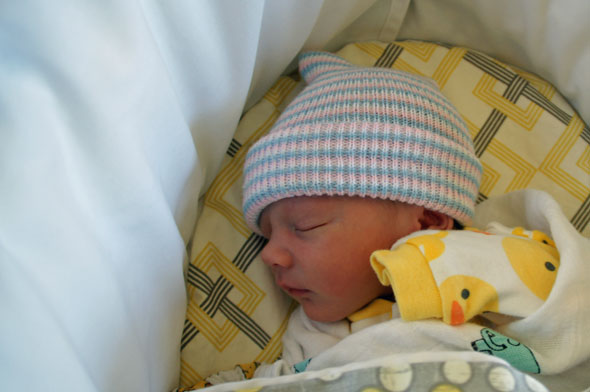 This is our handsome grandson, all snuggled up in his Moses basket, wearing his little duck sleeper. This is before he soaked through everything. He is so tiny, the newborn diapers are just too big (and the preemie diapers are too small), so there is a lot of liquid escapage every which-way! I am not a physician, but it is safe to say - this kid has no problem with his digestive system!

To observe the Sabbath, I roasted a chicken (that weighed more than Leo) with a lot of rosemary, steamed green beans and then made a "salad" with hot roasted Yukon Gold potatoes, arugula and grape tomatoes in a lemon vinaigrette. The hot potatoes "wilted" the arugula and it was so yummy, and there is a possibility that some of the chicken fat from the roasting pan made its way into the vinaigrette.

Nursing Mothers need a lot of calories... but Lisa had strawberries for dessert.

Until my next update, I remain, your busy correspondent.
« Fingers & Toes Saturday with Leo »