Dear Sweet Patient Reader, the event has finally arrived. I want to apologize in advance for the state of this website over the next 11 days. There will be a lot to read. I hope there will be many photos to enjoy.

Dave and I attended a reception this evening at NIKE World Headquarters for the women and men who will compete tomorrow in the Hammer Throw Olympic Trials. The Olympic Trials hammer throw will be held in Beaverton - on the NIKE campus - where a hammer cage has been constructed solely for the purpose of this one-day competition. How cool is that? Also, Hammer Time is free and open to the public.

At first the throwers were not too excited about holding the event outside of Historic Hayward Field, but the truth is, the hammer is always held "outside" of Hayward Field. The event is so dangerous, so volatile, and requires so much space, the hammer is always held outside of the main stadium. If throwers are lucky, 500 people will venture outside of a track stadium to watch them whirl and twirl and spin to project the hammer implement into the air. The hammer is a fabulous event. So much skill, strength, brains and cojones are required - I cannot understand why people would watch a football game if they could watch a hammer contest. No comparison.

But I am weird.

After practicing the past few days on the NIKE campus and after seeing the huge fan base in Portland, the hammer throwers are now very enthusiastic about the venue choice and are thankful to a Certain Driver We All Know and love for making this event possible. Dave was recognized tonight at the event as the person to "thank or blame" for the event being held outside of Hayward Field, so we will see how this whole thing works out tomorrow or see if we need to hop in the RV to seek refuge in Canada or Mexico. 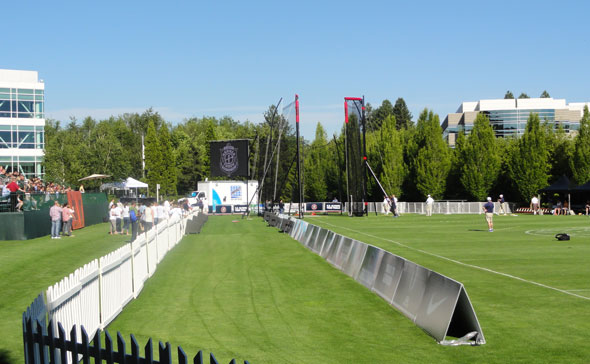 The cage was designed and constructed under the strict supervision of Lance Deal. Deal is the current US hammer throw record holder - which he earned in 1996 in Milan (82.52 meters, or nearly 271 feet).

This evening, NIKE held a hammer non-serious competition for their employees. Not surprising, a few NIKE employees threw the hammer in college and they put on quite a show to the amusement of their coworkers. 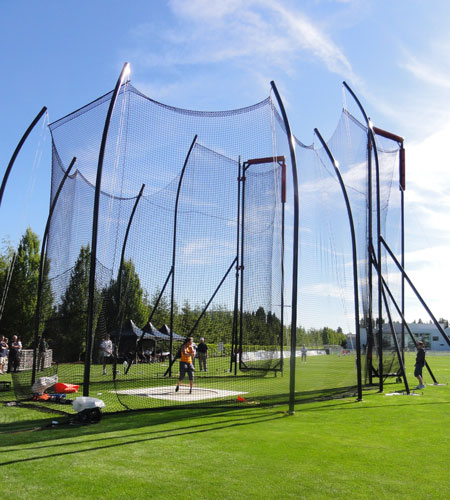 The nicest hammer cage I have ever seen 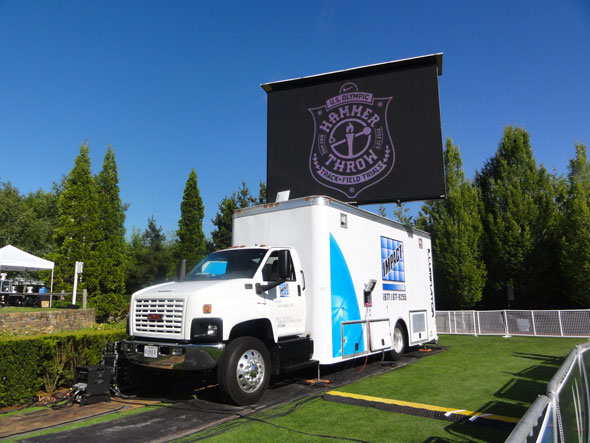 The TV trucks are here and ready to go.
The event will be broadcast live tomorrow on regional Comcast television. Check your TV schedule!

After the employees had their fun, US hammer record-holder Lance Deal gave it a little spin. DT swears, with 5 weeks training, Lance (age 51) could make the US team. 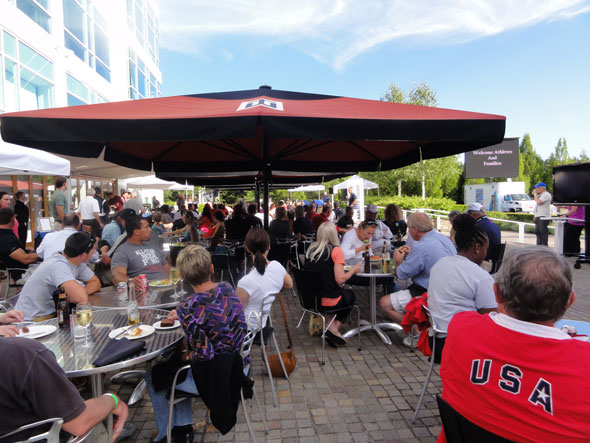 Dinner for the women & men hammer throwers and their family/coaches

The dinner for the throwers was quite fun with chicken and massive hamburgers on the menu. And by massive hamburgers I mean: DT and I thought maybe if we really tried we could finish half a burger - together. Funny thing? We saw a few of the guy throwers eating triple burgers. These men are so massive - I can't imagine how many calories they must consume every day to exercise as much as they do. I felt absolutely teeny tonight and I am NOT teeny!

I met many throwers tonight - such a thrill for this old teeny gal - but was most honored to meet Major Michael Mai. Mai throws for the US Army. He is here from Afghanistan for the trials and whether he makes the US team for the London games or not, Major Mai will return to Afghanistan at the end of the year. Such a story this young (MASSIVELY HUGE) man has to tell. It's not enough hammer throwers must conduct their sport behind the grandstands - this competitor conducts his real life in Afghanistan! Kudos to Major Mai - and all the athletes competing tomorrow. GO ARMY! 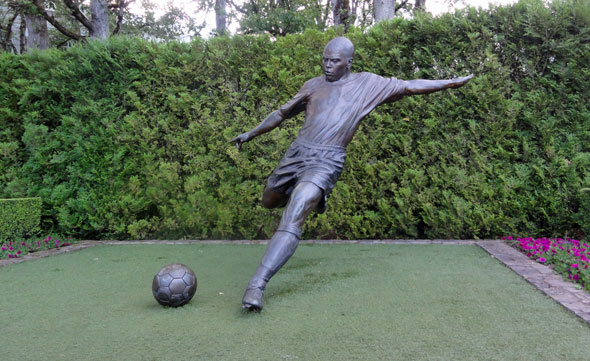 NIKE has turned their fantabulous Ronaldo Soccer Field into a hammer field for the next few days. It was a big expensive mess, but I don't think anyone - especially the throwers - are going to care tomorrow after the best US Hammer Trials EVER.

If not, I'll be updating this website from Mexico...

Until my next update - from Track Town, USA - I remain, your hammered correspondent.
« I Made a Pinata Hammer Time »