Merced, California: We didn’t do much Friday. Well, I didn’t do much – Dave and his brothers spent time at various financial institutions and county offices settling still more paperwork for their Mother’s estate. We had Mexican food for lunch with Brother Steve and then went back to the hotel lobby to watch the Ducks play in the first round of the NCAA tournament. 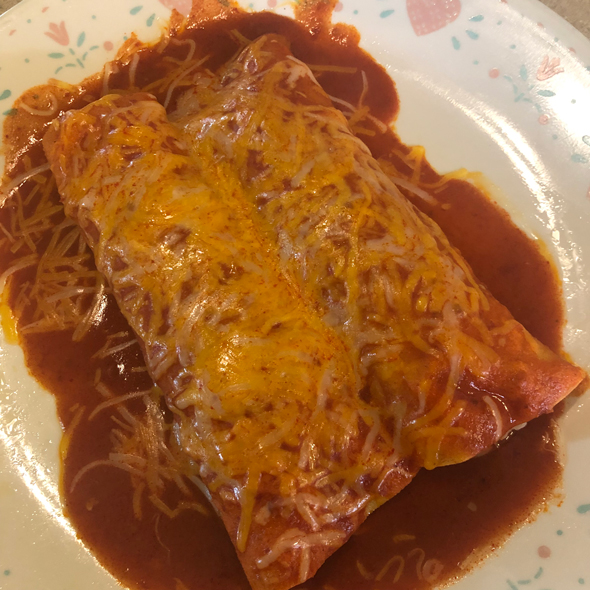 It was a good game, though we had dueling-noise in the hotel lobby/bar. Not only were the local hotels filled for the Merced High School Hall of Fame induction, The 40th annual Kiki Raina Tahiti Fete dance competition was held in town over the weekend. Hundreds of performers. One of the dancing troupes was staying in our hotel. They pushed all the tables/chairs to one side of the (not open until later) bar and the girls were dancing while the men were playing guitar and ukulele! Beautiful swaying hips and beautiful music… even if they did practice the same song over and over… and over… and over. Maybe the music brought good vibes to our Ducks, as they pounced on Wisconsin, beating them 72-54. GO DUCKS!

Brother Bill made pizzas for our evening meal – figs, arugula, caramelized onion, walnuts, goat cheese. Over-the-top as usual. He is the best cook in the family.

On Saturday, Dave met with the 1971 and 1972 cross country teams at a reunion luncheon before the big event in the evening. He loved seeing his teammates again – some he had not seen since high school.

At 5p, the new inductees (and past inductees) were to report to a pavilion in the fairgrounds to receive their jackets (think Masters jackets, except orange) and have a drink and reacquaint themselves with old friends. 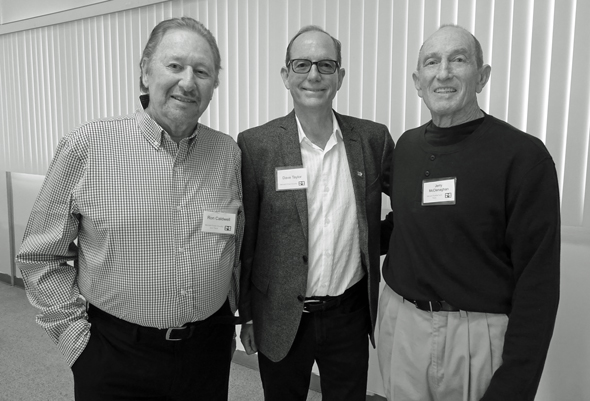 Dave was most excited to be with his track and cross country coaches again and was very happy they were being inducted into the Hall of Fame. These men shaped him into the dedicated athlete he became, and he gives them all the credit for his high school success. Coach Caldwell’s 1972 team was ranked 2nd in the nation. 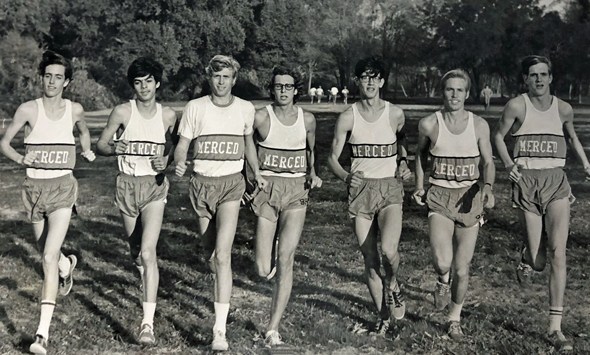 One of Dave’s teammates, Tom Tyra, brought a scrapbook with this wonderful photo (above) of the team. Dave is on the far left and his good friend, Mark, is running in the center.

Past (DT was inducted individually five years ago) inductees posed with the new class. Besides the cross country team and Dave’s coaches, there were 13 other stellar athletes inducted this evening. This is the only time you will ever see my husband wearing anything orange. 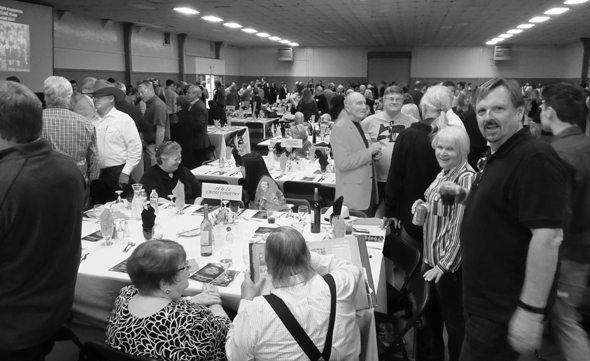 After the social hour for inductees, we moved into a large building in the county fairgrounds for the (smoked beef steak) dinner and ceremony. Over 300 people filled the room! 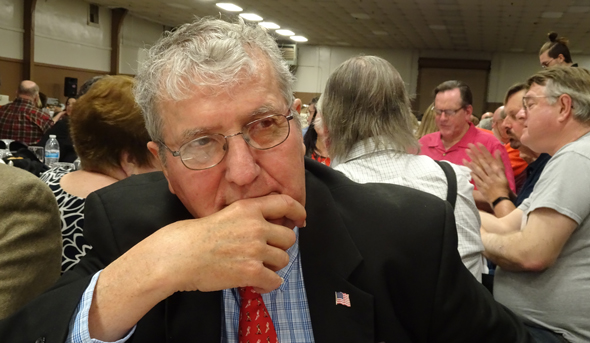 Another powerful influence in Dave’s life is Cliff Clark (above). Cliff was a runner and a Lieutenant in the Air Force, stationed at Castle Air Force Base in the 1970’s. He volunteered as an assistant coach while Dave was in high school. The two have remained close over the past 45 years. Cliff owns/operates the ferry in Shelter Island, New York – a business that has been in his family since 1790 (not a typo). 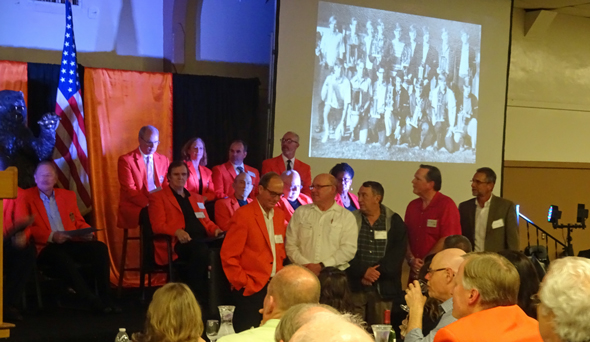 The championship cross country team being inducted into the
Merced High School Hall of Fame.

Look at all that hair! 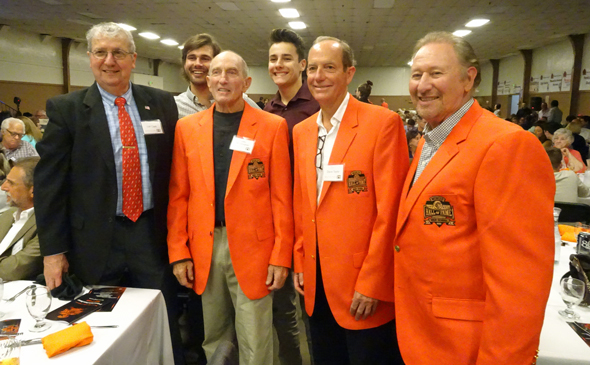 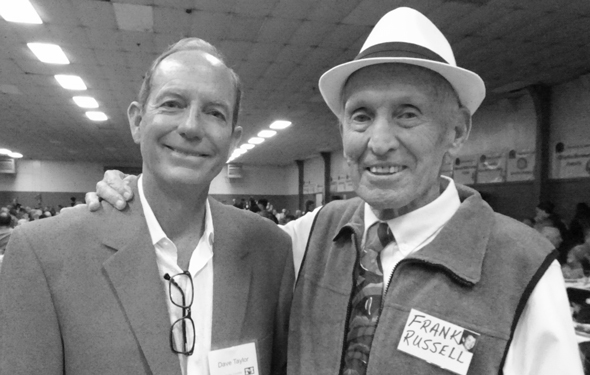 Two Merced running legends in one photo! Frank Russell is famed for his ultra-distance runs, jogging one mile for every age on his birthday every year. Mr. Russell has recently slowed-down this activity, telling Dave he “only ran 8.6 miles” on his most recent 86th birthday.

You know distance runners are a bit mad, right? 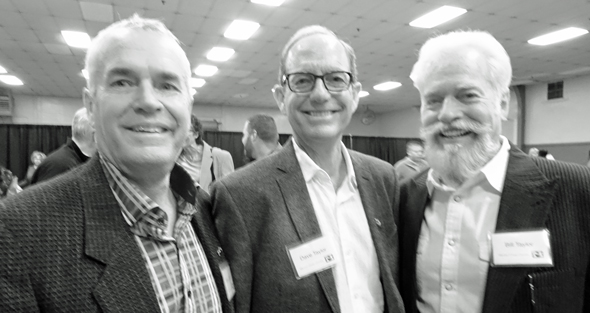 Also in attendance this evening were the notorious Taylor Brothers – Steve, Dave and Bill – supporting their little bro on his big night.

What a wonderful evening. Many thanks to the athletic department staff for planning such a stellar event and congratulations to all the talented inductees! GO BEARS!

Stay tuned – there is another induction weekend activity tomorrow.