Merced, California: We were up and outta-here this morning, packed and ready for the six-hour drive north from Palm Springs to Merced. We opted for the car this trip, as we would only be staying three nights. The purpose of this trip? Dave’s high school cross-country team – and their legendary coach – are being inducted into the Merced High School Hall of Fame Saturday night.

Dave was inducted individually several years ago, but he was so excited to see his coach and team inducted, and the chance to see them all again.

But first… flashback to Tuesday: 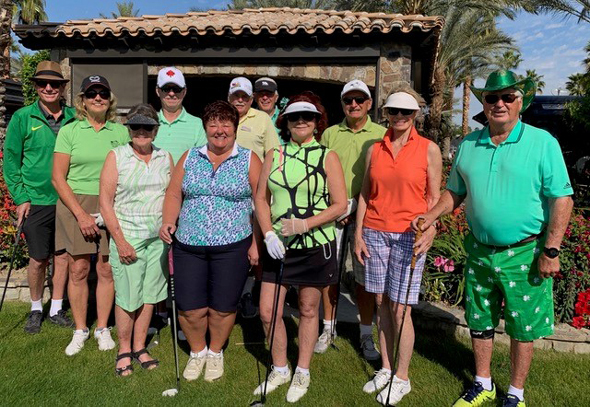 Speaking of My  Golfer, far top left – in green.

Hours after returning from our five-night session in Las Vegas, Dave was golfing with his team in the annual MCC St. Patrick’s Day tournament. His team took second place and DT brought home $30 cash money.

After arriving to Merced and checking into a hotel, we went to a local steakhouse favored by Dave’s dad (vegan week lasted three days). We needed food, and after hours on the road, and a visit to The Branding Iron would be a bit of an homage to his Dad who would have been 100 years old this month. Though the restaurant has now faded from it’s former glory, back in the day it was a very popular – nearly fancy – meeting spot.

Dave’s mom and I planned a surprise 70th birthday cocktail party for Dad in 1989, held in the private dining room at The Branding Iron. If only I could recall, 30 years ago, exactly how we planned this event. We had just moved back to Oregon from Taipei. Al Gore had yet to invent email. Dave’s mom and I must have planned it all via the telephone (land line!)? Formal invitations were mailed (via the post office!), with RSVP cards returned to our house in Portland.

Dad was completely surprised! There must have been 50 guests, enjoying the bar and passed appetizers, honoring one of the greatest guys you could ever meet: Colonel Will Taylor. About five minutes after arriving, I think Dad calmed-down a bit and did a double-take exclaiming, “Dave and Terry are here” – even though he had already hugged us. It took a bit for the surprise to sink-in and that his #3 son had traveled from Oregon for the event. I do remember his only grandchildren (at the time), Lisa (8) and Meghan (not yet 2) wore matching white sailor dresses with wide blue-trimmed collars. Someone did some planning.

Our quiet dinner for two at The Branding Iron tonight paled in comparison to the evening thirty years ago. The dining room is a bit dingy these days, but the steaks were decent and very well priced, compared to Portland or Palm Springs – or don’t even imagine – Las Vegas. 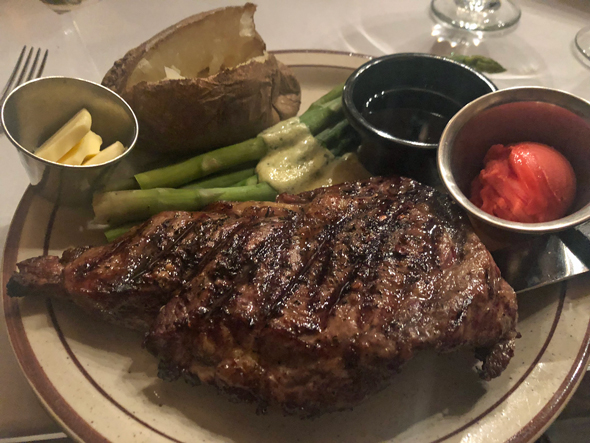 I think they should use oval platters? I had their most popular item – a coffee-rubbed rib eye. It came with all sorts of sides, but I opted for the classic baked potato. It’s still old-school, as someone comes by with bowls of sour cream, chives, bacon bits, etc., for your ‘tater. The vegetable of the day was asparagus (delicious). The brown sauce was an oddly-sweet coffee sauce. The bowl on the far right held a scoop of raspberry sherbet. Not sure if this was supposed to be dessert or a palate cleanser… to cleanse my palate between my martini and my steak? 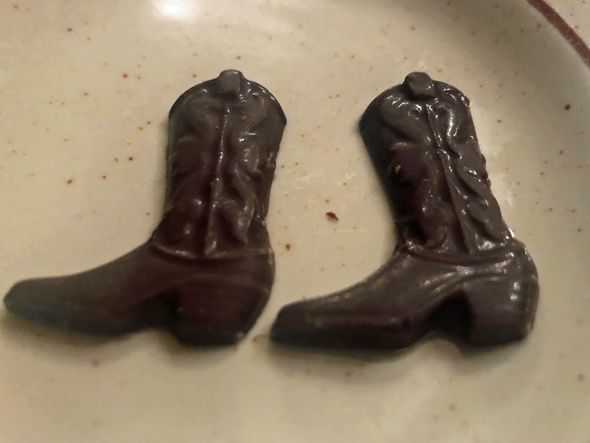 Mint-chocolate cowboy boots are delivered with the check. Cute.

Until my next update, I remain, your valley correspondent.