The Happiest Place on Earth:  Our trip to Disneyland has nothing to do with Lucy finally being able to say Bubbe and everything to do with a competition Leo and I have been in over the past six months. I bite my nails. Leo sucks his thumb. Leo wanted to see the new Star Wars area at Disneyland, so we made a deal: Leo would stop sucking his thumb and Bubbe would stop biting her nails and we would go together in April. I had my fake fingernails removed and went cold turkey.

Today, I currently have ten nine eight presentable fingernails and Leo is really really really doing a pretty sort-of-decent job at not sucking his thumb... and... well, we are at Disneyland... perfectly imperfect... and together. (Though I surely should get extra credit as I have had this habit for 60 years and Leo has been sucking his thumb only four. Right??) 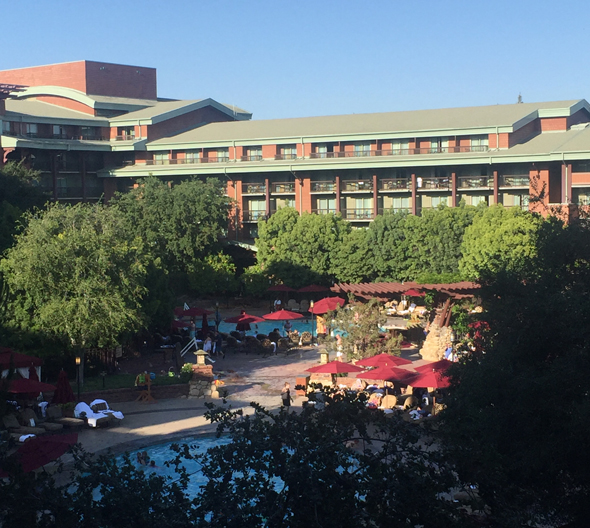 Dave and I left Indio at noon. The kids left Los Angeles around 1:15p and we were together in the Disney Grand Californian Hotel reception area around 2:15p. We had arranged for adjoining rooms and we did, in fact, get adjoining rooms! Our rooms overlook the pool area, and each have two queen beds, fridge, desk, safe, balcony with a little table/chair situation, ironing board/iron... and each room has a portable crib. Standard. 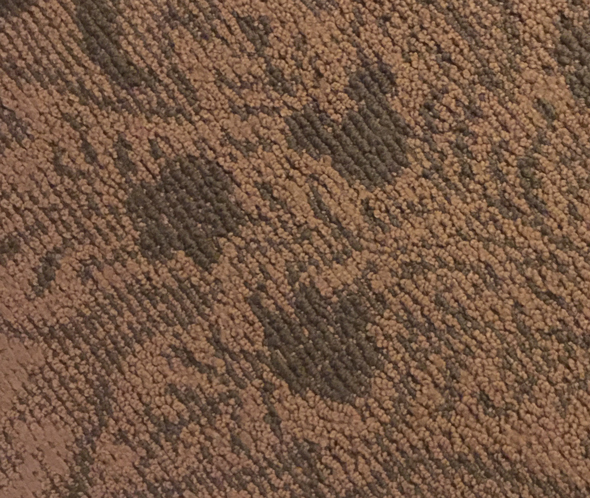 You must take a little time to discover Mickey's presence woven into the carpet in our room. Leo especially enjoyed pointing-out this feature. Lucy can say Mickey Mouse... though it sounds a bit like mick-mao... and Lucy is super excited about this entire adventure though we are pretty sure she has no way of understanding what is about to go down. After checking-in and getting situated, we went down to the pool and spent the afternoon relaxing. We will tackle the park tomorrow. 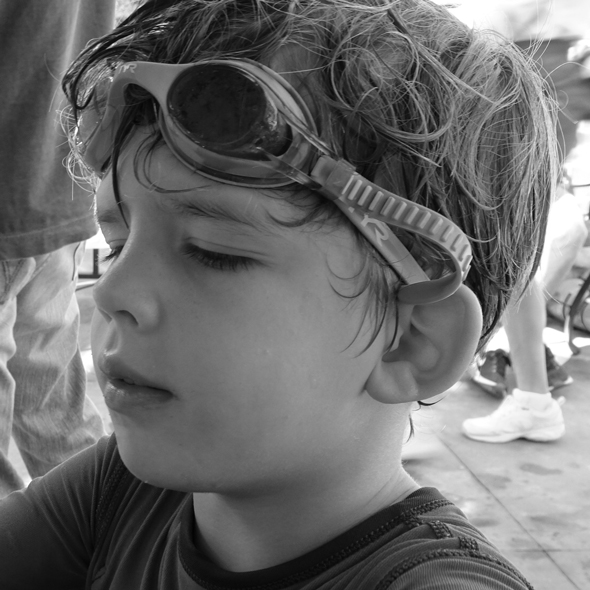 After naps and rests and baths... 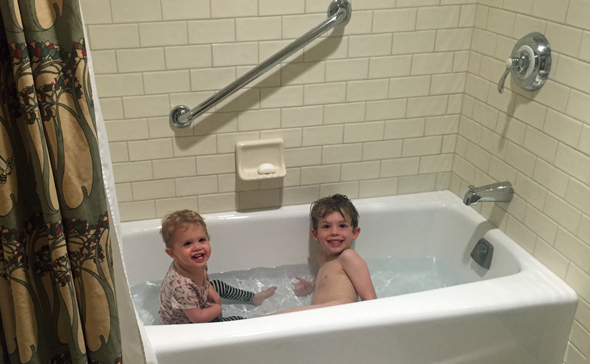 ... where Lucy thought it would be fun to hop in the tub with Leo... never mind she was fully clothed.

After all this, we went to the adjoining Downtown Disney for dinner and a stroll. 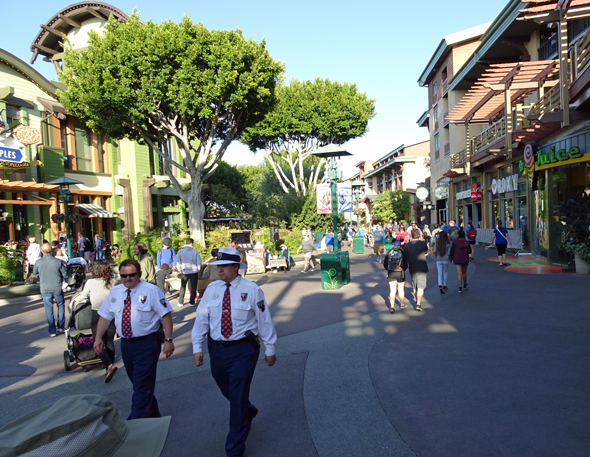 This area - connected to our hotel - has shops, amusements and restaurants to provide something to do and somewhere to eat between visits to the theme parks. We found a table at a pizza place and had pretty decent food. 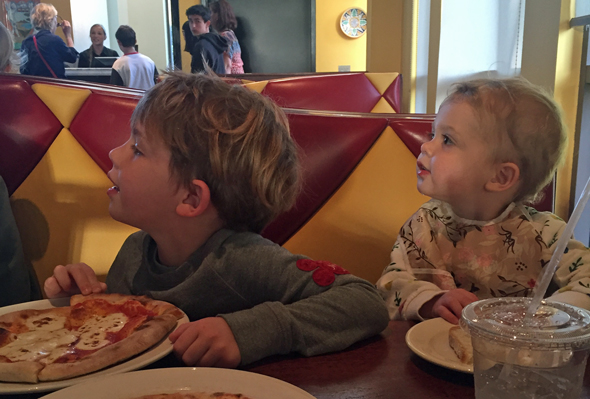 A team came by our table during dinner and asked if the kids would like a balloon animal. Heck ya! Leo and Lucy were entranced. 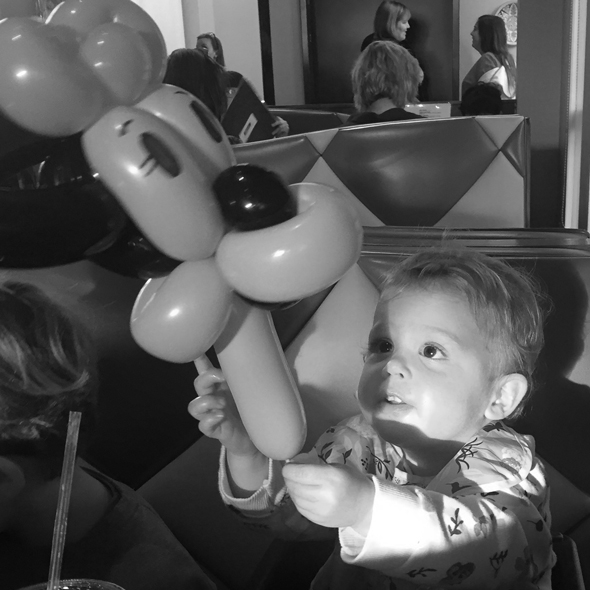 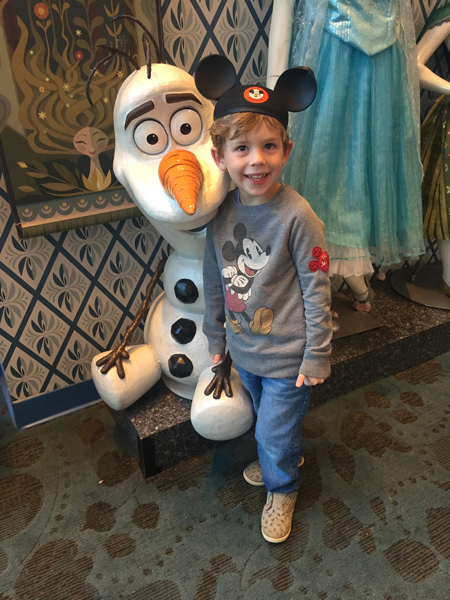 Leo, posing with Olaf (shoes may/may not be on correct feet) 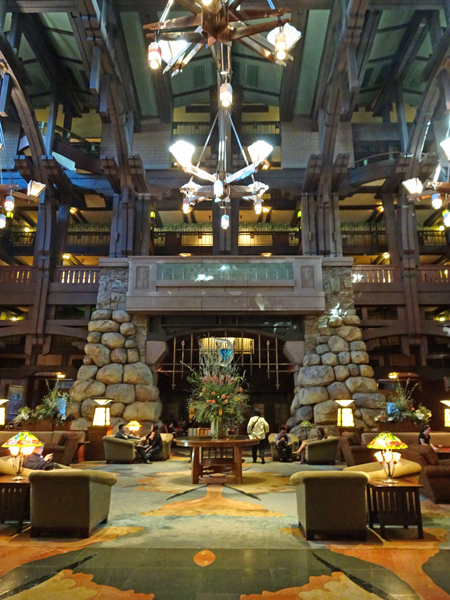 After dinner, we walked through the massive impressive hotel lobby. It was built to resemble a lobby in a California National Park hotel, such as Yosemite. There were several fireplaces (all gas/fake, of course) and a television set playing antique Disney cartoons with miniature rocking chairs for the kidlets. Guess where our grandchildren went? 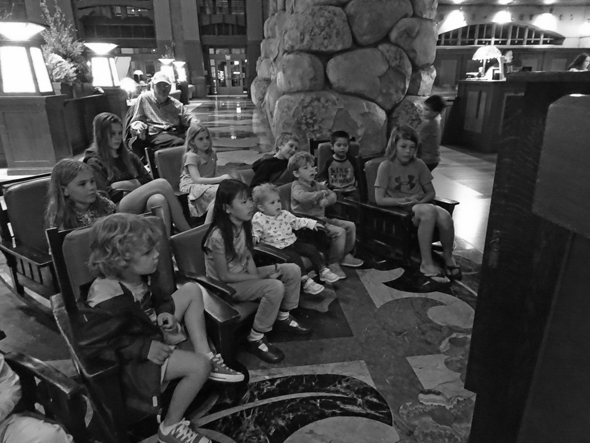 Lucy and Leo were front-row and center. 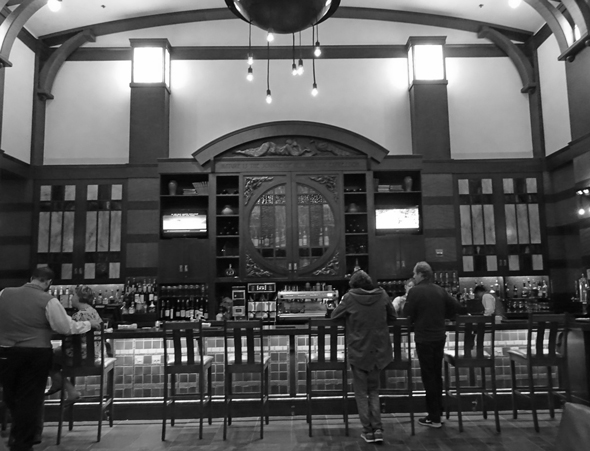 Dave and Lenny went into the bar and bought refreshments for the adults. This bar also has an amazing espresso machine and they open at 6a, so we know where we are going first thing in the morning for caffeine. 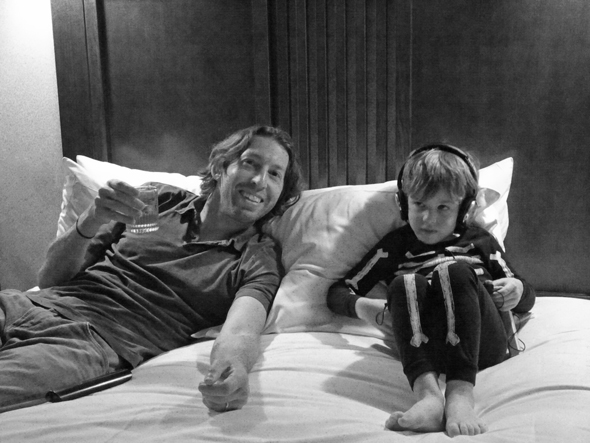 Back to our rooms... everyone spent the rest of the evening in our room, waiting for Lucy to fall asleep in Lisa and Lenny's room. The adults watched Kobe Bryant play his last professional basketball game (actually coming from behind against Utah to win at the last minute) while Leo watched/listened on headphones to a movie on his Mom's ipad. (TV in the lobby and iPad in the evening equals more screen-time than Leo usually is allowed in a week. Rules don't count on vacation, right?)

We are situated. We have a game plan for tomorrow. Disneyland. Hit the ground running at 7:30a

Until my next update, I remain, your prepared correspondent.

« Catching Up + Packing Up Disneyland »