Indio, California: Did I forget to mention Steve and Kris are here to have a little holiday away from snowy Denver and to celebrate Steve's birthday? Steve is actually worse than DT about having attention shown toward him. Both men just hate it when anyone wants to congratulate them or throw them a birthday bash.

But today my brother had a little teeny spoiling. His friend came all the way from San Diego to take Steve to lunch and later we planned a "pub crawl dinner"... except you really can't quite do that quite properly in the area as only one of the sparse few breweries sell food.

We started our celebration at the Backstreet Brewery, which is some-how connected to a co-joined pizza place. Steve had a flight of their beers and then we moved on to El Mexicali Cafe - the original branch; on the railroad tracks - for his birthday dinner.

Y'all know we really like El Mexicali. They are unique. They are local. They are 12 feet from a busy rail line, causing major jostling when a train passes by... and a train passes by every ten minutes or so. And... they have soy sauce on the tables. (The culture in Mexicali, Mexico is a blend of locals and Chinese immigrants who arrived to build irrigation canals.)

Since Steve hates attention, it didn't take DT 12 seconds to mention to the owner that we were here to celebrate Steve's birthday. Oh Boy, did the entire staff come to full attention.

First the owner insisted that Steve (who was drinking sparkling water after his beer flight) enjoy a nice cocktail on the house. Steve said no, but after much insistence, he agreed to a shot of tequila. 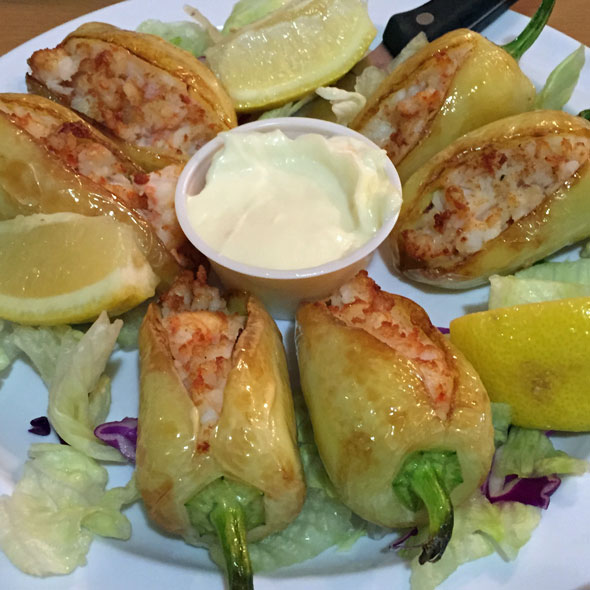 Of course, our table ordered the shrimp-stuffed yellow pepper appetizer made famous in Mexicali - Chili Gueritos Rellanos de Camaron. The proper way to eat the stuffed peppers is 1) drizzle with soy sauce 2) add a dash of mayo, and 3) give a little squeeze of lemon juice, and eat. Steve proclaimed this a perfect birthday treat. 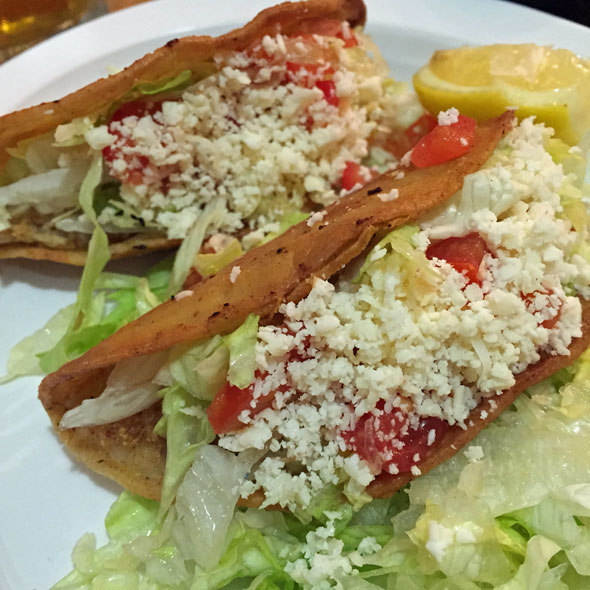 After our meal... when we asked for the check.. is when it all seemed to fall apart. Out of nowhere appeared a live band, singing girls, a platter with leche flan, a birthday candle and a photographer. 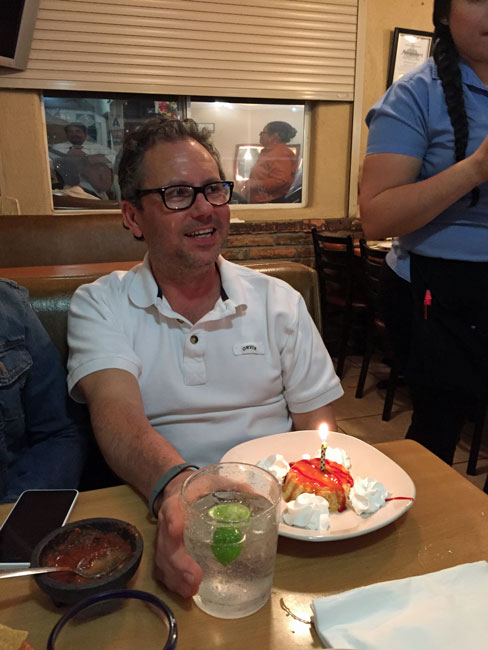 That is soda water - not tequila

It was like we were in Las Vegas... if Las Vegas happened to be by the train tracks in Indio.

Maracas. I forgot about the maracas. The staff handed-out maracas for everyone to shake while the band sang Happy Birthday to my baby brother.

Poor Steve was pretty-much mortified. Everyone in the restaurant singing to him (the band referred to my brother as "Panchito") was breaking his attention-resistance barometer. Just as the excitement died down and we polished-off his free dessert, the staff presented Steve with a very cute photo - of Steve and Kris during the singing portion of the evening - in a custom-made El Mexicali wooden frame. (Kris is shaking a maraca in the photo!) Wow, so cute. We were blown-away by the amazing souvenir/gift. Thank you, El Mexicali Cafe!

After the bill was paid and we were in the car on the way back to the RV resort, we noticed Steve's tequila was on the tab. (We are assuming this was an error in their accounting department?)

How could we top-off a fabulous birthday celebration night? A night cap in the resort bar of course.

We closed the joint down.

Until my next update, I remain, your wild correspondent.