Portland, Oregon: First a few notes from your tired correspondent. The wifi at the house we rented in Sunriver was the worst thing ever. (Not to mention, there were three closets in the three-bedroom house, and not even one of them held even one hanger. No dressers either. We lived out of our suitcases the entire trip. Annoying.) But not as annoying as sporadic-at-best wifi. I was never sure if a photo had been posted to this blog or not. Now that we are home with real internet, I think all is right and hopefully any day, this blog will switch back to the real  – and darker – typeface/font.

We checked-out of our hanger-free Sunriver rental house this morning and drove to Sisters to visit my Brother (I just love saying that). He (and Ali) live on a most amazing property, featuring a log cabin he built himself for his family 40 years ago. It is a work of art. 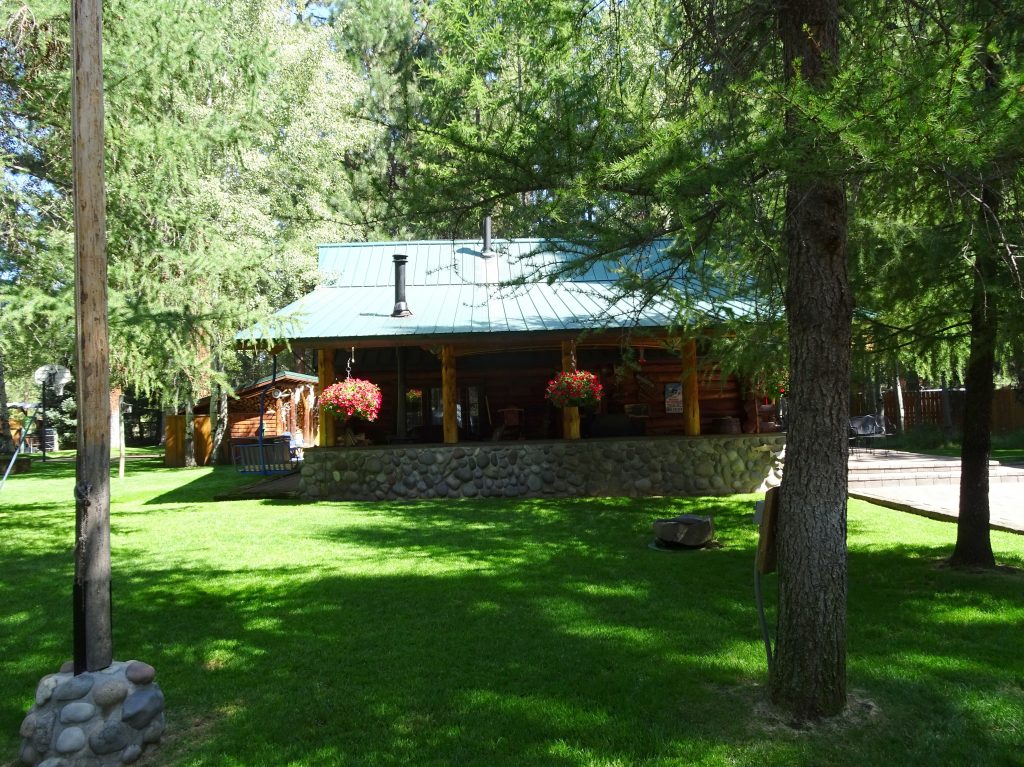 Rick also has a man-cave that serves as a two car garage… but in the back is an area to work on his bicycles, skis, and fly fishing equipment. These three activities keep him very busy and very fit… as does caring for his property. The man-cave also has a bathroom, fridge, coffee maker, wood stove, recliners and a massive wall-mounted television. The vaulted ceiling is lined with vintage skis. Everything is neat, tidy and organized. 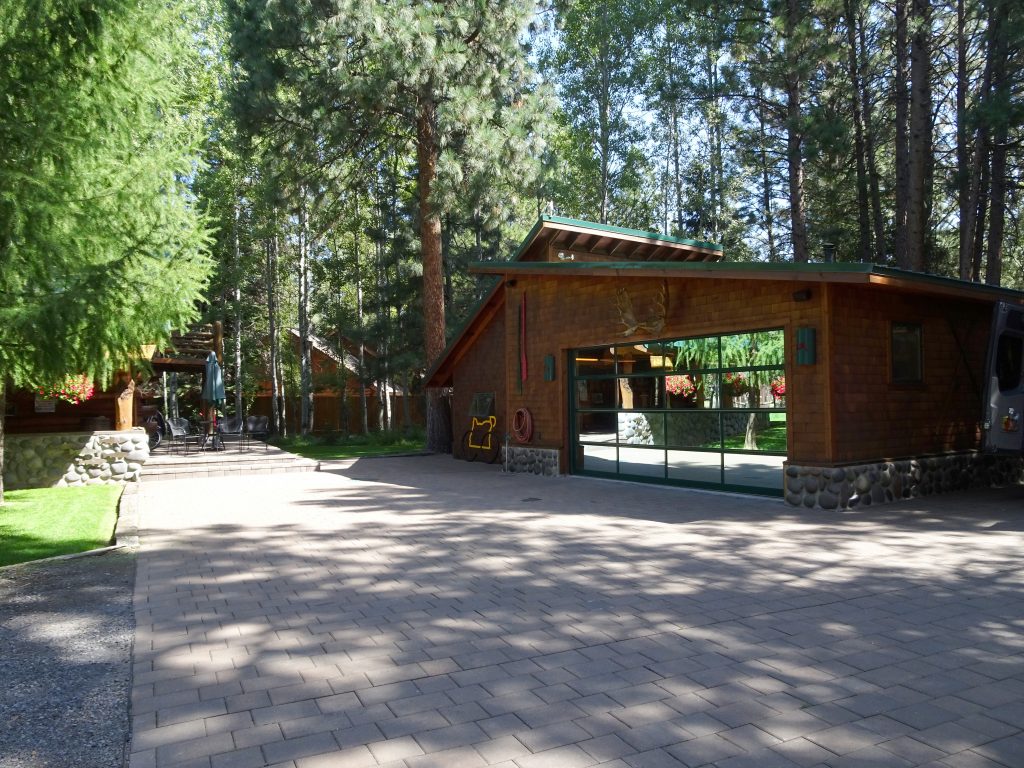 Rick and Ali also have many items of interest, like a porch swing made from an old ski chair lift: 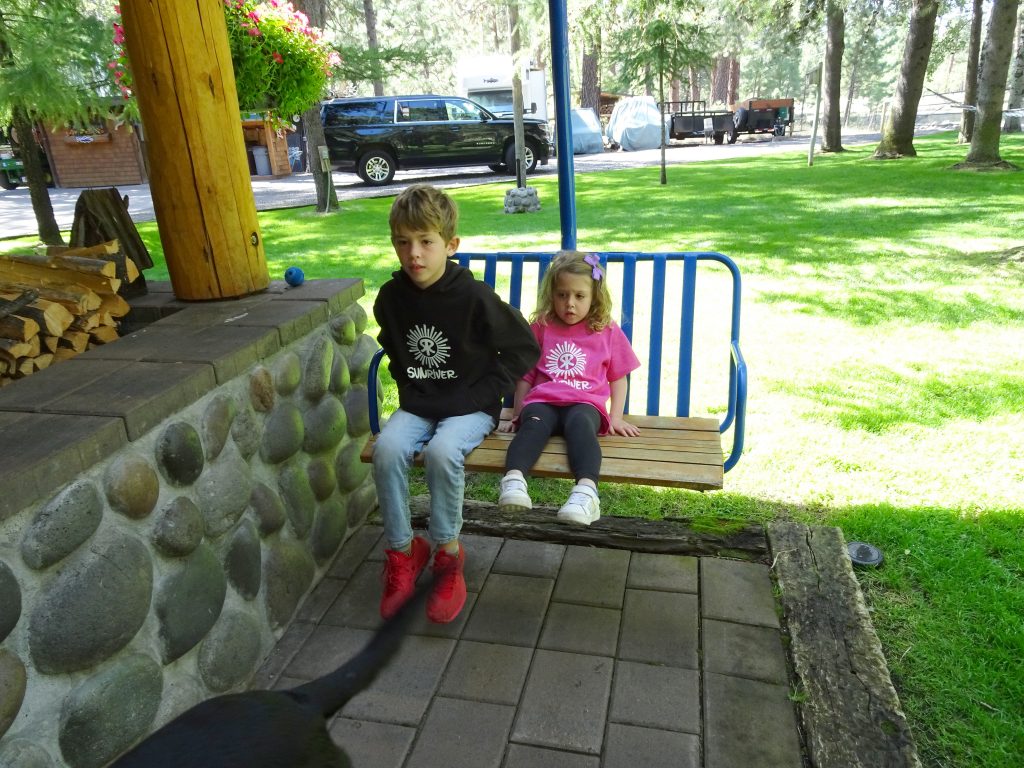 And art: you know how I like Jimmy Buffett? Rick feels the same about the Grateful Dead. 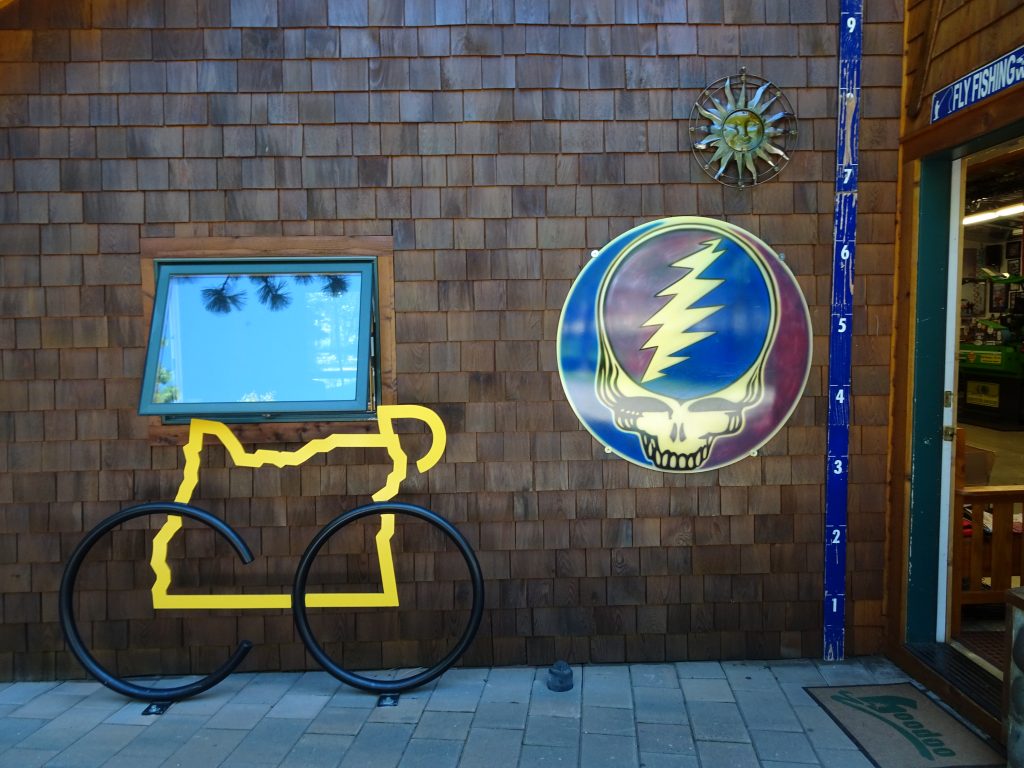 After a tour of the home and outbuildings, Rick took Lenny, Leo and Lucy on a ride in his ‘gator: 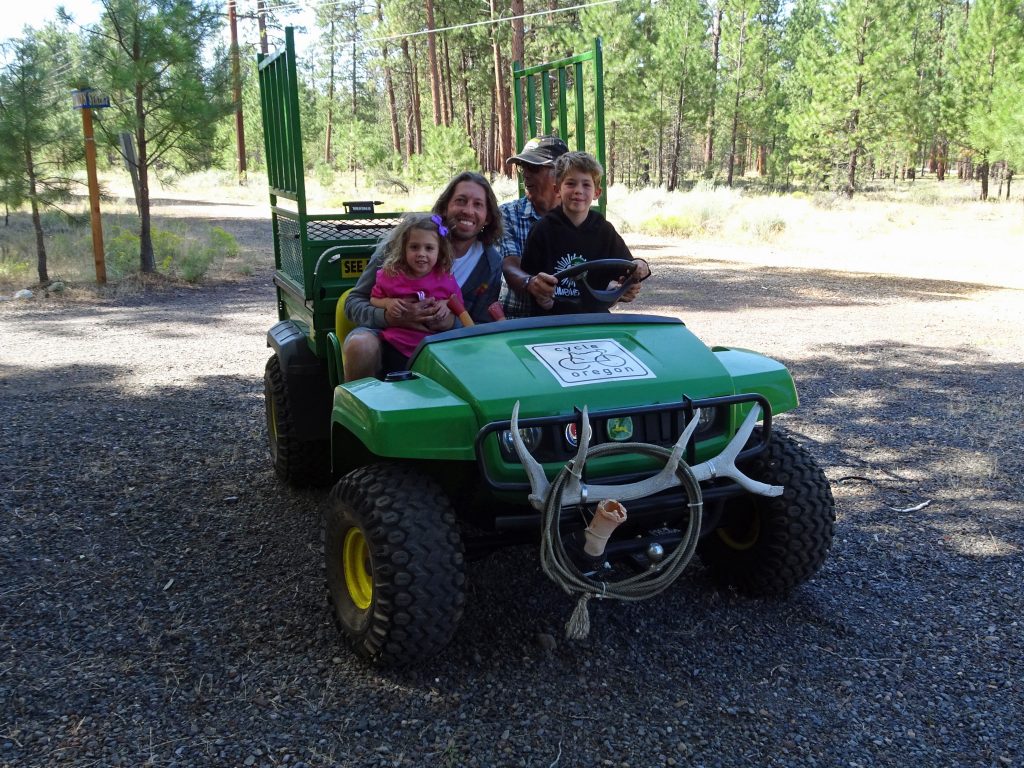 Leo thought it was more fun than riding in our golf cart in Indio.

Next we loaded up some fishing gear, and drove to the Camp Sherman Store where we purchased sandwiches for a picnic, and then drove to a new stocked fishing pond provided by Oregon Fish & Game. Kids under 11 years can fish and keep two fish a day from the pond. No license needed. 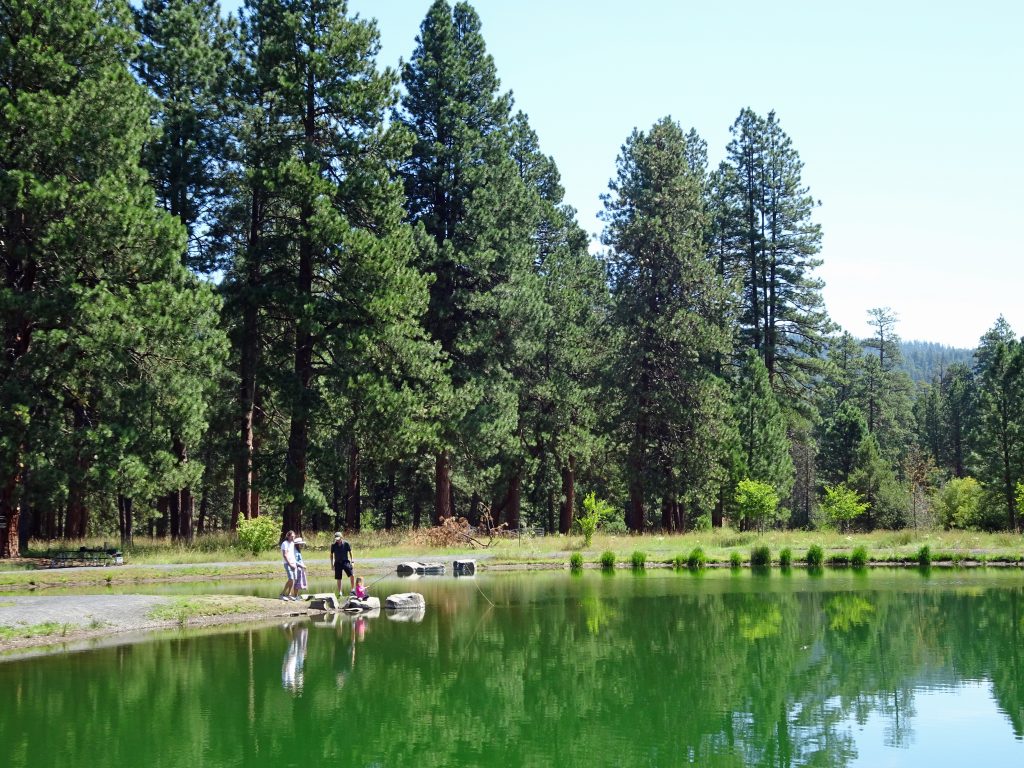 We had the place to ourselves and enjoyed our sandwiches on a shaded picnic table. It was over 90-degrees today. Rick only has fly rods, but situated the kids with bobbers and bait. Within two minutes, both kids had a trout on – at the same time! Pretty exciting. Lucy’s fish proved to be too small to keep (there is no size limit, but this fish wouldn’t even be worth frying), so we let it go. Lucy was a bit sad, but happy when she saw her prize swim happily/healthily away. 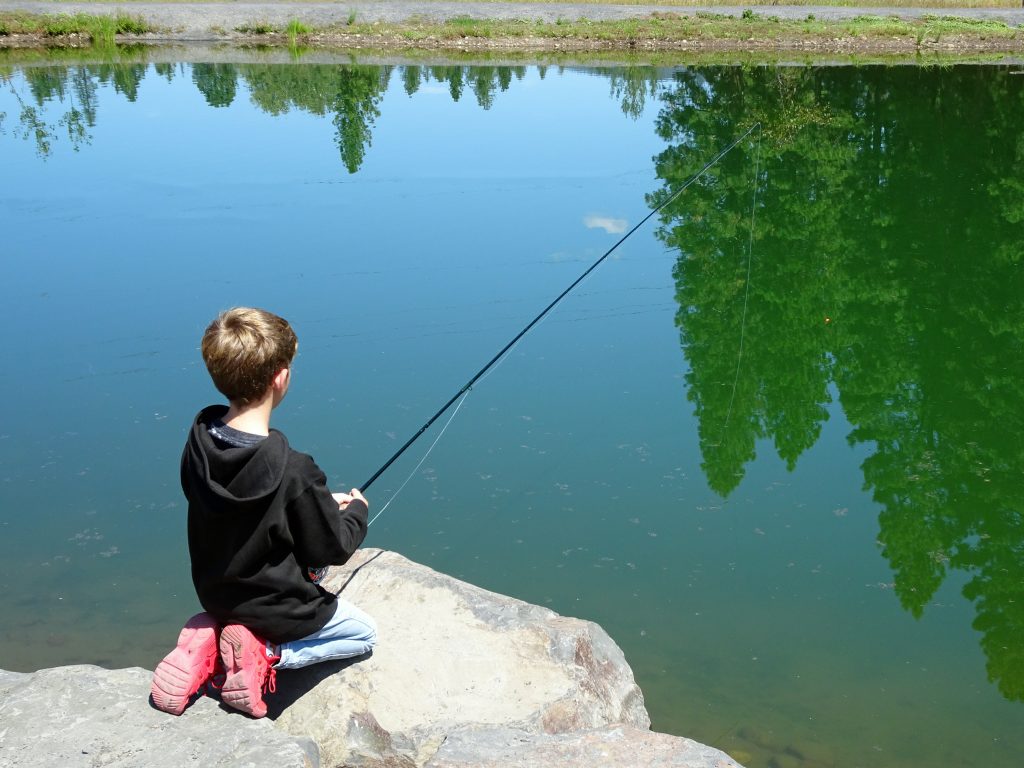 Leo’s fish was 10 inches! I measured. (Added later: it weighed-in at an even 6 ounces.) A fine breakfast for Leo in the morning. 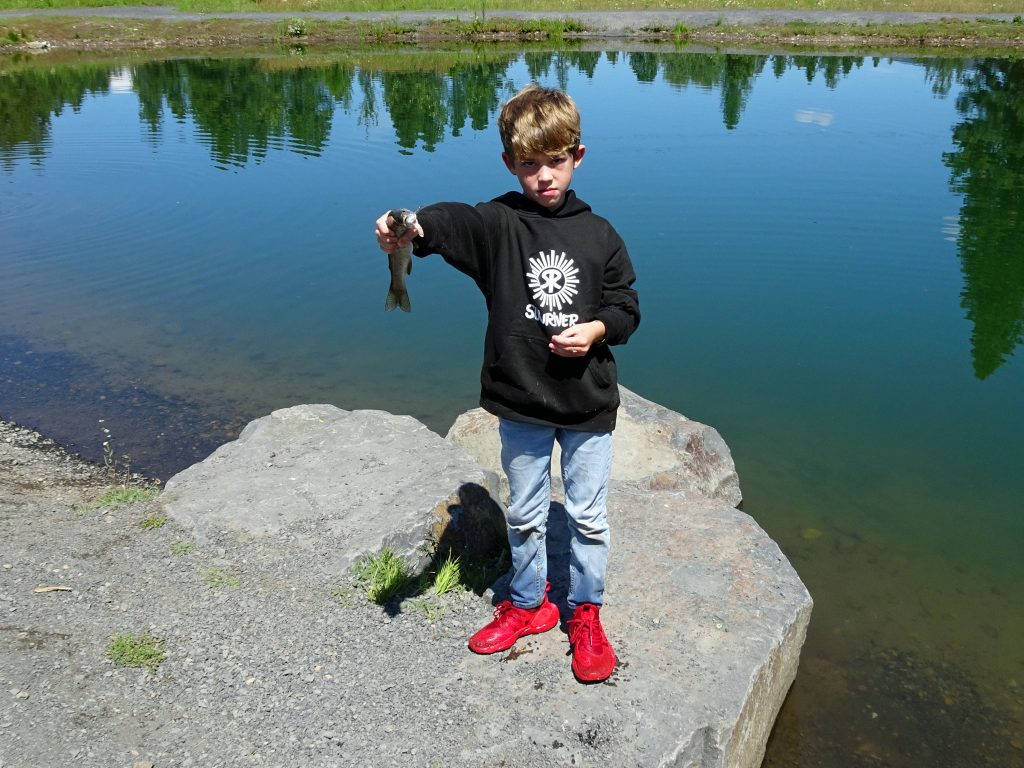 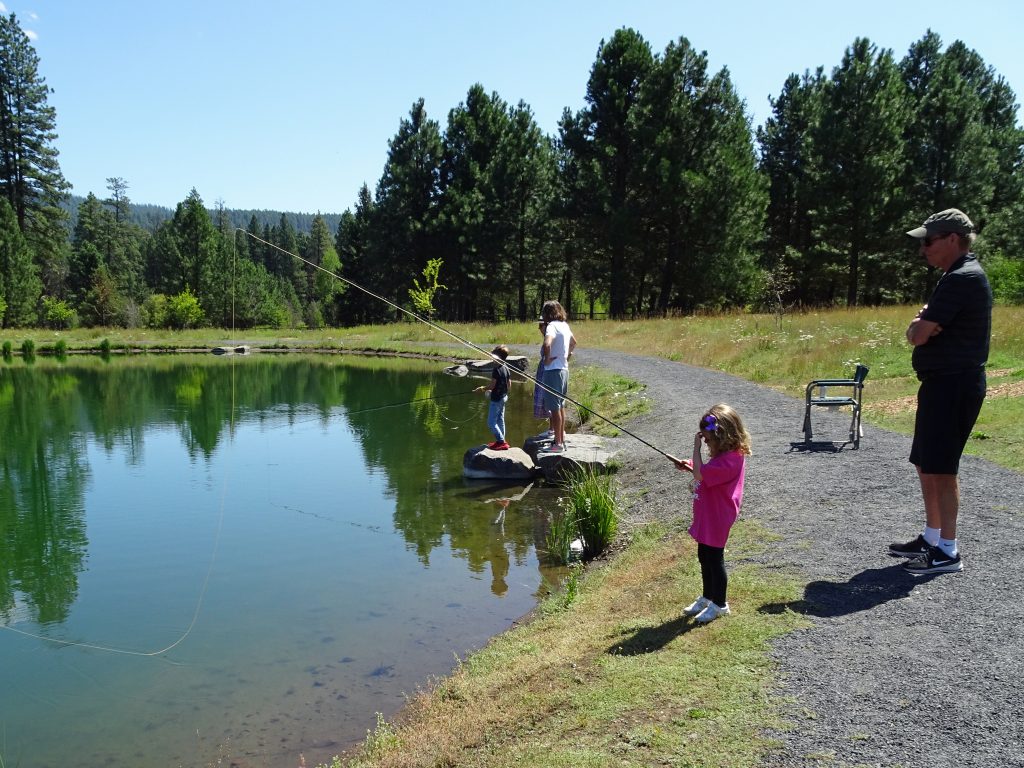 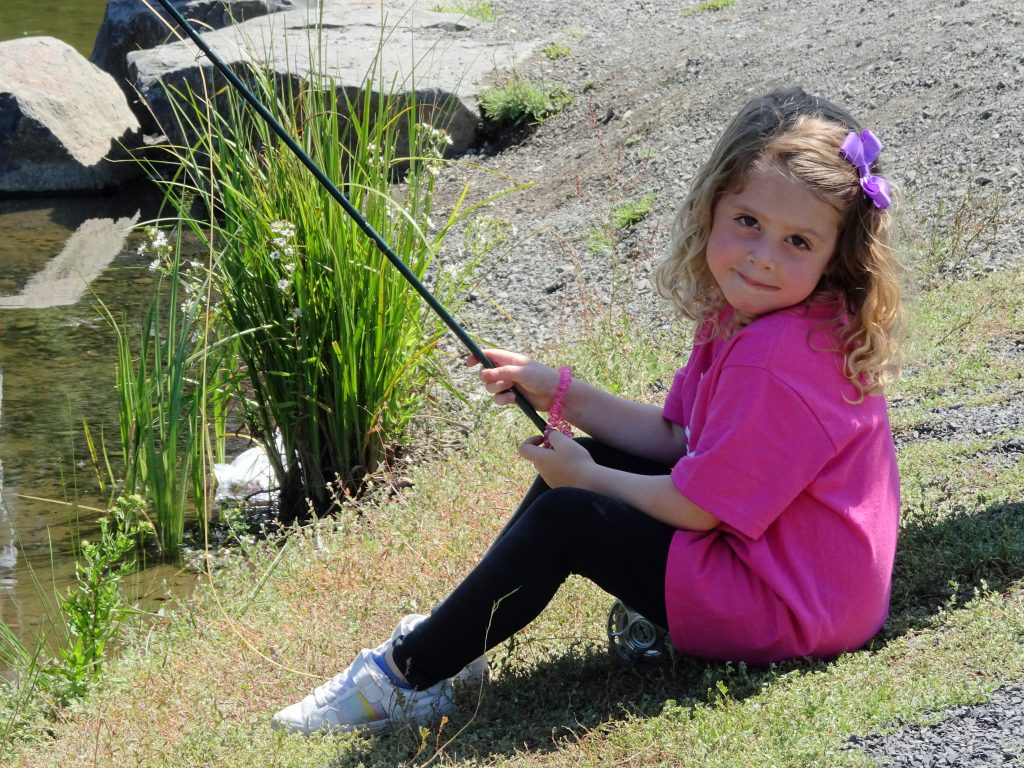 We can’t thank Uncle Rick enough for taking the time to take his grandnephew and niece fishing. They had so much fun… and I think Rick did as well. 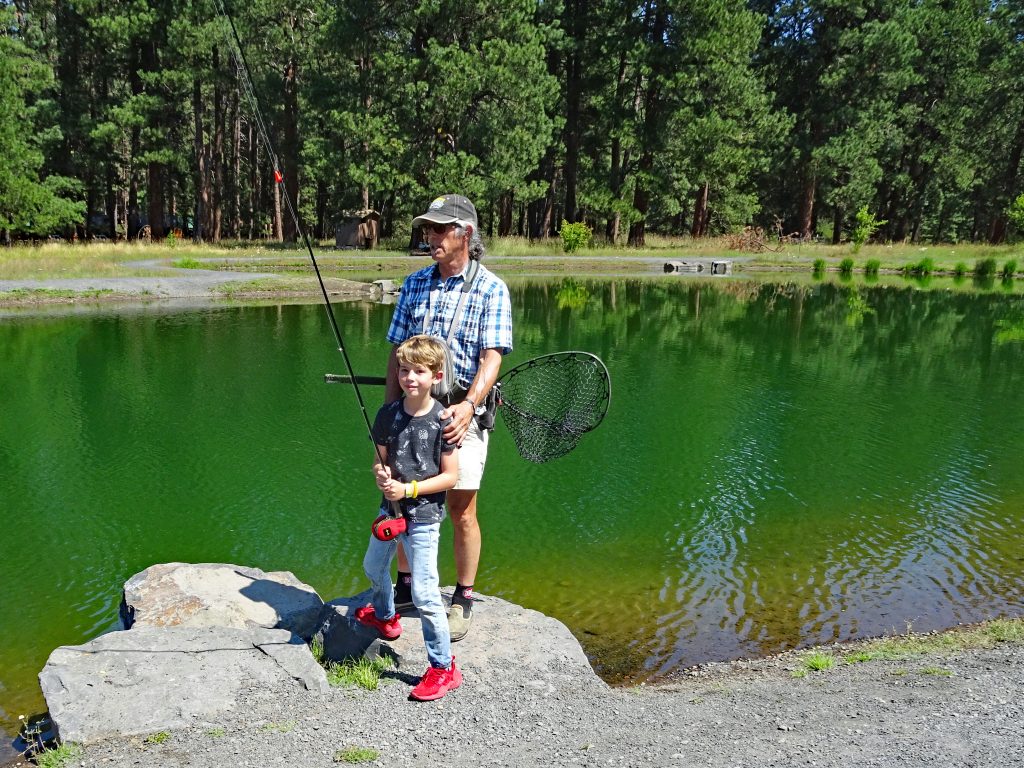 We left the pond and drove directly home, arriving around 5p, only to be back in the car at 5:30 to meet Tamra, Steve, and Lucy’s godmother, Jen, for dinner at Cornelius Pass Roadhouse.

No matter the wifi-and-hanger-free rental, we had a great five days in Sunriver. Lenny especially loved eastern Oregon. We will probably go back, but not until Lucy is at least seven years old (she will turn five on August 19th, and begins Kindergarten on the 20th), because children can’t ride horses, play bumper cars, or go down the water slides, etc., in the resort until age seven. There are a few things she can’t do until she is 42 inches tall… but that may be middle school for our little munchkin.

Until my next update, I remain, your home again correspondent.