Portland, Oregon:  I was able to sleep-in until 6:15 this morning. Luxurious. The men's 1500m heats went off as scheduled, in beautiful Brazilian sunshine, with all three Americans - Matthew Centrowitz, Robby Andrews and Ben Blankenship - advancing to the semi-final on Thursday. I don't know why my stomach was in knots. It's not like there was a chance Centrowitz wouldn't qualify. I just worry.

Just at the finish line of the second heat, Norway's Filip Ingebrigtsen, charged through the bunched racers - outta my way -  pushing Charlie Grice (UK) aside, causing Grice to falter and fail to qualify. The Great Britain coaching staff filed a protest and after the officials reviewed the tapes, the Norwegian was disqualified and the Brit was added to the group in the next round. Karma is a bitch.

The 1940 Olympic Games were originally scheduled to be held in Tokyo, but in 1937 Japan and China were at war. Even with assurance from Japan the war would be short-lived and over by 1940, there was much speculation and rumored boycotts if the games were held in Tokyo. The IOC decided to move the games to Helsinki, but as war escalated around the globe, the 1940 Olympics were cancelled. The world was too busy for games. The summer Olympics would not be held again until 1948 in London, and the next games were awarded again to Finland.

The 1952 Helsinki Olympics drew a team from Russia back to the games for the first time since 1917, and Israel and Indonesia entered teams for the first time. China also entered a team, but most of their athletes did not arrive in time to compete (!) and China did not participate again until the Los Angeles Olympics in 1984. America brought the largest team and brought home the most - 76 medals - with a team consisting largely of members of the military. The star of the 1952 games was the still-iconic Czech runner Emil Zatopek. Zatopek won the 5000m, the 10000m... and then, just for good measure, he entered and won the marathon. It was the first time Zatopek had ever run a marathon.

Dave and I attended the 2005 World Track & Field Championships in Helsinki. The meet was held in the Olympic Stadium, and it was great to experience the stadium and the lovely Finnish people. We ate a lot of fish and I distinctly remember DT eating reindeer. Though salmon was everywhere, Santa's little friends were served in nearly every restaurant. However, when I went back to look at my journal, I discovered DT had ordered reindeer, but it was not cooked. 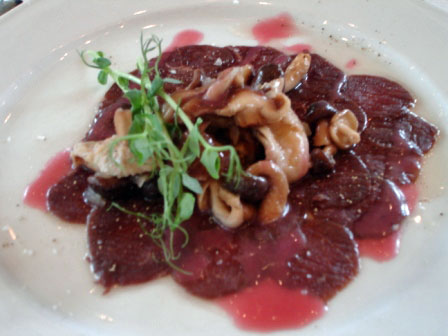 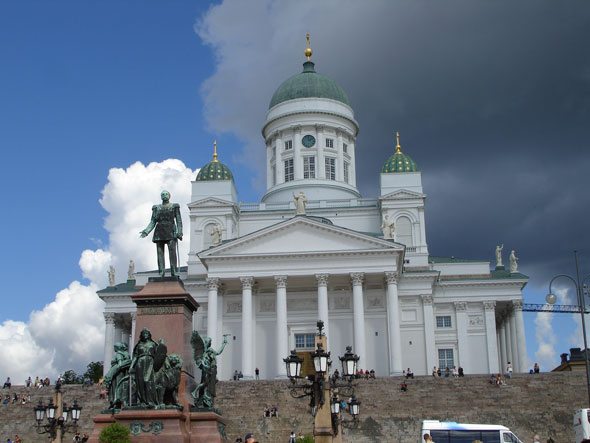 Senate Square in Helsinki, with a statue of Tsar Alexander II.
The statues on the rooftop, rear left, are atop Engle's Lutheran Church. 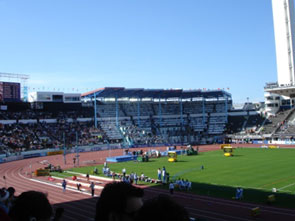 Several  Ducks competed in the evening session from Rio today. Duck football & track star, Devon Allen moved up to the 100m hurdle final, along with fellow Duck, Canadian Johnathan Cabral. Two Oregon Ducks in the 100m hurdle finals in the Olympics. Allen finished 5th (13.31) in the final and Cabral was 6th, behind Jamaican Omar McLeod (13.05), Orlando Ortego (Spain, 13.17) and Dimitri Bascou (France, 13.24). Of course, we are sad our Ducks did not medal, but are so happy the young men were able to experience the Olympic Games. Just imagine! GO DUCKS!

In the 200m semi-final, Duck Jenna Prandini failed to move on the to final, but Oregon sprinter Deajah Stevens did!

Wait, did I say that already?

To honor Finland, tonight I planned a traditional menu featuring a smoked salmon appetizer and meatballs as the main course. No raw reindeer... nor deer... no matter how many blackberries that dang doe is consuming in our field each evening. 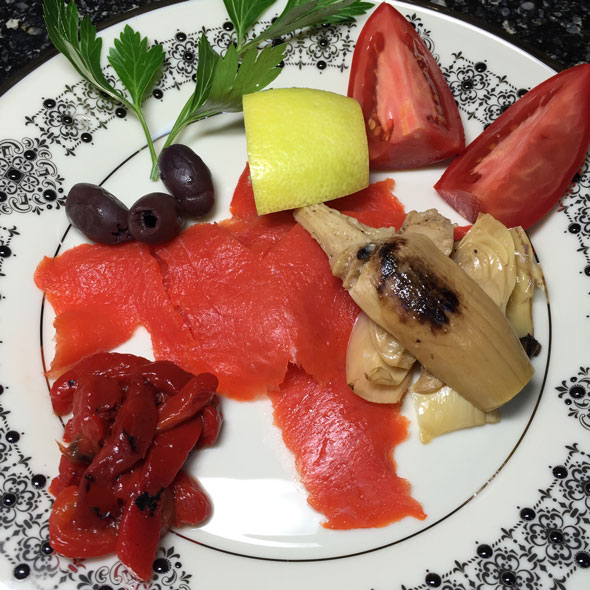 I have been serving a hearty appetizer around 5p, while we watch the races live on the internet. After the events conclude, we eat dinner - around 7p - and by the time the dishwasher is started, NBC is beginning their Prime Time coverage and we can watch it all again... except this time, dubbed-over with announcers catering to an American audience. 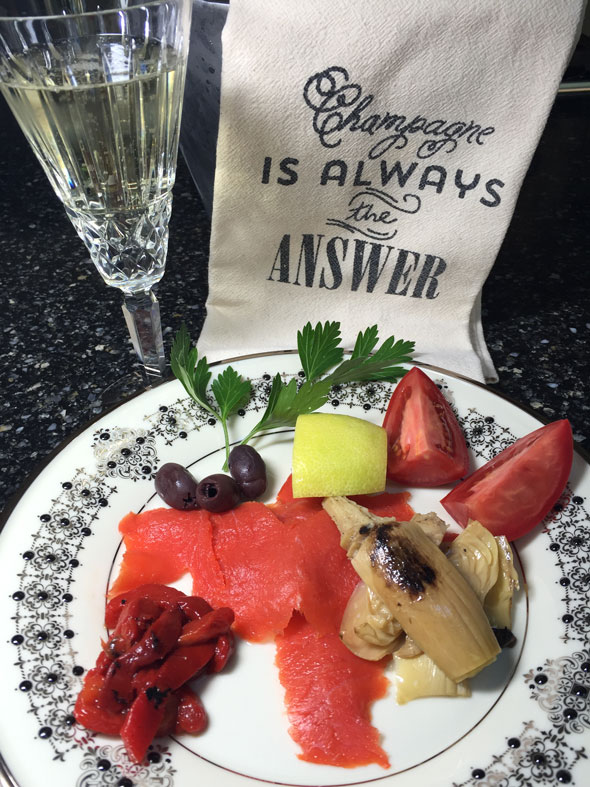 This evening, My Driver popped the cork on a bottle of King Estate bubbly for Good Duck Luck. 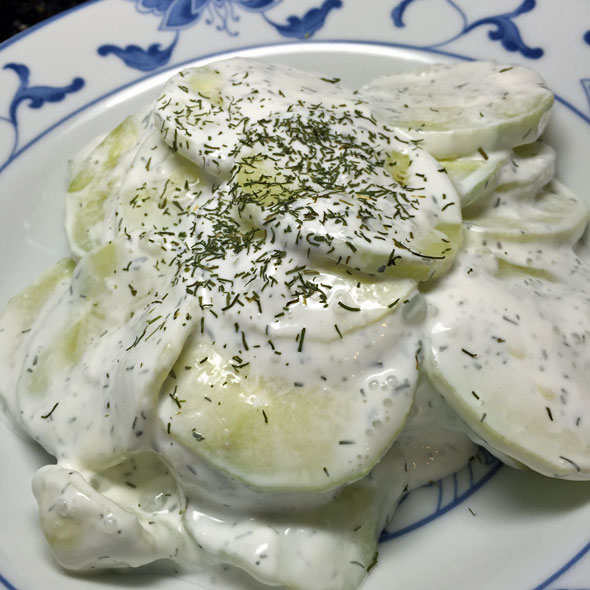 Cucumbers dressed in sour cream and dill is popular all over the Baltic and Scandinavia. No recipe required. 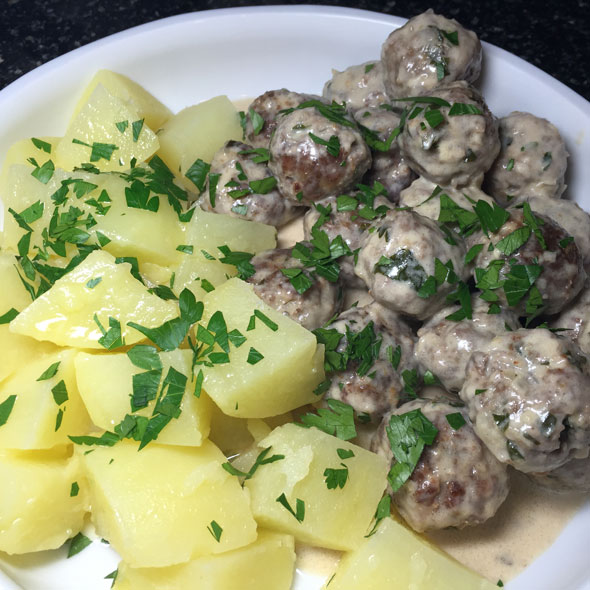 Dinner was simple boiled buttered potatoes (gosh, I really should make this more often) and Finnish Meatballs. Meatballs are extraordinarily popular in Finland. I followed the basic instructions/ingredients from a New York Times recipe, with a few exceptions. 1) I halved the recipe... and it still made two dozen walnut-sized meatballs. 2) I used one pound ground dark turkey. No beef. Definitely no pork. 3) I skipped the entire milk and sliced bread part completely after scanning reader comments about the recipe, and just used 1/2 cup panko breadcrumbs instead. 4) I made the meatballs, rolled them in flour, browned the meatballs, then moved to a plate, refrigerated, then poached them when we were ready to eat. DT really liked the meatballs and asked if I could make them again sometime. The allspice makes the meatballs!

Hey, for me, this is basically following the recipe. 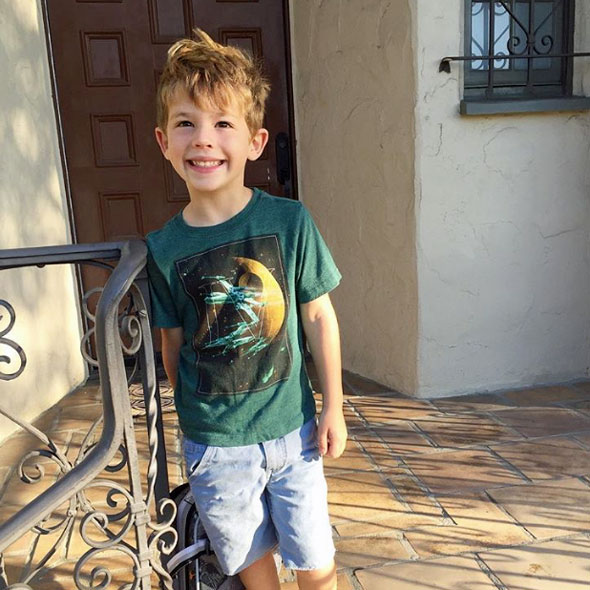 And now for something very special. Hold on to your hats. Leo started Kindergarten today. Real school. He only knows one kid in his class, but he jumped right in! We video-chatted this afternoon and Leo excitedly told me about his teacher and spelled a word for me. I was so proud of him and exclaimed how amazed I was that he could spell a word after only one day of school. His reply? Yes, and we have a lot of reading to do too, Bubbe.