Portland, Oregon:  Two foodie events today to keep us well-fed and entertained. Best part? We get to meet such interesting people, enjoy delicious foods, learn so much, and My Sister, Renee, joined us for the morning session at FEAST PORTLAND's Grand Tasting at Pioneer Courthouse Square. 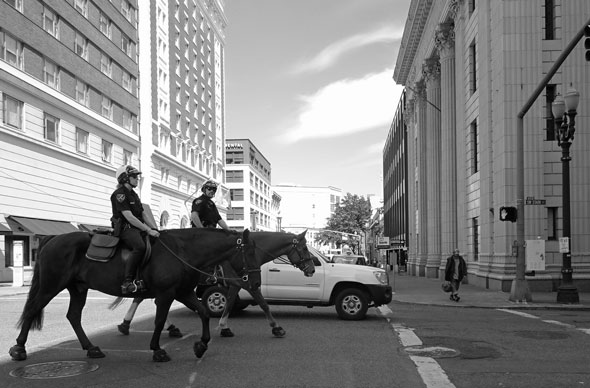 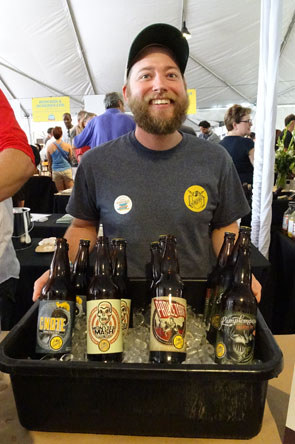 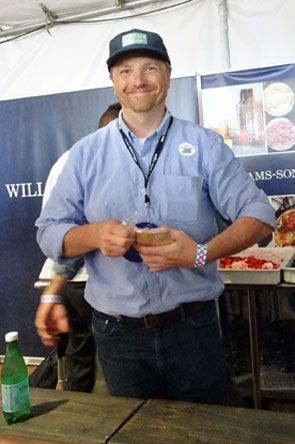 Sweets galore, and an obligatory photo of my food-crush, Ben Jacobsen of Jacobsen Salt Co.
Jacobsen Salt is now available at Williams-Sonoma.

Renee, DT and I walked up and down every aisle, testing and trying anything that caught our fancy. There was such a large variety of foods to taste and so many interesting purveyors to meet. 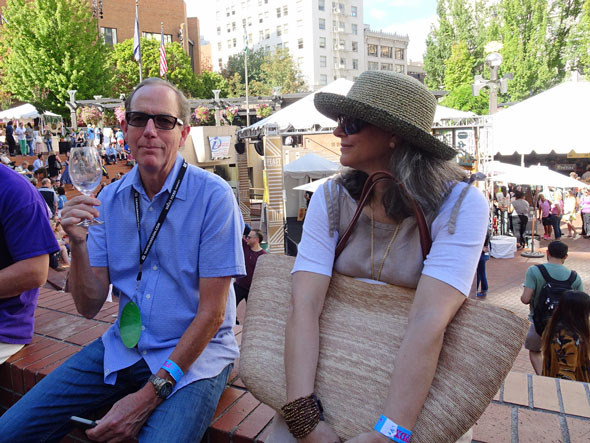 We met Pam and Dave, a couple on vacation from Minnesota. They are in Oregon to attend the food festival, tour through the wine country, visit the Oregon Coast and essentially enjoy Our Great State. Welcome! 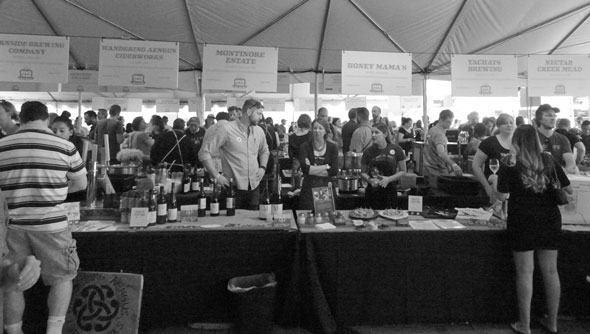 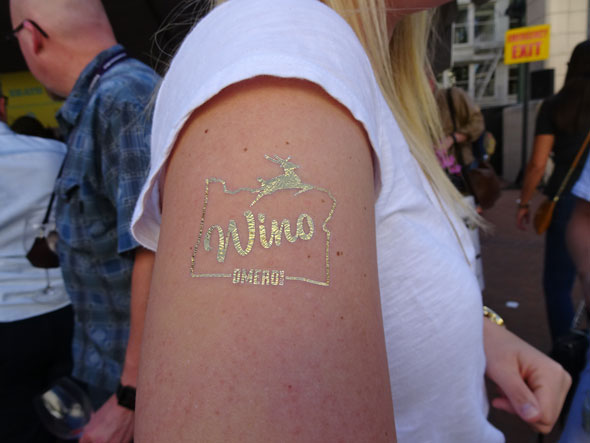 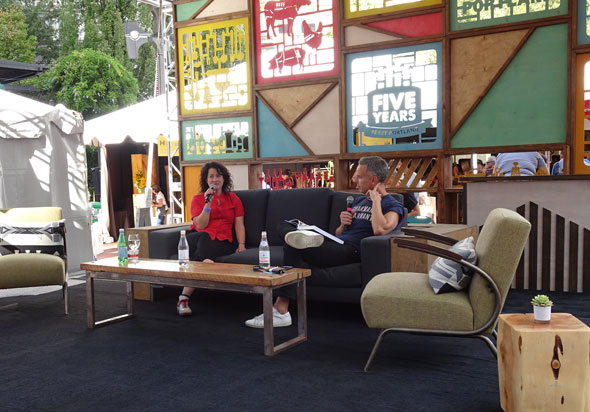 There was a bit of time for a rest - before we had to head out to the evening event.

And here is where I must admit to being the Worst. Blogger. Ever.

I just can't be bothered to schlep my huge DSLR camera to these events. It is enough trouble to hold a wine glass, manage my little purse, and a bamboo plate containing the latest morsel. Dave and I are in a constant balancing act - holding wine glasses or plates for each other - where would I put a huge heavy camera? Definitely in the minority here. I saw enough megapixels today to sink a raft on the Willamette River. I saw a woman with a lens so large, she had to stand across the river in order to take a photo of a taco at the event this evening. Most people were taking photos with their phones... but most people were in their 30's. I used my little Sony DSC-HX90V. Excuse any blur. I'm only one woman. 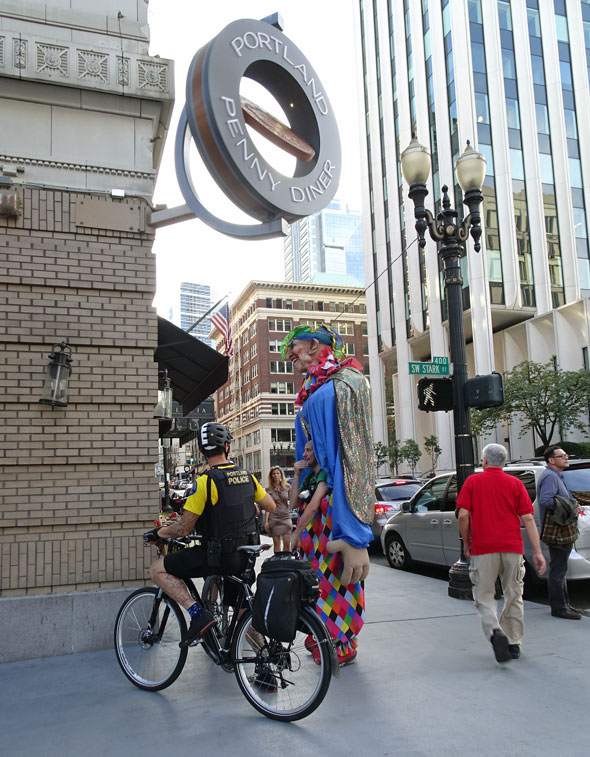 Again, we took the light rail/street car to and from the event. On the way to the train, we saw this (above) very interesting street performer talking with Portland Police (this time the cops were on bicycles instead of horses). They were telling the clown guy how terrified their kids would be of his costume and DT and I remembered how freaked Leo was about three years ago when he saw the USC mascot remove his "head". Goodness, kids are so afraid of clowns. Can't say I blame them. The face on this harlequined dude was totally freaky. Look at the size of those hands. Nightmares for weeks.

Last year, Portland opened a bridge over the river for light rail, buses, emergency vehicles, people and bicycles only. No cars. The festivities tonight were at the base of the new bridge, along the water. 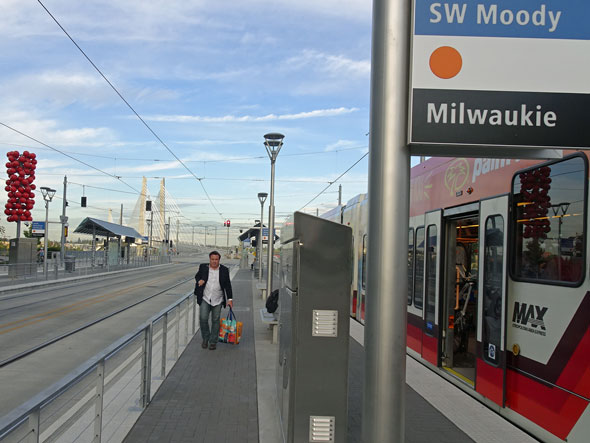 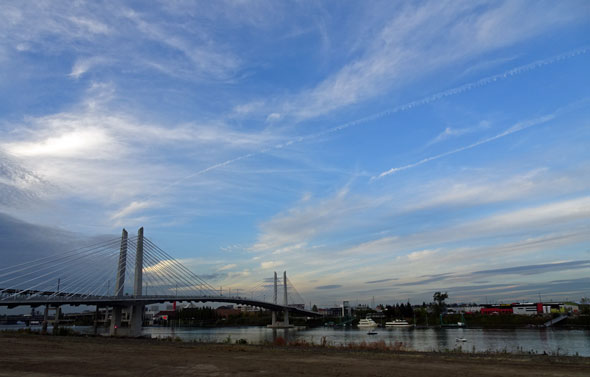 The Tilikum Crossing Bridge over the Willamette River in Portland, Oregon

The Night Market is the marquee event of the four-day FEAST Portland festival. This year they had a "Latin" theme - anything from Mexico City to Madrid. Lots of tacos tonight and, mercifully, little pork! 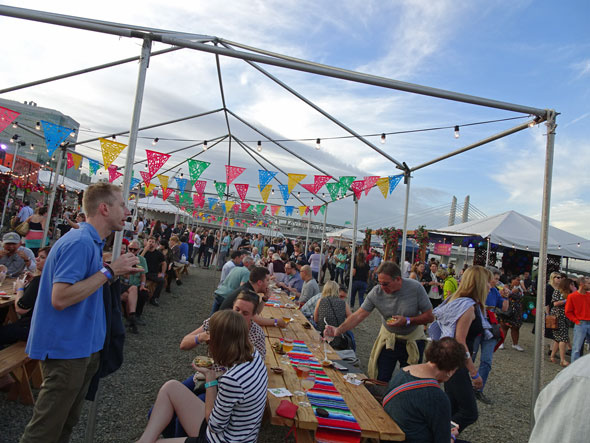 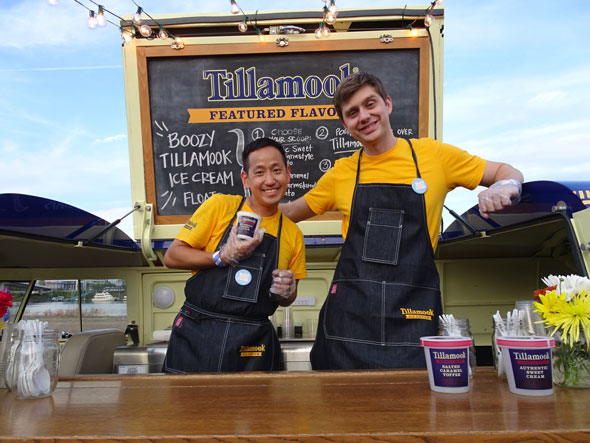 Dave and I figured-out a plan. Stand in line to sample something... and while still eating the item, stand in line to sample something else. I learned last night to venture up the front of the line, read the ingredients and have a chat with the chef. Every single chef I spoke with were super friendly, helpful and generally willing to chat - no matter that they were being slammed with long lines of hungry guests. While I quizzed the cook, Dave waited at the back of line. If it was determined, after my convo with the chef, that it was something we would not/could not eat... we simply moved on. Easy. 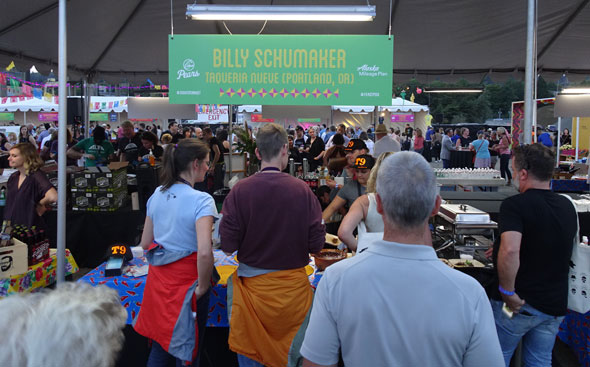 Not a lot of moving-on this evening. We seriously dined in style on amazing foods. The best thing we had tonight was a shredded beef taco from Podnah's BBQ Pit (in NE Portland). Podnah's is a usual Southern BBQ place. They do not have a taco on their restaurant menu. 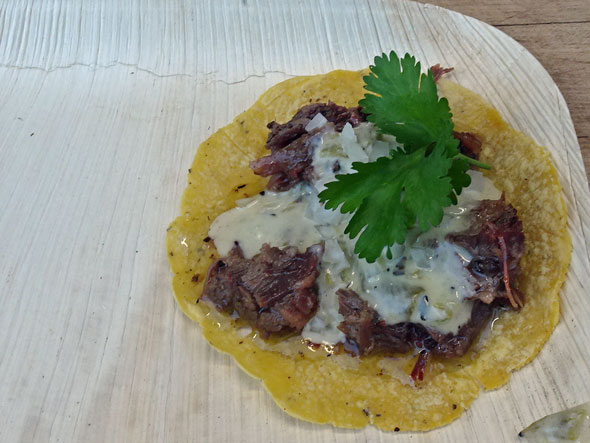 Blew us away. Made from (Snake River Farms) beef ribs and served with a super-spicy cheese sauce and cilantro. It was a teeny little thing, so we had to get to the back of the line to try it again and make sure we weren't dreaming. We were not. Hands down. Best.

Okay. It's not Taco Gonzalez... but that is a wholenother situation. 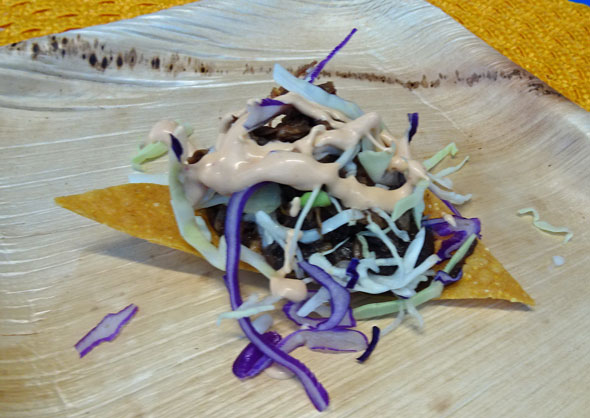 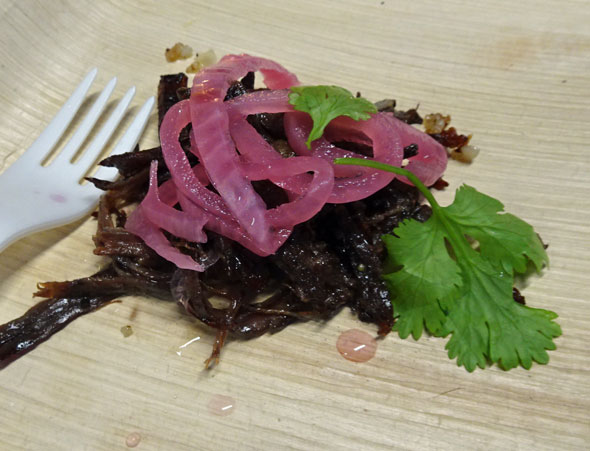 More beef! This time served on a bed of rice (with foie gras) and topped with pickled onions 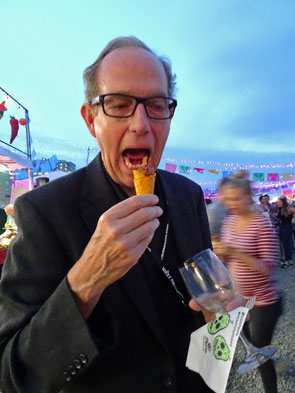 Chef Jose Chesa, of Chesa in Portland, served duck tartar in a corn cone! The bottom of the cone was filled with avocado, then the duck, topped with orange sweet potato, crispy plantain - with pimenton-garlic salt sprinkled over. DT tried this cone - I prefer my duck cooked. 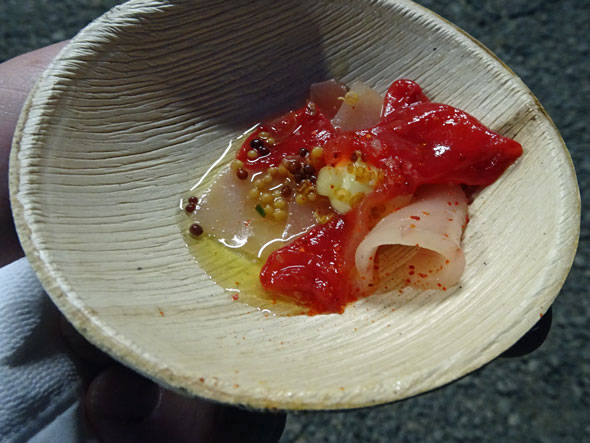 We both loved the albacore tuna ceviche with pickled watermelon and toasted quinoa from Chef Alex Barkley's Manolin Restaurant in Seattle.

We tried several other dishes, talked to all sorts of interesting (or fabulous!) people and signed-up to win all sorts of fabulous prizes. And then it was dark. 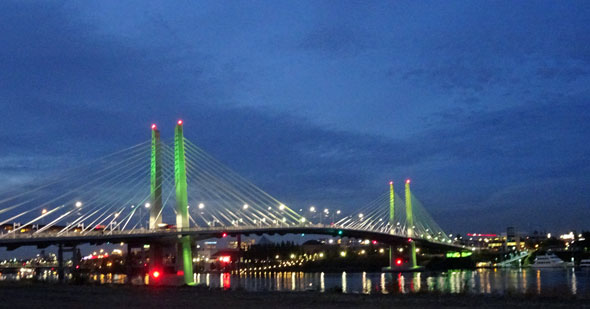 And the bridge was so pretty. And we took the street car back to our hotel.

Tomorrow? Guess what? More events... and something about a Duck football game in Nebraska?

Until my next update, I remain, your spicy & beefy correspondent.