Portland, Oregon:  I am a country girl and am reminded of this every time I sleep in a city. 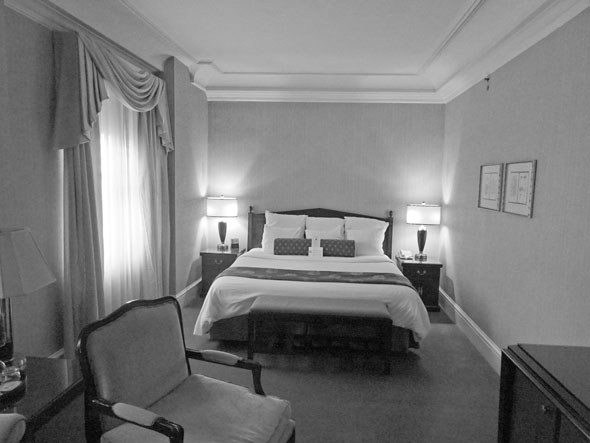 I woke in the middle of the night due to a flashing light in our room. Like a strobe light blinking across the ceiling above the bed. Was it a fire alarm? No. Pretty sure I was having some sort of seizure? Stroke? Then I realized it was accompanied by a beeping alarm. (Unfortunately, I do not think strokes or seizures are accompanied by beeping warning alarm signals. Dang.) Looking out the window, we determined a garage door alarm (to alert pedestrians that a car would soon emerge from a subterranean parking garage to cross the sidewalk) was sounding. But the garage door was not opening. There was no car. People started yelling. The "unhoused" were being disturbed. The "housed" were being disturbed. Thirty minutes later, the beeping and flashing suddenly stopped and we drifted back to sleep, only to have the whole ordeal start again a few minutes later. Later, we slept again, only to be slammed awake by a garbage truck apparently unloading a dumpster filled with - obviously - glass.

We talked about the noises this morning and remembered the years we lived in urban Manila. So much noise - day and night. We adjusted. My sister has lived downtown for six years and has learned to sleep through the sounds of the city. Dave and I decided it is much better to be awakened at night by coyotes yapping, owls hooting or frogs croaking.

There was no foodie event to attend this morning - which was a good thing due to our crazy sleepless night. And, let's not mention that it began to rain sometime early in the morning. Our Big Adventure was to find somewhere (other than our hotel room) to watch the Oregon v Nebraska football game on television.

There was a sports bar across the street from our hotel, The Independent, so we ventured over. After determining it was a good place to park ourselves for several hours, we invited Renee to join us. 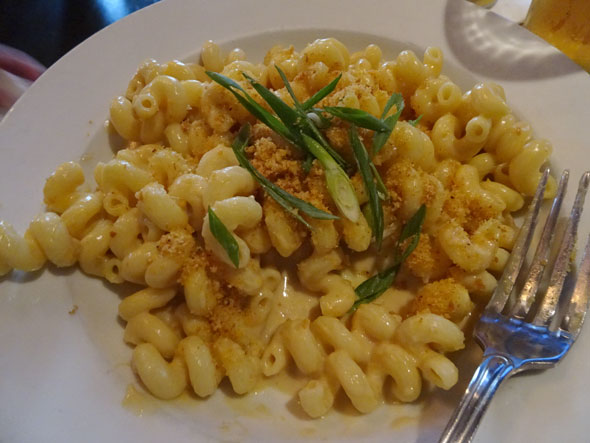 Mimosa, Fish & Chips and Mac & Cheese made with stout beer

The Ducks lost to Nebraska at Nebraska in a sea of red jerseys. DT feels the officiating was terrible.

After a good long nap in our hotel room, Dave and I headed out again on the train to the next FEAST PORTLAND event - Smoked! Our information packet told us to go to the Zidell Yards (where we were last night for the Latin Night), but there was nothing going on at Zidell Yards. The place was being dismantled. Huh?

I went online with my phone and learned the Smoked! event was being held at a city park in the downtown Pearl District of Portland. Since when? No matter. We simply switched direction on the light rail and went to the park... all the time wondering if we were losing it and had mis-read the instruction packet??? 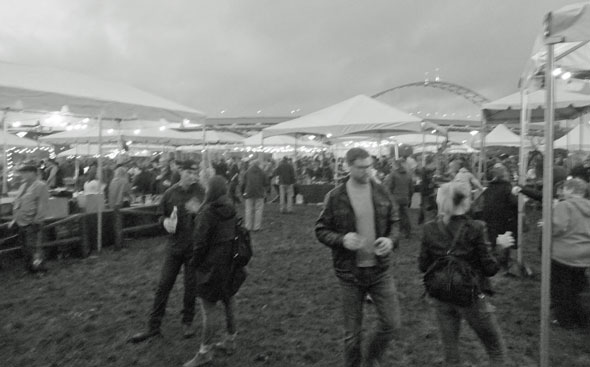 We had Smoked! Oregon lamb shoulder with roasted carrot hummus, cucumber riata and pita crumbs from Chef Ben Bettinger of the famed Laurelhurst Market in Portland. 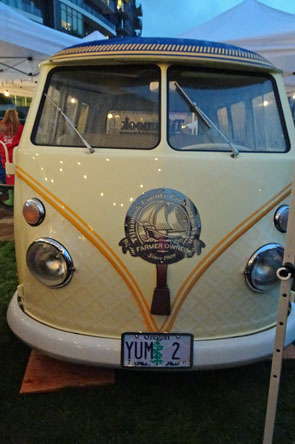 Cooking for a crowd at Smoked! - and a cowbell on a Tillamook Creamery VW van

We had a glass of (not Smoked!) champagne. From France. We had ice cream with Smoked! caramel sauce. But mostly we tried to not sink into the mud. It was a very miserable evening of sloshing about on soggy sod. The girls in rain boots may have look unfashionable, but they were not ruining a pair of nice shoes. Like me. I was not having a good time. It was wet and mucky. 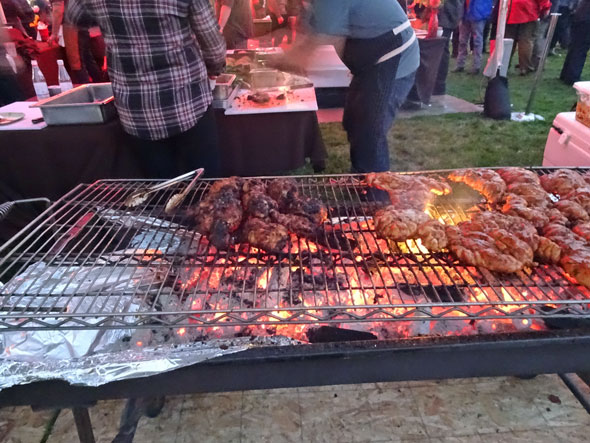 After sampling everything we wanted to try, I asked DT if we could please please please go back to the hotel. We walked the drizzly 11 blocks back to our room in no time (16 minutes) at all.

When we arrived to our room, we checked our printed schedule and the information provided to us by the festival was incorrect. FEAST PORTLAND told us to go to the wrong location tonight.

Don't mess with The Goddess.

You know those "shoe mitts" they have in hotel rooms? I think tonight was the first time I have ever made use of one. Our shoes were caked with mud and grass. A disgusting mess. We cleaned-up and went down to the lobby bar for a nightcap. One more event tomorrow, Dear Readers. In predicted pouring rain.

Until my next update, I remain, your muddy correspondent.