Los Angeles, California: We had a fun day with friends at the Rose Bowl in Pasadena, watching the #13 Ducks beat UCLA. Not sure what to expect, as a few of the best Duck players are out with injuries - including our quarterback... but Our Boys showed up today. GO DUCKS!

It was a sunny day - nearly 80 degrees - just a perfect day to enjoy sunny California. The drive to the stadium is only about twenty minutes, but it took forever to park and we had to walk quite a distance to the Rose Bowl. In the sea of cars, there was also the distinct possibility we would never find the (hybrid) car again after the game! 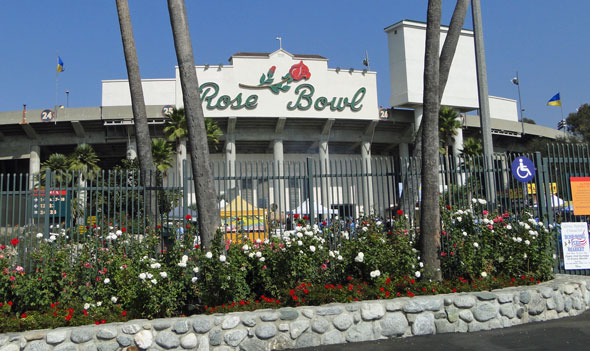 The Rose Bowl in Pasadena 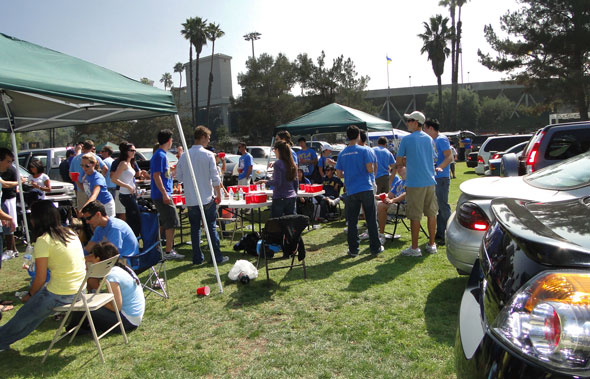 Party in the Parking Lot (which is a golf course): More beer pong

We met DT's college roommate, Bruce, and his daughter, Sierra. We also met DT's college teammate, Gary and his wife, Kim. After securing our tickets and having a snack, we were herded into the stadium, along with 77,819 of our closest friends. 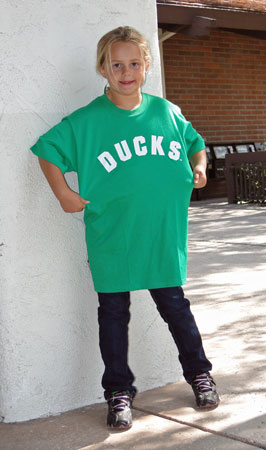 Sierra - ready for the game 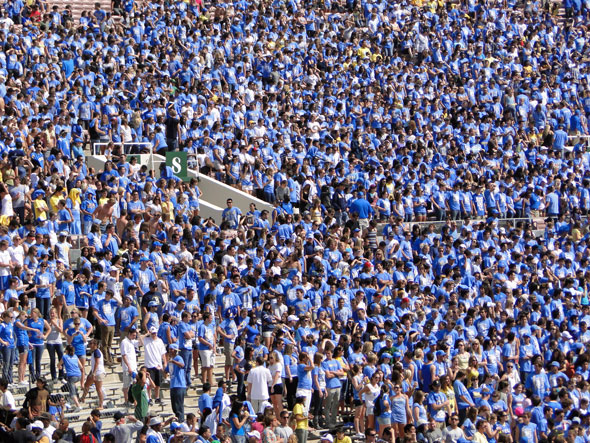 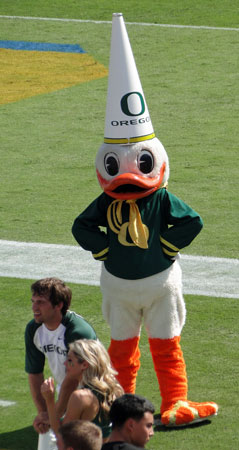 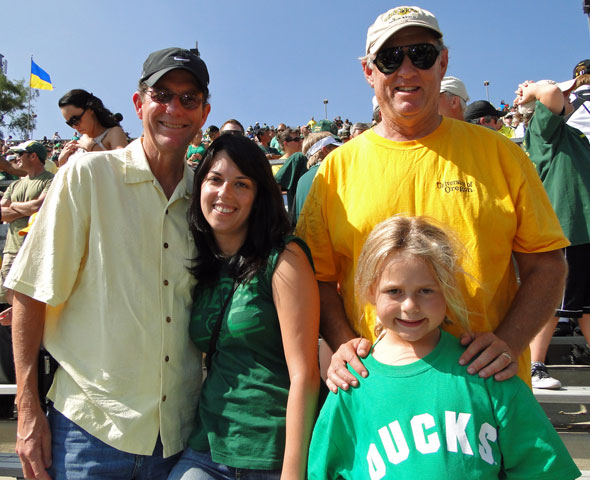 The roomies with their daughters - both only-children born 21 years apart! 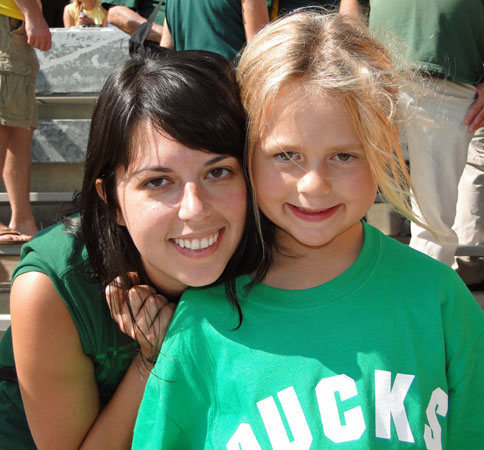 Poor DT. Best Father Ever. Lisa wanted a bottle of water and DT left the stadium at half-time to fulfill her request. By the time he returned to his seat, the Ducks had scored twice and he missed the excitement... and was not able to see the plays until he watched them on television hours later. Super Dad. 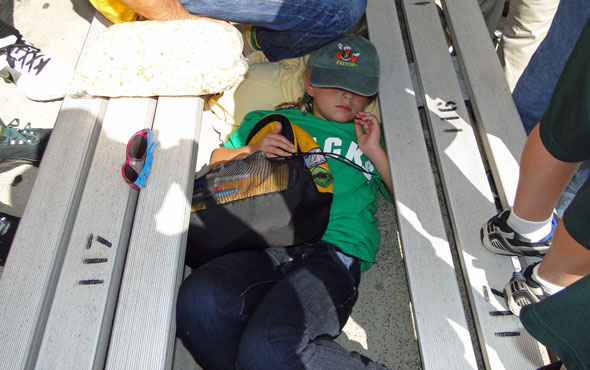 Sierra didn't make it through the entire game

Duck fans in the crowd

Rose BoWe had great seats... unfortunately most of the action took place on the opposite end
wl Panorama 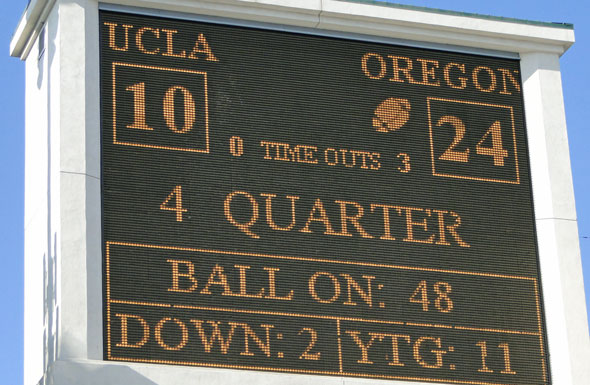 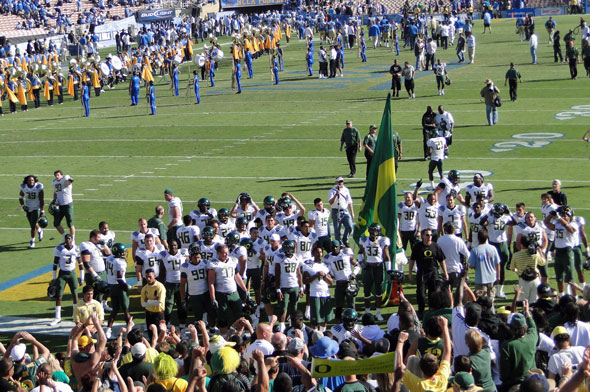 After every game - home or away - the Duck players pay homage to the fans. I just love this tradition. The fans were very proud of the young Ducks this afternoon. Unfortunately, it wasn't the same for the UCLA crowd. Most of the UCLA fans left in the third quarter... and the rest of the Bruins trailed-out in the fourth. After the game, their coach, (ex-Husky coach) Rick Neuheisel, spoke to the crowd over the sound system. Neuheisel basically apologized and promised to do better next week. It was very surprising to hear this speech!

We had enough sun and fun today in Pasadena. The traffic situation leaving the Rose Bowl was ridiculous. I am sure people living in Pasadena are ready to jump off cliffs weekly due to the traffic flows before/after games at the Rose Bowl. We were literally in a five-mile-per-hour traffic jam for an hour leaving the Rose Bowl. The stream took us through random neighborhoods - bypassing several easy freeway on ramps. We will never understand the traffic situation... but one hour later found ourselves back to Lisa's house.

That little garden Lisa and I planted last month provided a lovely salad for our dinner and a perfect basil pesto for salmon filets. Toss in Italian flat-leaf parsley for the couscous and you have a perfect meal. The previously-mentioned Father of the Year walked down to the corner liquor store to purchase a bottle of The Widow to celebrate the Duck victory. Dinner was a gourmet feast! 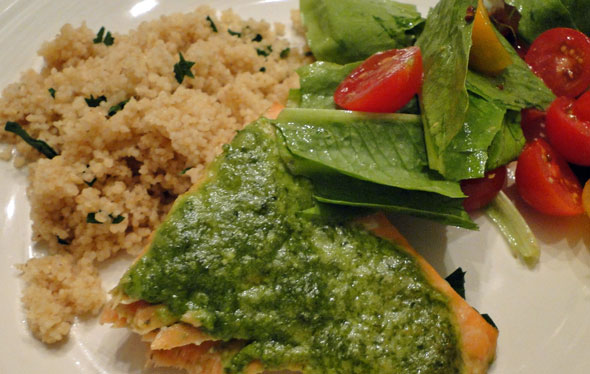 I am over. This was a great day. We had too much fun. Too much sun. And maybe too much champagne and pesto.

Until my next update, I remain, your DUCKS RULE correspondent.