I have so much to share and so many photos to post today. It has just been a whirlwind of activity the past few days - and I mean what I say. We have been busy and a whirlwind touched-down in the Rose Bowl area Wednesday, ripping vendor tents from the ground and swirling them up in the air like plastic shopping bags caught in a dust-devil. Several people were injured. The Lovely Lisa and Lenny invited our entire tailgate crew to their house on New Years Eve. She decorated the house with 144 red roses (a dozen dozen) and served catered "heavy appetizers" from Heirloom (including their fabulous and famous lasagna cupcakes) to about 30 guests. No one snapped photos of the beautiful spread of gourmet delights on the table, but we did take photos of each other! 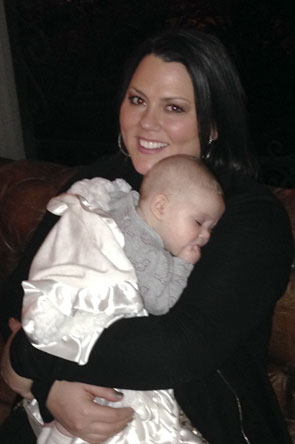 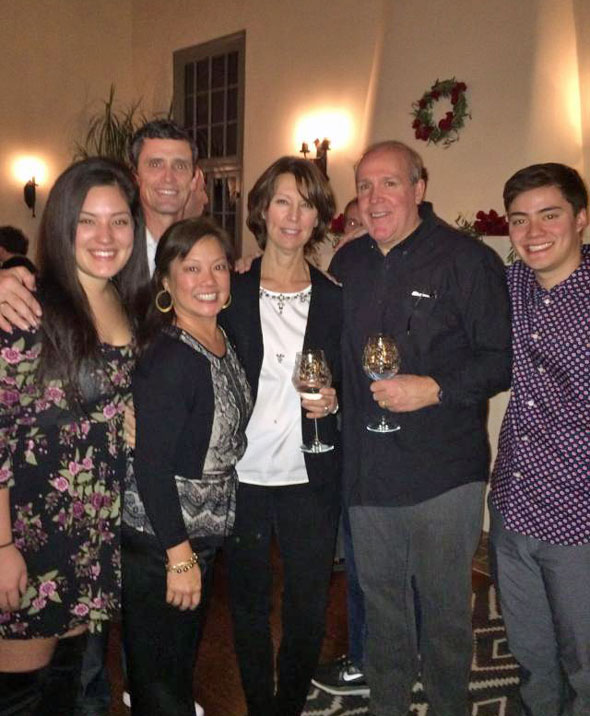 It was a fantastic evening - and we ended the party around 10p so everyone could back to their hotels safe and sober to get plenty of rest for The Big Game.

Game Day loomed sunny and cold. There was frost on the lawn in the make-shift RV campground at the Rose Bowl. Generators started at 6a. Green and Yellow balloons were filled with helium. Fire pits were stoked. Music was blasted. Bags of ice were dumped over beer-filled coolers. Crockpots were simmering. Grills were lit. By 10a, the RV parking area was swarming with fans. Duck fans. We counted only two Florida State motorhomes. (Can't fault FSU fans for not driving their RV's across the country; I'd fly too.) 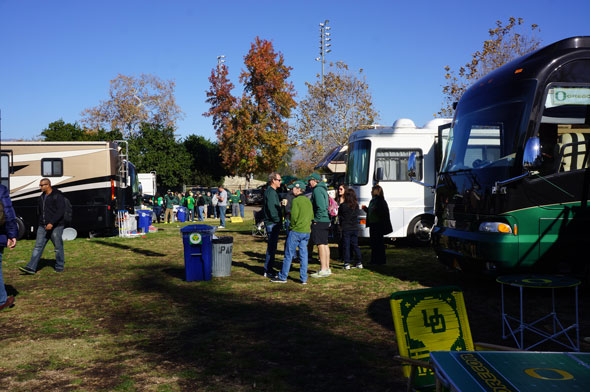 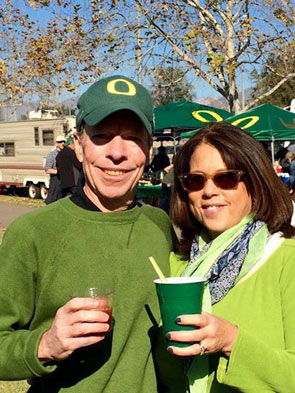 Carolyn & me - and Dave's college roommate, Red, with his wife, Marcia 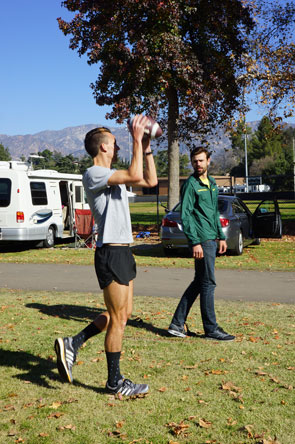 Lenny brought his friend, Nick - and it wouldn't be a Taylor Tailgate without a few professional runners: AJ Acosta and Mac Fleet toss the football before the game. 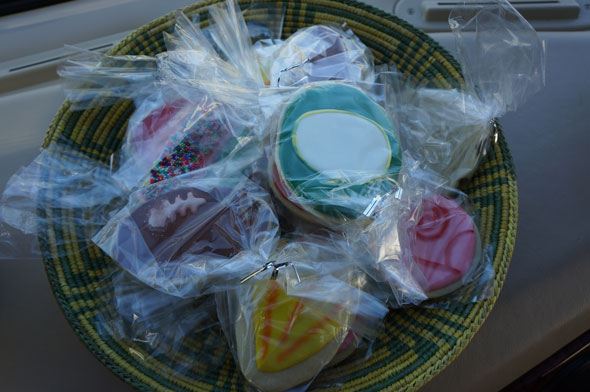 Rosie, of RosyCakes sent two dozen cookies for the partiy!

Dave and I kept our menu super simple this morning. I made hummus with black eyed peas (for good luck in 2015) and a batch of Super Top Secret Snack Mix. Lenny made his famous onion dip. Lunch was a "make it yourownself" sandwich bar. No one complained.

Game Time! We headed into the Rose Bowl stadium with 91,300 of our closest friends. 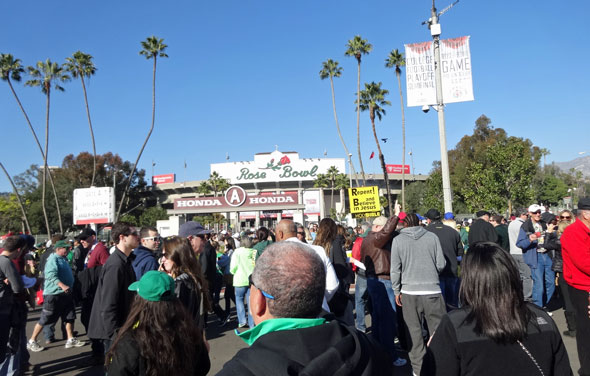 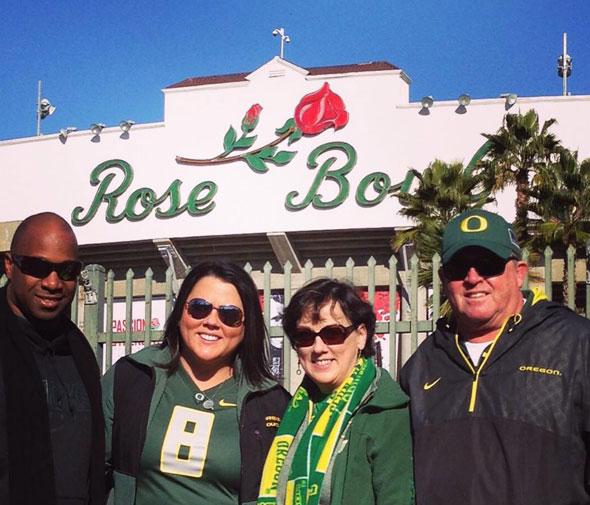 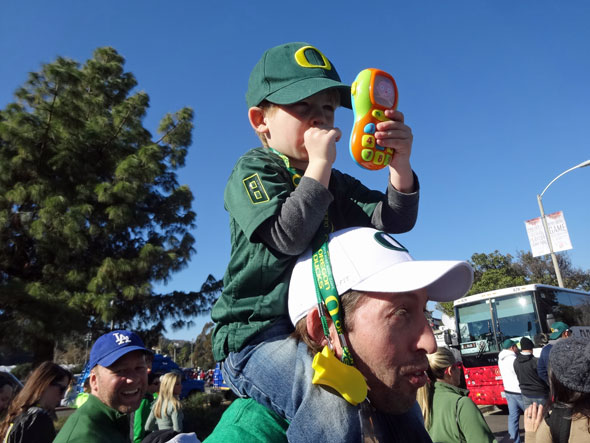 Like everyone else, Leo brought his cell phone along 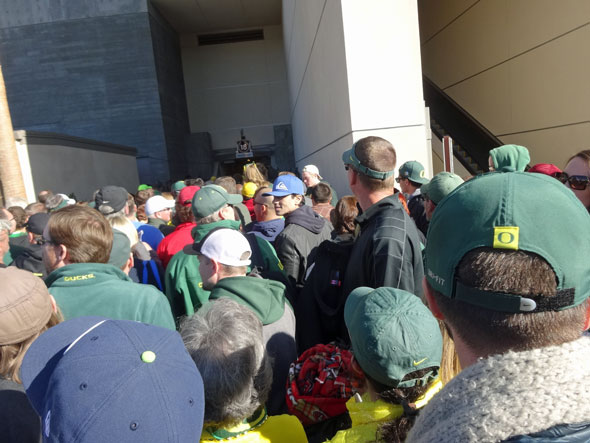 The tunnels are dangerously narrow in this old stadium. It took 30 minutes to reach our seats. 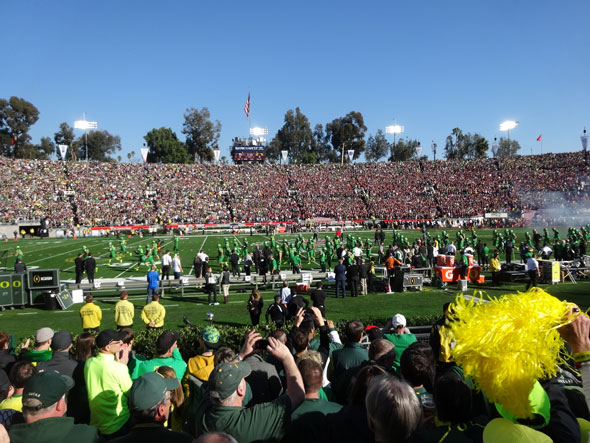 But it was worth the wait! Once again, DT secured 18 fabulous seats. 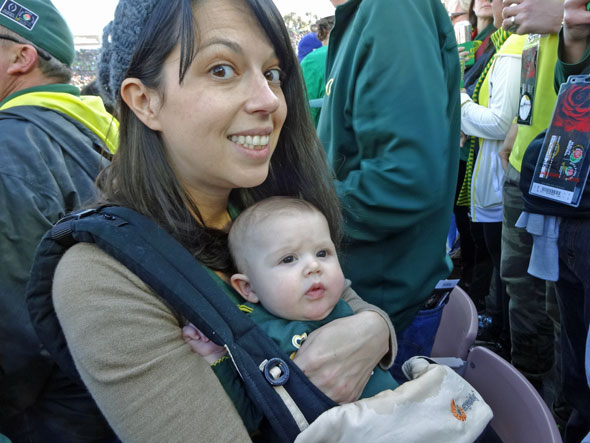 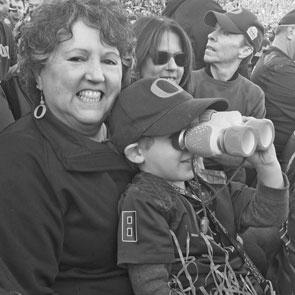 Angela - the Ducks enter the stadium Dave and Red - Me, holding Marcus Mariota (Leo says that is his new name)

Leo and Lucy (and Lisa and I) did not make it through the entire game - it was really cold and really loud - and we had radiant floor heat and a 47-inch HD TV in the motorhome. Lisa and I enjoyed the remainder of the game in warm comfort.

The annoying FSU tomahawk chop motion and chant was pretty quiet by the fourth quarter as the Ducks handed the Seminoles their first loss in 30 games, 59-20, with many of the Oregon points scored on sloppy mistakes made by FSU. Turn-over after turn-over. 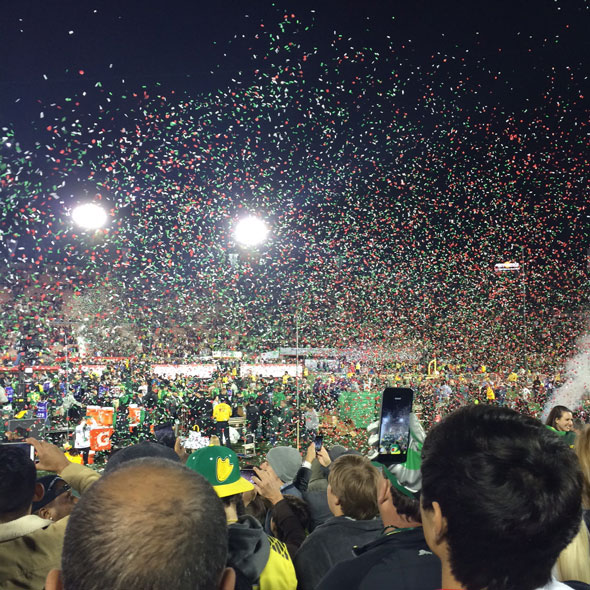 After the confetti settled, everyone came back to our RV to warm up. Angela counted 25 people in our motorhome. Champagne corks were popped. Congratulations to the Fighting Ducks - they are going to play in the first-ever college championship game in Dallas on January 12th v Ohio State.

As soon as everyone left, I opened my laptop and booked flights to Dallas.

Apparently, 100%. Until my next update, I remain, your Rose Bowl correspondent.
« Family Day Happy New Year »