Las Vegas, Nevada: I’ve finished-up everything in the fridge and we have been dining-out the past few nights at University of Oregon trustee socials gatherings (attending as a past-trustee now, as DT termed-out in June 2018) and local restaurants.

Time to hit the road.

Our route through the desert did provide us with hillsides covered in purple and yellow and, I must sadly report, there are now at least 100 less-than-a-billion Painted Lady butterflies migrating north to Oregon. They splattered constantly on our wind screen during the drive.

After checking-into our hotel room, we met Mary, Steve, and their youngest, Cory, for a glass of wine at the new Eataly complex at the MGM Park Hotel. I am so excited to tour through Eataly. We went to their Rome store and I just loved the concept – so much so that I brought a cooler along in the back of car to fill with goodies before we head back to Indio. (PS: Mario “#himtoo” Batali is no longer associated with Eataly) 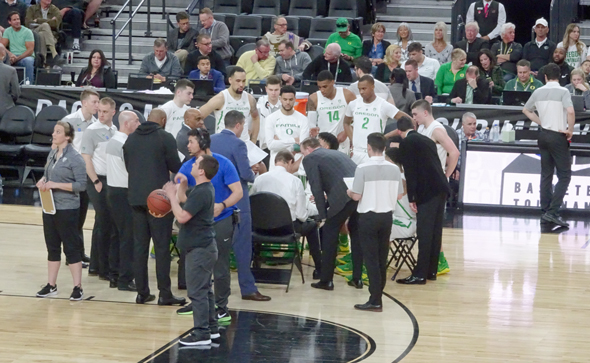 The five of us went to T-Mobile Arena to watch the two evening games. Colorado beat Cal by five, then the Ducks took the court to face Washington State – a team coached by one-time Duck player and coach, Ernie Kent. 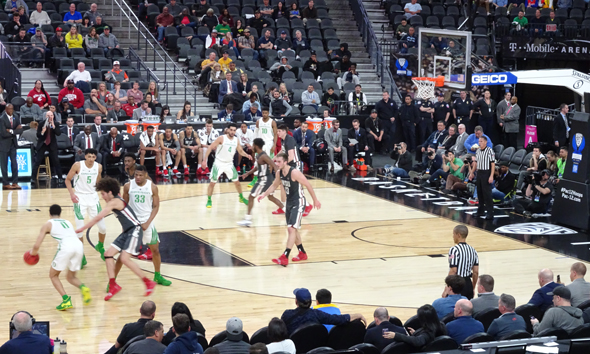 The game started-out being exciting, but as the Ducks continued to score and score, we lost a bit of our enthusiasm. The final score was 84-51. The Cougars really stunk-up the court tonight.

There was a bit of excitement as the half-time “show” was a basketball game between the mascots of the northern and southern division of the Pac-12.

This event proved very entertaining. Imagine playing basketball in a bulky (sweaty) costume! It really was funny. As happened last year, I believe the game ended in a 0-0 tie.

After the wonderful victory, we went to BEST FRIEND restaurant, recently opened by Roy Choi. The concept is quite interesting – the entrance to the restaurant looks like a convenience store in Korea. The shelves are stocked with every sort of Korean snacks. The “check out counter” is really the hostess desk, and patrons are escorted behind a series of two screens into a huge dining room – complete with DJ. 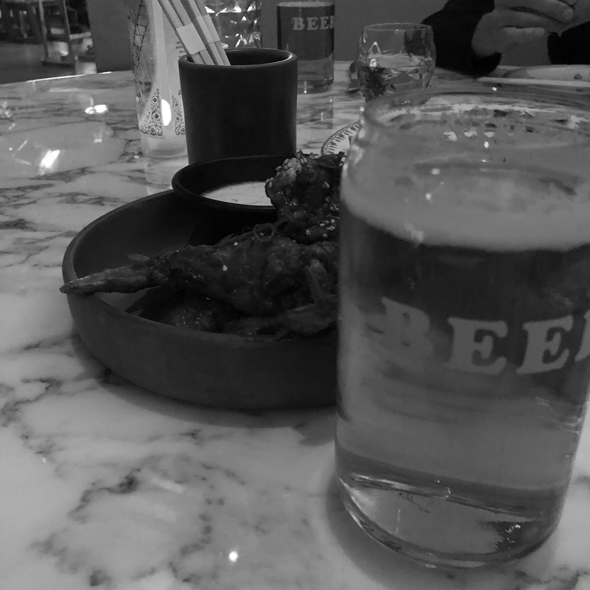 Best to go with Korean standbys: beer and wings. They were delicious.