Indio, California: Oh Dear Reader, please forgive my lapse in updating this website, but we have been basically house bus-bound due to the most terrible rainstorm and weather the Coachella Valley has seen in seventy years! Palm Springs averages just over 5 inches of rain per year, last Thursday it rained nearly four inches in 24 hours. Even for an Oregonian, this is a lot of rain. The desert just isn’t used to so much rain at once (or ever), and though an elaborate system of drainage canals have been constructed, many broke over their boundaries. Roads washed away. Flooding was extensive. Maybe you saw people being rescued by helicopters on the national news? 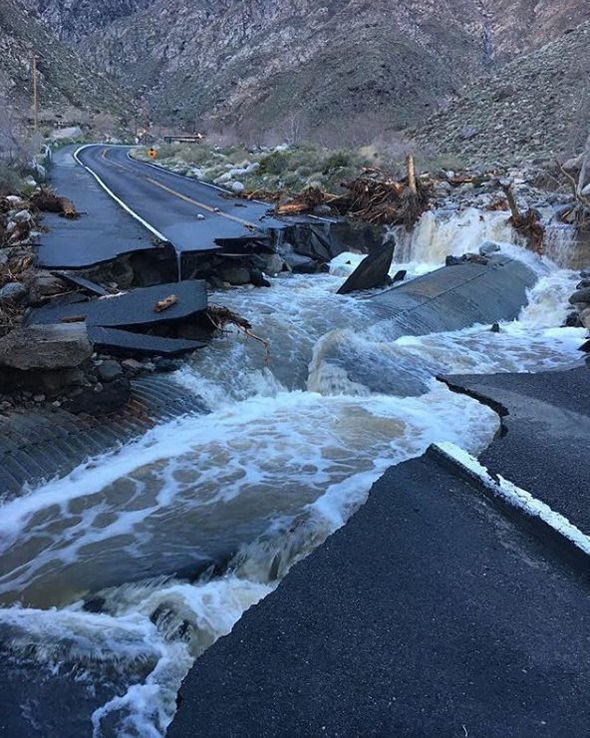 This was a common scene in the Coachella Valley – roads simply washed away. Another win for Mother Nature. There is so much snow, the ski resorts had to close… and often because the roads to the ski slopes had washed away anyway. 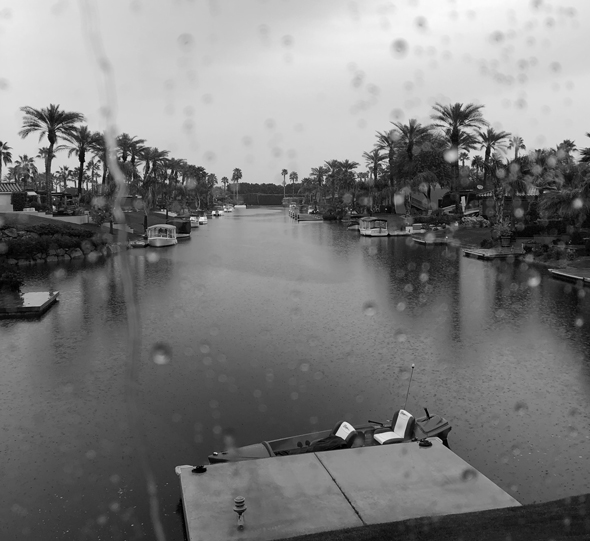 (Oh… that soggy kayak parked at our dock is not our soggy kayak – a friend is storing it here for a few days… wish the weather was better, as the kayak is electric and I’d love to give it a try.)

There have been days with me not exercising at all, and days of DT having to go to the fitness center (in the CAR!) to get-in a workout. The temperatures have not been in the 80s since before Thanksgiving – another weather record. We have been hovering in the 60s for weeks. Not pleasant. In Los Angeles, the rain and cold weather have also been a constant. Our grandkids are getting cabin fever.

The campers inside the Motorcoach Country Club are a hearty bunch – they still have to get outside to walk their dogs, but many tee times and tennis matches were cancelled.

This morning we woke to glorious sunshine and no wind! Everyone was so excited, as today was the annual Poker Run. This event (in this resort) involves teams trying to gather the perfect poker hand by visiting eight different stops – answering trivia questions, or even winning a challenge (bean bag toss, anyone?) before a card can be drawn. Our event is held on the water, so participants sail to/from designated docks to play their hand. Landlubbers use their feet, bikes or golf carts to get around. I believe cocktails play a major role in the game-winning strategy.

The weather was so beautiful, after we worked-out, Dave and I went to the Farmer’s Market in Old Town La Quinta, then to Solano’s Cafe for brunch. With the sudden sunshine, there wasn’t a table on the patio and we were forced to dine indoors. By the time we had finished our breakfast, the skies were dark, the wind was blowing and it was raining! What!?

I thought the boating event would surely be cancelled, as no one wants to drive a putt-putt boat in the wind. But, no – the boats were on the water and the event had started as we returned from the market. 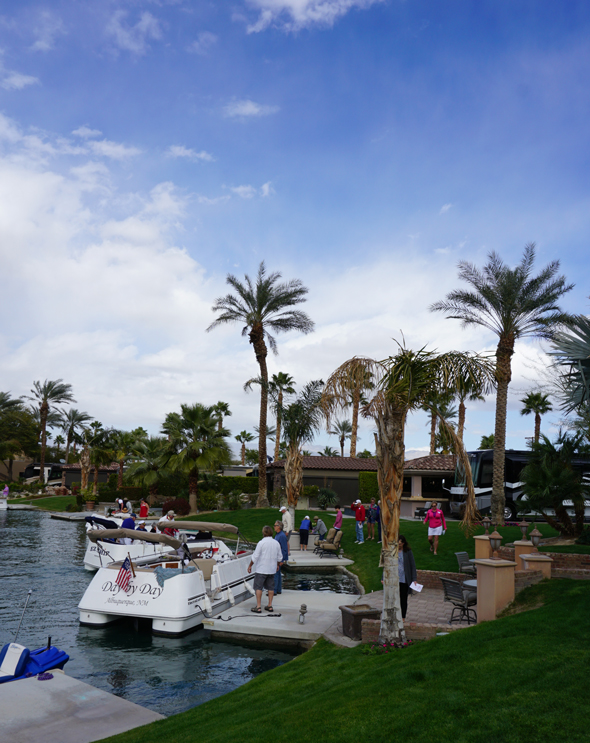 Our neighbors, Colleen and Rick, always volunteer to be one of stops during the Poker Run. It is always fun to watch the crazy confusion as boats fight to get a spot near-enough to get to Colleen and her deck of cards. 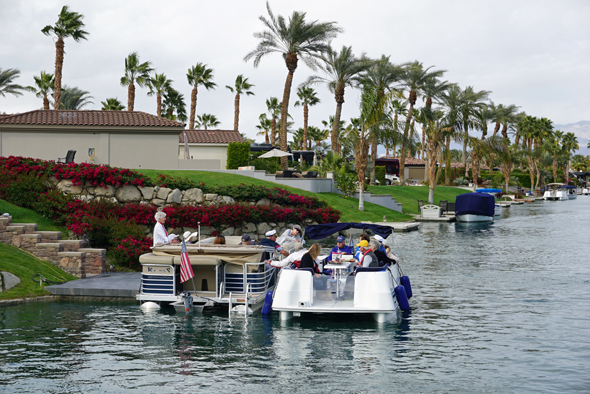 Boats tie-up next to boats. 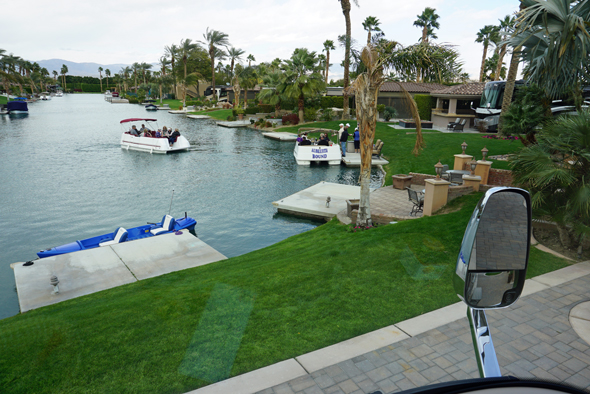 I watched from the driver seat in our motorhome. Too cold. Too windy. Just sprinkles though.

Some bragging news not related to weather: it is time again for the annual fundraiser party and auction at Leo’s school. Once again, I stitched a pillow and it was recently finished by my fabulous friend in Portland. Our housesitter mailed the finished pillow to Lisa this week: 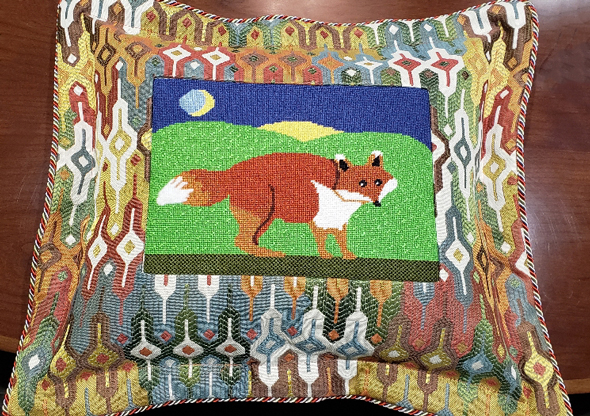 A cute little fellow, stitched in silk and put into the prettiest fabric. He has a fuzzy tail (stitched in a fiber called “Santa’s Beard”) that doesn’t show-up well in this photo. Hope this pillow earns a little cash for Leo’s school and looks nice one someone’s sofa.

And, no, the weather is not supposed to improve.

Until my next update, I remain, your cold and soggy correspondent.