Los Angeles, California: Our day was jam-packed with activity, and some actual jam. First stop was brunch in Atwater Village at The Village Bakery & Cafe. Lucy had toast with jam. Leo arrived in his baseball uniform and we went directly to the field for his T-Ball game. 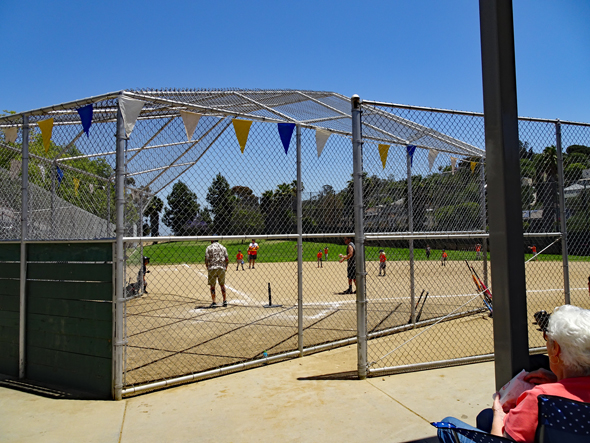 Leo's team (The Astros) played The Yankees today at a fabulous facility in Silver Lake called Tommy Lasorda Field of Dreams. The park has one field, shaded bleachers for fans and they offer free snow-cones and popcorn for fans. 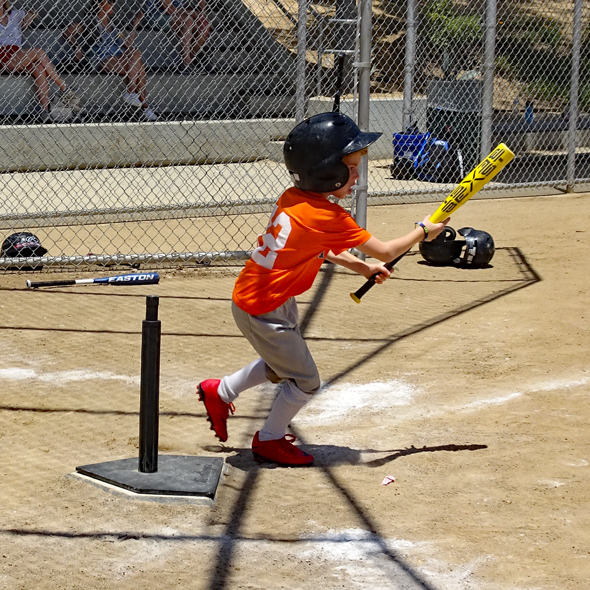 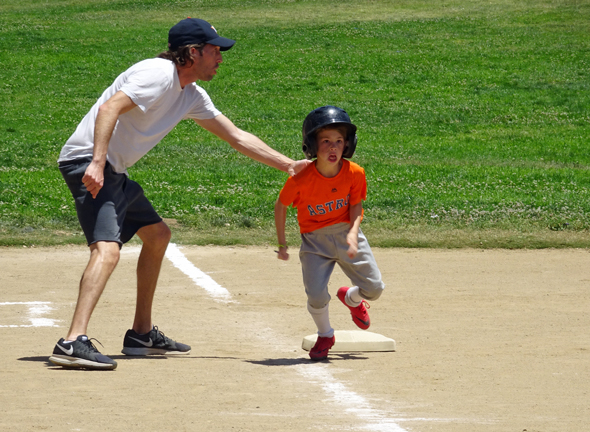 Lenny was the 3rd base coach today.

Leo scored every time he was up, but (I'm pretty sure) every kid scored every time they were up. (Dave thinks the score was 800 to 900.) In T-Ball, an inning is over when every player has batted once. Outs and runs are not scored. No one keeps score because no one can count that high. 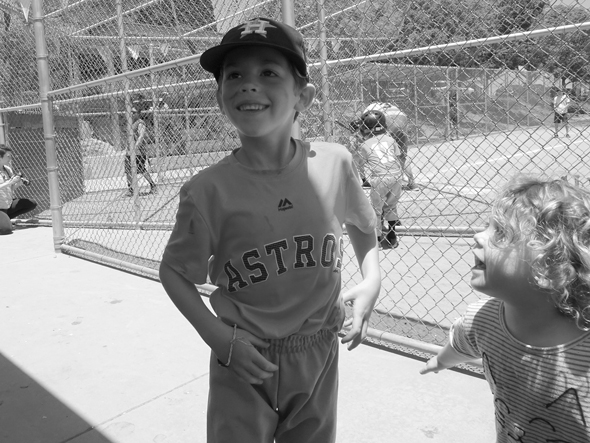 One happy boy (and his sister)

After the game, players thanked each other. It was just a really fun contest, and it was nice to see so many grandparents at the game!

We had a double-header today: Lucy's ballet recital in the afternoon. Immediately after the game, we all rushed back to Lisa and Lenny's to get Lucy into her recital costume - including hair and make-up. 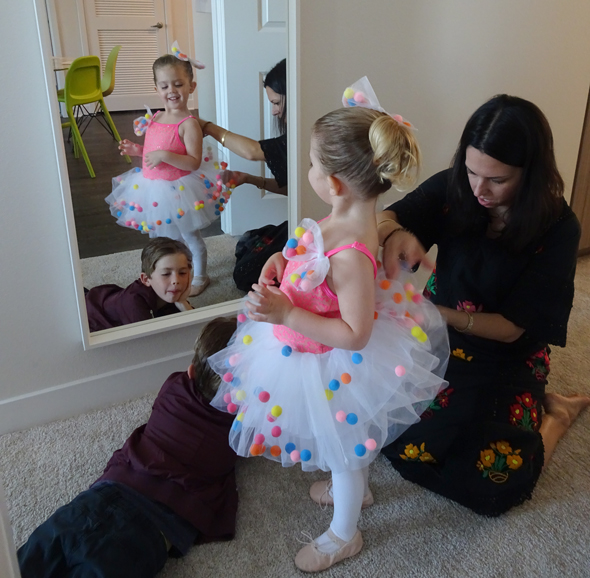 Lisa, adjusting all the dingle-balls hidden inside the netting of Lucy's tutu 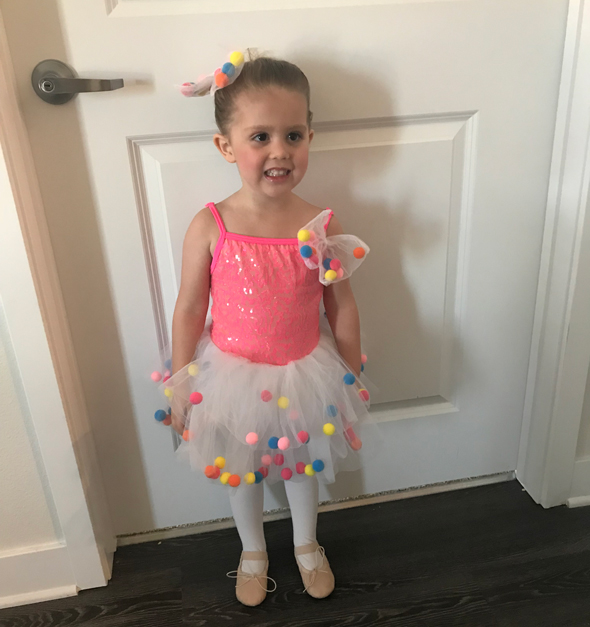 I can't tell you how difficult it was to tame those curls and get them all into a pony tail (as required by Lucy's dance instructor). Hair pomade and bobby pins were involved... and then the lipstick, rouge and eye shadow! Lucy was so cute and so excited for her performance, but she was not nervous. This was her second recital. She is an experienced veteran now. At three years old!

Then a mad-dash to the theater where we watched THIRTY performances. Each lasted only a few minutes, and we were never bored. I laughed and I cried (tears of joy). The dance school switched-out adorable toddlers amongst high school ballet dancers, tap dancers and many hip-hop performers. The little ones really tug at your emotions though. So adorable. No one doing the right move at the right time. Half of the class going right, while the other goes left. They all looked so dang cherubic in their voile and sequins. 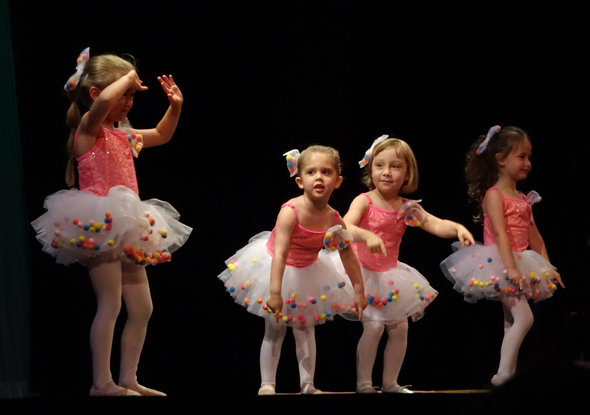 Lucy, second from left, was the tiniest dancer. Again.

Lucy did very well and showed not an ounce of stage fright. She owned her performance... yet notice not one girl is doing the same thing (at the same time) in this photo. They are three.

Our day continued. After the performance and every dancer getting on the stage for a group bow, we went to pizza, finally relaxed a bit, and rehashed our favorite moments from Leo's game and Lucy's recital. Then, Lisa and Lenny went to a party and we took the kids back to our hotel for a sleep-over. 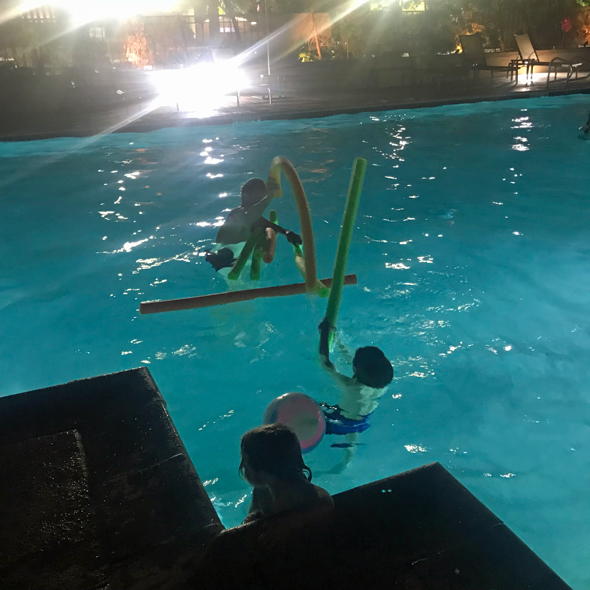 Okay. Maybe not for sleep. Maybe for a late-night dip in the pool and room service ice cream. 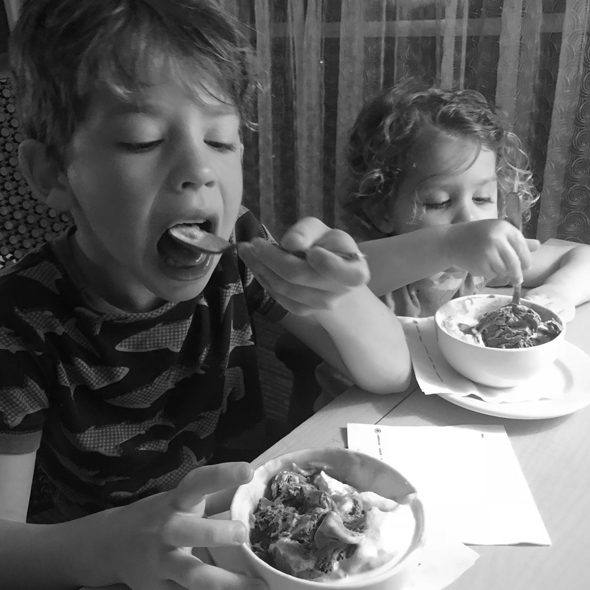 The adventure continues tomorrow. Something about donuts.

Until my next update, I remain, your Bragging Bubbe correspondent.

« Back in Los Angeles Sunday Funday »