Los Angeles, California:  Y'all will not be surprised to learn we did not stay in our Portland house for long. Just like last year, we came home on the weekend, unpacked, had dinner with Renee and Nancy on Thursday and flew to LA on Friday. Lucy has her ballet recital Saturday and we wouldn't miss it for the world. No, Lucy is not a prima ballerina. A ballet recital for three year olds is only well-costumed chaos.

Happily for us, Alaska Airlines has many non-stop flights between Portland and Burbank daily. Unhappily, they are no longer at convenient times for us. The flights are probably very convenient for all the Hollywood stars needing constant transit between Los Angeles and Portland (many movies and television shows are filmed in Portland). Dave and I ended up with a 9a flight to Burbank... which meant leaving our house (as far away from PDX as one can possibly get while still claiming to reside in the Metro area) before 7a... which meant rising before 6a.

After touching-down, we spent time with Lisa before going to fetch Lucy from pre-school. We all went to ice cream and then it was time to get Leo from his school and then shuttle him off to piano class. Later, everyone gathered and we went out to Toluca Lake for sushi at Sushi Yuzu. We all love this little place. Amazing sushi. Teeny restaurant, and always packed to the rafters, making the restaurant so noisy, no one even noticed we had two little kids with us. 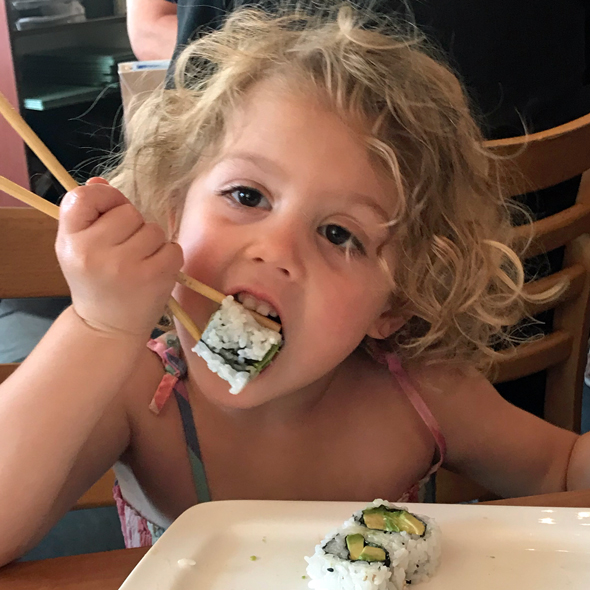 Lucy can eat her weight in yellowtail sashimi, and avocado roll 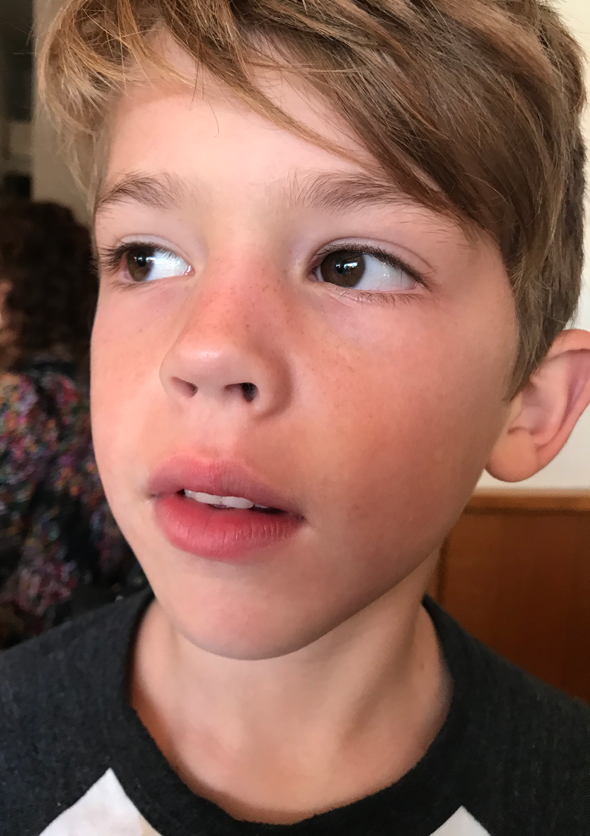 The kids finished their meals ahead of their parents and grandparents. It was so noisy inside the restaurant you couldn't hear yourself think. Or talk. Or anything. I decided to take the kids outside to the outdoor foyer, so they could get some air, have a miniscule space to stretch-out and get away from all the pandemonium inside the restaurant.

To keep the kids busy, entertained, and quiet, I decided to hold a contest. Who could sit and not talk the longest? $1 cash money up for grabs. 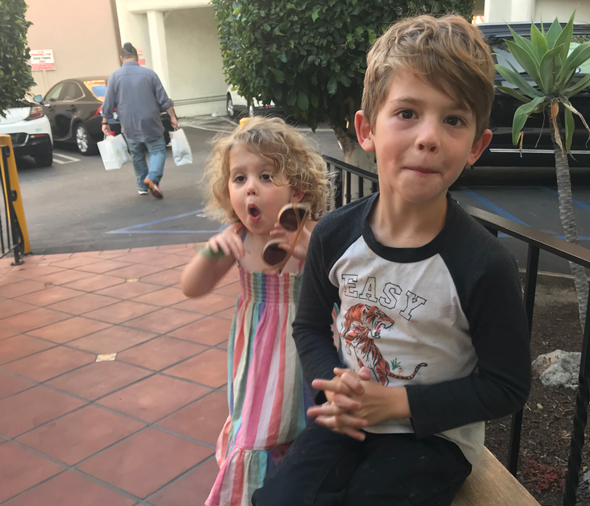 I'm not making a sound, Bubbe 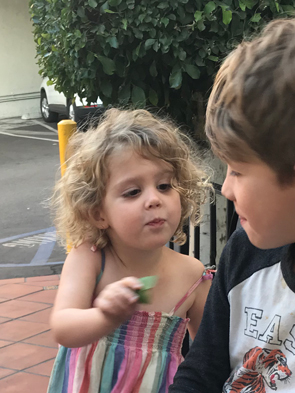 Yoo Hoo, if it wasn't fun watching the kids roll their eyes, puff-out their cheeks, and try to not talk. Lucy had a leaf (from the tree in the above photos), and tried to focus on the leaf... then poked Leo with the leaf. He wasn't going to speak, and finally, Lucy said something. Leo was up a dollar. Miss Poor Loser demanded a re-match, which her Brother let her win. We had a one-one tie. I had one more dollar note in my wallet.

A "freeze" contest was declared. The kids sat on the bench, and when I gave the word, they froze in place. This went on for quite a while (especially for a three year old), and really entertained the patrons coming and going from the restaurant. Lucy finally moved, and Leo won his second dollar of the evening. A good grandmotherly investment for twenty minutes of quiet fun.

Seriously, they probably would have been just as happy with shiny quarters, but I simply didn't have the coins in my wallet... but I'm pretty Lucy later convinced her grandfather to give her another dollar, so the contest ended in a 2-2 tie.

Not only do we get to enjoy the ballet recital tomorrow, Leo has a T-Ball game!

Until my next update, I remain, your bankrupt correspondent.
« The Country Life + Leftovers Double Header »