Indio, California:  The clouds blew off to somewhere else overnight and we woke to this: 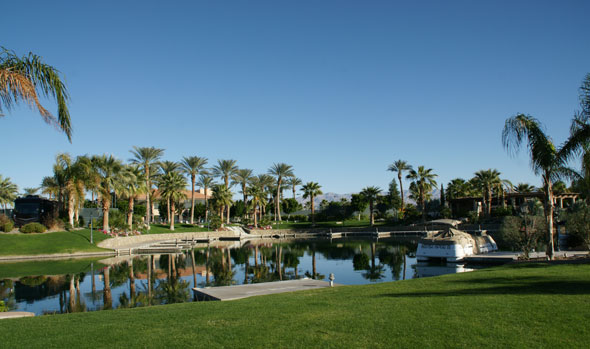 Sorry. Just a lovely day. Only about 60 degrees, but no wind and no clouds. Just a pretty day. 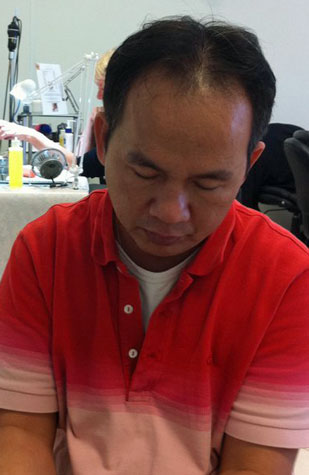 Since we are heading over to the Big City of Los Angeles for the New Year Weekend, I went to see Henry. Henry gives the best pedicure in California. He practices some sort of torturous reflexology-inspired massage that borders between heaven and torment. I adore Henry. It is difficult to tell if Henry adores anything. He is very quiet, but Henry actually cracked a smile when I walked into his shop today - a first!

This afternoon, we had a (via cell phone) photo from our housesitter: 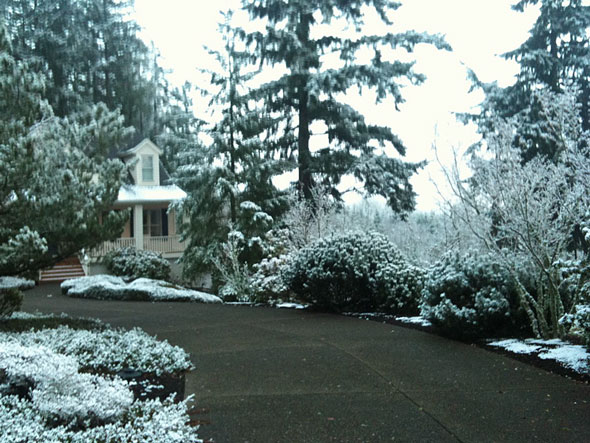 Seems the weather at home is not quite the same as we are experiencing in the Coachella Valley. I ran right outside and snapped this photo with my phone and emailed it directly back to Brandon via my cell phone: 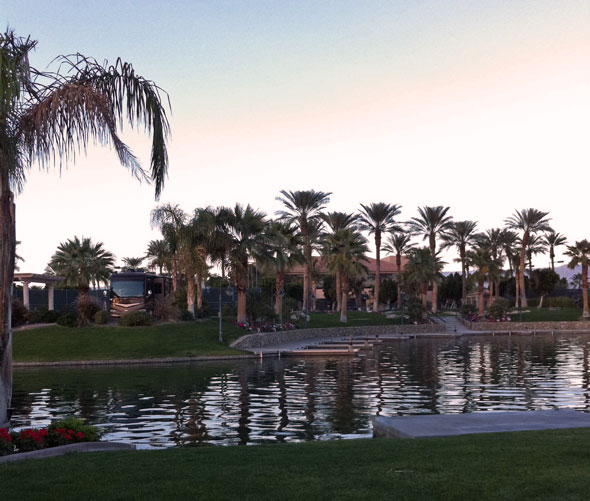 I will surely go to hell for these little misadventures in cruelty.

Yesterday I wrote about the chicken enchilada thingy I was preparing for Debbie & Mark tonight. I made the filling, but realized I did not have a pan large enough to hold all the enchiladas the filling would create... and since I am so lazy, decided to make a casserole using the tortillas - much like lasagna noodles - between layers of the chicken-spinach filling. I love our fancy Advantium oven, but the thing only operates with a round turn-table. Every pan has to fit inside the 12-inch diameter always-spinning platter. 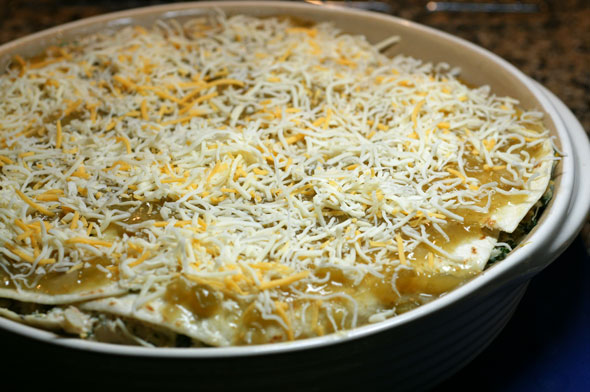 I guess one would call this "Chicken Enchilada Florentine Casserole"? Not sure. I completely made it up. It was delicious. I cheated so much on the recipe, I am not sure it can actually be called "cooking". I bought a rotisserie chicken from the supermarket, shredded the meat and added one chopped onion (sauteed in olive oil with three cloves of garlic and one diced jalapeno), frozen spinach (thawed and squeezed dry), canned diced green chilies, low fat sour cream, Mexican cheese medley (already shredded in a bag) and a little salsa verde (green salsa made with tomatillos). I tore flour tortillas to line the bottom of an oiled casserole dish - then spread half the chicken-spinach mixture over the tortillas, made another layer of torn tortillas, another layer of the filling and finally topped the casserole with a third layer of torn tortillas. 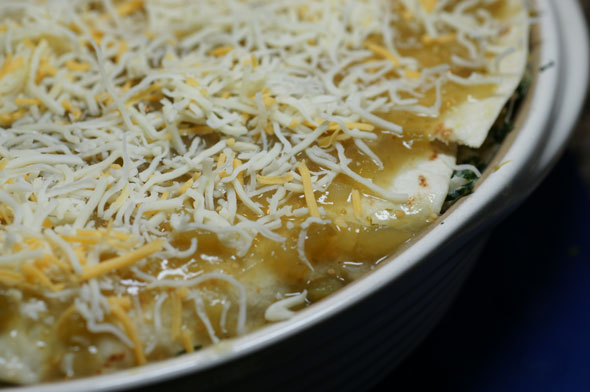 Then I topped the casserole with more salsa verde and a little more shredded Mexican cheese. The dish was baked at 350 degrees for 45 minutes and left to rest for 15 minutes. 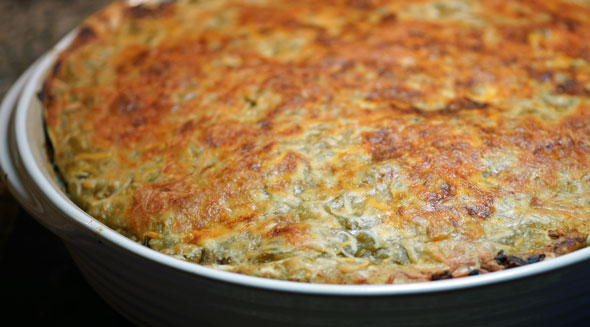 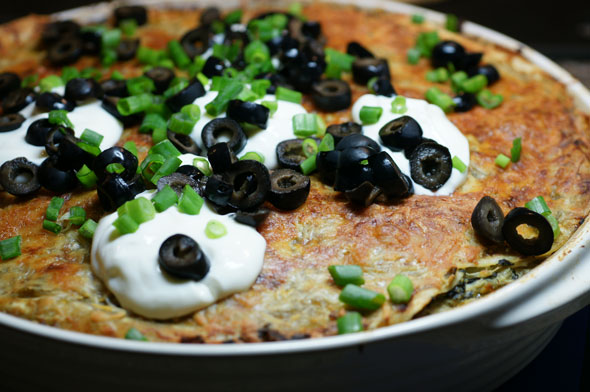 So I made it look good too - by topping the casserole with a few dollops of low-fat sour cream, sliced olives and slivered green onion. 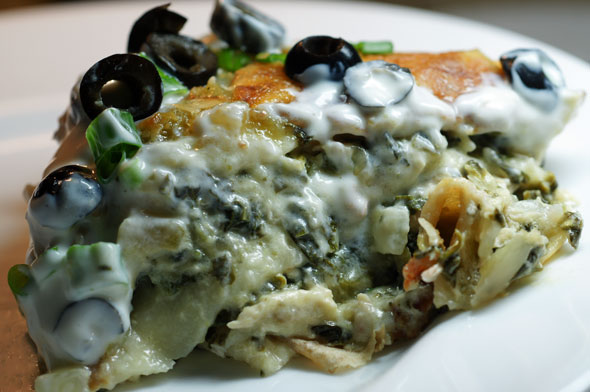 Mark had thirds. I call this a success. Should I post this recipe?

I only served a fruit salad as an accompaniment. 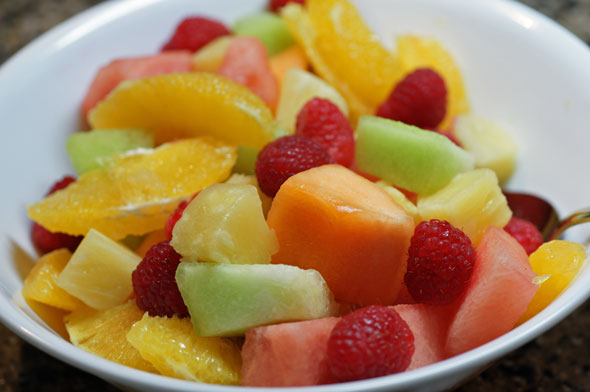 And we also had fruit for desert: 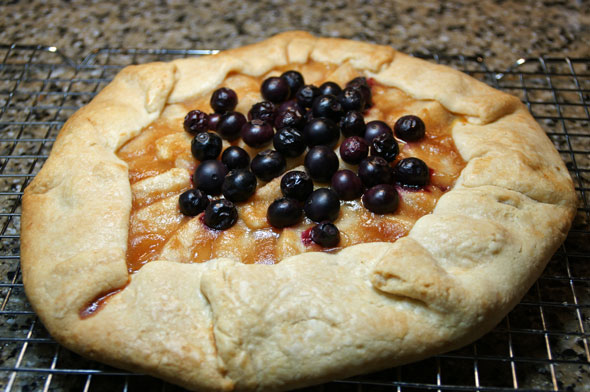 I cheated here too. I bought a frozen pie crust from Trader Joe. I rarely (well, this is the second time I have ever used a purchased crust) cheat, but Trader Joe makes a very decent crust and it has no hydrogenated oils.

And I'm cooking in my RV.

And I am basically very lazy. 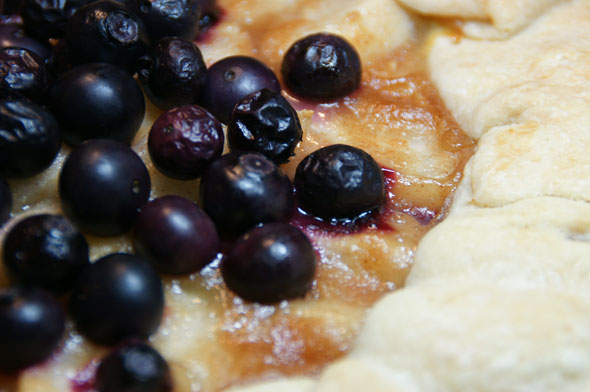 I lined the bottom of the crust with sliced Oregon pears - tossed with 3 Tablespoons of sugar, 1 teaspoon corn starch and a little cinnamon and ground ginger. I placed a few handfuls of organic blueberries in the center of the crostata and baked it for 40 minutes at 350 degrees. Great dessert and very easy!

We had a fun evening with our old friends (DT and Mark went to high school together!) and talked for hours. We will see them again soon and maybe I will actually take a photo of Debbie and Mark instead of what we fed them next time???

Until my next update, I remain, your lethargic correspondent.

RV Park:  Motorcoach Country Club. Without a doubt (to me - and don't forget, it's my website) the finest RV Resort in The World. Every available amenity. Golf, tennis courts, 3 pools, 3 spas, bathhouses, fitness center, club houses, restaurant, bar, gated security, 2-mile waterway and wifi. We are paying about $100 per night. (Not a typo!)