Track Town, USA: My running career has hit a seriously skid. Waking up before 5a and getting my column out, heading over to the track, awarding medals to athletes, attending cocktail parties with Serene Highnesses... all this just takes a lot out of this old gal. Trying to fit in a little exercise into my day is a struggle. Of course, My Driver has not missed even one day of jogging and all he is doing is organizing the Olympic trials. What is my excuse? None, except I am basically very lazy.

Maybe I just need a new training tool. Do y'all remember this:

There are no track events Tuesday and Wednesday, as the US Trails are following the London Olympic schedule to accommodate the athletes (to have them compete here the same days they will compete in London in probably the same weather). This morning, Dave had meetings until about one o'clock in the afternoon, then he went for a run and came back to the RV park to fetch me so we could explore the Fan Festival.

Dave arrived back to bus, showered, and conducted a phone interview with a newspaper. When we went to head back to the track, DT could not find his car keys. Obviously his car keys were somewhere in/near the motorhome as he used the keys to get here. He looked in the car. Looked in the bus. Looked around the RV. I actually drained the washing machine thinking the keys were in the pocket of his running clothes being laundered. Nothing. My car was at the track, so we were stuck here without a car! Thirty minutes later, I opened the passenger side of his Tahoe, to see his keys in the ignition. DT swears he looked in the ignition.

Then DT said he had lost his mind.

Under these circumstances, I just laughed. Surely, I will one day be rewarded in heaven with vats of pinot grigio, high speed wifi and foot massages.

As I wrote several days ago, NIKE has constructed three tall white tent-like structures in the fan festival that DT refers to as the Nina, the Pinta and the Santa Maria. Each structure holds something incredibly interesting to track fans... especially the building that hold the NIKE shop. Wow. I just didn't even want to go in there. Too dangerous.

But I did. I was looking at an item to purchase, but could not read the price tag. The item was up very high on a wall display and I am very short. I noticed a very tall girl next to me and asked if she could please read the price tag for me. I then recognized the tall young lady as Stephanie Brown Trafton - winner of the discus competition and defending Olympic Gold medalist. I couldda died of embarrassment! Stephanie was so sweet. We talked for quite a while and DT helped her find a pair of shoes she was coveting, so Stephanie thinks he is the greatest.

Stephanie is right... he is... except Stephanie didn't spend 30 minutes looking for DT's car keys this afternoon.

Another NIKE flagship holds a facility where you can have your feet custom-fitted for shoes. Shoes made exactly around YOUR feet. How cool is that? Another building... maybe the Pinta... has a display that shows how fast a sprinter races down the track. 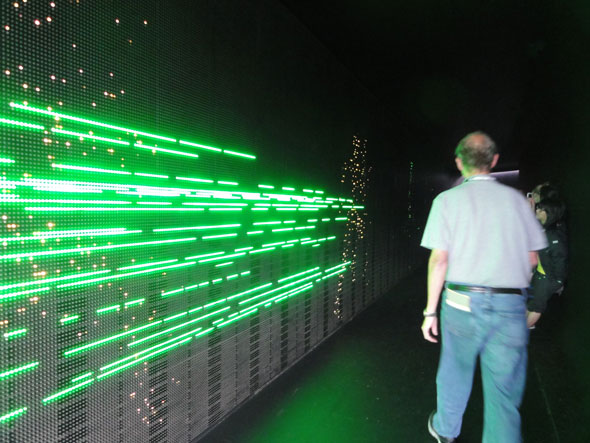 I was about ready to have a seizure watching all the colored lines race down the wall. How is it even possible to run that fast? Amazing stuff. 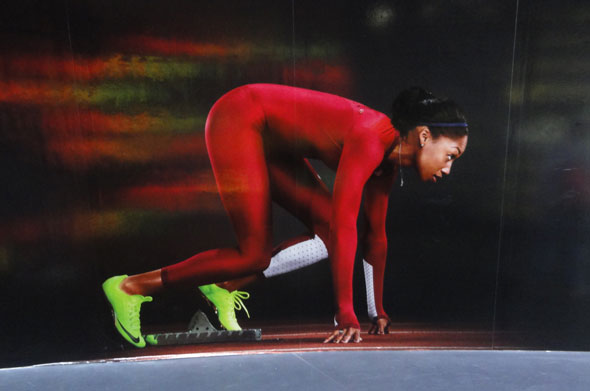 Also, in this exhibit, NIKE was previewing their US Olympic Team shoes and uniforms. Apparently this new fabric can take a zillionth of a second off a performance. Sometimes that is all it takes.

Another exhibit (possibly the Santa Maria?) has a fun game where you can compete against another person to produce energy (?) from a treadmill-type device. I am not smart enough to actually figure-out what was going on, but two people get on the treadmill and work-out for 30 seconds. NIKE dudes snap your photo, and your times/energy are recorded and the top performers are posted during the trials on the big screen in front of the treadmills. 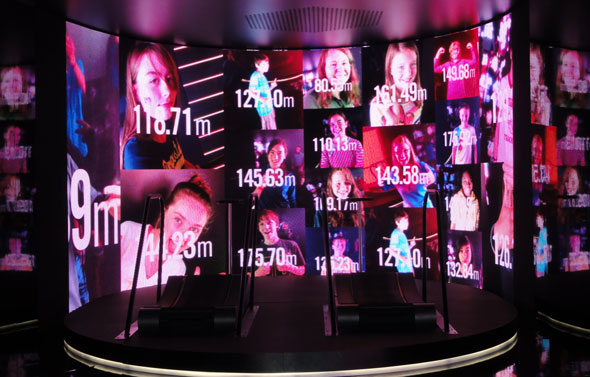 Above are the two treadmill-type machines, with hundreds of faces of people who have competed this week, flashing on the big screen behind the treadmills. 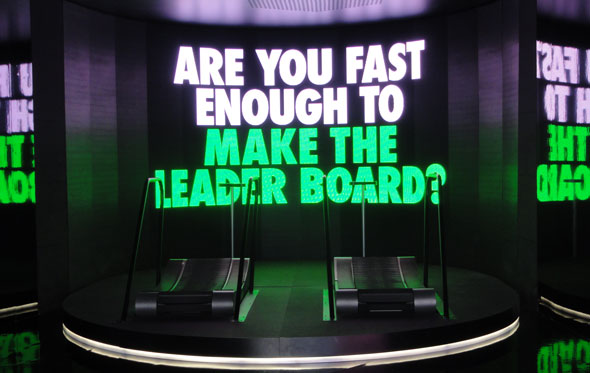 Oooohhh... and a little enticement... 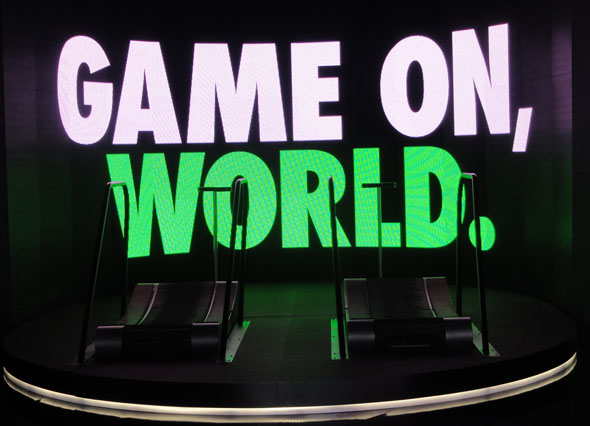 How much fun was that? Loved that the kid beat his Dad.

Back at the RV park, we had a cocktail with our friends, Susan and David Acosta (AJ's parents). They drove their RV up from SoCal to watch their boy compete in the 1500m this week and are camping in this RV resort. So happy to see them again and so excited for the 1500m.

Today was so relaxing. Even the sun came out for a few minutes and the temperature is supposed to climb tomorrow. Good thing too, because the Cutest Baby Ever is set to make his appearance at the 2012 Olympic Track & Field Trials over the next few days.

Until my next update, I remain, your refreshed correspondent.