Beijing, China:  Another early morning, up and over to the track to watch Ashton Eaton race the 100m hurdles in the second day of the decathlon.

But first, a healthy breakfast: 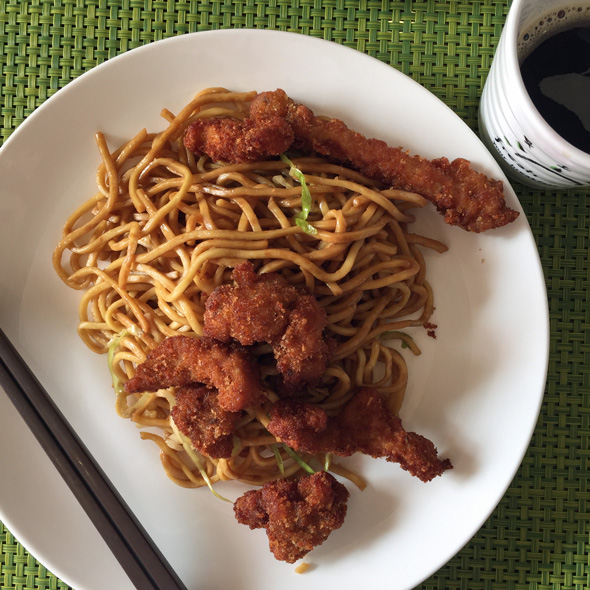 This time, Singapore noodles with spicy chicken. Why not?

We watched Eaton run 13.69 in the hurdles, placing second over-all. Then he threw the discus 43.34 meters (142-ish feet); 11th over-all. After the US 4x100m men and women relay teams had safely moved into the finals, we headed back to our room to watch the decathlon pole vault on television and get some rest.

I took the long break between sessions to have a foot massage, walking out to find a place fellow travelers had visited a few days prior. Though I never did find the exact same spa they patronized, a suitable substitution was located, as they seem to be everywhere. After an hour of foot and leg massage, I was a new woman. 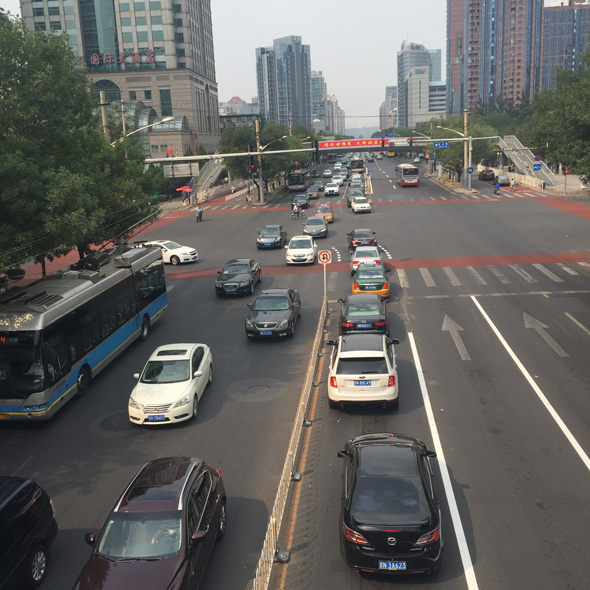 The streets of Beijing from a pedestrian skybridge

Beijing skies had been clear until today, but we decided it was clouds and not pollution. Due to the 70th Anniversary of the Japanese leaving China (and the World Athletic Championships), factories are closed, traffic is light and the pollution levels are lower than usual.

Before going back to Olympic Stadium, we had lunch at the hotel - the first time to try the restaurant when it was serving something other than the breakfast buffet. 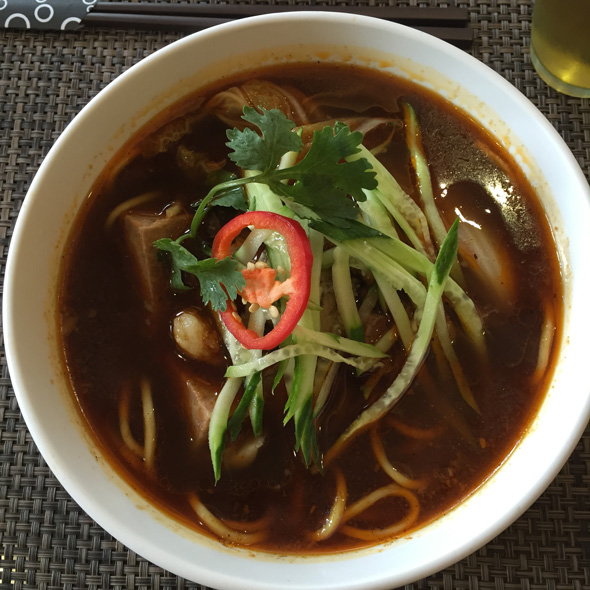 Never mind that you are outside a massive hotel dining room, when nature calls... 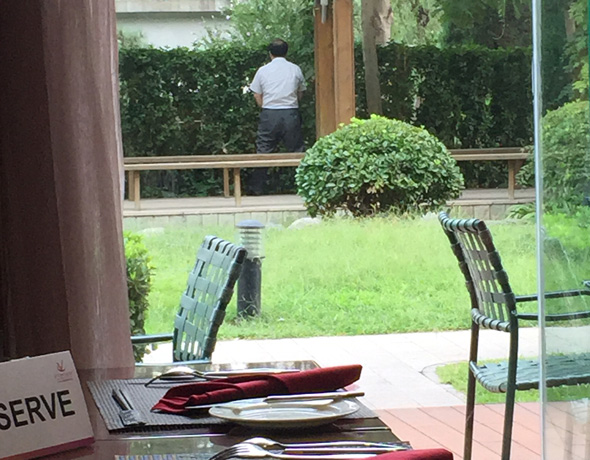 Our view from the hotel dining room 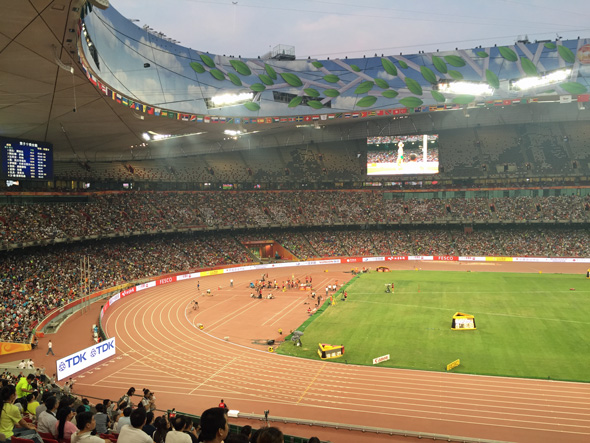 Our view of the decathlon javelin competition 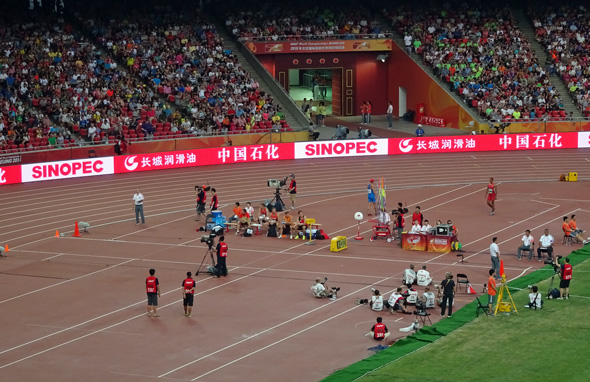 Our view of the decathlon javelin competition

It was a huge night at the track. After clearing 17 feet in the pole vault, Eaton threw the javelin over 208 feet - a season's best and was still sitting in first place with 8216 points. The WGA would have to run the final event, the 1500m, in 4:18.25 to break his own world record.

You know he did - 4:17.52. The stadium went wild. Ashton collapsed on the track, exhausted after two grueling days and thrilled with his new title. (He broke his own world record!) Soon he was joined by his Mother and his wife, everyone crying with happiness. 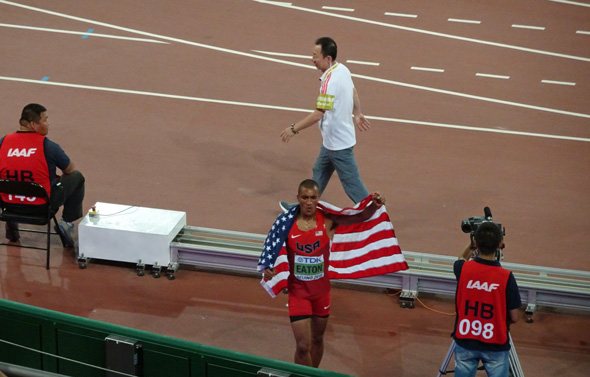 I was pretty excited as well - 10 huge points for the Peking Ducks. 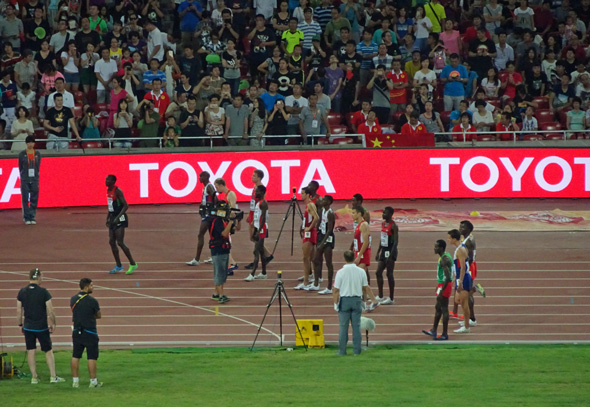 More points were scored for the Peking Ducks when Galen Rupp took 5th in the 5000m final. To say the pace was slow would be an understatement. After the race, Dave joked with Galen, reminding Galen his high school championship race had a faster pace. Galen told Dave he ran the last 800m in 1:51. Impressive. 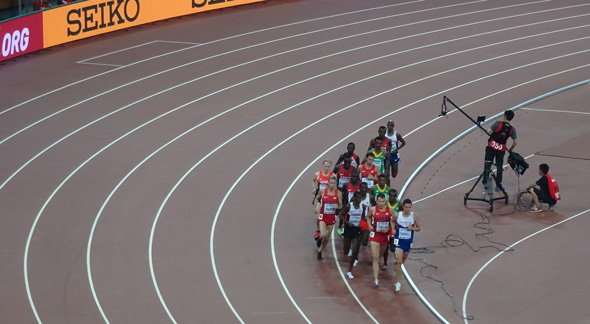 The men ran tightly packed until finally, Mo Farah (last place in above photo) finally decided enough was enough and took off. Farah won the 5000m for Great Britain in 13:50.38. 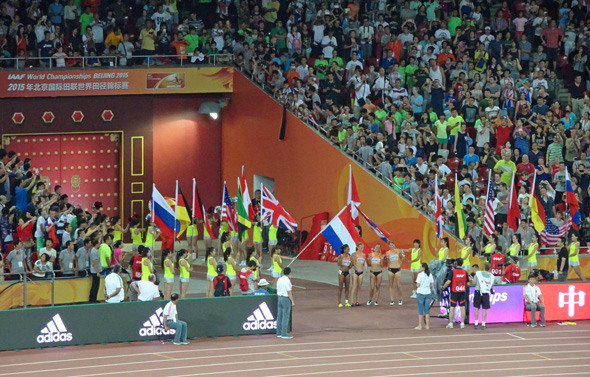 You know how players are introduced before a NBA basketball game? Smoke. Fireworks. Lots of show-boating. This is how the 4x100m relay teams were introduced this evening. Teams appeared from massive red doors with cheerleaders and flags from each country racing. The women were quite calm, but when the men were later introduced, there was some serious show-boating. Great fun.

As usual, the US men's 4x100m relay team was disqualified.

A magical night at the track... and then a magical night in the hotel lobby when David Oliver and I posed for a photo. Isn't it cool that we are wearing matching outfits? 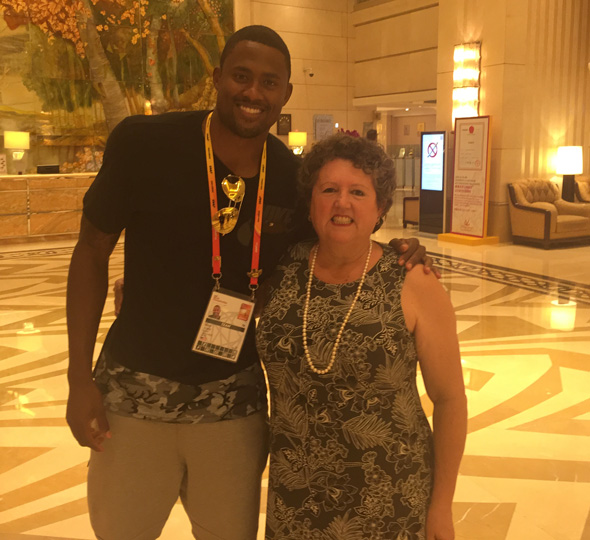 Until my next update, I remain, your world record correspondent.