Beijing, China:  Since this was our last day in China, we decided to have some Chinese food... except we were far too exhausted after a eight days of track & field, heat, humidity and late nights to venture far... deal with a taxi and traffic. Plus, after beautiful sunny skies all week, it was raining in Beijing. We ate at the hotel and were pleasantly surprised to find the Chinese restaurant was quite good. 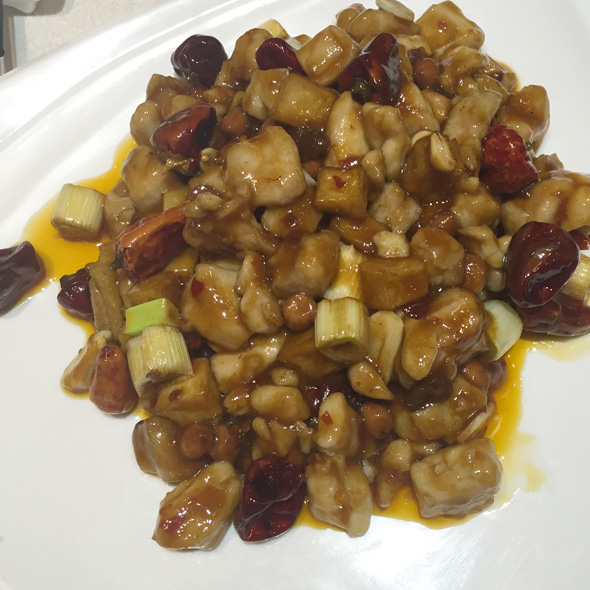 One of our very favorite Chinese dishes - Kung Pao Chicken - arrived to our table with cubes of pork belly. What, and why? 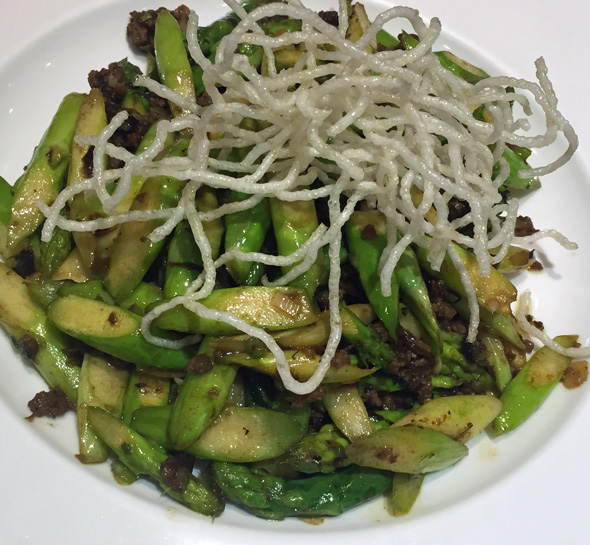 We also tried asparagus with minced beef. This was simply delicious. Good thing too, as the chicken remained untouched. The white curly garnish are fried rice noodles - crunchy good. 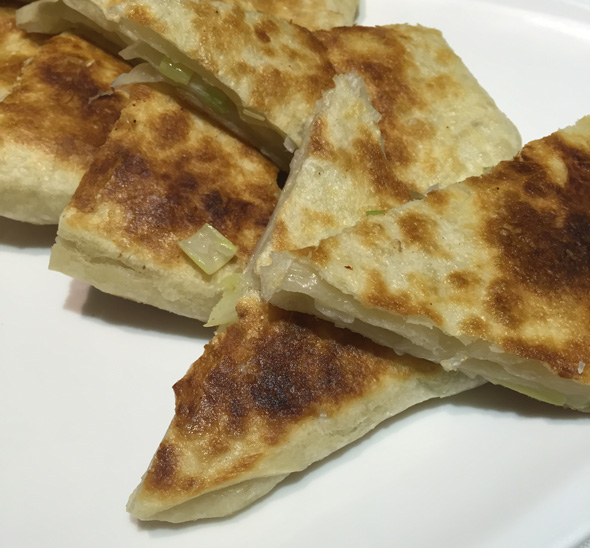 The Lovely Lisa is very fond of scallion pancakes and makes this dish quite often in her kitchen. We gave them a try in Beijing and were not disappointed. Layers and layers of thin bread, filled with fried green onions. What's not to love?

The restaurant began to fill with athletes and their families. With just a few final races this evening (no morning session today), most competitors have finished and are getting ready to head home. Maybe they all had the same idea as we did: eat some Chinese food in Beijing because that Panda Express at home pretty-much is not Chinese food.

We checked on our hotel bill and made reservations on a shuttle bus to the airport tomorrow. Time to pack our bags.

The first event on the agenda this evening was the decathlon medal ceremony. We were so happy to see Ashton Eaton receive his hardware and very excited to see his new world record be rewarded with a big fat $100,000 check. 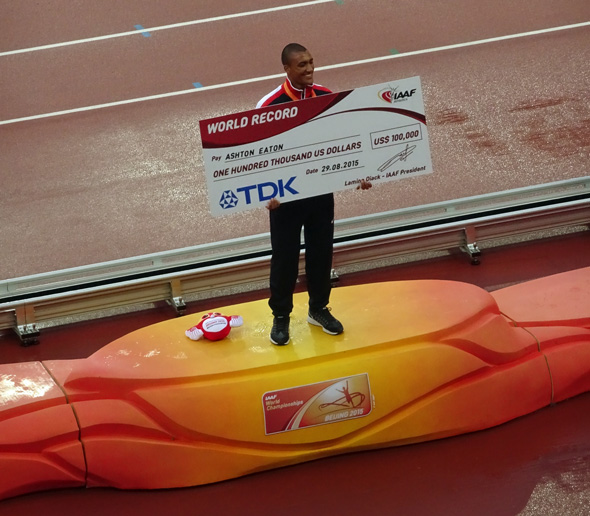 The IAAF awards prizes at the world championships. First place in a final receives $60,000. Second receives $40,000 and then it goes down the line... with 8th place in each final earning $4000. If a racer breaks a world record, there is a $100,000 bonus. Aside from this prize money, most athletes have clauses in contracts with sponsors (usually their shoe company) that they will receive cash bonuses for medaling - and a big bump for breaking a world record. This was the only world record broken at the 2015 Championships. 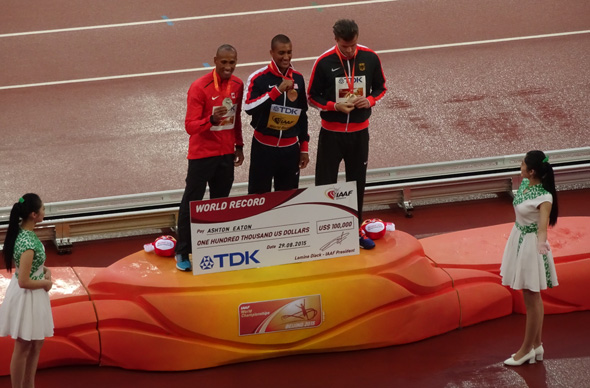 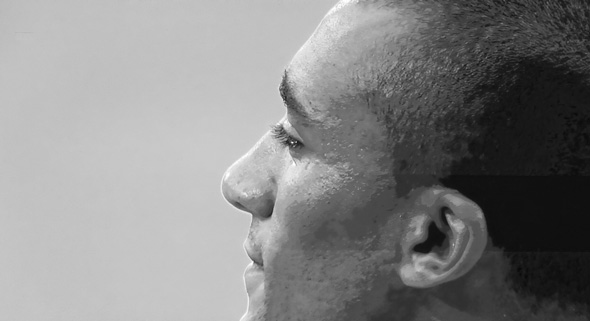 Ashton Eaton during the US national anthem

After the decathlon medal ceremony, three Ducks (and Allyson Felix) received their silver medals from the 4x100m relay last evening. 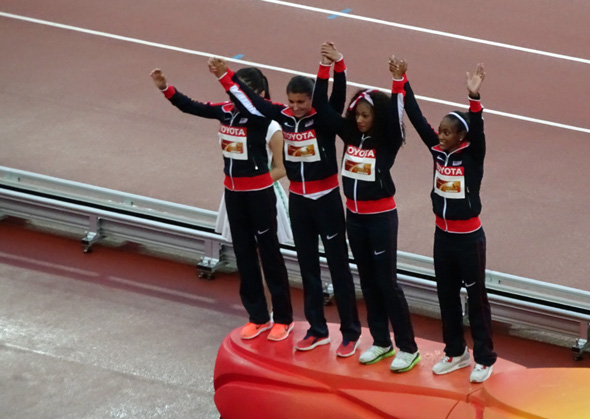 I could not believe how many Ducks were on that podium this evening! So proud of them all.

Matt Centrowitz, Jr., finished 8th in the men's 1500m final. It was a tough race from the start. Americans Leo Manzano and Robby Andrews finished 11th and 12th.

After the meet was over, there was a short closing ceremony where the baton was passed on to London which will host the World Championships in August of 2017. Children danced around the infield and they played the same song from the opening ceremonies: We are enjoying the dreamlike happiness... I am a star continuing the glory... the glowing heart is flying with the dreams... the world is as beautiful as a dream. All of this was accompanied by piped-in fake applause. 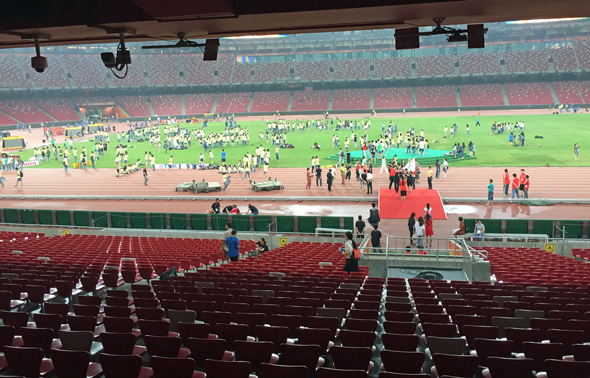 After the crowd went home, the volunteers gathered on the infield to dance and enjoy their last night in the stadium. 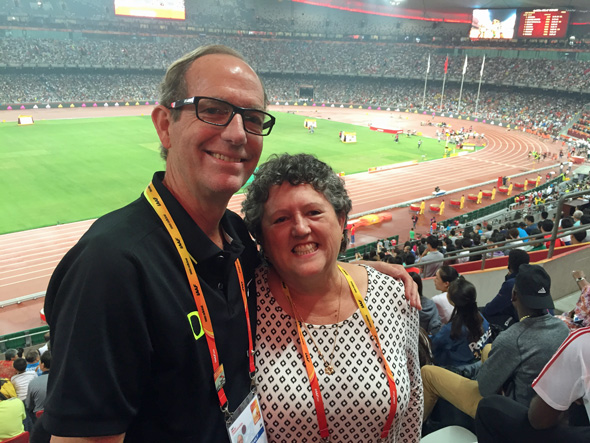 The only couple more tired (than us) in Beijing tonight are Brianne and Ashton. 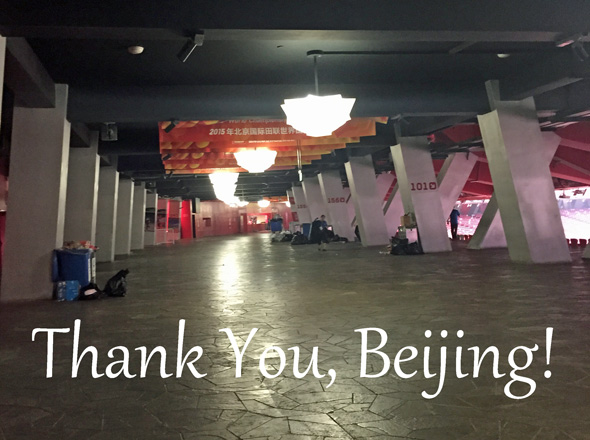 Until my next update, I remain, your Beijing correspondent.

Peking Ducks: With one point for Matthew's 8th place finish in the 5000m final and 8 points from the 4x400m (Phyllis Francis), the Ducks earned 9 more points today, giving them a whopping 45 points in total. This means if the University of Oregon were a country, they would have finished in 11th place over-all at the World Championships (and the tables goes down to 65th place). This is ridiculously impressive, people! Even more impressive is the fact, we had only 10 athletes in the meet. (We are a very small country!)

Pedometer: Finally, a day of rest. We did not leave the hotel until we walked to the track this evening. 6,328 steps; 2.8 lovely miles.