Eugene, Oregon:  Because it is nearly the wee hours as I begin this column, I am going to keep it short and sweet and the events of the day will not be reported here in chronological order. Today was a very important day in the NCAA Track & Field Championships. Competition is really getting serious. We are finished with heats and prelims.

Time for the Big Boys and Girls to come out and play.

Another early day at the track to watch the final day of the decathlon. Sadly, Senior Duck Marshall Ackley injured his hamstring. Did he drop out of the decathlon? No. He did not. I have not spoken to Mr. Ackley and do not know (for sure) his feelings, but I am going to venture he decided "dang it, I'm a senior and this is my last competition and I am going to finish even if I have to limp in to the finish". 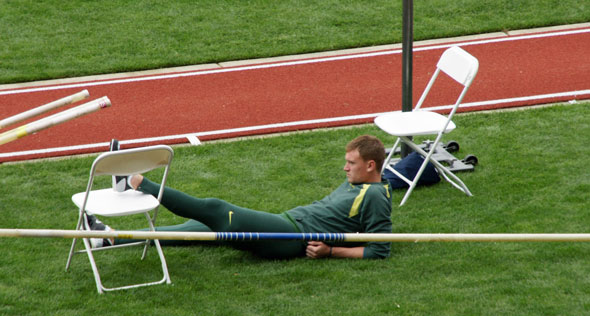 While the other competitors were pole vaulting, Native Oregonian Marshal Ackley was resting with his leg elevated. Difficult to see in the photo, but he has an ice pack the size of New Jersey taped to his hammy. 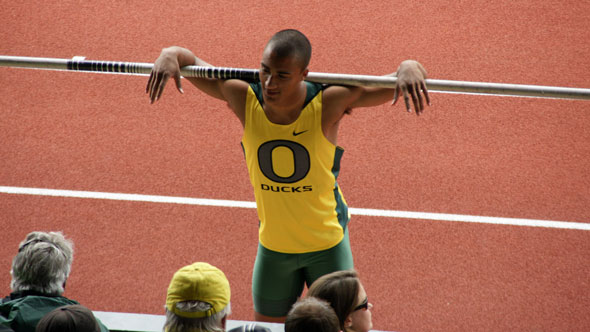 Ashton Eaton confers with his coach during the pole vault competition

Oregon's other Native Son, Ashton Eaton, was having a very solid day. He won the 110m hurdles, placed 4th in the discus and pole vaulted over fifteen feet. Here is a little video I made of Ashton clearing 4.50m and 4.70m:

In his spare time, Ashton Eaton threw the javelin nearly 172 feet and then... after two days of The One True Sport... finished first in the 1500m in a blistering 4:21.

The kid may as well run for Governor.

The 1500m is the final race of the ten-event competition. The racers are tired. Spent. As Ashton and the other decathletes finished the 1500m, Marshall Ackley still had one more lap to complete. Every person in the stadium stood and clapped - in unison - and pulled Ackley around the last 400m. His fellow competitors waited at the finish line and embraced Marshall as he crossed the finish line. It was a wonderful moment and another tribute to the Love of the Sport.

Though I feel Andy Wheating will one-day be known as a 1500m man, today he was the 2010 NCAA 800m Champion. He won the two-lapper in 1:45.69 over Virginia freshman Robbie Andrews. Keep your eye on Mr. Andrews! This kid is something.

At the end of the third day, Texas A&M is leading the team scoring with 36 points, followed by Florida 28 and USC in third with 22.5 points. Oregon and Arizona State are tied for fourth with 20 points each.

Tomorrow is going to be very interesting. 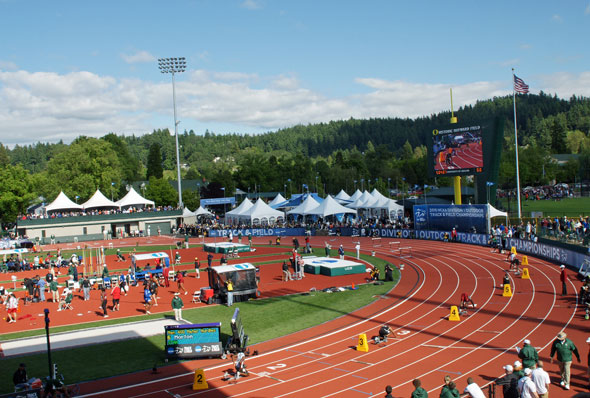 The weather was much better today. I was never warm enough to remove my jacket, but we had no rain all day!

The Lady Ducks had a good day. Freshman Anne Kesselring finished sixth in the 800m, Senior Keshia Baker ran 52.34 to finish fourth in the 400m and Alex Kosinski finished a fabulous third in the 5000m! With one more critical day of competition, Oregon women are two slim points ahead of Iowa State. Oregon 30, Iowa State 28, Southern Illinois and Texas are tied for third with 26.

Tomorrow will be awesome!

After the races today, the "Lame Ducks" had their annual reunion. The Lame Ducks are Oregon Track & Field alumni. Any man or woman lettering in the sport at Oregon is eligible for membership. Over 300 Lame Ducks gathered tonight - aged from "just graduated last year" to octogenarian. They all have two things in common - pride in The University of Oregon and Love of the Sport.

It's a winning combination. 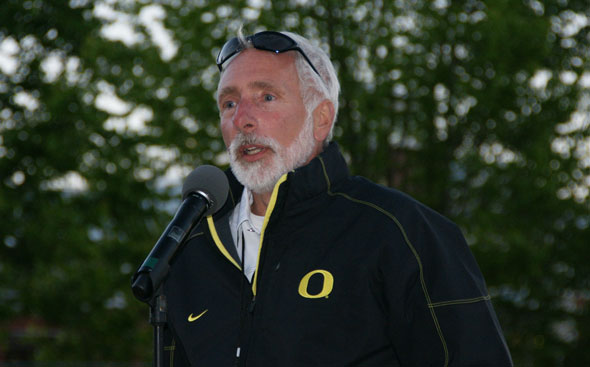 There were a few speeches, a short video, food and drink. Oregon coach, Vin Lananna, thanked the crowd (and made a special point to thank DT for his continued support of the Ducks). Another great evening with a truly great group of people.

The Championships conclude tomorrow - live on CBS Saturday morning. Think good thoughts for fast times, no injuries, no wind, sticky batons and clear skies. Until my next update, I remain, GO DUCKS correspondent.