Day 2: Love of the Sport

Eugene, Oregon:  The NCAA track meet was not moved overnight to Honolulu or Palm Springs or Miami, so we put on our rain gear and were in our seats at Historic Hayward Field just after 9 o'clock this morning. Dark skies. Wind. Rain. It sprinkled on and off all day and the temperatures never did reach the promised "low 60's". Not a good day for a track meet.

It was a great day for Junior heptathlete, Brianne Theisen. Trailing by four points yesterday, Bri won the long jump, placed third in the javelin and ran a blistering 800m to earn 6094 points and win the national championship! 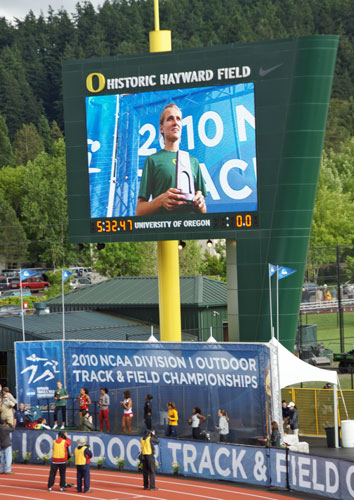 The athletes receive their awards under the "big screen". Trophies are given to the top eight athletes. If American citizens, these athletes also achieve "All American" bragging rights for life.

On the track, Duck women advanced Alex Kosinski and Jordan Hasay to the 1500m final Saturday and the Ducks women also advanced a 4x400m relay team!

Of course, much of our day was devoted to watching future WGA Ashton Eaton rack up the points in the decathlon. He cruised to a very sweet victory in the 100m, won the long jump, was second in the high jump, placed 8th in the shot put and won the 400m run. Ashton has earned 4500 points in the first half of the competition, which breaks his own school and NCAA record. Eaton broke so many records today, I just became confused and stopped trying to absorb it all and will just enjoy the process. 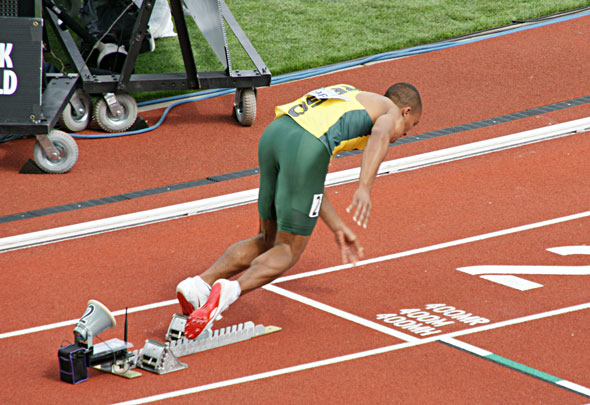 I mean, the guy can fly. 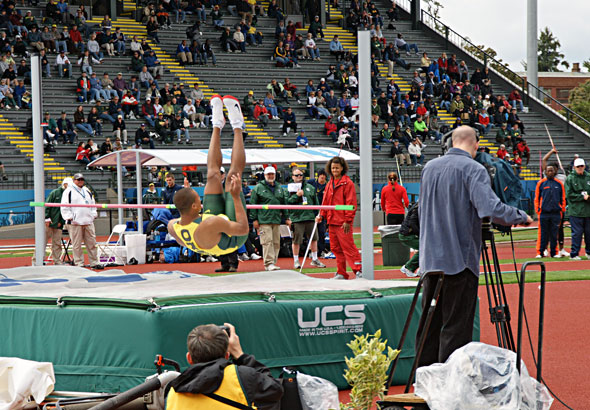 Here is something you won't see very often - Ashton Eaton missing a high jump attempt. I just thought it was a fun photo and wanted to share it with you, Dear Patient Reader. 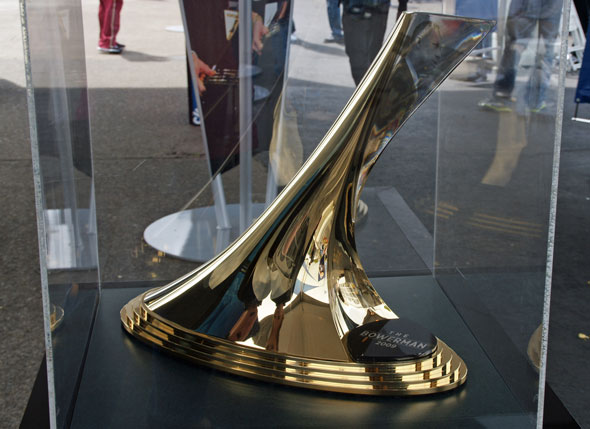 You have heard of the Heisman Trophy - awarded to the best college football player each year? Well, Track & Field has their own version - The Bowerman Trophy. 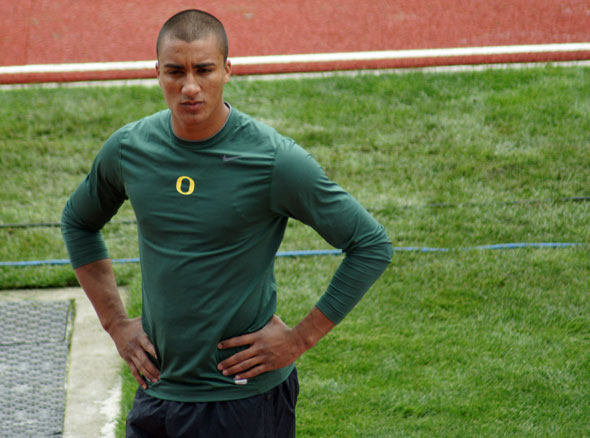 All three Duck men - Andrew Wheating, Matt Centrowitz and AJ Acosta - advanced in the 1500m and are expected to place well in the final Saturday morning - live on CBS everyone. Set your DVRs! 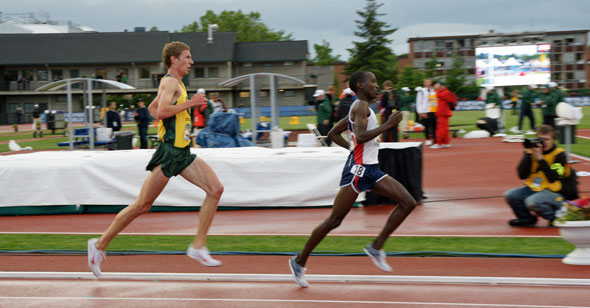 Oregon's Luke Puskedra ran a gutsy race, but did not score points for the Ducks in the 10000m final. The fabulous Sam Chelanga of Liberty University won the contest in 28:37.40.

DT had been asked by the University to present the awards to men's javelin winners! He was so honored and excited to congratulate the athletes. 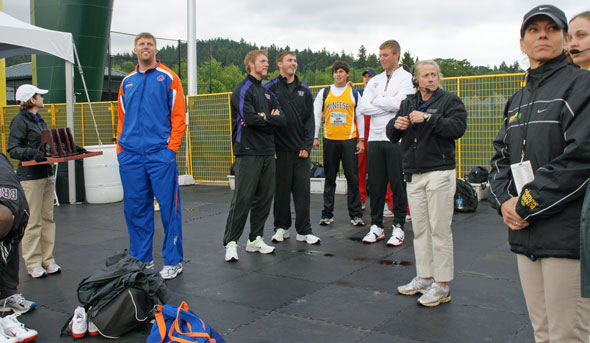 Immediately after conclusion of the javelin competition, the top eight athletes were escorted to a holding area under the huge stadium video board. 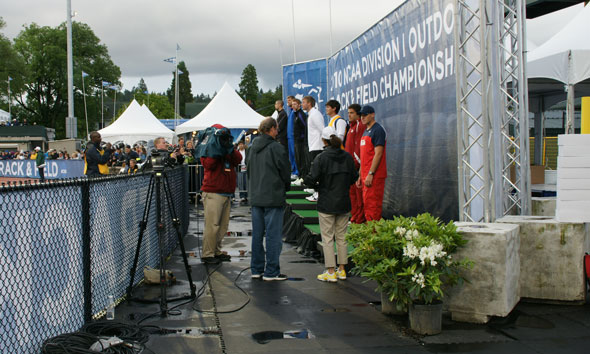 Then the throwers were placed on ascending podiums to receive their awards. Next, DT is introduced. 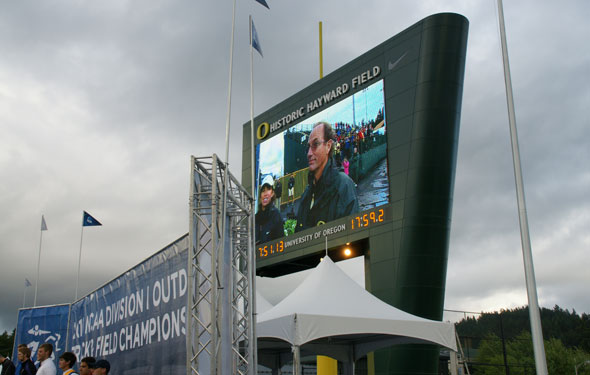 Look at that handsome fellow up on the big screen! DT was introduced as an All-American Duck distance runner and valuable member of the Eugene08 Olympic Trials organizing committee. Of course, behind every great man is a great woman... which leads me to point out the lady in pink standing behind DT. Me... obviously taking this very photo. 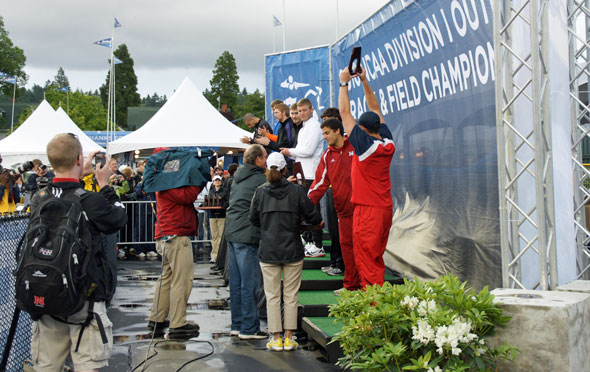 And so, beginning with the eighth place finisher, DT goes up the line giving each athlete a trophy, congratulating and shaking hands. 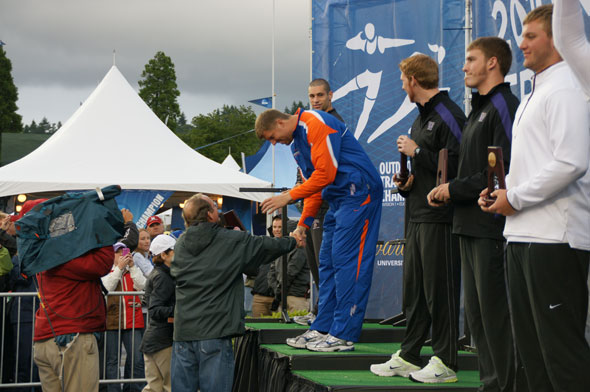 It was a wonderful sight to witness - so much happiness and well-deserved pride for these fabulous young men. 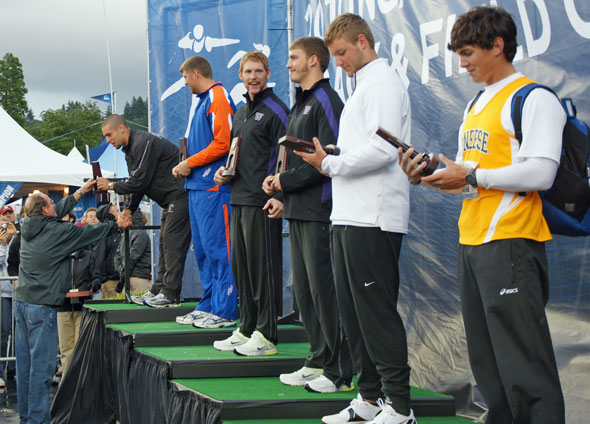 DT is down to the end of the line, handing an award to NCAA Champion Craig Kinsley. The junior from Brown University threw the javelin just over 250 feet to win the competition. I just love the faces of Sam Humphreys of Texas A&M (5th place, in white) and Sam Vidrine of McNeese State (6th, in yellow) as they gaze at their trophies.

Love of the Sport.

Until my next update, I remain, your sappy correspondent.
« Day 1: It rained Day 3: Think Good Thoughts »