Cabo San Lucas, Mexico: 42 hours after leaving Los Angeles, the Royal Princess dropped anchor in the harbor outside Cabo San Lucas. As the ship approached the tip of the peninsula, the weather didn't look very promising, but improved throughout the day. We saw many humpback whales spouting and breaching as we approached Cabo San Lucas. 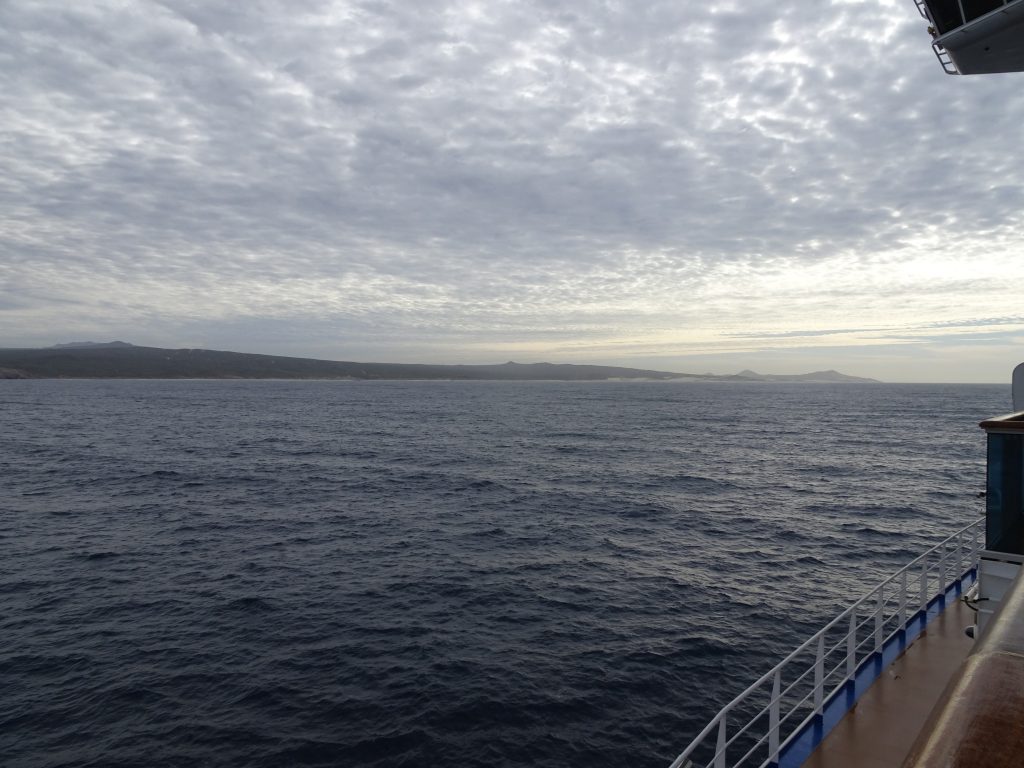 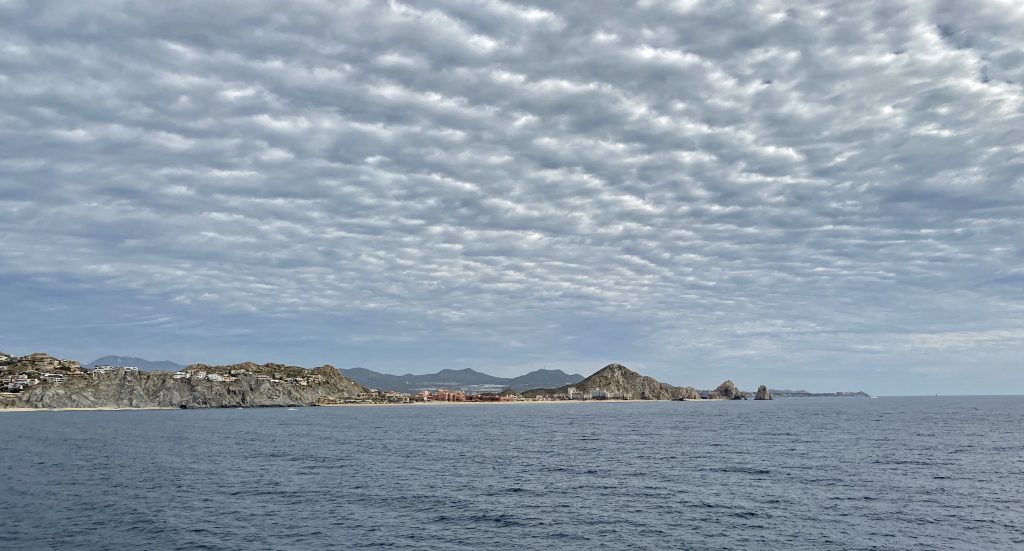 Dave asked me to take a few photos of a golf course visible from the cruise ship, and when I looked at the photo later, I saw there was a whale in the shot! 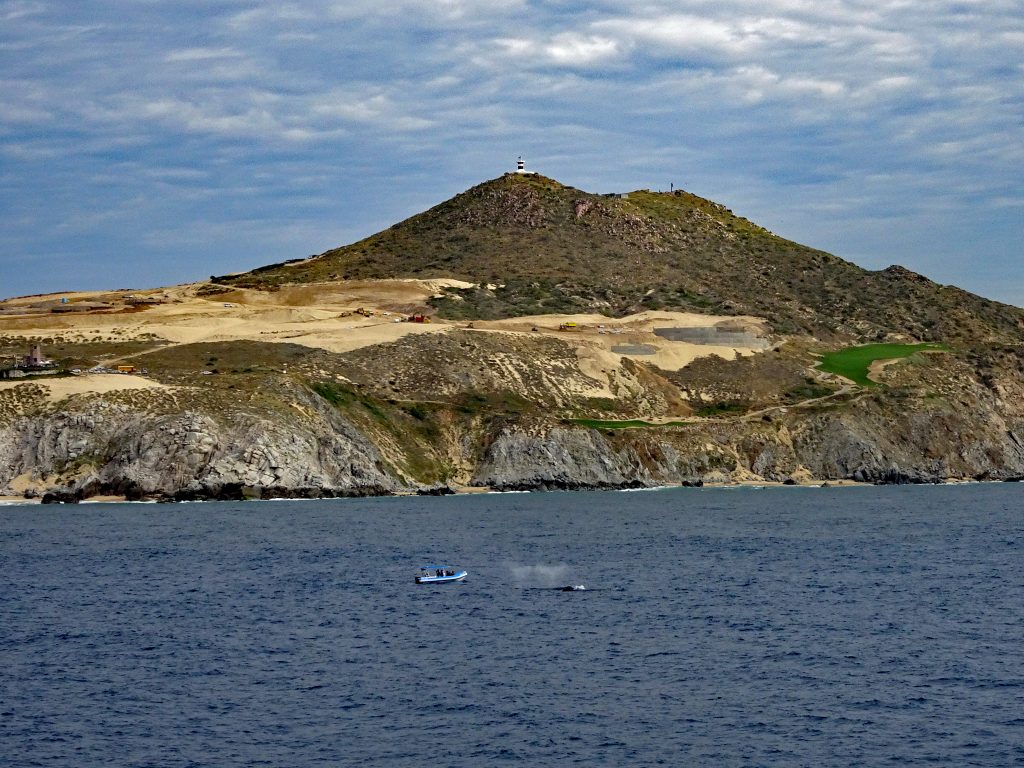 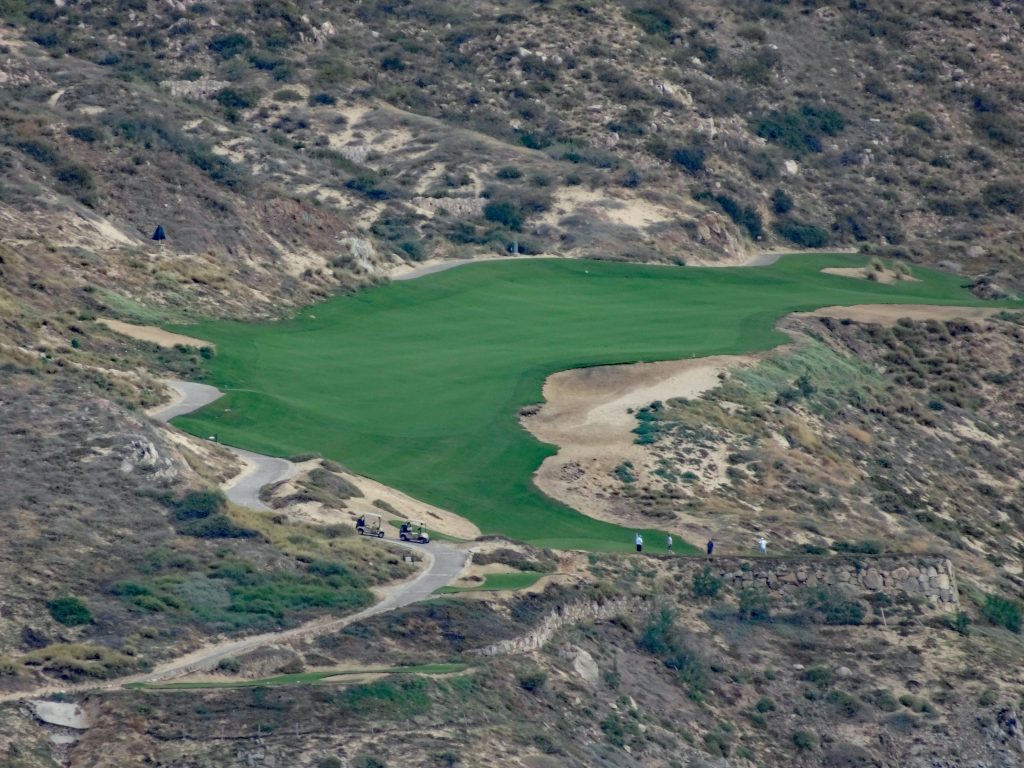 Should have brought our golf clubs!

Then we entered the harbor and had great view of the famed arch in the rocks. Here are a few shots, taken from our stateroom balcony: 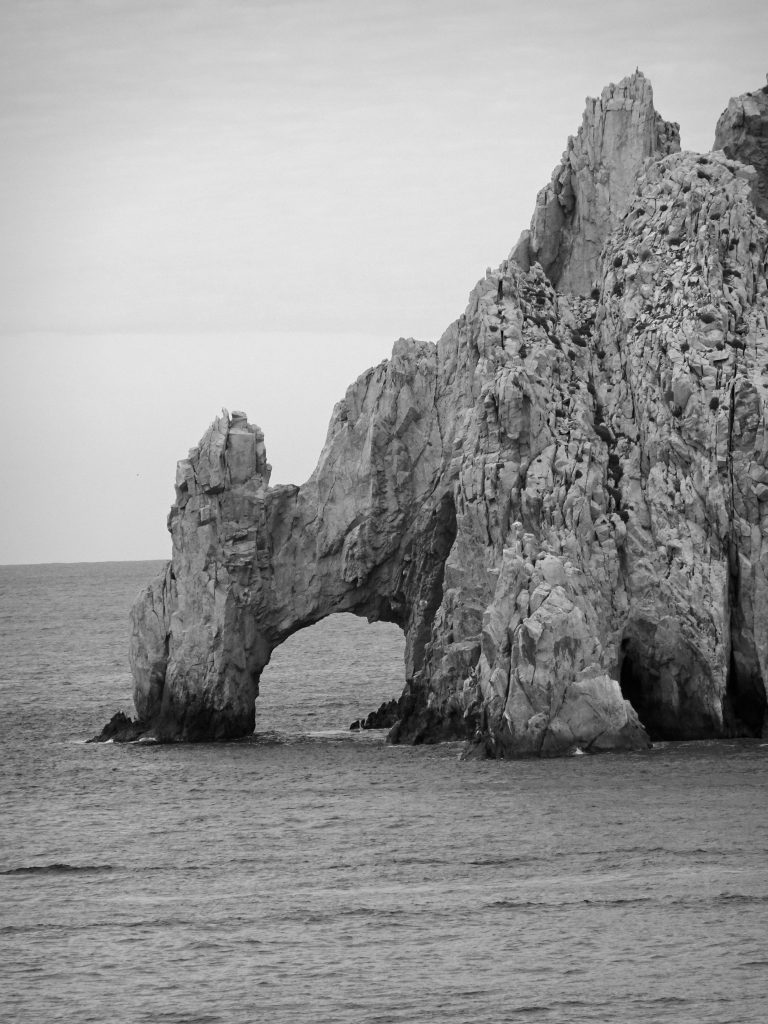 The Carnival Panorama and the Holland America Oosterdam also were in port today. So many people!

There is no dock for cruise ships in Cabo San Lucas, so all ship passengers are taken ashore via tenders (aka life boats). With thousands of passengers going to town, it takes HOURS, so we took our own sweet time, knowing the ship was going to be in port until sunset. We decided to have an early lunch on board before getting in a tender. On our way to Alfredo's Pizzeria, we discovered Catherine, the Duchess of Cambridge, is the Godmother of this ship. She christened the Royal Princess (how perfect is that?) and her photo is displayed in the lobby, along with a diorama with photos - even the actual dress she wore during the naming ceremony is on display. 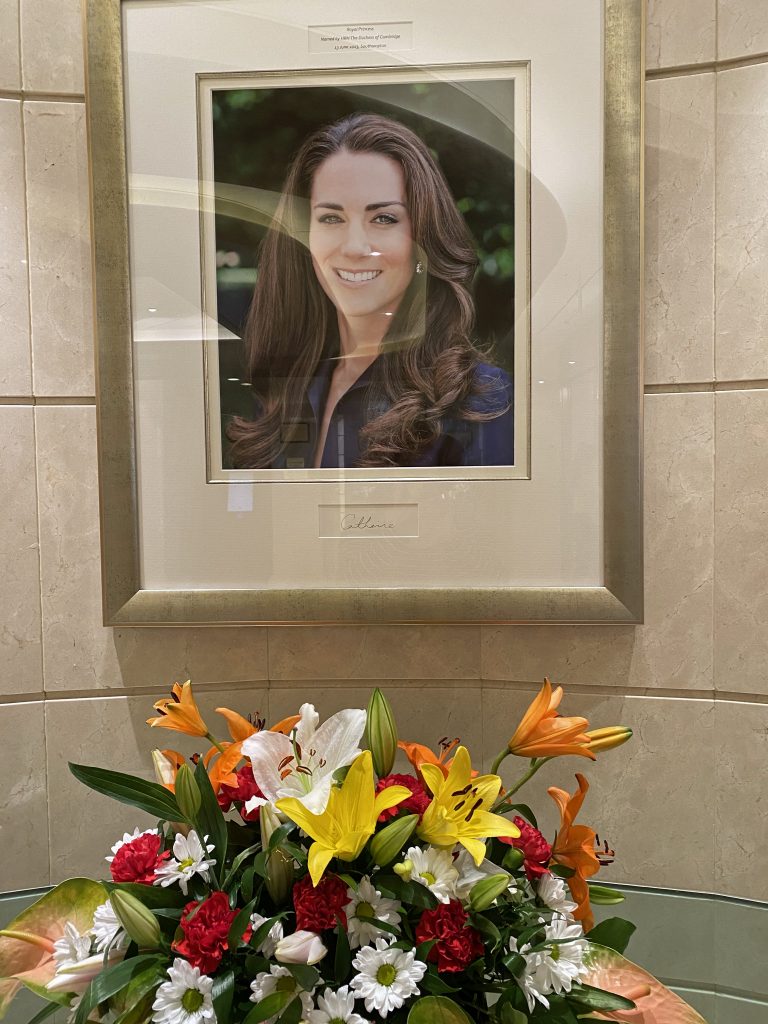 We had delicious salads and split a pizza margarita... and then we waited for an hour or so in our room before getting on a tender (no more lines) and spent the afternoon being tourists in Cabo. The only other time we have been here was in 1999, when Dave and I brought (what were we thinking?) Lisa and three of her classmates to Cabo San Lucas after they graduated high school. 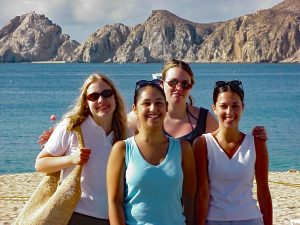 Taylor, Jen (Lucy's godmother), Leslie, and Lisa. This photo was taken with a digital camera in 1999 - probably a whopping 2 megapixels? Dave and I could easily spot the hotel we stayed in during our 1999 visit - it is pink - but nothing else was familiar. Today we just walked through town, looking into the shops, but, honestly, after our huge downsizing purge, there was nothing we needed to buy. Didn't stop us from looking... or taking photos: 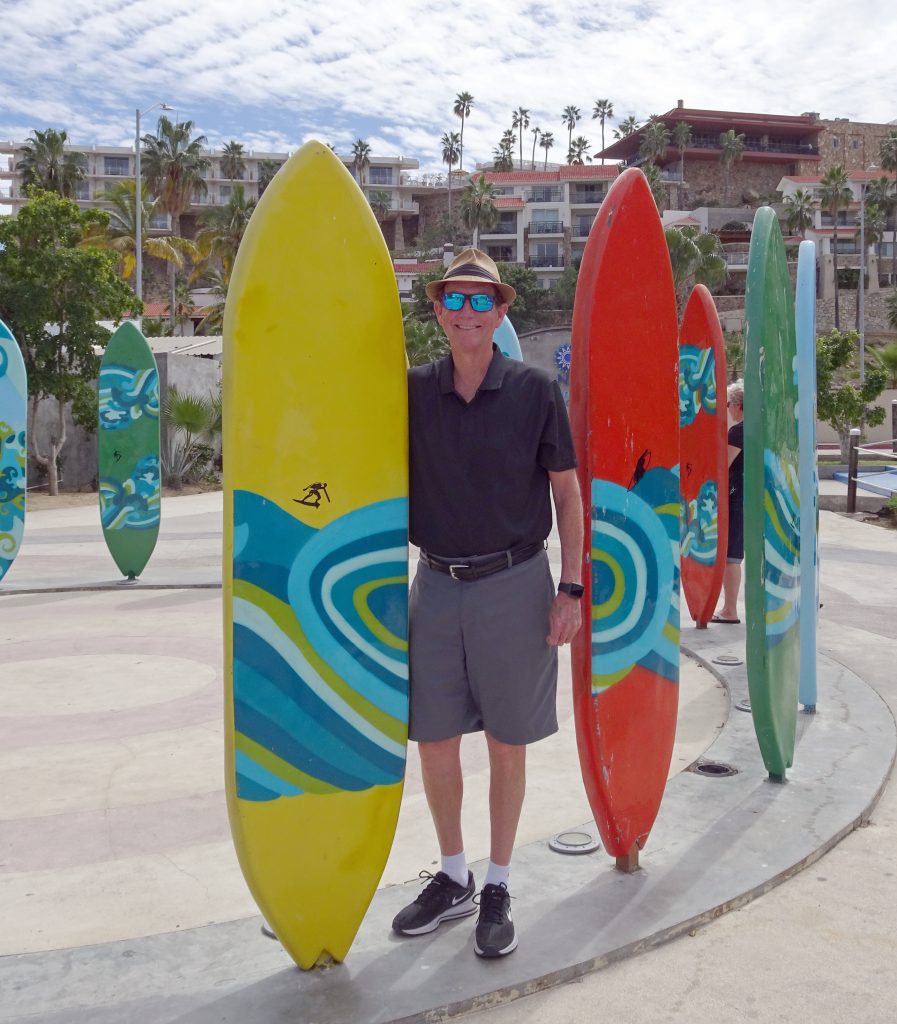 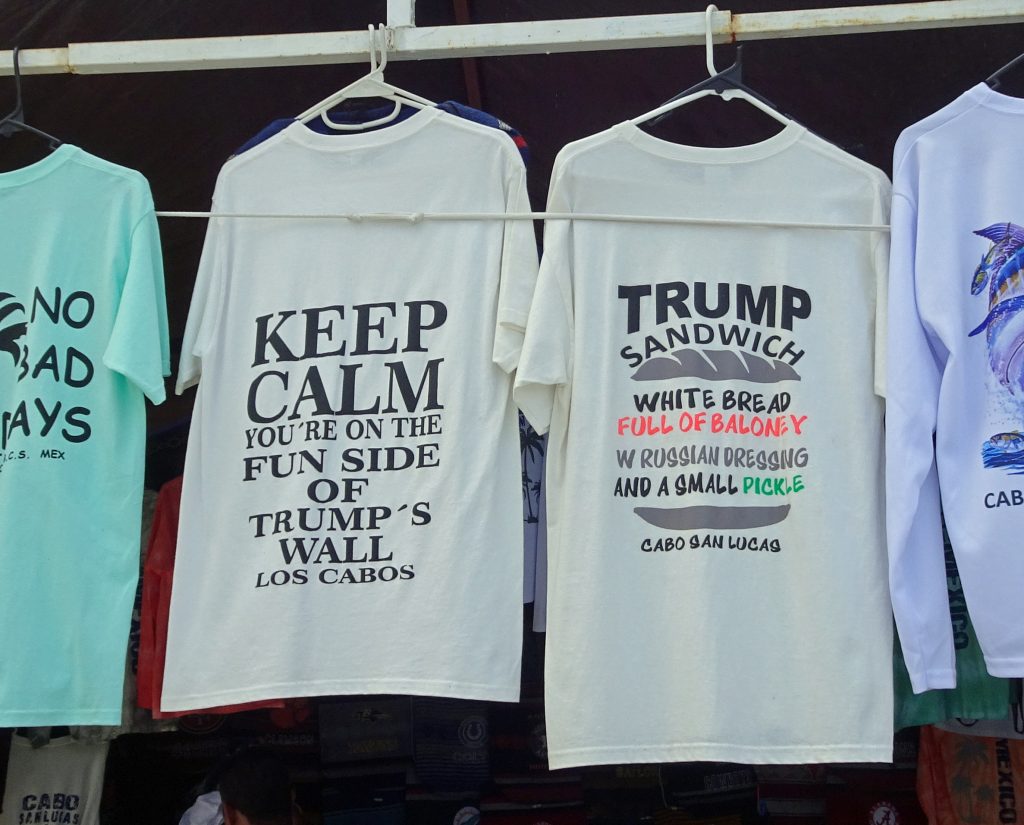 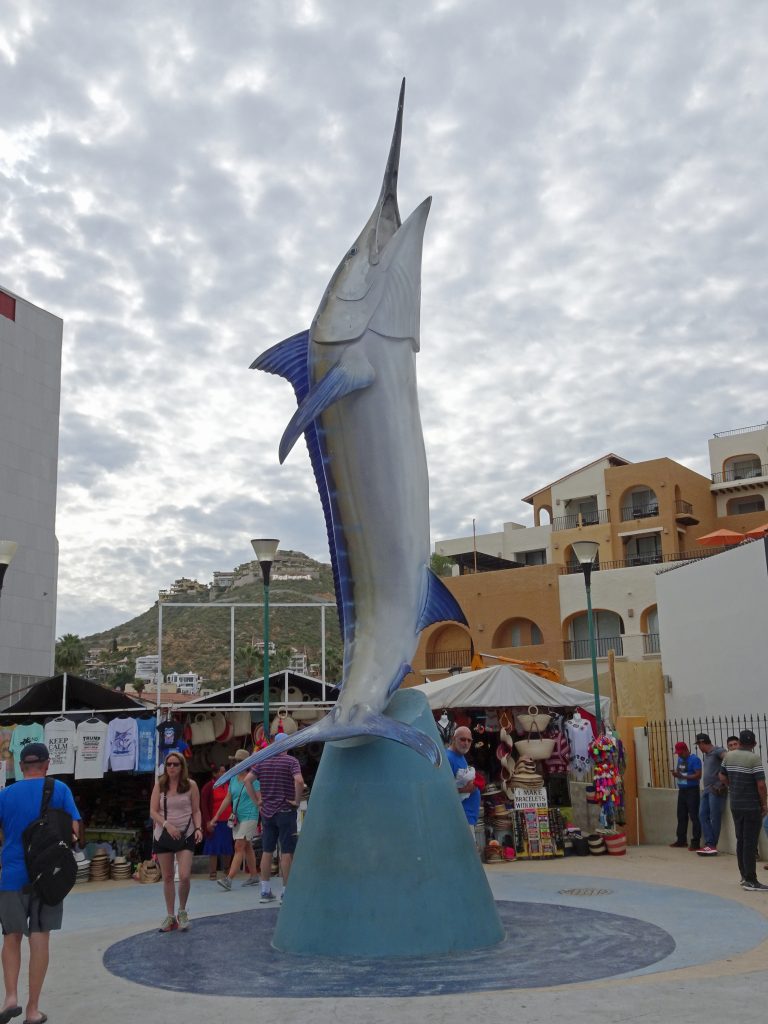 We walked around Cabo for several hours. The weather was perfect. Before heading back to the ship, we stopped at a harbor-side joint, Sancho's, for - what else? - Baja fish tacos and a margarita 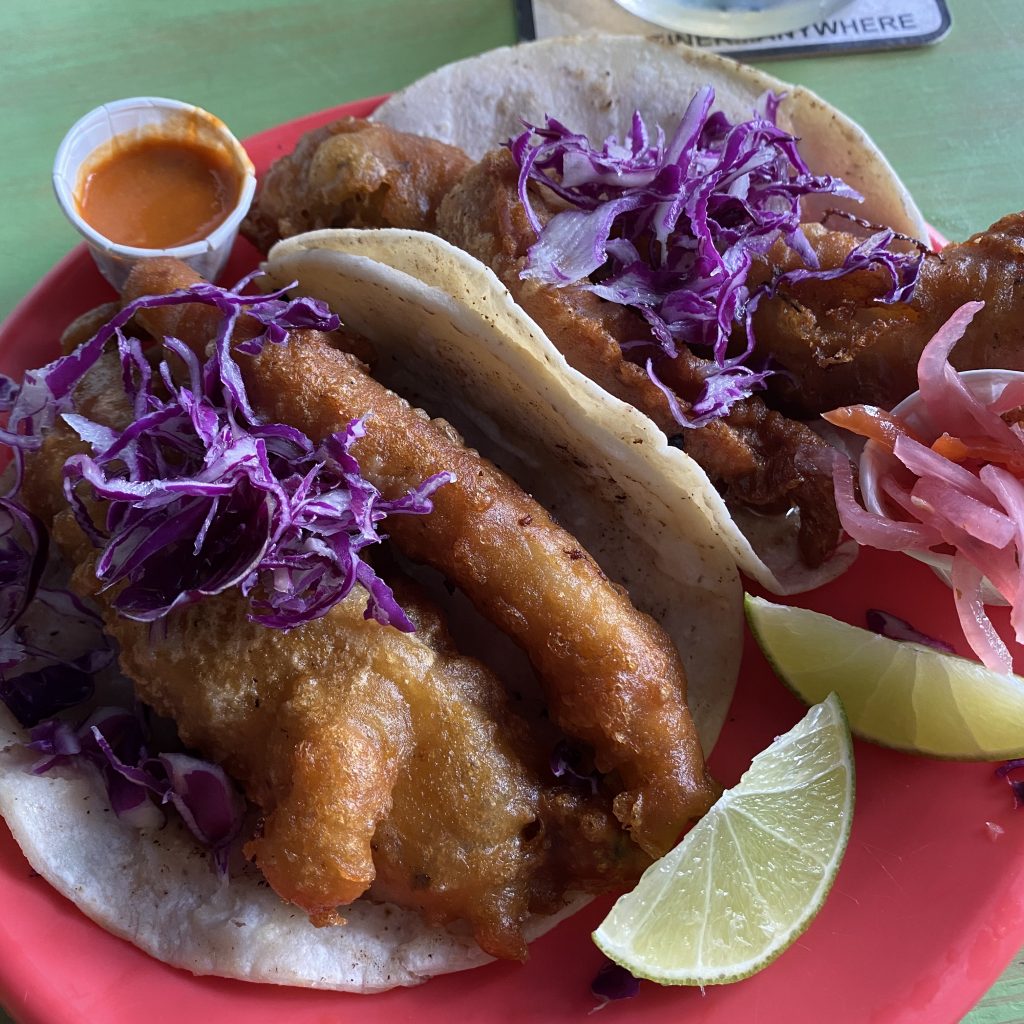 DT snapped a few more tourist photos. We did not go into the famed Señor Frog's, but he did pose with me for a photo. 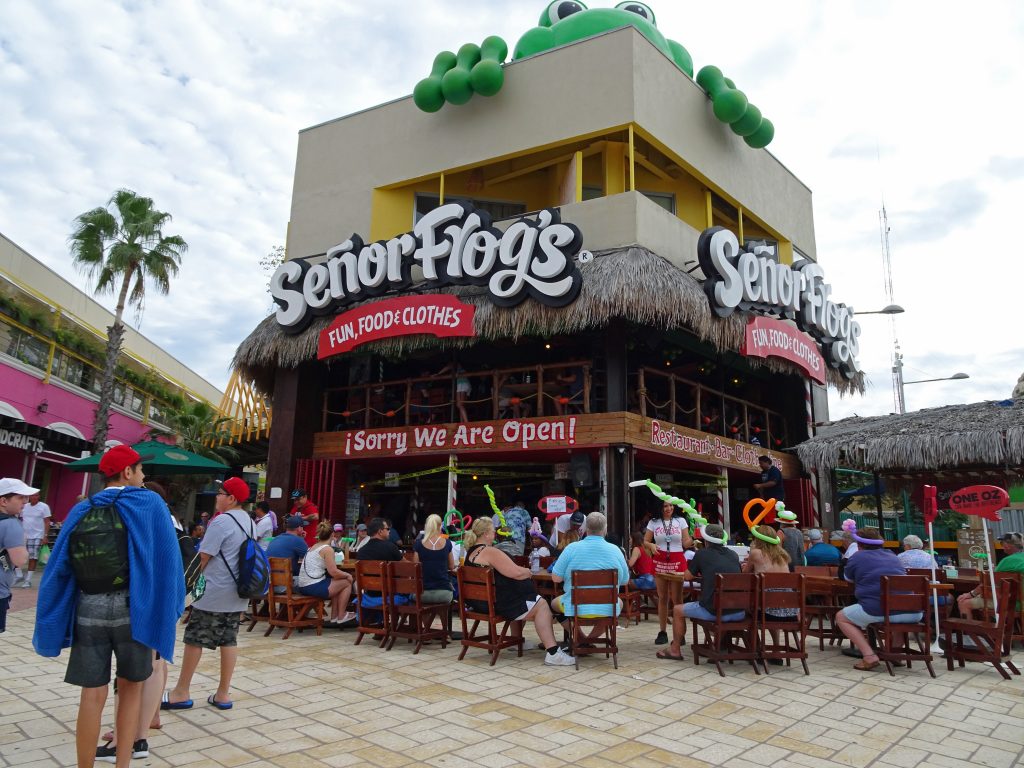 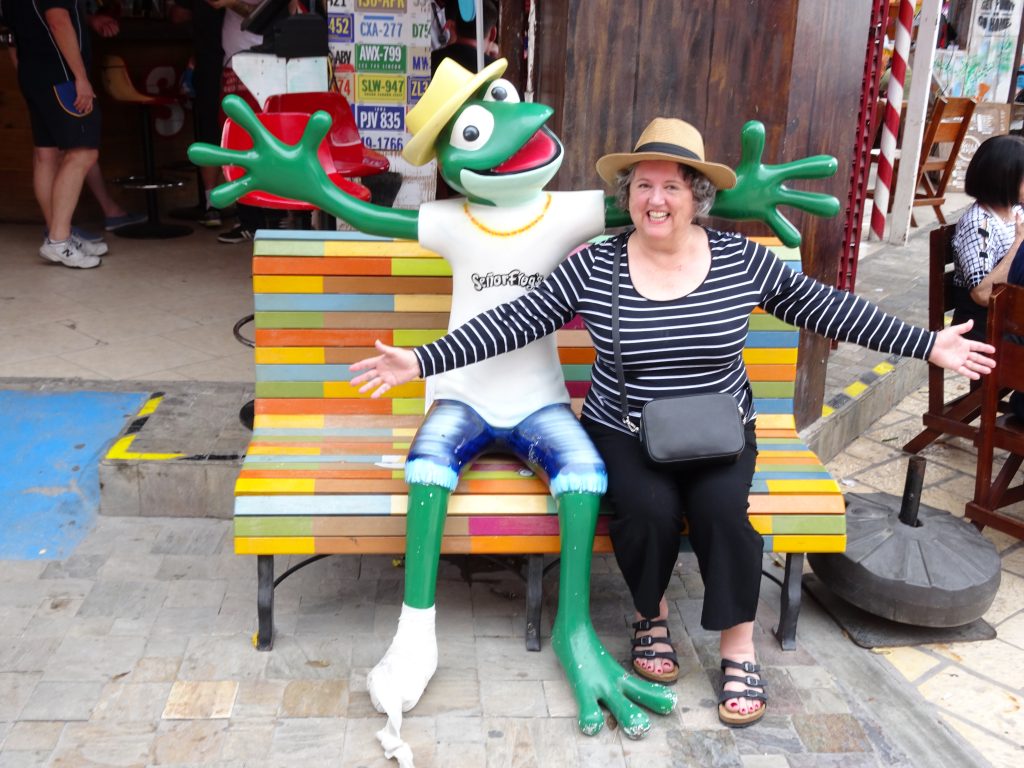 We returned to the boat a few hours before the anchor was lifted and we left port, heading towards Mazatlan just after 7p. Even later, we went to the dining room for a nosh, and then attended the comedy show in the Princess Theater, featuring A.J. Jamal. We actually sat next to Tony, the man we met last night. Again, he was dapper and stylish (as were we). A.J. Jamal was really funny and we all laughed so much. A great show.

This evening we also fetched our print from the "formal night" photo session. This is us at nearly 65 years of age, all dressed up: 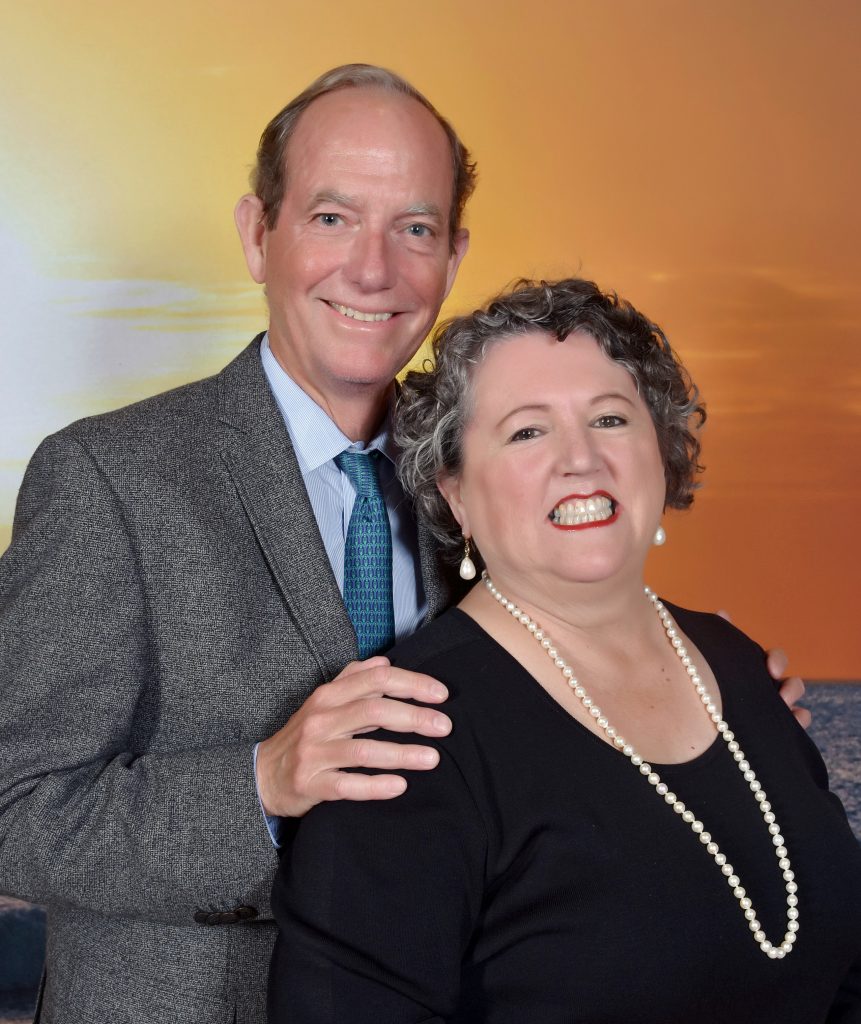 Until my next update from Mazatlan, I remain, your Cabo San Lucas correspondent.