Somewhere in the Pacific (between Los Angeles and Cabo San Lucas): WARNING: A lot of food photos in your future! A lovely night of sleep, being gently rocked all night by the ocean. We woke early, but were a bit confused by the time. There was a one-hour time change (ahead) overnight, but since our phones/watches are not using cellular data, they did not switch automatically. I had to do it manually. It's like living in the caveman days, people! And look! The maritime world still refers to the Baja Peninsula as California:

After coffee in our our room, exercise, etc., we finally went to lunch in the Concerto dining room. Agreeing to sit with strangers (always a fun way to meet new people), we were escorted to a wonderful ocean-view table and proceeded to dine with two other SoCal couples and a couple from Texas. Lunch in the dining room is very relaxed and service is quite nice. Dave and I ordered the Caprese salad which was served with a bit of anchovy in the dressing. Different. I had sauteed red snapper, served over succotash; DT had a mixed grill which was served with meat, meat and more meat. There is always room for dessert on a cruise ship, right? A little fresh fruit tart: 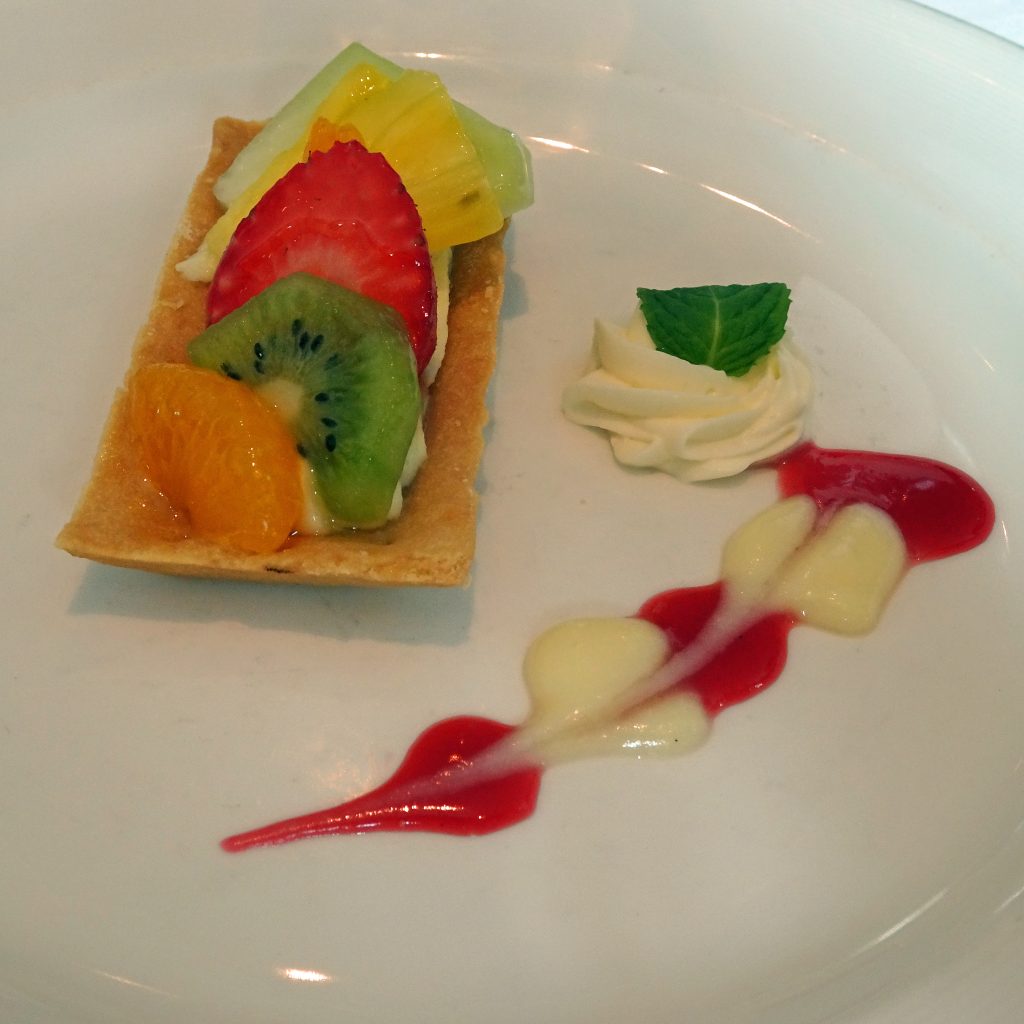 Best thing after lunch is to return to your stateroom for a nap go for a walk on the sports deck. We walked and walked. Dave tried his hand at the driving (golf) cage and practiced on the putting green.

We also finally located the fitness center. It is massive. 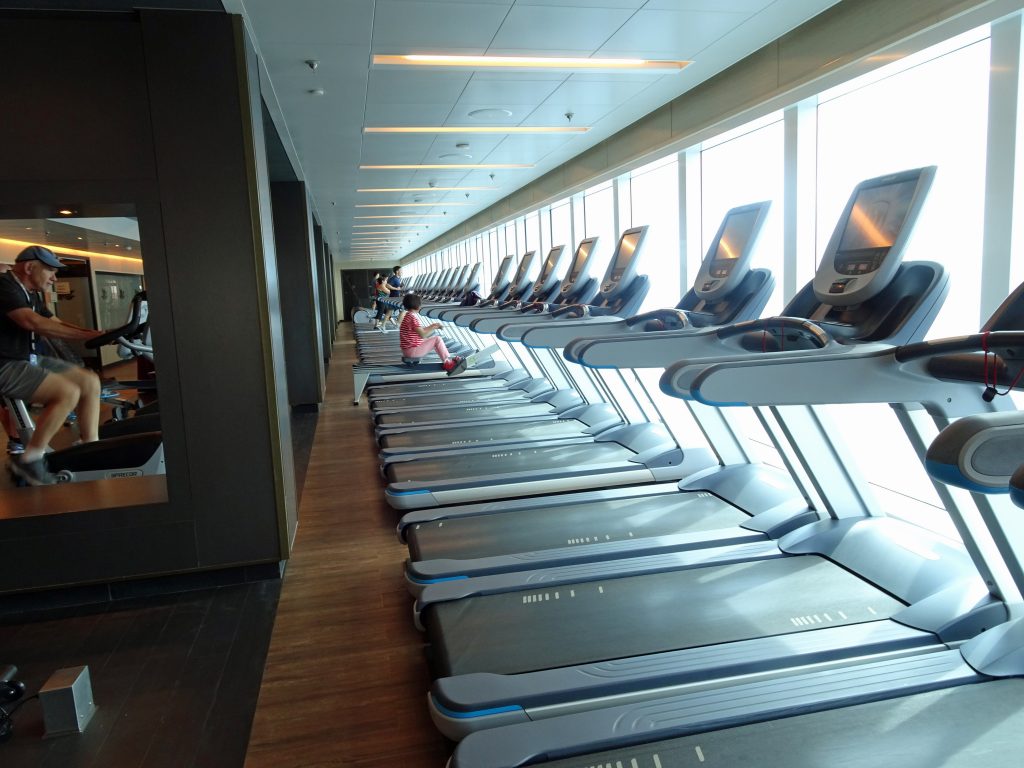 After our stroll, we walked through the buffet, only to discover mountains of sushi! (We only looked - and snapped photos.) Dang, the Royal Princess is certainly lucky Leo isn't sailing with us. That boy can take-down sushi like it's his job. Though we have yet to dine at the buffet(s), they are very impressive. Besides the usual burgers and pizzas, there must be ten different cuisines to sample at any given time. Indian food was offered next to the sushi, Asian noodle bar, fresh fruits galore, mountains of huge shrimp, salad bars, and an entire room filled with desserts. The offerings change daily. 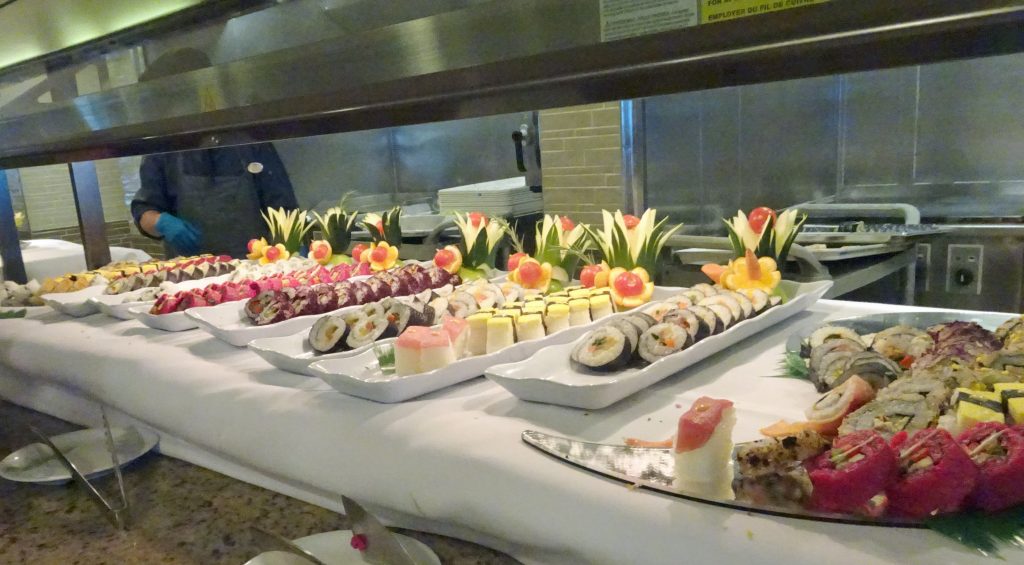 This ship also features "skywalks" that arch over the ocean, curving out from the sides of the deck. It is a bit disconcerting, but fun, to look down and "see the sea" below your feet. 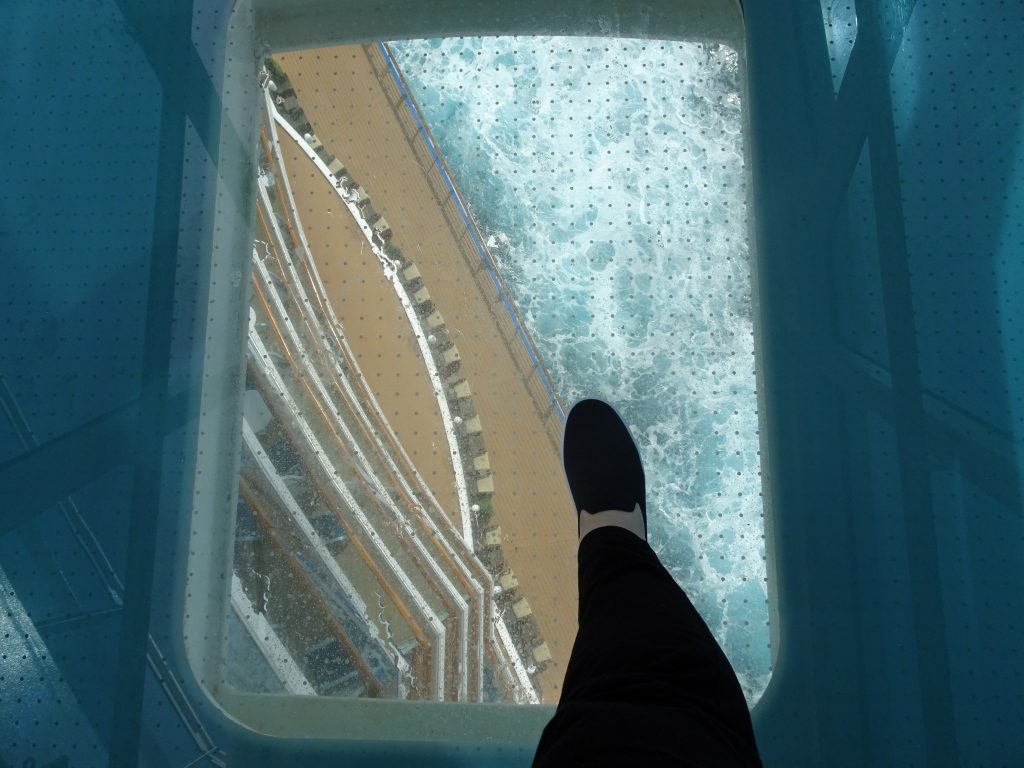 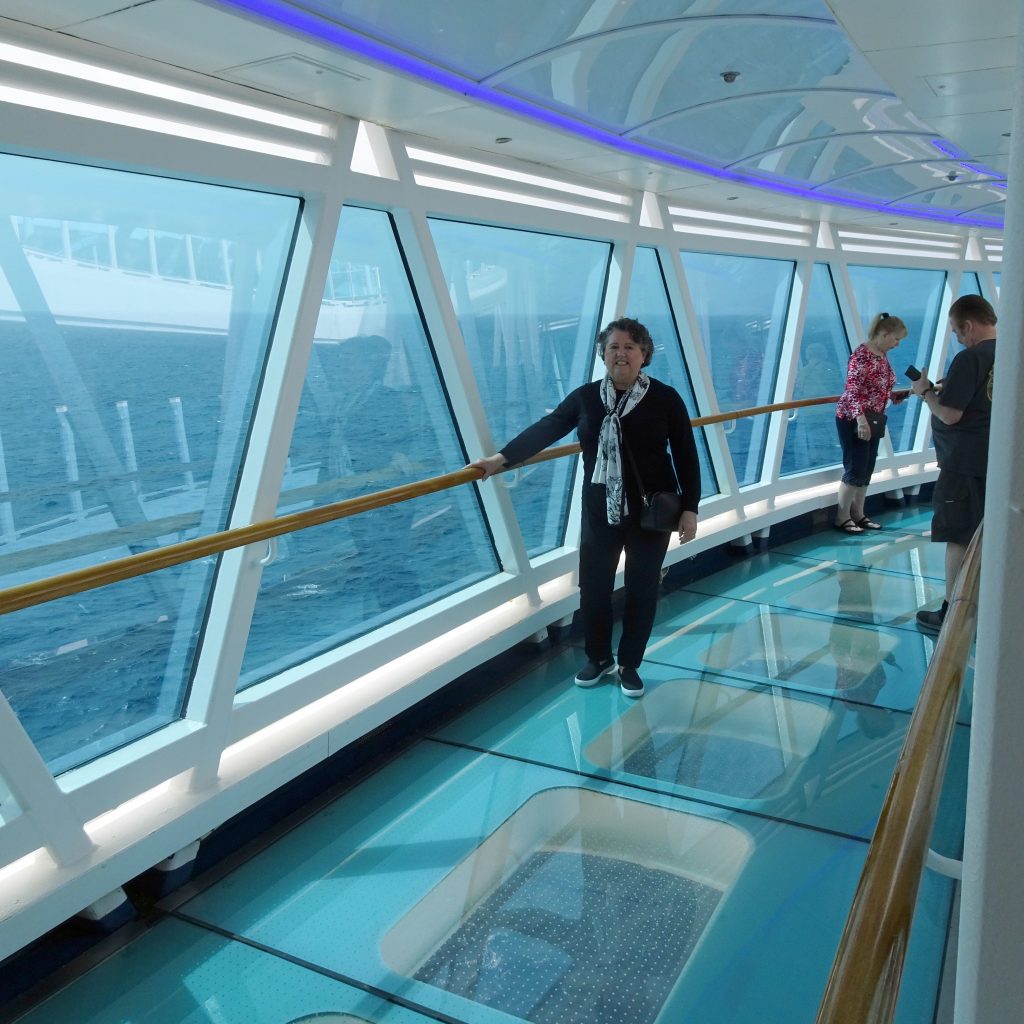 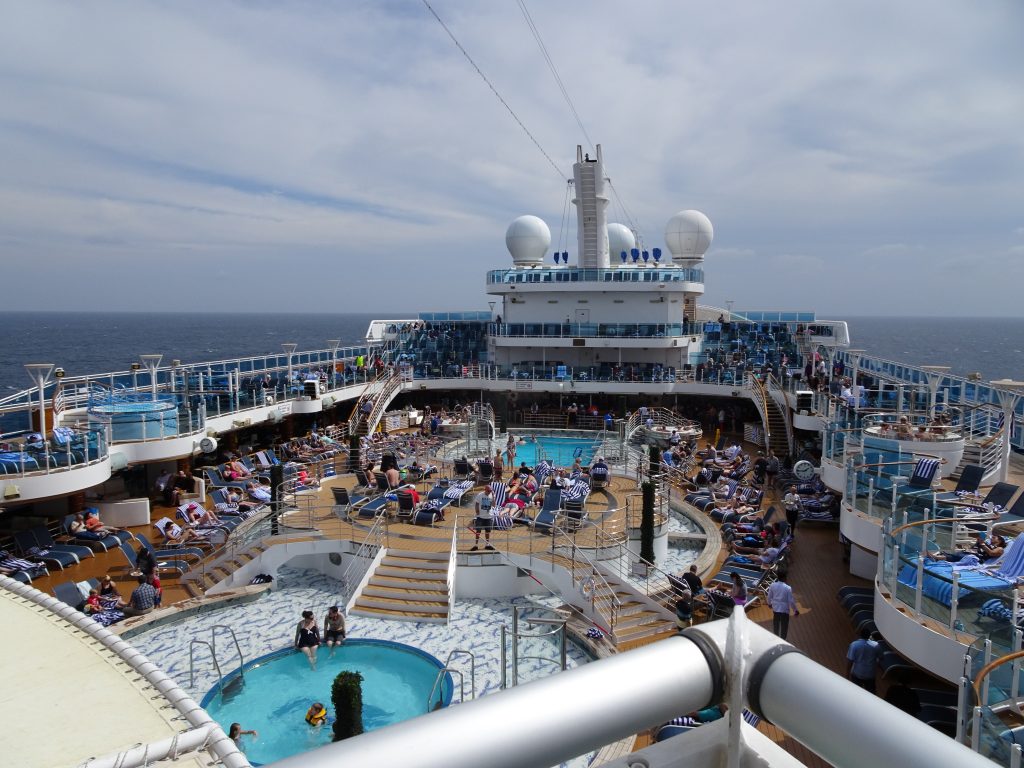 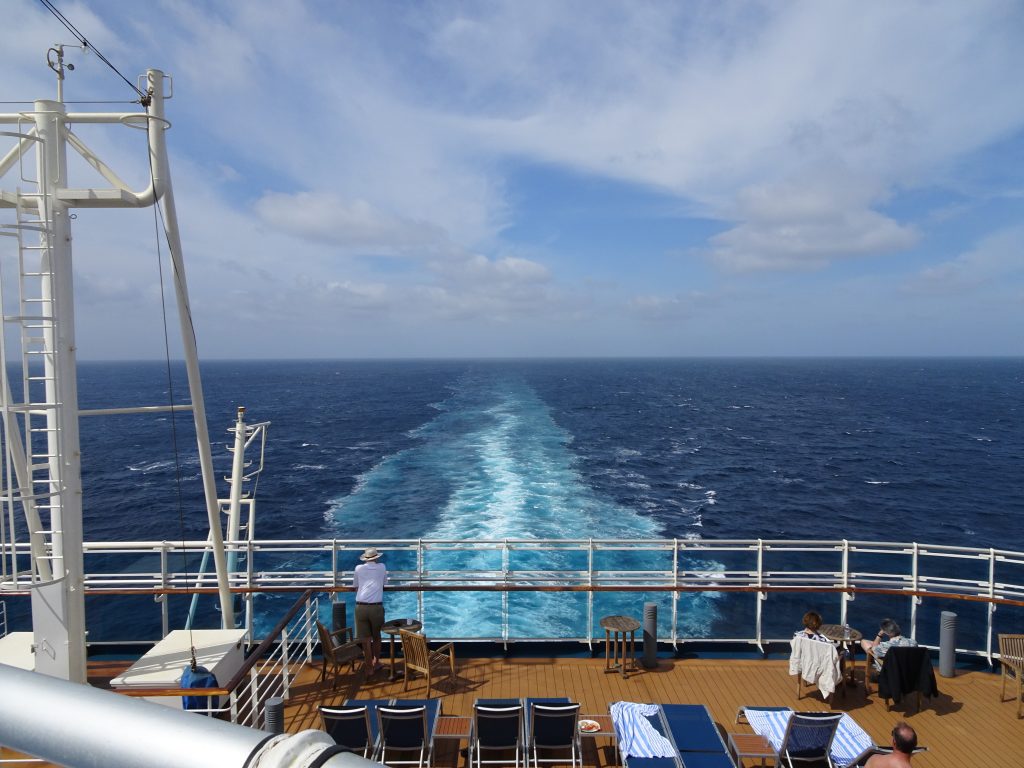 While it was so sunny (and wind-free) during the morning and early afternoon, by 3 o'clock, the skies turned grey, it suddenly seemed foggy and there were plenty of white caps on the water. We bought a cheap pair of binoculars (please don't remind me... we have a very nice pair in the glove box in our Jeep parked at the cruise dock!) and returned to our stateroom to look at the birds, and hopefully a few whales or dolphins. (FYI: Nothing spotted.) DT wanted to enjoy a beer on the balcony, but we had to return indoors before long. Too cold!

This at-Sea day was one of two "formal nights" on the Royal Princess... which means (these days), anything between a tux and a tee shirt. Honestly, most cruisers made an effort, and the slackers mostly hid-out in lounges and the buffet.

On nearly every ship we have sailed, one night is devoted to the Captain's champagne fountain, where a tower of coupes are stacked and passengers are invited (photos offered for sale later!) to pour a bit of the bubbly into the cascade. Though we never saw a bride or any hint of a wedding today, a couple were wed on the Royal Princess this afternoon, and the bride was the first to douse the waterfall of champagne. (NOTE: bride not pictured below.) 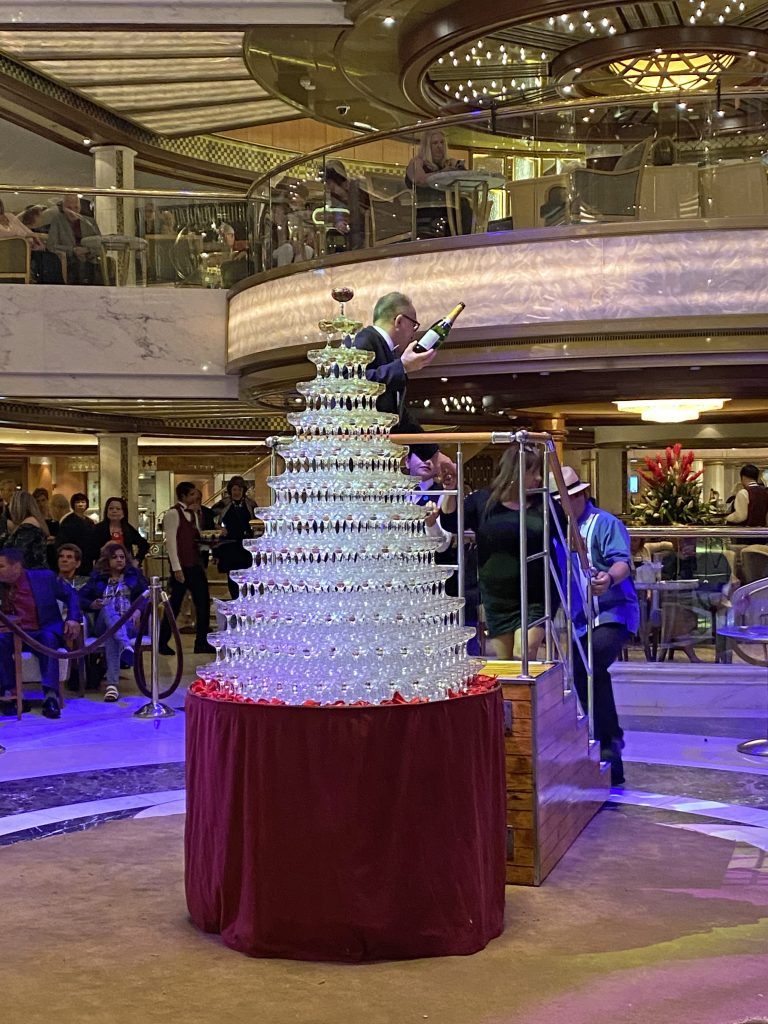 After the champagne was poured, waiters floated around the three-story atrium, handing out champagne like it was water.

Dave and I had reservations at the Italian restaurant, Sabatini's, tonight, so went there after our champagne toast. Our reservations were quite late (because we like to dine late) and the restaurant wasn't too busy and we had great service. Prepare for four food photos. Dave ordered roasted vegetables as his appetizer: 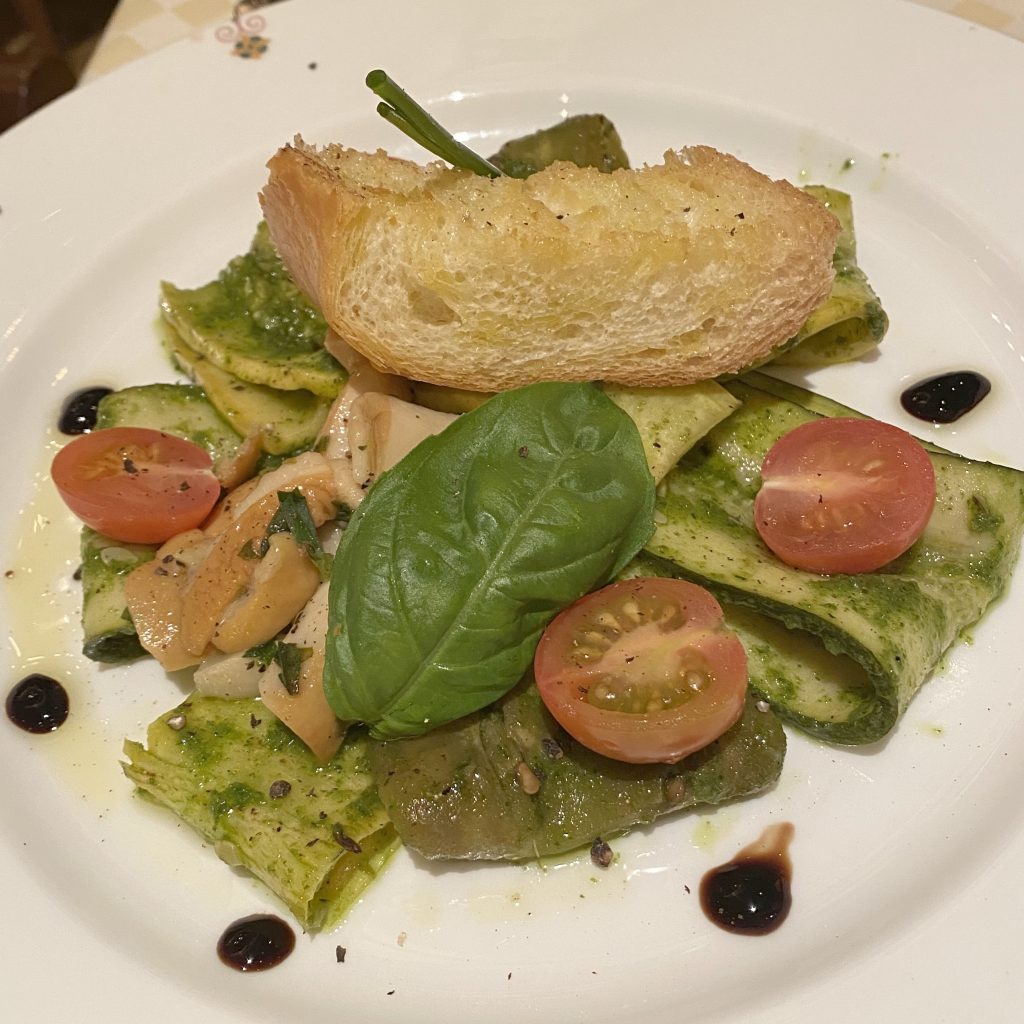 I had the artichoke souffle (and I think I can re-create this dish, Mary and Captain Jim): 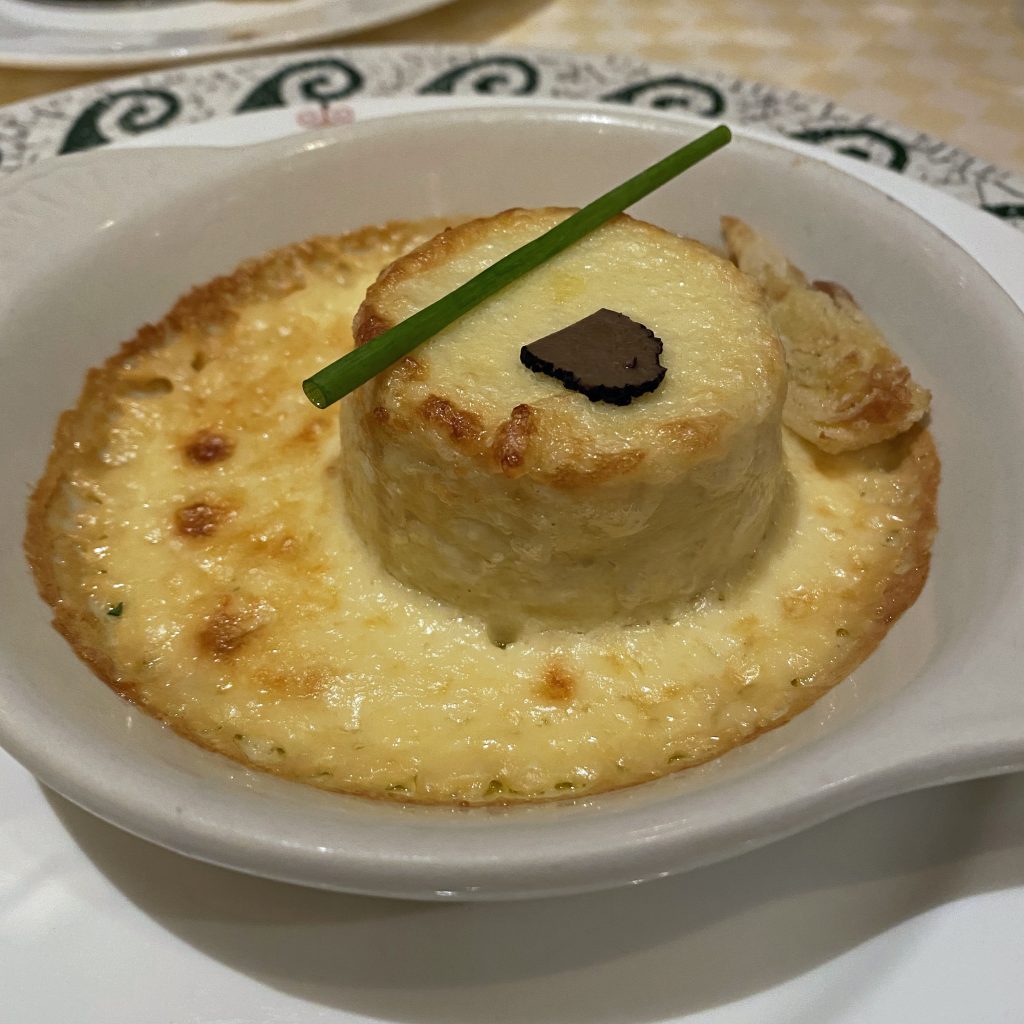 For a main dish, Dave had the pasta with every sort of non-kosher fish imaginable: 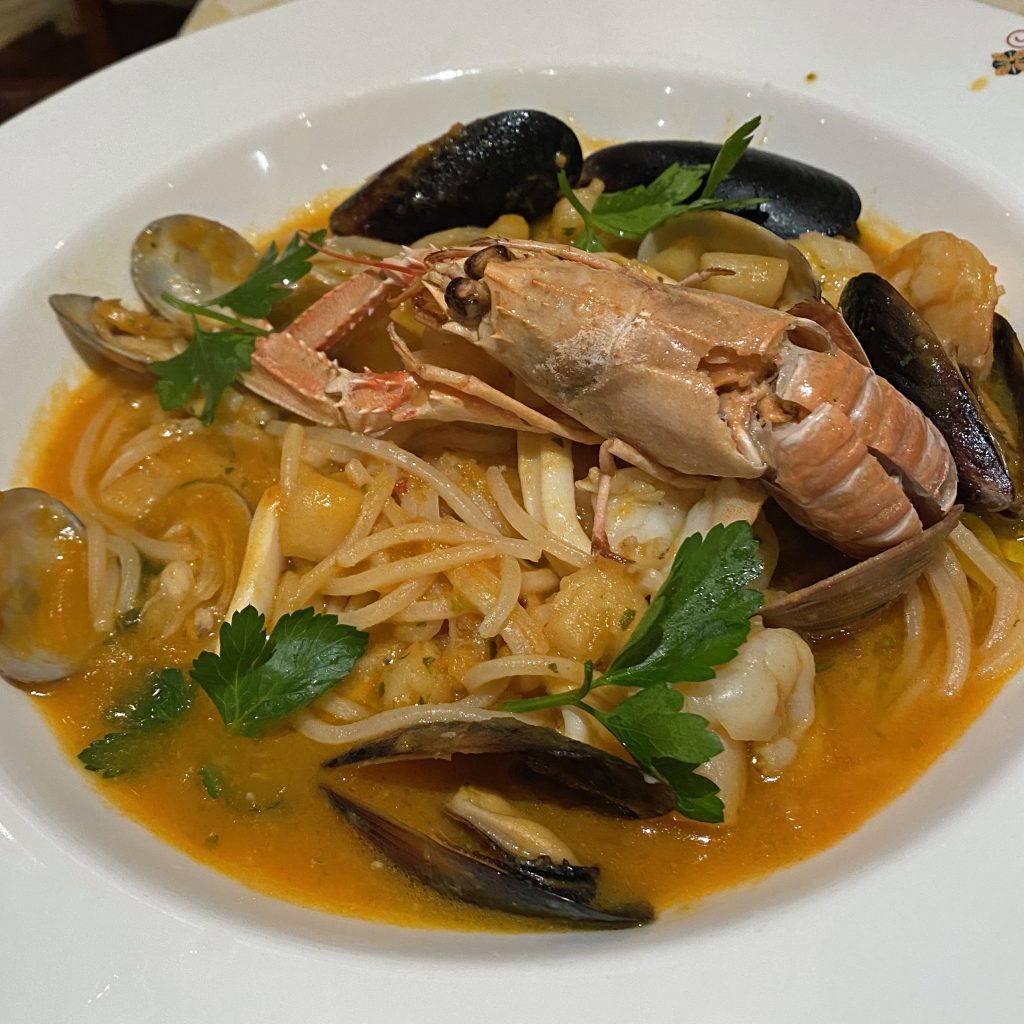 I ordered the braised short ribs over penne... something I make all the time, but is still nice to enjoy when someone else does the cooking. 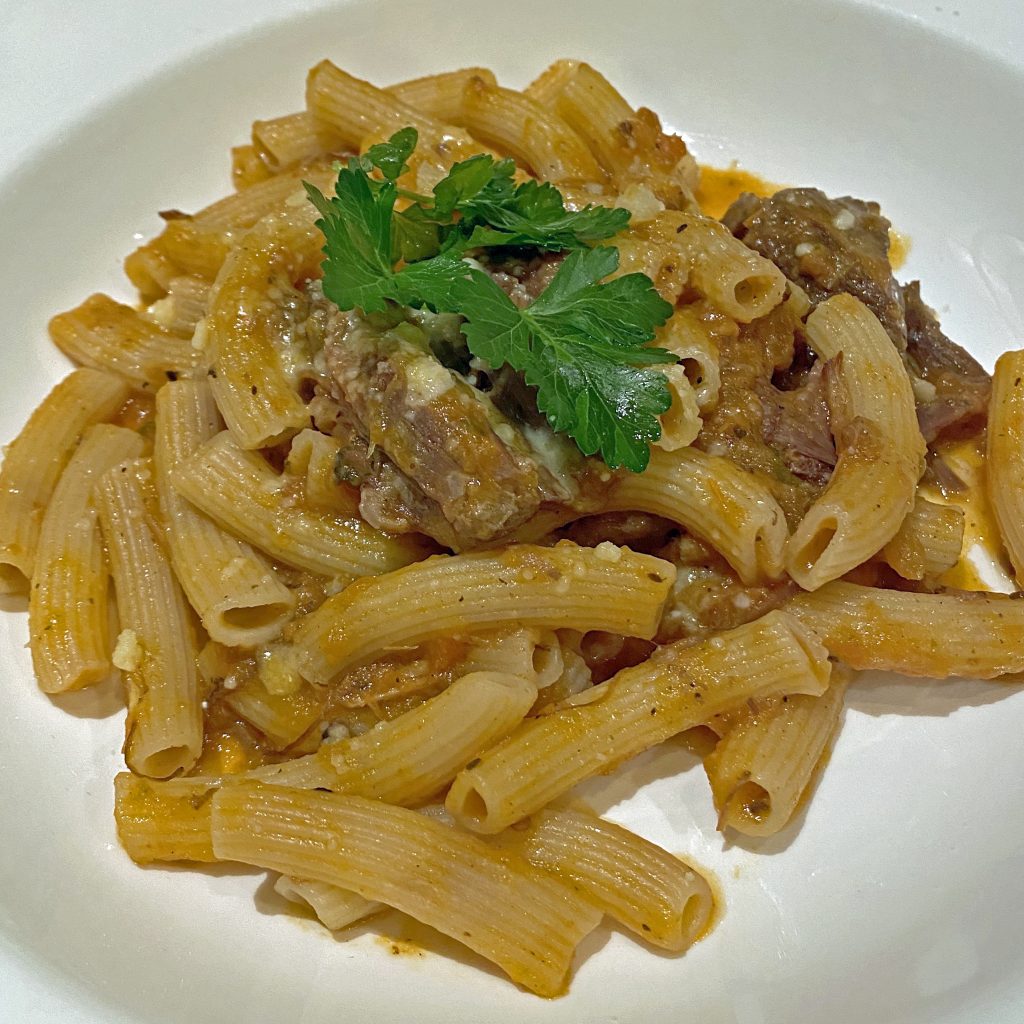 By the time we finished our meal, the party in the atrium was crazy. The champagne fountain was long-gone, but so many people were dancing to the live music. Everyone was having so much fun! 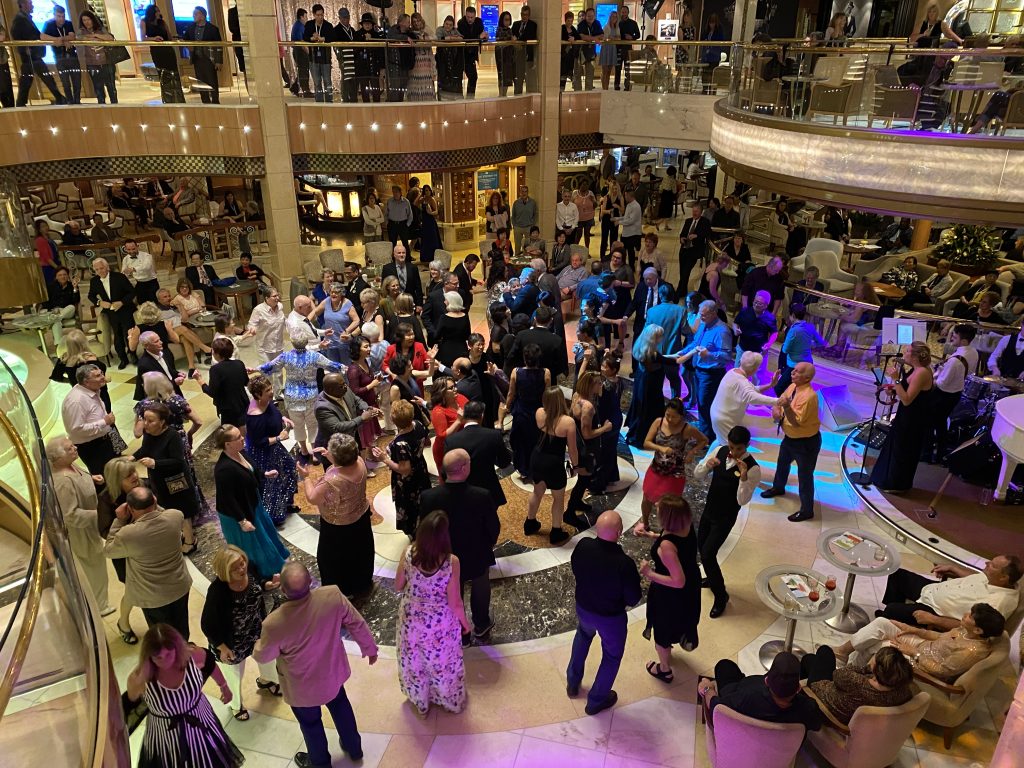 We met a lone gentleman, in a tuxedo, leaning over the rail (with us) watching the dancers. Tony said his wife had to go out of town at the last minute, but insisted he go on the (uninsured) cruise without her. He was going to the Whitney Houston "tribute" show in a few minutes in the theater. We decided to join him and, dang, if we didn't discover Tony was a life-long waiter at the famed Scoma's restaurant on the wharf in San Francisco... the favorite restaurants of DT's dad, and often visited during Dave's growing-up days. Such a small world. Kudos for Tony going alone on the cruise - and for bringing his tux. 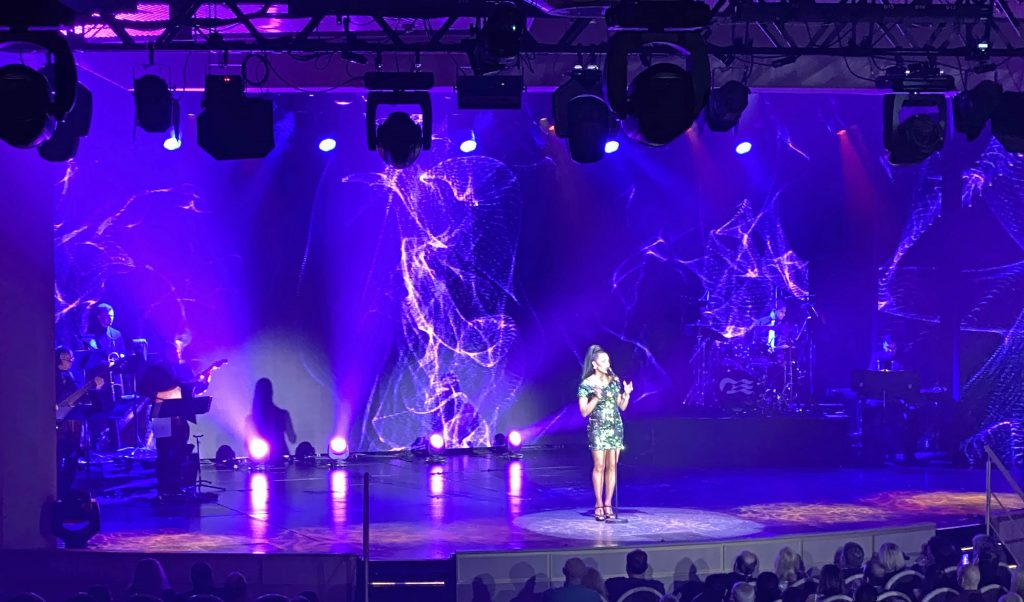 The show was good, and the singer, Cheaza, told the audience she had a 30 year old daughter and was a grandmother (though Cheaza looked to be about 40 to me). Cheaza sang many favorite Whitney Houston songs and entertained the audience with raucous interaction - including dancing in the aisle with a man from Utah with 47 grandchildren, and, according to the grandpa, only one wife.

Just another day of cruising, folks.

Until my next update, hopefully from Cabo, I remain, your bubbly correspondent.