Mazatlan, Mexico: If you have not been a long-time reader, you may have missed that my mom and dad used to winter in Mazatlan during the 90's in their RV. Dave, Lisa and I would often fly down to visit. My parents were very involved with a local orphanage. Though my mom has passed away, my dad and siblings still help support the orphanage through a fund that helps provide fresh fruits and vegetables to the kids. Interestingly enough, another great resource to the local orphanages are the cruise ships visiting Mazatlan. The ships often give fresh foods (maybe they did not use) and new bedding (maybe they are switching out new coverlets) and other items the kids could use. I just love this about cruise ships and I think more attention should be given to their generosity around the world. Today, DT and I did not visit the orphanage bearing a charity with my mom's name. My dad knew not one person currently working at the orphanage would remember my mother anymore and that it would upset us more than enlighten us on a visit.

Still, our visit to Mazatlan today was a serious trip down Memory Lane, though we have not been here since Lisa was in college (2000-ish). Getting around town today was a bit of a cluster, because the entire community was in preparation for a Mardi Gras (Fat Tuesday) parade beginning at sundown.

The Royal Princess blew into port around 8a this morning, following the same Carnival and Holland American ships from yesterday in Cabo San Lucas... which, ironically, are all owned by the same parent group. 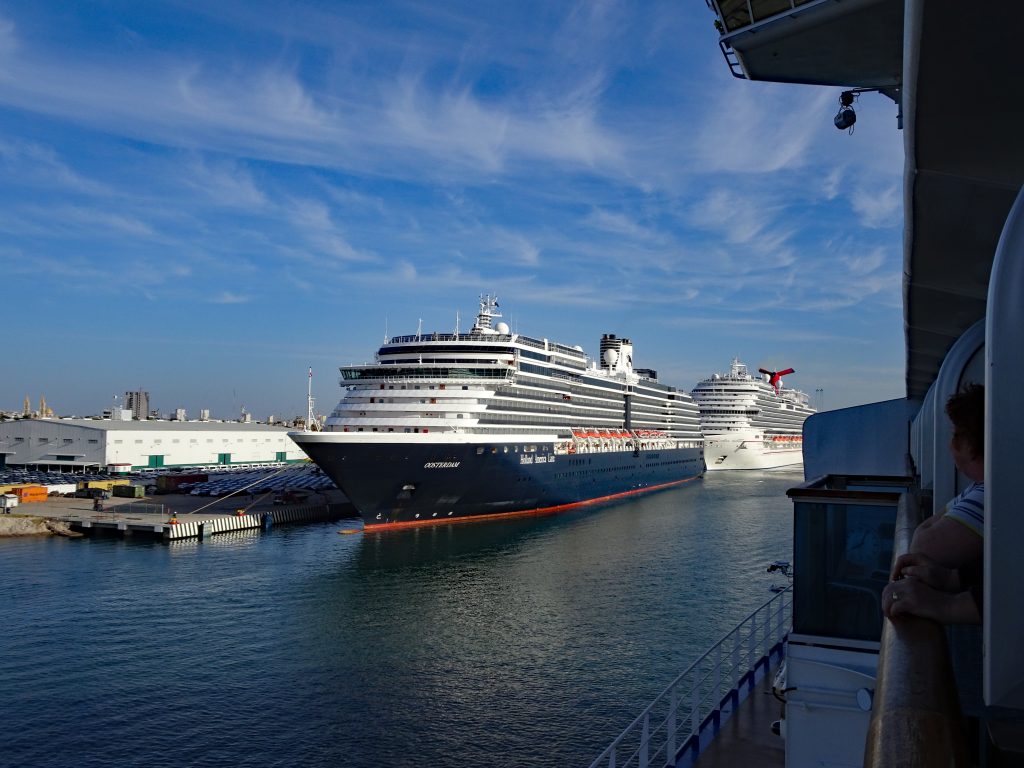 The Oosterdam and Panorama were already tied-up when we arrived this morning. Our captain sailed past the other ships, spun us around, then we tied-up behind the other two ships - all of us facing out to sea when docked. Later, than sooner (due to my long-exercising traveling partner), we left the ship, caught the free shuttle from the cruise dock into the local streets and then found a pulmonia taxi (an open-air golf-cart/tuk tuk transport) to the old town area of Mazatlan... so we could get our bearings. Our driver left us at a very familiar town square - which was most consumed with Fat Tuesday decor in preparation for the Lenten festival. 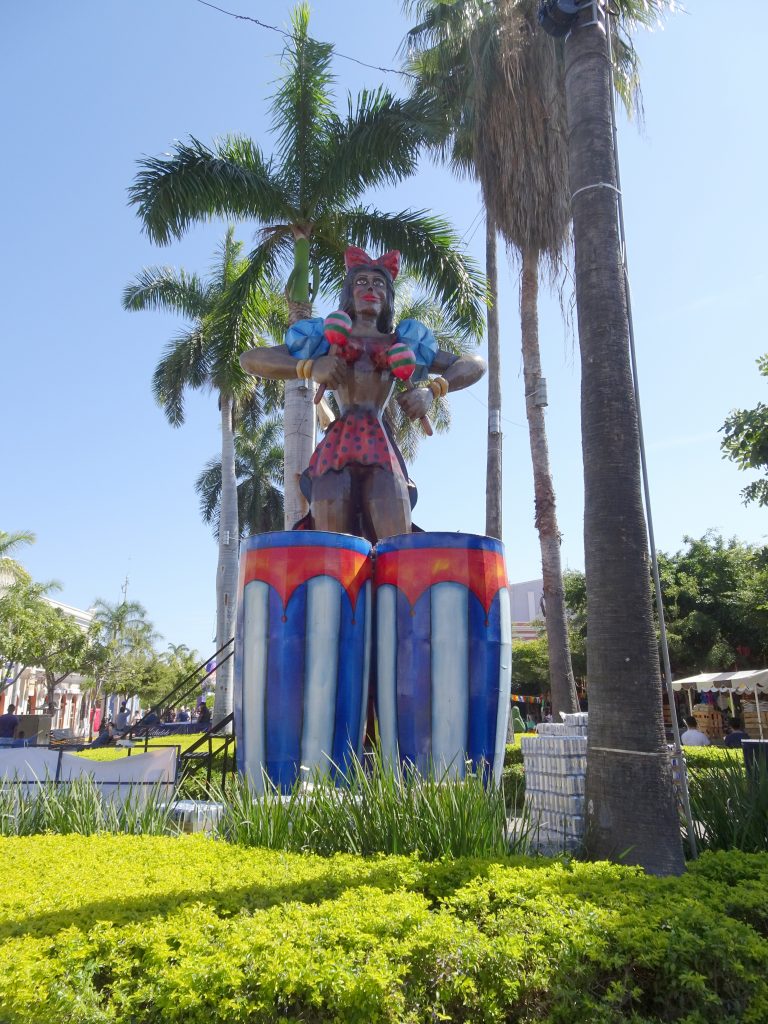 We next visited the beautiful cathedral in old town:

The surrounding streets were beginning to fill with kiosks and pop-ups selling anything anyone could possible need the night before Lent: 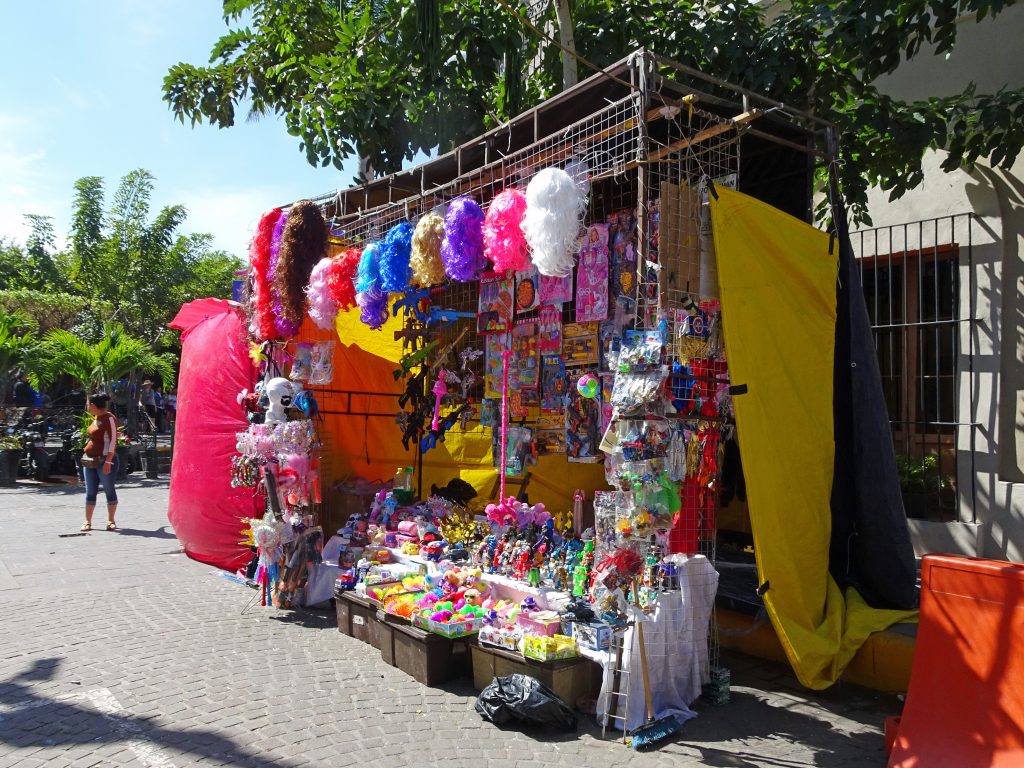 And we were able to locate the main open-air market we used to frequent with my parents, where locals go to buy cheese, meat, dresses, phones, eggs, purses, shoes, vegetables, belts, socks and chicken.

And I think tonight is the last night many of the Mazatlan citizens eat meat until Easter, but the butchers were doing a brisk business this morning: 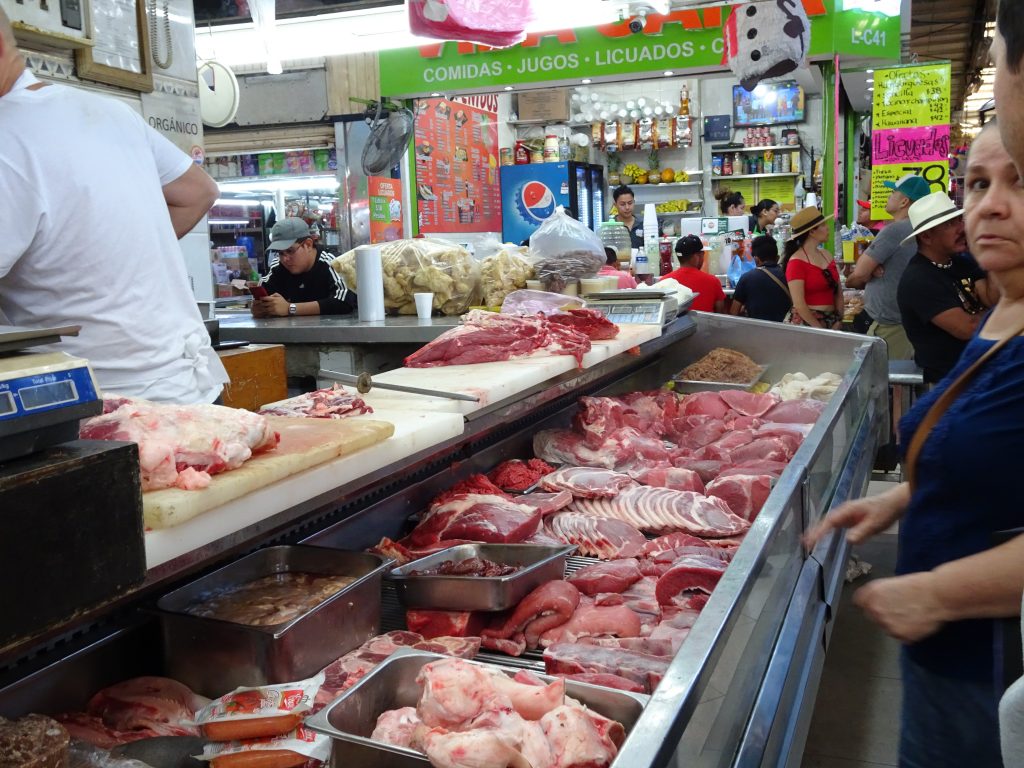 From the market, we began walking towards the sea, meandering through narrow lanes and past pretty pastel houses:

Along the shore, there are many mermaid (or siren) statues: 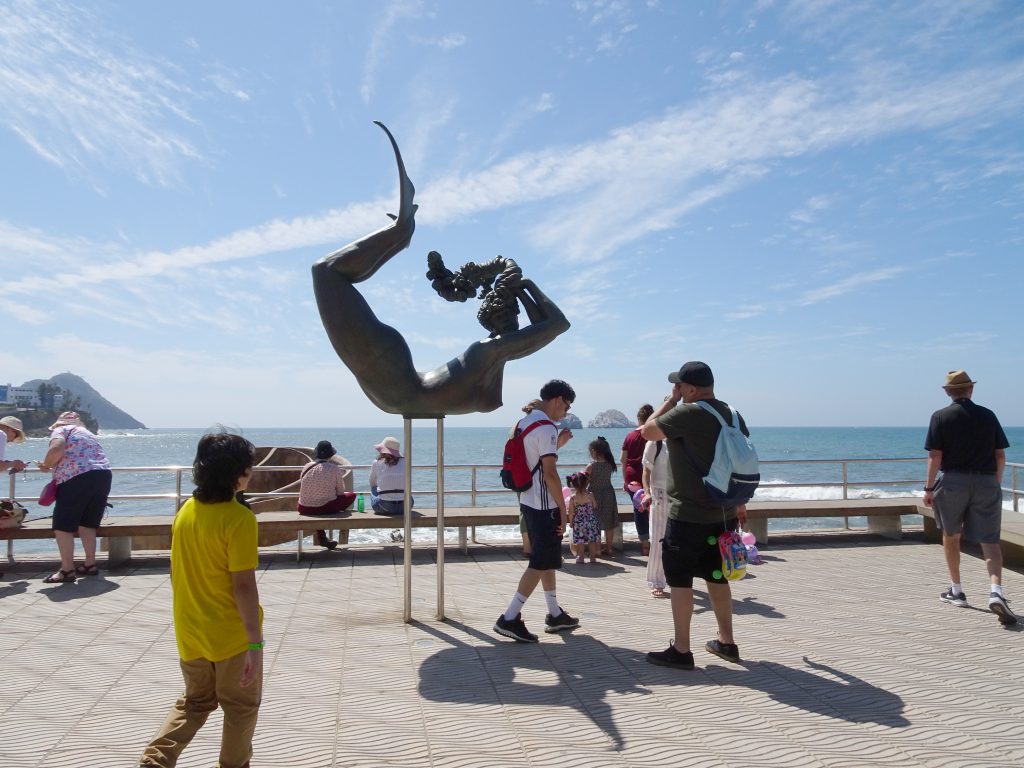 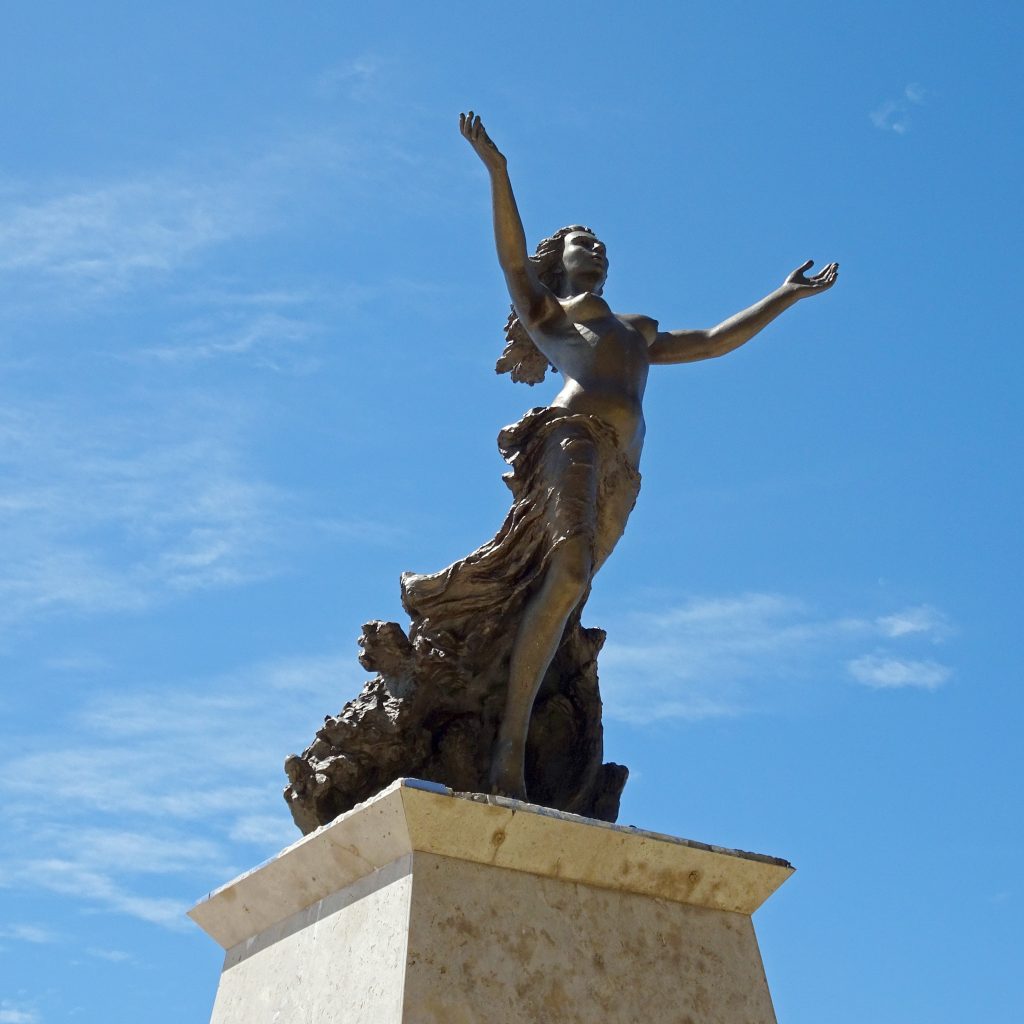 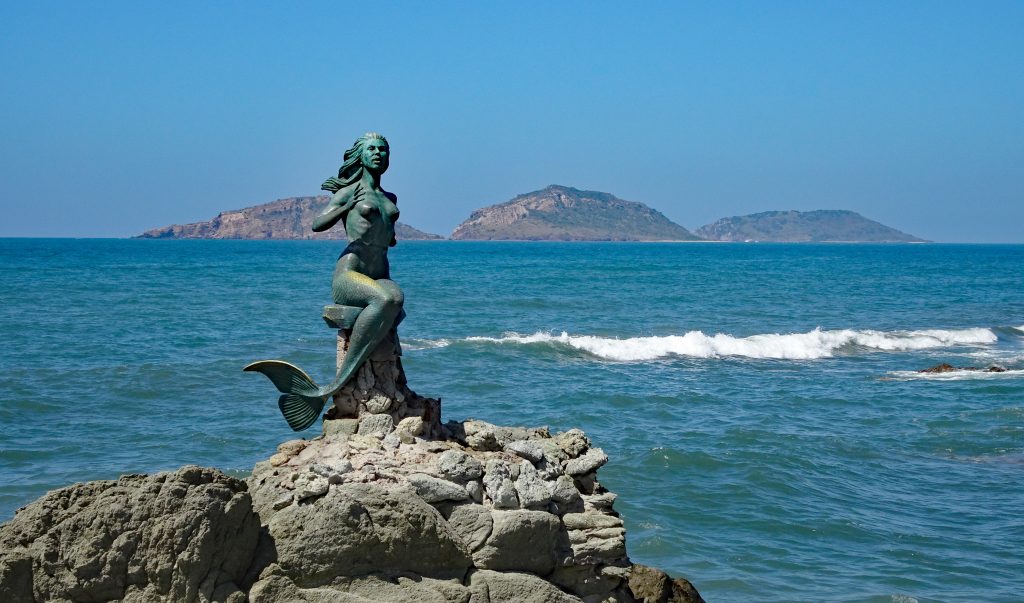 After watching a few young men cliff-dive (honestly too frightening for me to watch), we continued walking north up the paved path above the beaches, until we were stopped due to the upcoming parade. At this point, we hopped in another pulmonia. Dave wanted to go back to his favorite restaurant in Mazatlan - Chili's Pepper - about as far from the cruise port as one could get... not to mention the major road along the malacon (sea shore) was closed for the parade. Not to worry, our driver knew his way around town and didn't up-charge us for his trouble.

Chile's Pepper was near the hotel we used to stay in when we visited Mazatlan. It is on the beach and serves garlic fish - a white fish fillet drowning in garlic and butter. The restaurant is still in business and still getting rave reviews. 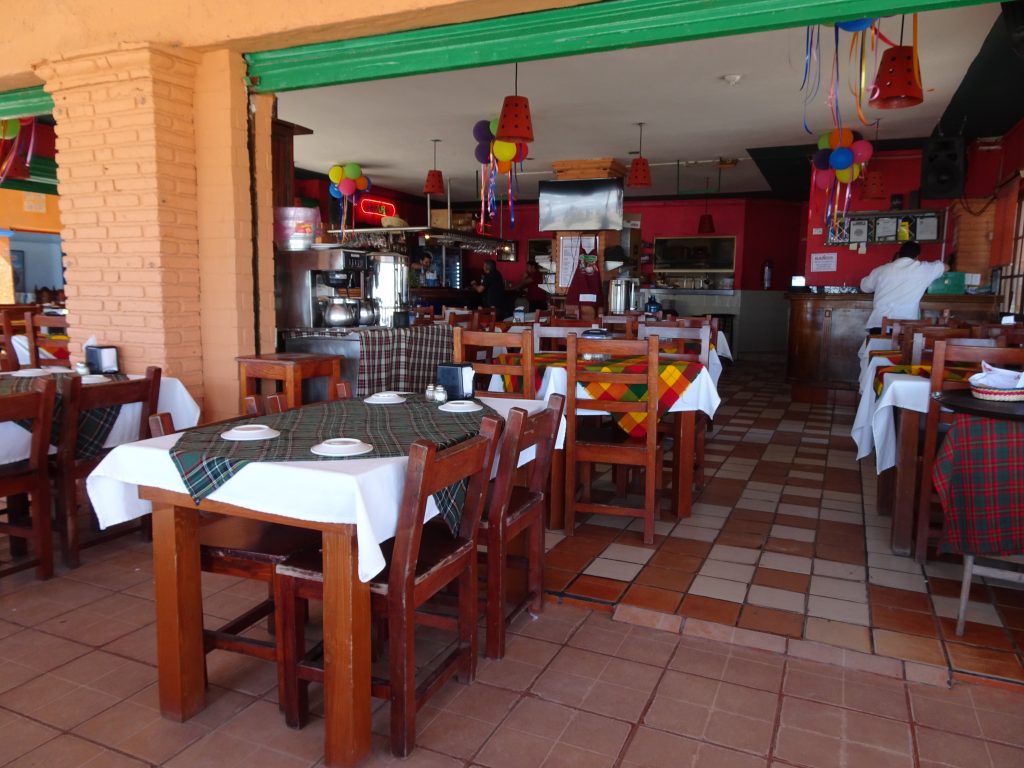 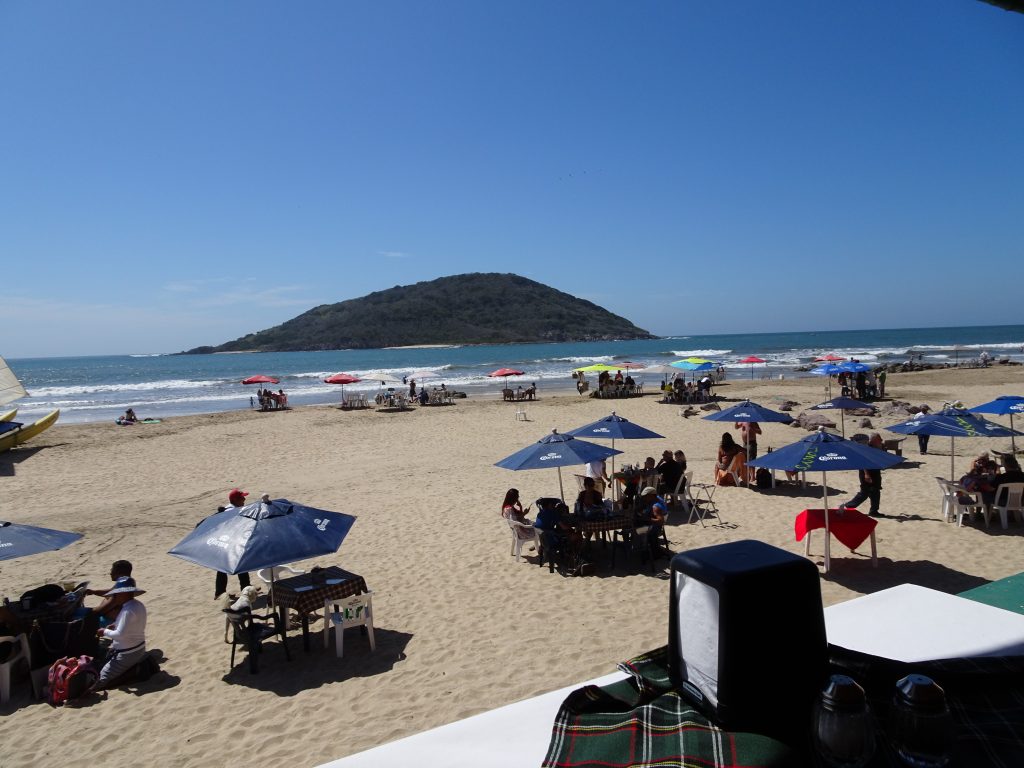 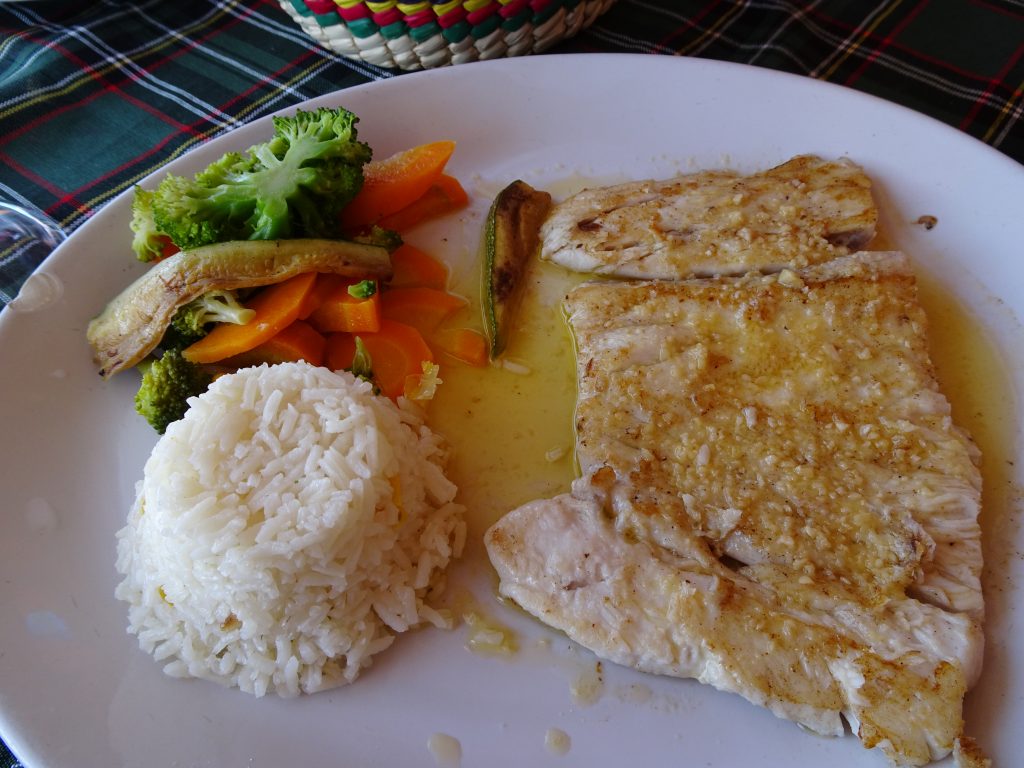 After a very long lunch, we flagged down another pulmonia and began winding our way back to the cruise port, making many detours around the parade (which wasn't even beginning until sunset!).

So many vendors were already set-up to sell cotton candy, balloons, toys, food and drinks. We must have seen 100 beer stands. Everything was very colorful and girls were arriving in costume to ride on the floats. 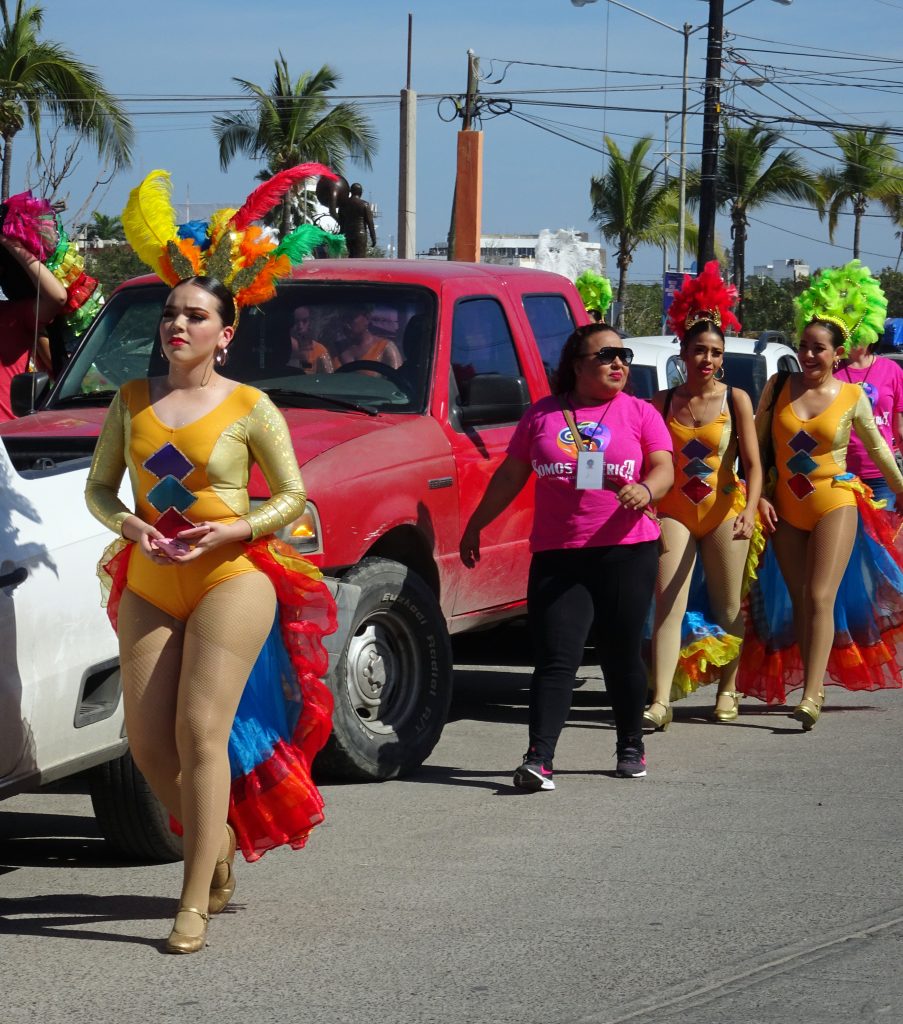 Upon reaching our ship, passengers find themselves in another mass of people - thousands of cruise passengers finding their way back to their cabins - amid hundreds of "craft" stalls set-up between the taxi stand and the ships. Princess passengers are greeted with icy-cold wet face cloths, and icy cold water, for a refresh.

Another fun evening on ship. but not as fun as usual. We were tired and didn't go to a show after dinner. After a cocktail, we had light meals in the Concerto dining room and called it a night. 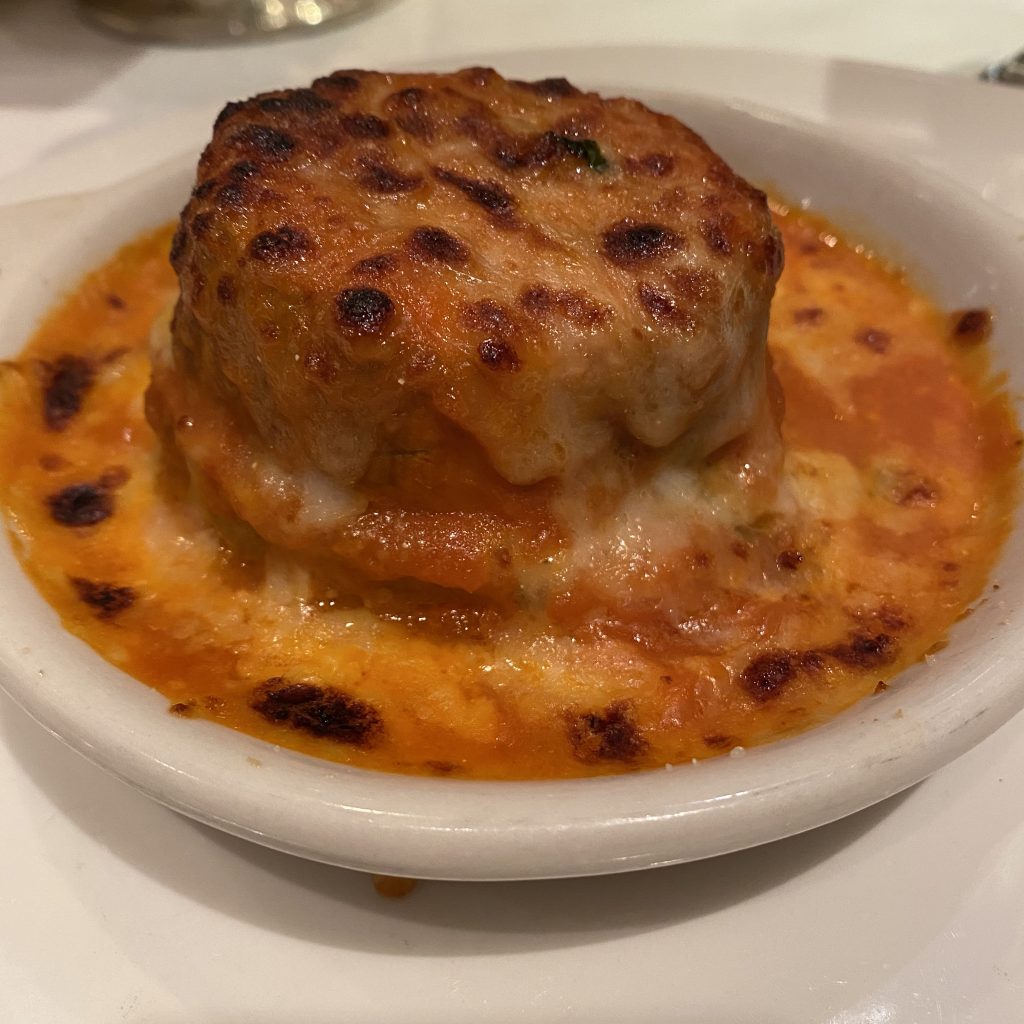 I had an appetizer that was a one-person sized eggplant parmesean. 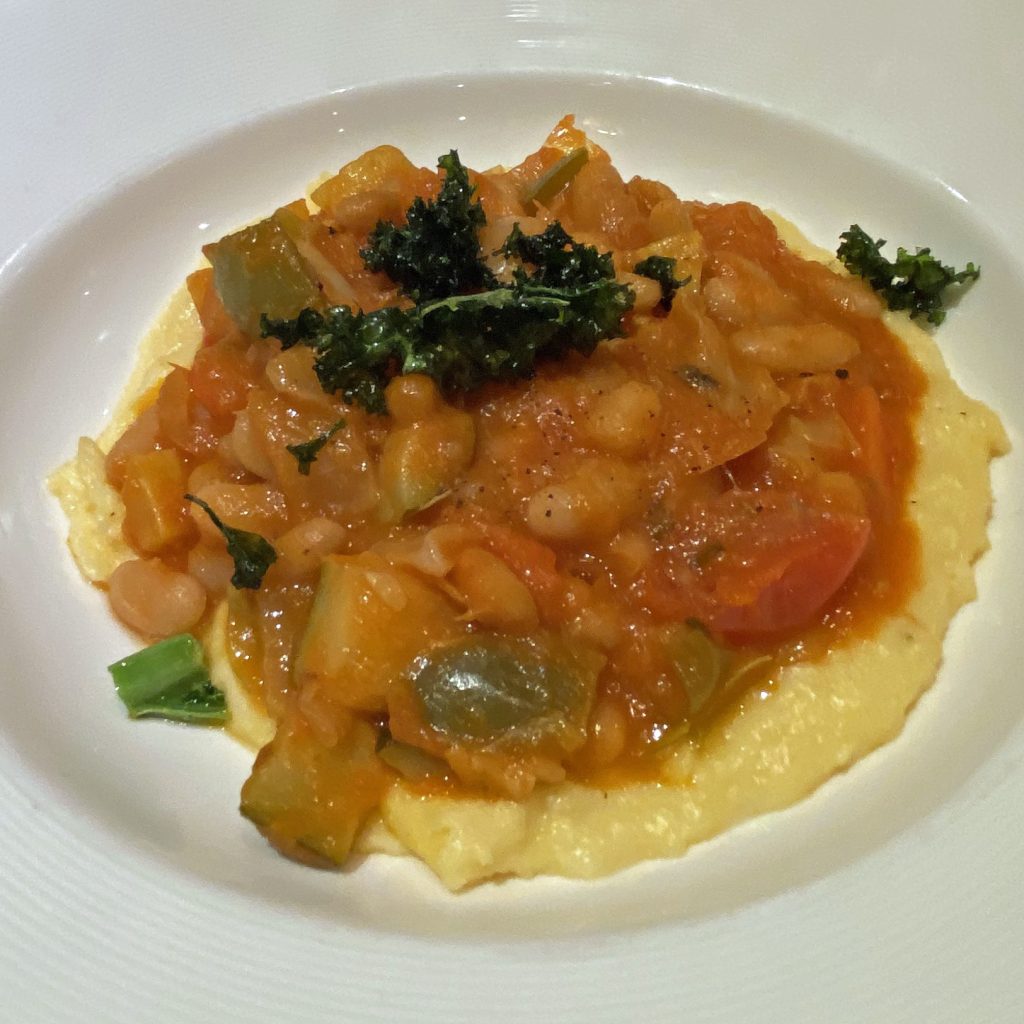 DT had cannellini beans and vegetables over creamy polenta.

It was wonderful to re-visit Mazatlan, we had a very nice day in the city, and I was well-over 10,000 steps on my pedometer. Until my next update, from Puerto Vallarta, I remain, your sleeping correspondent.