Indio, California:  DT celebrated his (actual) birthday today. After waking and completing the New York Times crossword, he went on a bike ride. Then his mommy phoned to sing Happy Birthday!

We had a tee time at Indian Springs Golf Club with Marci and Jim for 18 holes. The temperatures were in the low 90's and there was no wind (after nothing but wind for the past two days and nights). 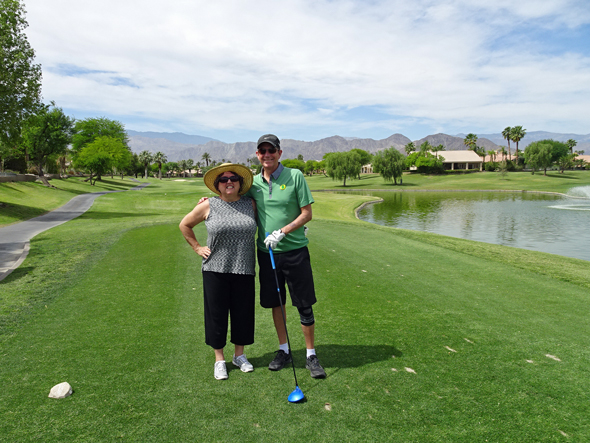 Dave played well and I... and let's just say I played weller... shooting 134. We finished at one o'clock and had lunch with Marci and Jim at the new Big Rock Pub at the golf course.

Knee Update: In the above photo, you may notice DT is wearing a knee brace. Since his surgery (torn meniscus repair; 30% removed) two months ago, he has been rehabbing, icing and continues to have post-op check-ups with his surgeon. He can ride a bike or exercise bike for hours, but he still can't run. This is a bit disappointing (because he is a runner!), but is promised to a runner once a again in a few more weeks. Walking long distances is still difficult (the zoo and safari park a few weeks ago were tough). He does not wear the sleeve daily, just when his knee needs a little extra protection.

His day continued with more excitement: a nap, a swim, a dip in the hot tub, Leo and Lucy facetimed with Bubba to sing Happy Birthday, family and friends called from around the world to wish him well on his birthday, we had dinner at Castelli's (just the two of us) and ended the night at a party held by one of our neighbors at the Motorcoach Country Club!

Happy Birthday to the BHE!