In just a few hours, we will begin our Southern Migration. Like most Ducks (feathered or not), we are flocking south for the winter. Seriously, with thousands and thousands of Oregonians heading to Phoenix for the BCS Championship game, it is nearly like traveling in a flock. If you are on Interstate 5 in the next few weeks, you will swear Oregon Ducks travel in formation.

Look what I found in our driveway Saturday morning: 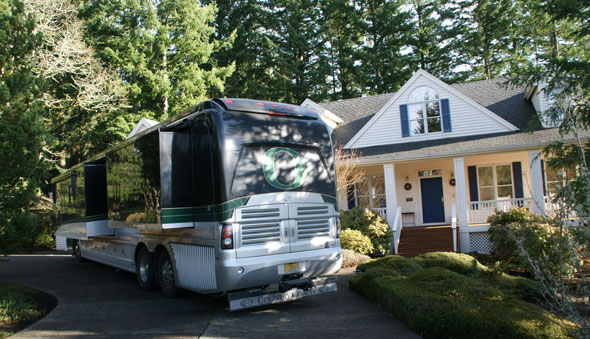 I just love a photo of our RV in our driveway - both houses in one photo!

Notice the sunshine? This photo is deceiving. It was 37 degrees. Still, it is certainly more pleasant to load the RV in the sunshine than in the rain Oregon usually experiences November though June in December.

By late afternoon, everything was in place and we are pretty-much ready to leave tomorrow.

Which is a good thing, because just as the sun set - it started to snow.

Until my next update, I remain, your "I hope it doesn't stick" correspondent.

« Call Me a Duck (with tickets) Mental Floss »