Portland, Oregon: Y’all know I have a problem with cookbooks. I just love to read them, try the recipes, collect the books, and generally am obsessed with foods and their preparation. Nothing like snuggling-up with a cup of tea and a new cookbook. Luckily, across the table from me sits a man who exercises for hours every day and enjoys eating. (Pay no mind to the old fat lady sitting across from him.)

My “problem” started in college, where I acquired the Vegetarian Gothic, by Mo Willett (1975). This hand-written, hand-illustrated, classic paperback now seems to be the most valuable book in my collection. Who knew? We fancied ourselves gourmet while munching on alfalfa sprouts – which we sprouted ourselves, of course. My little cookbook collection slowly began to grow, though I had to be thoughtful as we moved internationally a few times during the 1980s… to a place where, no, you could not find fresh cheese, nor even an avocado. I learned to cook and enjoy Filipino foods in Manila and (next transfer!) Taiwanese foods during our Asian years… however my copy of Julia Child’s Mastering the Art of French Cooking has the price written in Taiwan dollars, so I must have made an attempt at French cooking in Taiwan, or maybe was just studying? Can’t recall. At all.

But then we returned to Oregon and the serious acquisition of cookbooks began, culminating 30 years later in an entire wall of bookshelves in our kitchen dinette… which over-flowed to a bookcase in my office. When the kitchen was remodeled in 2008, the first purge occurred. Fifty books were sold or given away.

Then we decided to downsize. 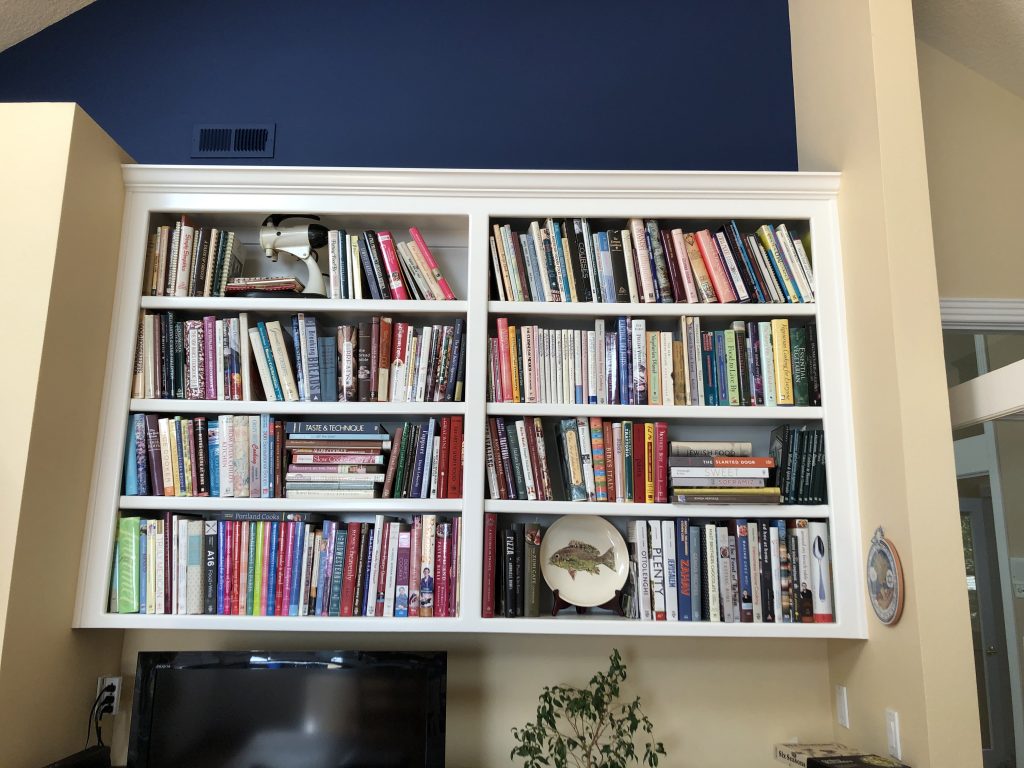 This is the before photo. It does not include the reference books, Jewish cookbooks, or “general compilation” books from my office bookshelves. Going all Marie Kondo, I gathered every cookbook in the house, and stacked them according to genre on the large dinette table. 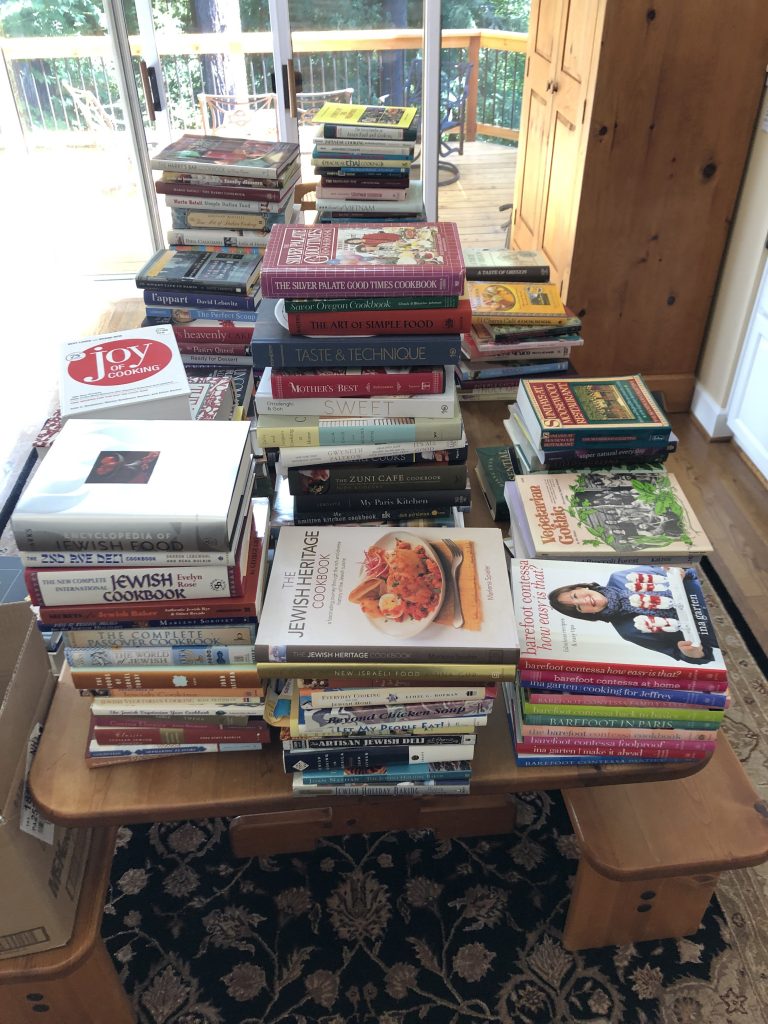 There were 299 cookbooks in our house. This was going to be quite a project, and it took two full days to sort and catalog (Excel spreadsheet, people!). As I looked through each book, decisions (joy sparking?) were made. Keep. Recycle. Give away (I have a local source that will take every cookbook I offer).  There are now 194 cookbooks in my collection. Purge a Third!

The “keepers” were cataloged and stacked. Not surprising to anyone, my largest collection (after sorting!) are Italian cookbooks (22 total), and also 22 Jewish cookbooks. Winner, winner, roast chicken dinner! I own every single book by The Barefoot Contessa. Her recipes never fail, and Ina Garten is my straight-haired doppelganger.

Finished categories were then transferred to the dining room, where DT protected the buffet top with newsprint, and helped me move the cookbooks before they were boxed up. 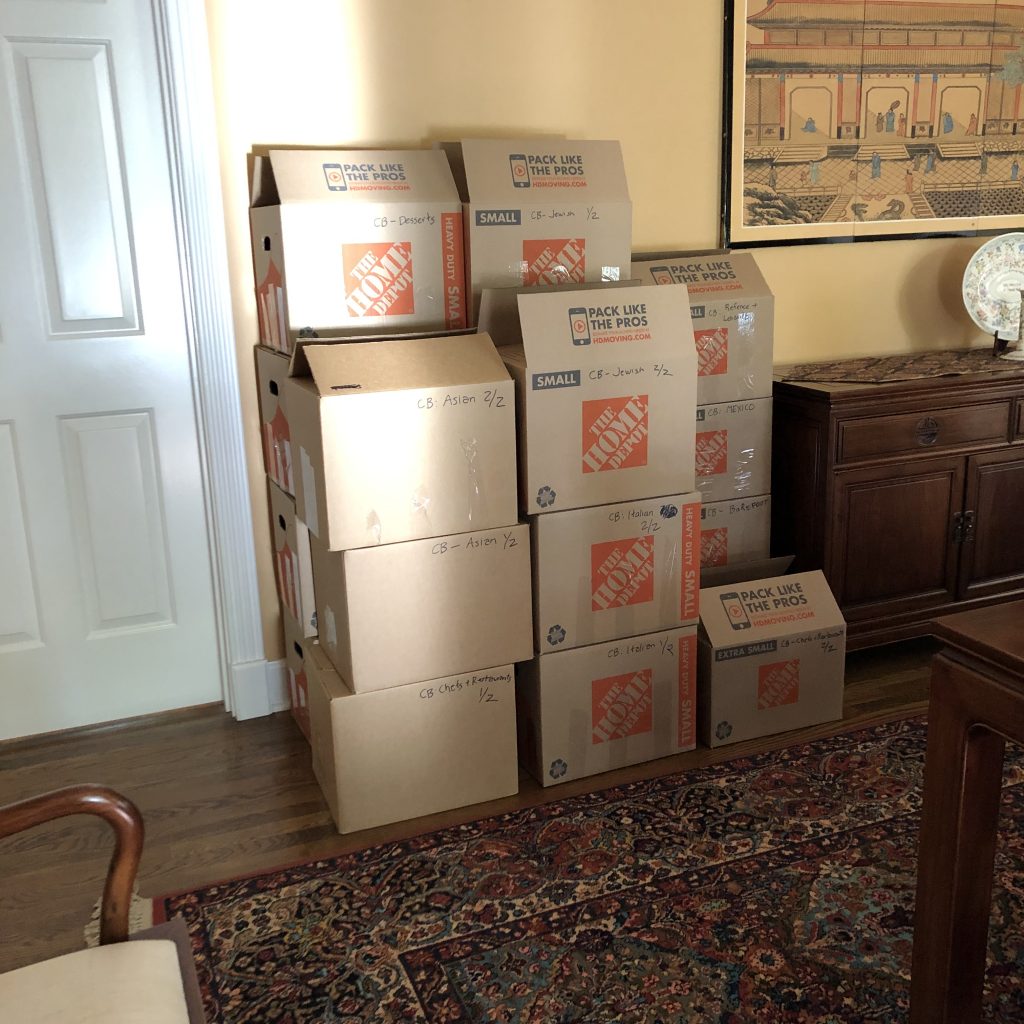 Yes. We are moving!

If we are truly committed to down-sizing, we need to sell this monster of a house we rarely visit. We are moving out, having the house staged, put it on the market, and hit the road. We do not know where we are moving, except into our motorcoach until we decide. You can guess our new home will be much smaller and much closer to Leo and Lucy than Portland.

Our furnishings (and my 194 cookbooks) will be stored until we tell the moving company where to deliver our things. Because we have a motorhome, we have no deadline. We have our place in Indio at the Motorcoach Country Club as a home base/address for the time-being.

I said there was going to be a big announcement! 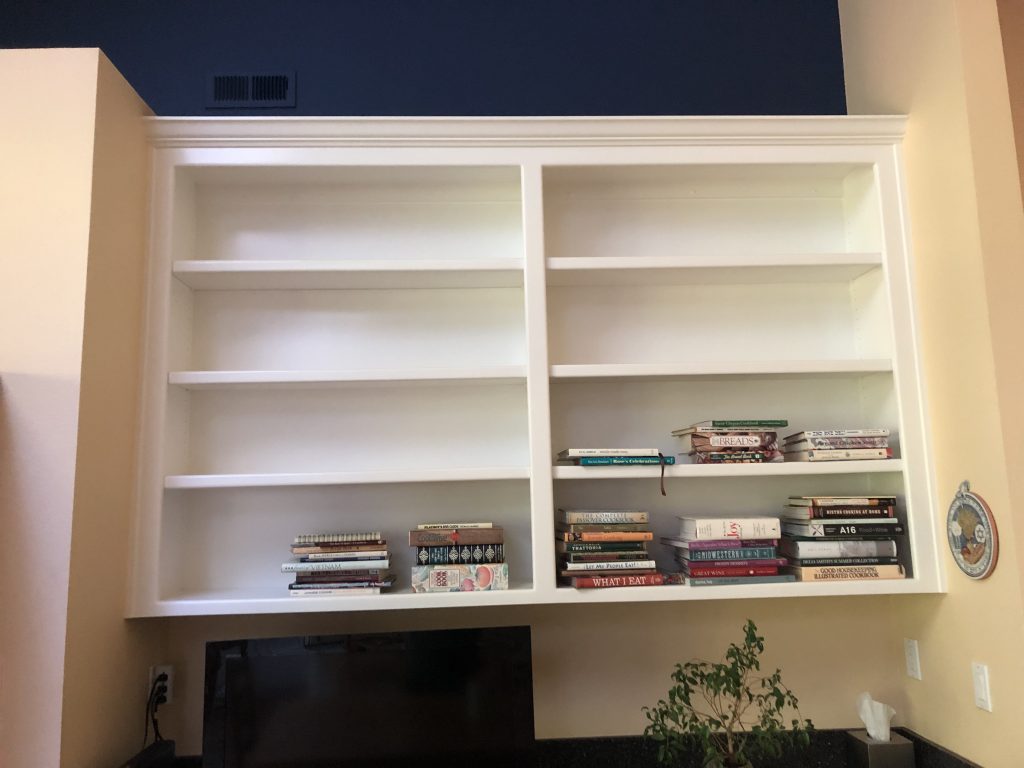 I left a few discarded books for the real estate stager to play with. Stunt cookbooks.

Let me urge you all again to clean out those closets, empty the shelves in the garage. Do you still have boxes of stuff in the attic? Get your photos scanned. Don’t make your kids go through your cookbooks. (If only someone would have told me this thirty years ago.)

The hall closet is empty. The bookshelves in my office are empty. It is the most wonderful and freeing feeling.

Until my next update, I remain, your moving correspondent.