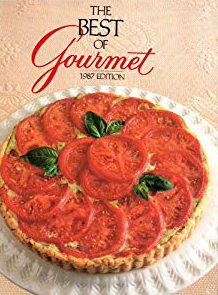 Portland, Oregon: Over last weekend, while sorting and cataloging 190+ cookbooks, I found (okay, actually DT went all Columbus for me) The Best of Gourmet 1987 cookbook, which had been missing for more than 20 years. I owned the complete series – around 15 or so – huge coffee-table-worthy volumes, and had recently passed them on to a collector, sadly apologizing for the missing 1987.

I knew why that particular year was missing from the set. It held a recipe I made many times for luncheons and/or mah jongg sessions in Taipei. The Best of Gourmet 1987 must have been pulled from the shelf (in a closet under the stairs) years ago while looking for this recipe after we moved back to Oregon, and never returned to the set.  It was an easy recipe, consisting of poaching chicken breasts in water with lemons and basil, and the chicken was left in the basil water overnight in the fridge. The chicken was then sliced and attractively placed on a platter with a dressed salad of baby tomatoes, fresh basil, and smoked mozzarella. This is a super delicious salad, and I remember it well. The recipe was scanned a few days ago, so now the book can be sent to join her sisters.

But there is a big puzzle with this recipe. There is no way on earth there was such a thing as smoked mozzarella in Taipei in 1987. There wasn’t even plain mozzarella, as there was rarely cheese… unless it came from Kraft foods, via a  factory in Manila, and did not require refrigeration (i.e. Velveeta). I recall using smoked Gouda in the recipe, but where would I find smoked Gouda? And a steady supply of smoked Gouda because I must have made this dish ten times in three years. Did I ask our Dutch neighbors to please bring smoked Gouda from their home visits? Who knows? Anyway, I am going to put this on the menu soon and report back.

In the meantime, I found so many delightful things in the 1987 cookbook. Even the smoked mozzarella called for in the salad recipe had that still-common-in-recipes-today notation: available at specialty shops and some supermarkets. There were other specialized ingredients needed in the cookbook, such as Oriental sesame oil, avocados (preferably from California), balsamic vinegar, and extra-virgin olive oil. (I think most of these ingredients are now available at 7-11?) Arugula was always in italics. Cilantro was always called coriander. Several recipes called for candied violets – like they were commonly available at every Winn-Dixie.?

There were recipes for flambéed grapes, all sorts of fruit fools (prune, banana, apricot and strawberry, all whirled together with whipped cream and a dash of balsamic vinegar), even a few tofu recipes… and you won’t have to use your imagination as to where one could procure tofu in America in the 80’s…. you guessed it: specialty shops, Oriental grocers, and some supermarkets.

I had no trouble finding tofu in Taiwan. (Pronounced DOE-foo in Chinese, by the way.)

The cocktail recipes were interesting, and I think a sake martini is still a thing, right? One teaspoon sake (really; what’s the point?), 2 ounces vodka, shaken, and served with a cucumber ball in the bottom of the glass. I think Lenny would like one. A white wine spritzer – white wine with soda water and a lemon twist – should have been named the American Expat. That’s what we drank in Taiwan because the wine (imported from various bad-wine-producing-countries-that-also-recognized-Taiwan-as-a-country-for-trade) was so bad. There was a beer problem as well. Until 1988, the government had a monopoly on beer, with only one brand available in the entire country – Taiwan Beer – and it contained formaldehyde. These were desperate times.

There were very questionable snack mix combinations calling for nuts, oyster crackers and Fritos in the cookbook. Except for fresh parsley and basil, nearly every herb required were dried. For Christmas, you could spread cream cheese on white bread, cover the cream cheese with thin sheets of lox, and use a Christmas tree cookie cutter to punch-out fancy holiday hors d’oeuvres!

The planned menus were also full of questions. Did everyone in the states in the 80s have a live-in cook and full kitchen staff? How else could anyone pull-off a romantic “terrace dinner for two” consisting of eight dishes? Or an Anniversary dinner for two with seven dishes in three courses? Don’t forget each course had a cocktail or wine pairing. Having weekend guests to your country estate in the autumn? No problem, Gourmet has the meal planning figured out! Saturday lunch and dinner, 6 dishes each, followed by a brunch Sunday with bread pudding and sausage patties. At least the brunch sounded do-able as bread pudding needs to be made the night before… until I noticed watermelon-lime daiquiris were also served at the brunch… making your guests completely unable to drive back to the city and… oops, I forgot your fancy friends have chauffeurs. But, of course.

But really, is a watermelon-lime daiquiri a good choice for an autumn menu? I think not.

Happily things have changed and our world is now so small and we have an abundance of foods and wines from every corner of the globe at any time of year. Just a few years ago, I spotted fresh mozzarella in a grocery store in Taipei – and fine European and American wines.

I hope you have enjoyed my review of The Best of Gourmet 1987 cookbook. Don’t rush out and buy a copy, but when I make the chicken salad, the recipe will be posted and photographed. It’s a keeper.