The Happiest Place on Earth:  Another wonderful day with Our Family. Perfect weather again and we had so much fun. We even found a few things to entertain Little Lucy.

Up and running early for our 7:10a (!) reservation for breakfast with Chip and Dale. Goodness. 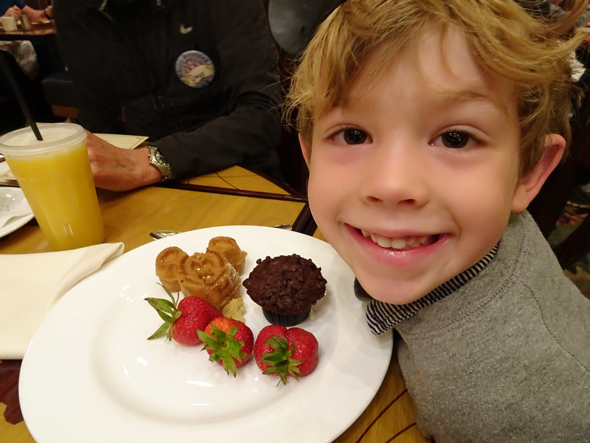 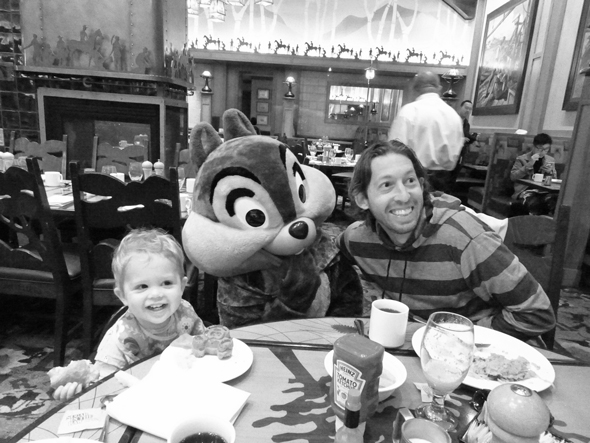 Chip, posing with Lucy and Lenny 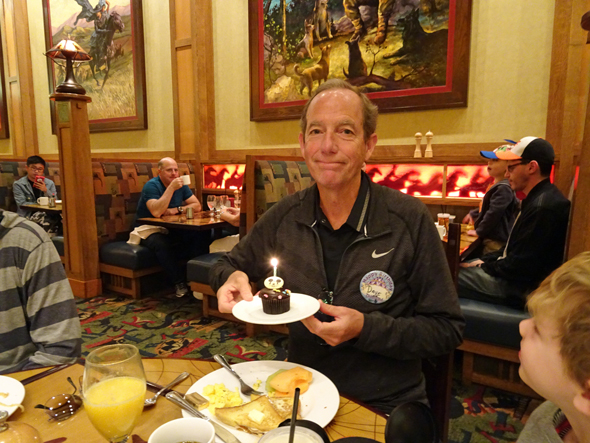 DT has been sporting his "It's My Birthday" button for two days. Every Disney employee/cast member he has met has said "Happy Birthday, Dave" and every restaurant we patronize has brought him a dessert with a candle on top and sang Happy Birthday! Even at breakfast. 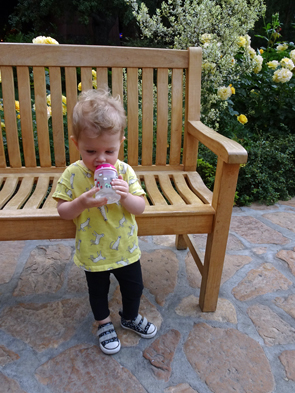 Dale, posing with the kids

FYI: The characters were created for Disney in 1947 and their name is pun from the famous furniture designer, Thomas Chippendale. Can't tell them apart? Chip has a small black nose (it looks a bit like a chocolate "chip"). Dale has a big red nose. 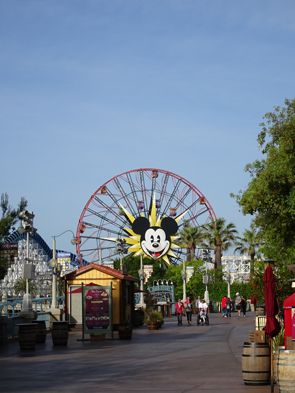 Again, because we stayed at a Disney hotel, we were allowed into the park one hour before it opens to the public. Today that meant 8a, and there is no need to even look at your watch to learn when it is 9a. At 9a there is a sea of people instantly filling the park.

Our first stop was to the area devoted to the Disney Cars movies, Cars Land. 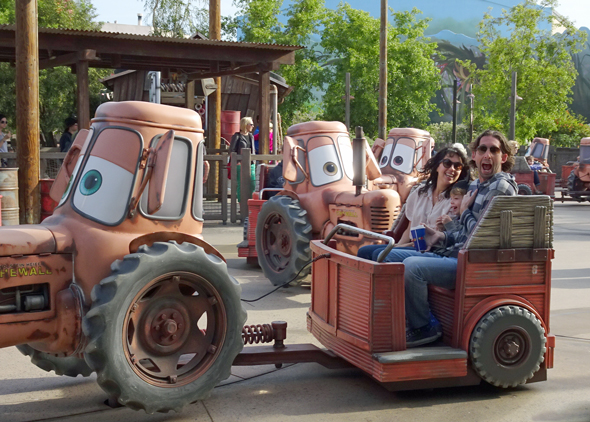 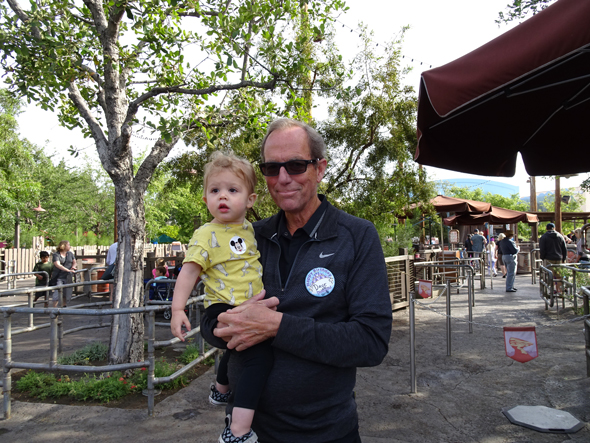 Lucy was too short to ride, so we waited with her 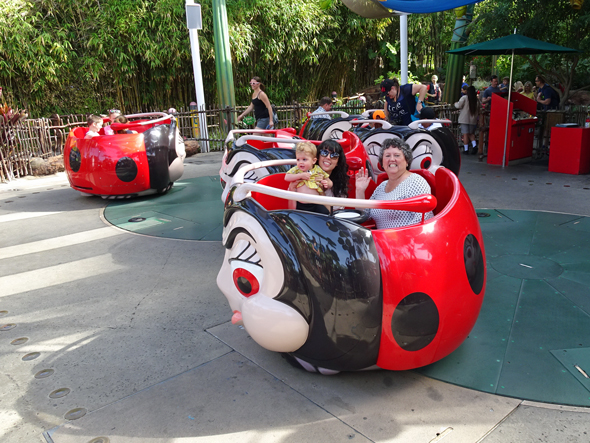 But over in Bug Land, we found a ride with no height requirement, so Lucy and I could both ride! 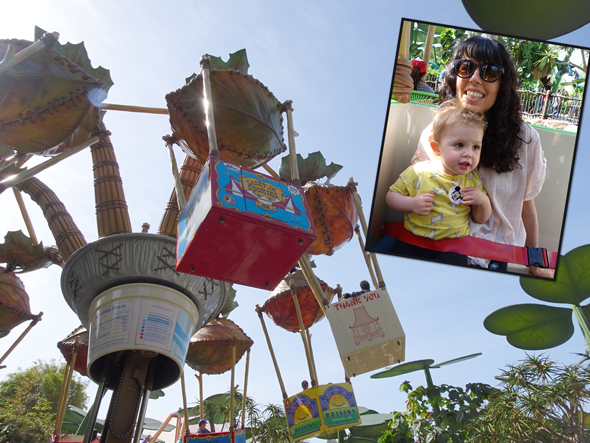 Lucy, Lisa and I also rode Flik's Flyer - hot air balloons made of "leaves". Lucy gets a very serious face while on these rides. We think she is just confused because she can't see out of most of the conveyances... but we are not sure... and Lucy can't tell us. 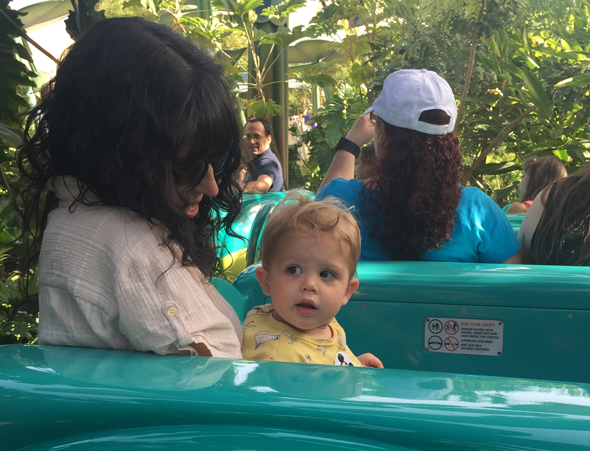 Lucy could see out of Heimlich's Chew Chew - a caterpillar with a very bad German accent eating his way through fruits and vegetables. Lucy is so easy-going. She even amuses herself while waiting in line by making friends with other little kids.

We continued through the park in a circular pattern, riding anything that looked good and anything that didn't have a crazy-long line. Most of the rides for tots had five minute waits, so sometimes Lucy and I rode the same ride twice. Why not? 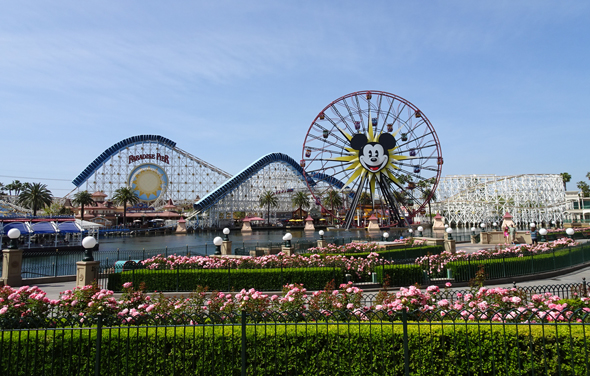 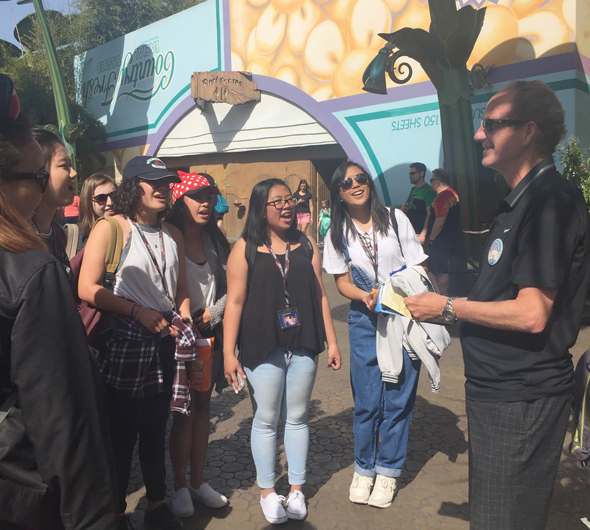 Randomly, while standing outside the restroom (waiting for me) a high school girls a cappella choir sang Happy Birthday to DT. Lisa snapped this photo on her phone. Everyone just loves DT!

The kids love carousels, so we all rode the sea-creature-inspired King Titan's Carousel on Paradise Pier 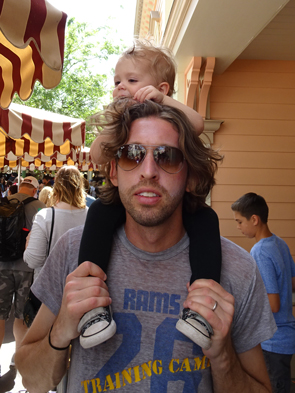 Lucy has the best view in Disney 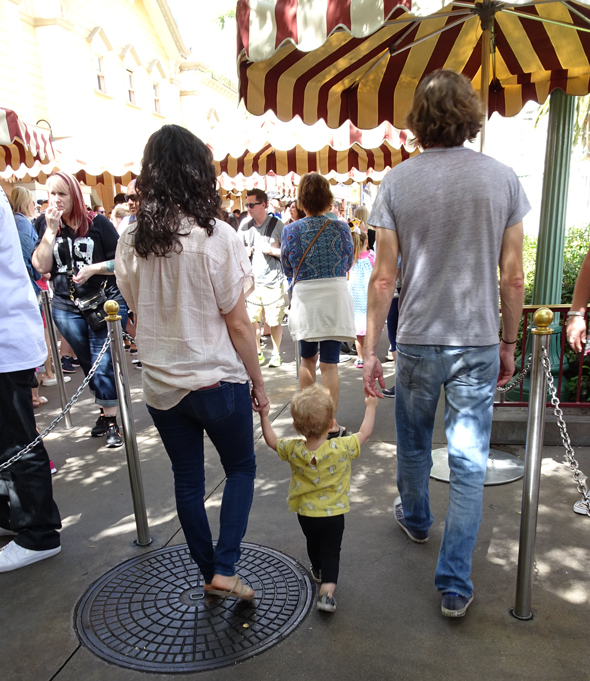 Continuing around the "pier", Dave and Leo rode up and down at Jumpin' Jellyfish: 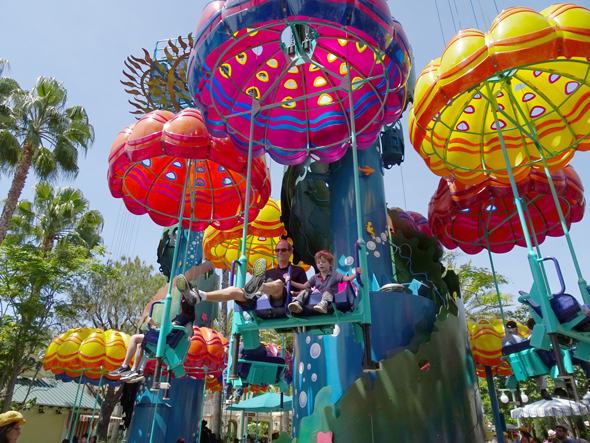 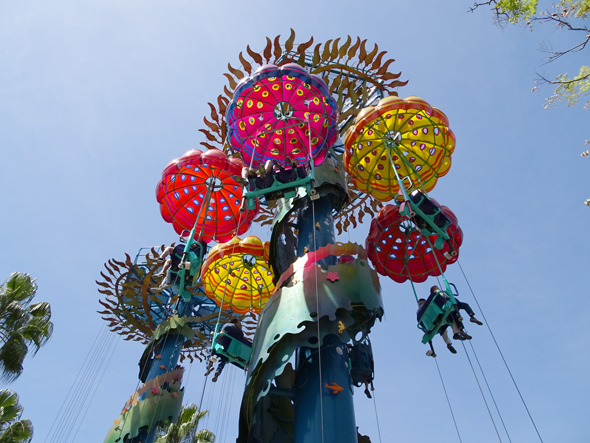 Leo is so brave 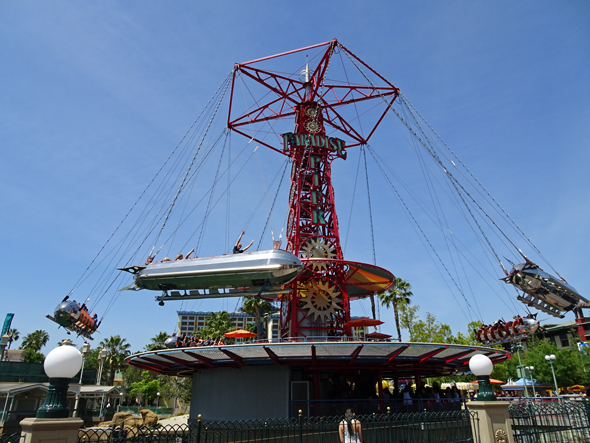 Everyone (but your trusty photographer) was brave enough to ride on a bullet-shaped torpedo suspended by thin wires. Lucy rode, but could not see out. Probably traumatized for life. 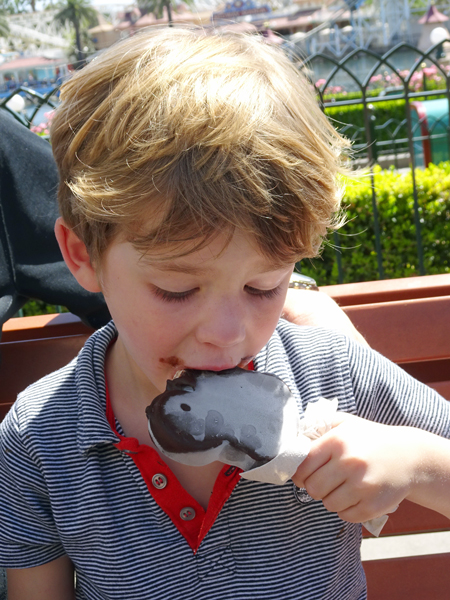 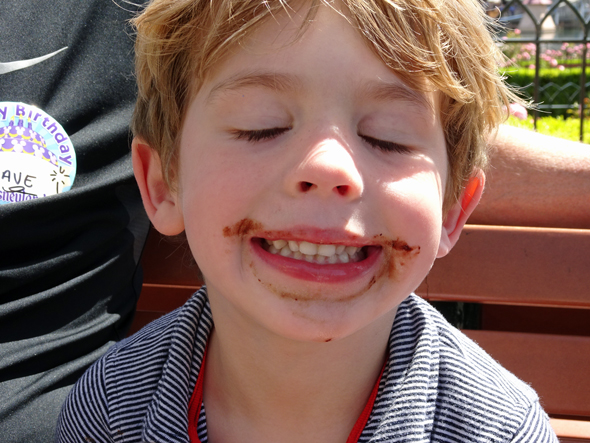 I'm just crazy for this kid 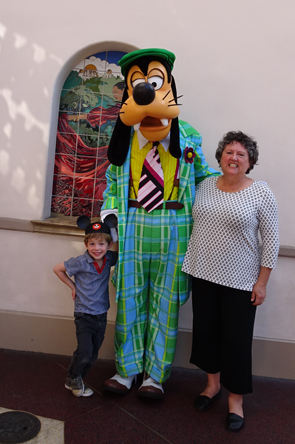 We posed with Goofy

At nearly 6p, we went all the way back to Cars Land to ride Radiator Springs Racers (using a fast-pass ticket) - slick convertibles racing on a track through beautiful red rock cliffs and canyons. It was like a roller coaster, but I took it like a NASCAR champion. Yeah, Bubbe!

Back at the hotel, it was grilled cheese sandwiches for the kids and then they all drove home to Los Angeles. Dave and I strolled around Downtown Disney and finally found a little table for two at an outdoor cafe and had ourselves a quiet meal. We were exhausted. Over ten miles on my pedometer today. 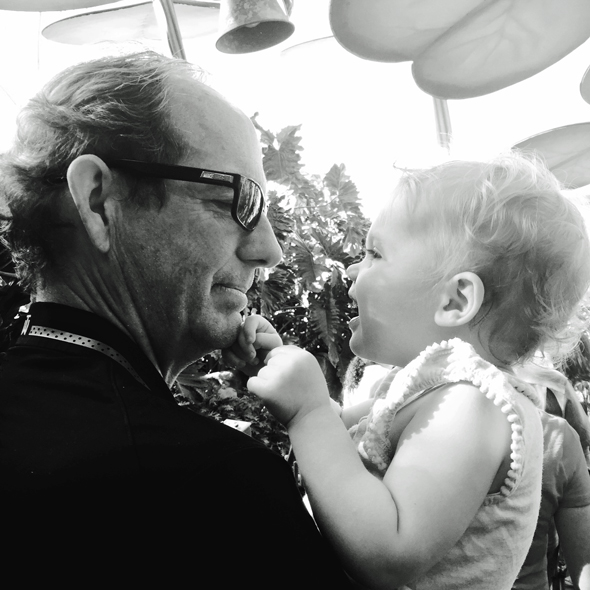 Just a lovely three days spent with the kids. So many memories and so many good stories to tell for years.