Tubac, Arizona: I won't even give my usual weather report, as I am afraid of alienating you, Dear Freezing Readers.

This morning we had a tee-time at the Tubac Golf Club - a golf resort, hotel, spa and housing community, all in one. The resort scene is very pretty, but today the joint was a zoo because of a car show! 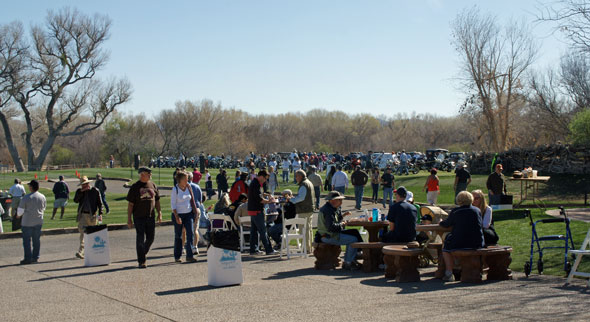 The parking lot was full and the golf course had temporary food booths set-up all over. But after we teed-off, the car show crowd did not interfere with our golf.

We will have to blame our bad swings on something else. 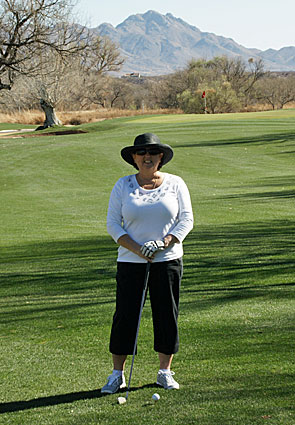 Have you missed us? I haven't posted a photo of either of us in days. Aren't we just a cute couple of old duffers? 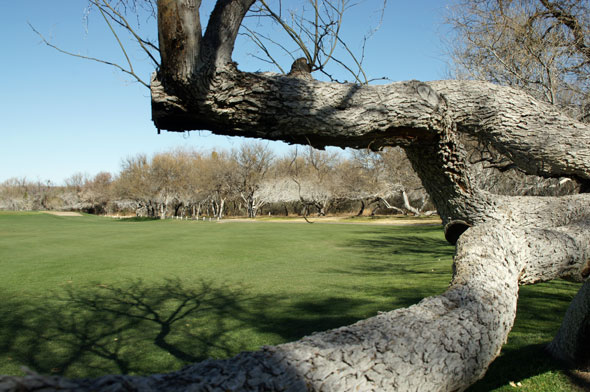 Tubac Golf Club has 27 holes. One nine was used to display the classic cars at the show. We played the Otero, then the Rancho course. The leafless trees are a bit spooky-looking. I think Tim Burton should make a movie here.

But Tin Cup was filmed on this hole in 1996! Yet again, another future Jeopardyanswer, courtesy of RVGoddess.com.

Tubac was a very interesting and a deceptively-difficult course. At one point on the Rancho course, golfers enter the "Tubac Triangle" - three very difficult holes in a row! The 8th hole is so tricky - and so long - it is called a trainwreck.

See? I told you! Luckily DT was playing the blue tees, or we would still be there. Many interesting hazards on the Tubac Golf Club course - some on a tee box! 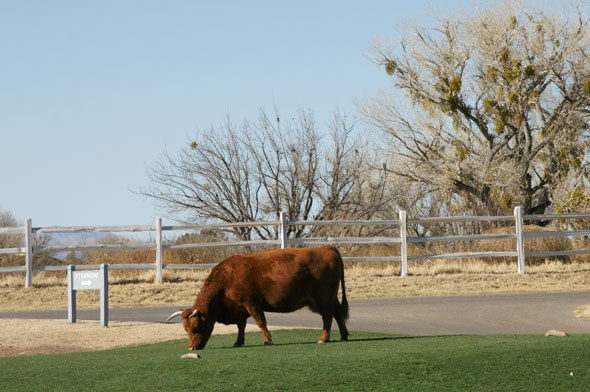 And that's no bull.

You may have asked yourself why we have not been golfing for the past few weeks? (What? You haven't?) Remember two weeks ago when I sliced the tip of my thumb off while mincing shallots in Benson, Arizona? (You forgot, didn't you? Admit it!) The thumb has been without a bandage for only the past three days. It was a gruesome, disgusting injury. After the "glue" has faded away, I am most upset the doctor did not put a few stitches in the gash instead of that stupid derma-glue. I am not a doctor (and I have never played one on TV), but I tell you - my gash needed stitches. If the doctor had put in three or four stitches, the wound would have healed by now. As it is - two weeks after the injury, I have an opening the size of the Grand Canyon on the tip of my thumb. I am happy to report, there is no infection and in another week, I am fairly sure no one will be able to tell I have very sharp knives... but that is why we have not been golfing.

The De Anza RV Resort was holding a special Prime Rib dinner tonight. $12.95 for a large cut or $9.95 for a smaller portion. Bring Your Own Booze. Dinner was from 5p to 8p. We watched the Ducks lose to Cal (basketball) and then headed over to the beef-o-rama.

We arrived to the Prime Rib dinner before 6:30 and they were sold out.

DT and I headed one mile north on the frontage road to the Amado Territory Steakhouse. Attached to a small inn, the steakhouse is one of the old-fashioned steakhouses that serves a steak on a platter with a baked potato wrapped in foil and a salad on the side. All included in one price. Isn't it interesting that the Amado Territory Steakhouse was also sold-out of prime rib??

Our server, David, was good. Our food was good - but again, too much food. We are not wimps. We exercise a lot. We golfed 18 holes and did not eat anything more than a banana and a granola bar. We were HUNGRY. After the salad, the yummy molasses bread and few bites of steak - we were pretty-much over. 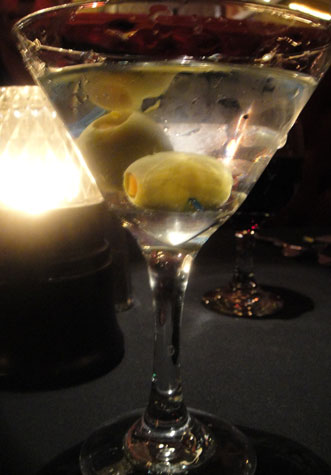 Margarita photo of the day is of a martini. And by a martini - I mean a real martini. 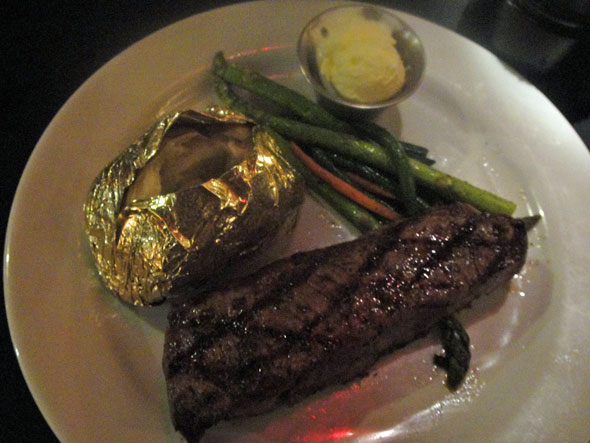 Sorry for these photos - it was nearly totally dark in the steakhouse - but this is a 10 oz New York Strip steak. All but one inch of this hunk-o-meat is now in our refrigerator. DT had a rib eye. Same story with him. In the RV refrigerator.

Until my next update, I remain, your over-par correspondent.