One of Portland's new hot restaurants was named one of the Best New Restaurants in America by the editors of Bon Appetitmagazine! Luce (pronounced LOO-chay) serves simple home-style Italian fare out of an old grocery store. Cute! Portland is really becoming famous as a foodie town. The more the merrier, I say. The September 2012 Bon Appetit featured several recipes from Luce, so I decided to try their Braised Chicken with Capers and Parsley. Of course, it would have been much more fun to actually go to Luce and let them cook it for us - but after this new-found publicity, I don't suppose there is much chance of scoring a table for a while - and they do not accept reservations.

The recipe is very simple - saute an onion, brown chicken pieces, then braise it all together with capers, parsley, chicken stock and vinegar. Just a few moments of prep work, then just over an hour on a low simmer and dinner is served. I love to prepare this type of make-ahead dish because I am so lazy for a dinner party.

Don't faint, but I followed the recipe exactly. I even used two pounds of chicken. 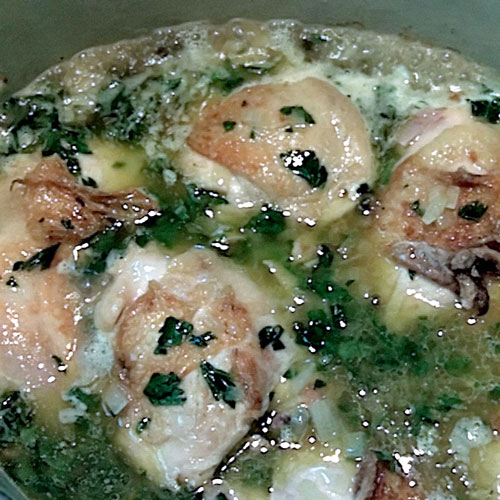 After sauteing the onion and browning the chicken, I added the capers, parsley, chicken stock and vinegar. All I had to do was let it simmer for 75 minutes. 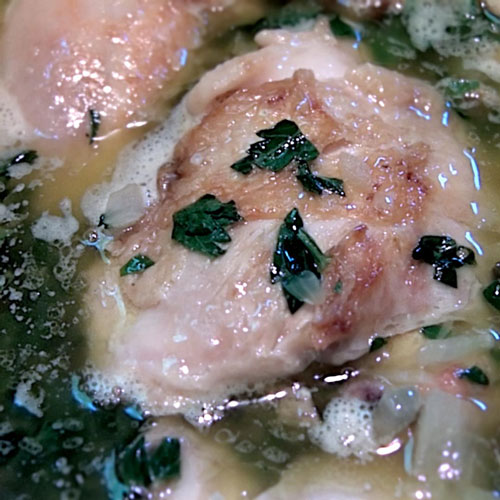 The chicken smelled so good and I was so hungry - it was 75 minutes of torture. 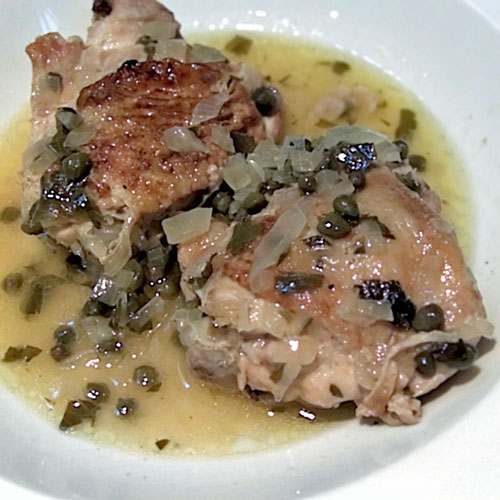 The recipe said to simmer the chicken until it is ready to fall off the bone. Seriously, my chicken thighs did not require a knife. But of course, I used a knife, because I'm real classy like that and stuff... though I think I was virtually shoveling the moist morsels into my mouth as fast as I could chew!

Which wasn't very classy at all!

Interesting thing about the recipe? It calls for soaking/rinsing the capers several times, which I initiated before even chopping the onion. This reduces the saltiness of the capers. Though the chicken is sprinkled with Kosher salt before browning, the recipe also calls for low-sodium chicken stock. (FYI: I always use low-sodium stocks. First, many purchased stocks/broths are usually far too salty to be even healthy, and by using a non-salty stock, the cook can control the salt.) Which was a bit interesting, because I thought my chicken could have used a little more salt!

Also - though Luce is an Italian restaurant, this dish seemed very French to me.

All-in-all, a very tasty and inexpensive dish - and one you may wish to try.

Until my next update, I remain, your low-sodium correspondent.