We spend the summer in Oregon, not far from the City of Portland - home to countless fabulous restaurants, museums, galleries, theaters, gardens and hundreds of interesting shops filled with tax-free goods. Do we ever venture to the Big City? Once or twice a month. (I must clarify this statement to read: we travel to Portland once or twice a month together; DT makes the drive often for meetings.)

If you may recall, My Driver celebrated a Big Birthday in April. Extending his special day into July, I surprised him with tickets to An Evening with Anthony Bourdain in Portland. The night would include a nice dinner at one of his favorite restaurants and an overnight at the hotel next to the theater. No driving. Just drinking.

I bought the tickets way-way back, maybe in March. About two days after the (still a surprise) tickets were ordered, DT informed me that he no longer enjoyed Bourdain: "He's just over-the-top, rants on and on..." So I spilled the beans and told him about my gift for his birthday. He was a trooper and said he would go!

Plans made in March my take a twist by July. My Dad asked to meet us in Portland for lunch today, so we packed an overnight bag and headed downtown early. We had a great lunch with my sister, my Dad and Mary. They were driving through Portland on their way to Seattle. 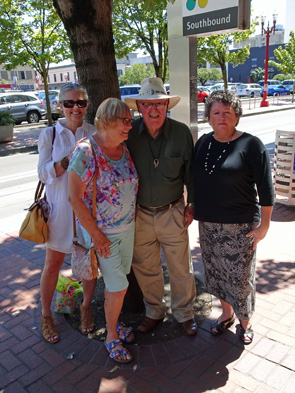 Looking good! We had an early light lunch at The Davis Street Tavern and caught-up with Dad and Mary.

Next, DT had to visit the TrackTownUSA crew as they were in Pioneer Courthouse Square promoting the World Indoor Track & Field Championships (to be held in Portland in March 2016). The team had set up a shot put ring and were encouraging passers-by to attempt to throw a 16 pound metal ball. What could go wrong? Nothing! The event was a huge success.

After the equipment had been removed and the TrackTownUSA crew were headed back to Eugene, we checked into our reserved room at The Heathman Hotel. Things were a bit confusing as a large crowd had gathered at the front of hotel. I realized they were fans gathered to spot a visiting celebrity and assumed they were waiting for Anthony Bourdain to appear through the hotel doors. (Mr. Bourdain's show was at the theater next door to the hotel.) However - and I'm no detective - upon closer view, my little brain decided the gathered fans didn't exactly fit the description of someone into food and travel writers. I cannot tell you if Anthony Bourdain stayed at The Heathman Hotel tonight, but Aerosmith did!

Here is our conversation after we figured out the crowd were waiting for Aerosmith:

(All the while I am googling "Arrowsmith" on my phone.) Though DT must live with a cultural infidel, my ignorance was quickly forgotten when the hotel mysteriously upgraded us to a fancy corner two-bathroom suite with a great view of downtown Portland. 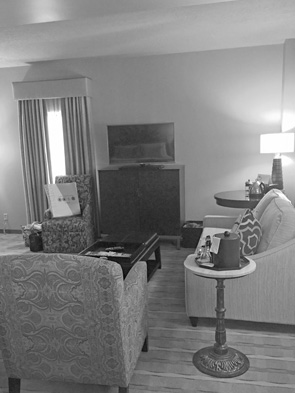 Nordstrom is just a few blocks from the hotel and they are at the tail-end of their Anniversary Sale, so we strolled around the department store and also had a look through the Columbia Sportswear flagship store, before meeting Dave's cousin Jim, and Jim's wife, Nancy, for dinner at Higgins.

Pay attention! All of this has happened in only one day and it is only cocktail time - and it has all happened within a few-block area of downtown Portland. 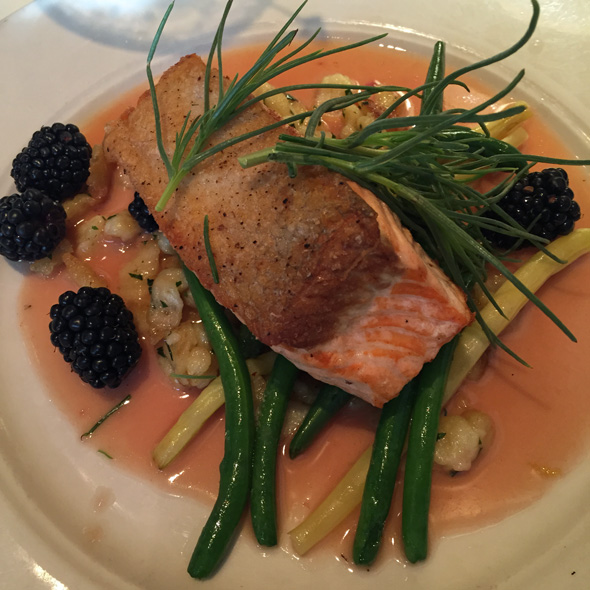 The cousins were in fine-form and we had such a great time at Higgins.

After dinner, we walked to the Arlene Schnitzer Concert Hall (always referred to as "The Schnitz" by locals) to listen to Anthony Bourdain deliver a 90-minute monologue about his life, his job, his television show, travel, food, family, restaurants, his sport (martial arts) and occasionally trash-talking about other chefs. Bourdain was very complimentary to My Idol, Ina Garten (Barefoot Contessa), and only dropped the F-Bomb a few dozen times over the evening. 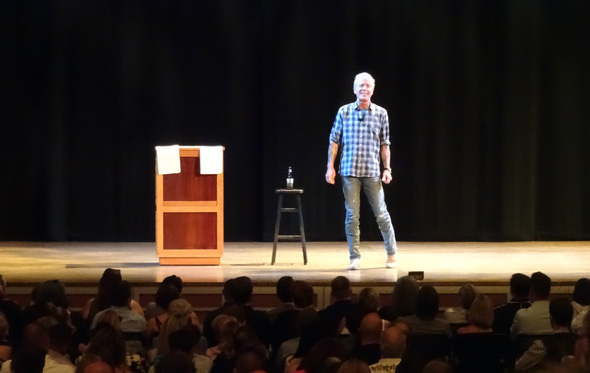 Too dark for photography

In the end, Dave did enjoy his birthday gift and we both enjoyed our fun-filled day with family! And we didn't have to worry about leaving our home overnight. 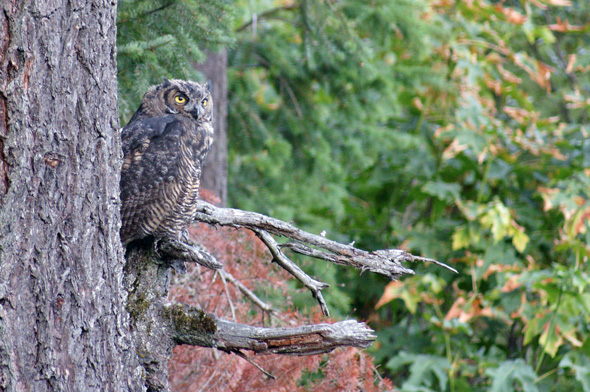 Until my next update, I remain, your exhausted correspondent.
« Home Leave, Revisited Leo’s Birthday Weekend Begins »