Indio, California: Our plan for the day was to drive over to Los Angeles (with Virginia & Gene) to see Lisa, Lenny and the C.B.E. Dave's Mom had not yet seen Lisa & Lenny's new house!

I made a potato, green pepper and uncured turkey-bacon hash before we headed out to Los Angeles on I-10. The drive over wasn't too bad. It usually takes barely over two hours on a normal day. Today was not a normal day. We figured it was Good Friday. Spring Break. Not a lot of people at work. School.

Traffic Sucked the Big One.

No matter. We arrived to Lenn & Lisa's in time for a lovely luncheon. Our Girl prepared an asparagus frittata, tossed salad, matzo with triple-creme brie, strawberries and several Kosher-for-Passover desserts. Leo napped while we dined, but after his nap, he was full-on-charm-mode, impressing his Grandmother and Great-Grandmother with belly-button-finding skills and clapping proficiency. 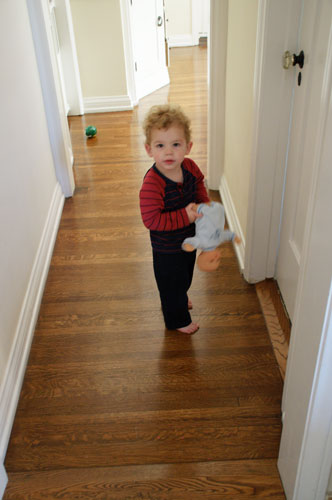 I brought Leo a baby doll today. It is a French Baby Doll

Leo really liked his baby doll. He kissed the doll. Hugged the doll. Pulled the stocking cap off the head. Threw it on the ground. Stomped on the doll. 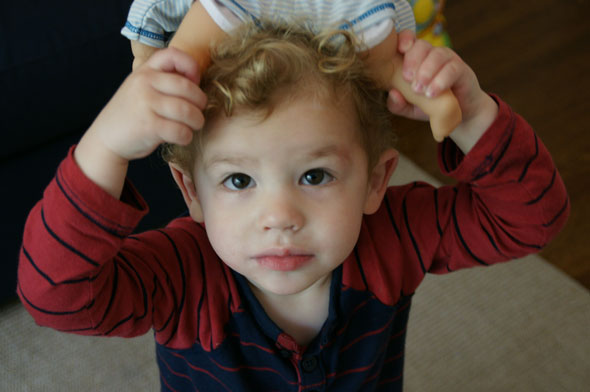 So, Bubbe, I am giving my new baby doll a ride on my head. 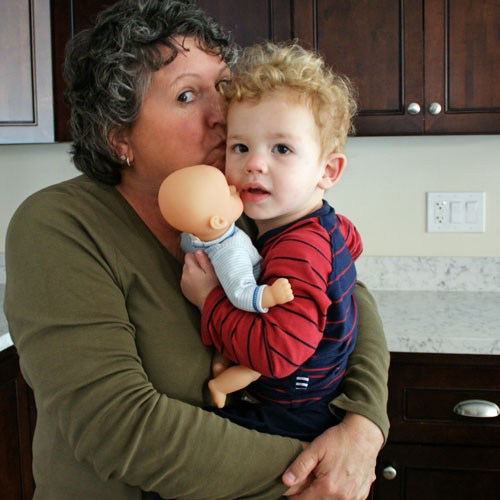 I had not seen Leo since Tuesday, but I swear he has grown several inches and is smarter and cuter than last week.

And now four photos of Lisa with her Grandmother and her son: 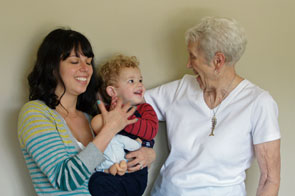 I love the way Leo looks at his Great-Grandmother! They sang songs and played all sorts of games. Virginia raised four sons, so knows all about boys!

After our visit, we headed back to Indio. The Ducks were playing against (the #1 seed) Louisville. We listened to the game on the satellite radio. Terrible score. The Ducks lost. Badly. Not only was the score terrible, traffic was basically at a stand-still. In all our years of driving between Indio and Los Angeles, this evening takes the cake as the Worst Drive Ever. 3.5 hours! Ugh. There is a new toll express lane available for people with transponders. I ordered a transponder (via my phone) on the way back to Indio. If all goes according to plan, we will be flying in the FasTrak lane on our next trip to Los Angeles.

We drove up to the clubhouse in our (fancy new used) golf cart and had a wonderful dinner. A very great day, (if we do not include terrible traffic and terrible basketball scores) spent with family and the C.B.E.

Until my next update, I remain, your blessed correspondent.

LET'S MOVE IN MARCH! I have challenged y'all to get out there, lace up your sneakers and walk or jog (or the exercise of your choice) at least 30 minutes - five or six days a week in March. I'm doing this for charity and my prominent backside.

I can't even walk down the stairs in our motorhome. Running isn't even discussed. What is being discussed is the name of an orthopedic doctor. How's it going for you? Please comment below.