Las Vegas, Nevada: We are terrible gamblers, so the #1 reason we visit Las Vegas is to either attend an event/concert, visit Cory... or to eat. This week we are here for thePac-12 Basketball Tournament, to visit Cory... and to eat.

We are staying at the MGM Grand Hotel because they are hosting the basketball tournament in their massive Grand Garden Arena (Jimmy Buffett also performs here). 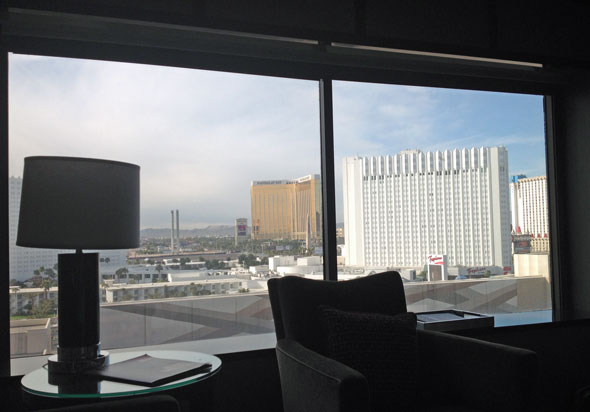 Though the windows are disgustingly filthy, our view is to the Mandalay Bay. We also have the constant entertainment of watching planes taking off and landing at the Las Vegas airport.

While we were having a lazy Thursday morning, Lenny and Lisa took Leo to the zoo in Los Angeles: 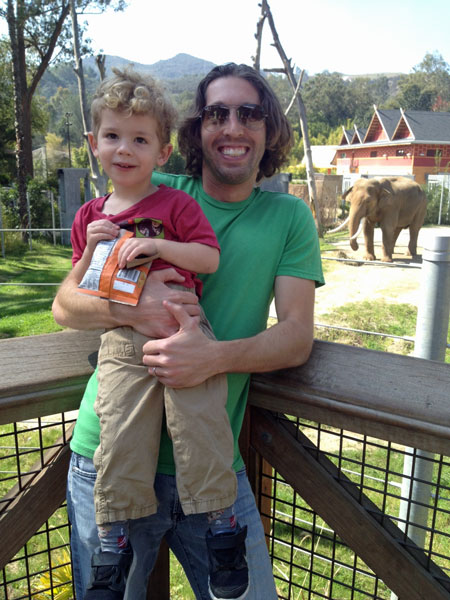 Leo, at 2 years 7 months, is simply huge. Really really tall. Still only 25 pounds though. Toothpick, just like his Dad.

We went to the arena to watch the two morning session games - Arizona v Utah and Cal v Colorado. 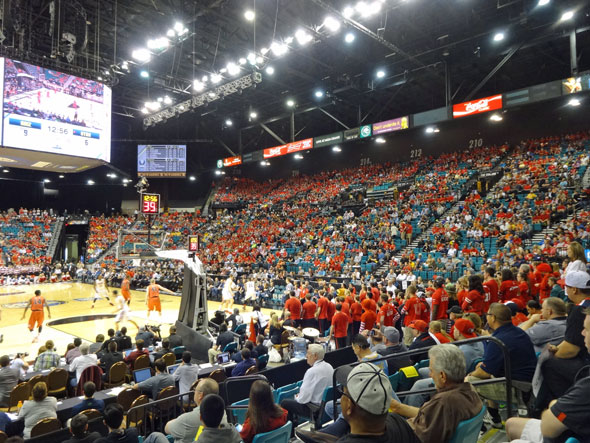 The arena was a sea of red and... well, red for the Arizona v Utah game. Oregon beat Arizona last week in Eugene in our final home game. Glad the Ducks were not playing Arizona today because Arizona was on fire and simply destroyed/embarrassed the Utes 71-39. If Arizona coach, Sean Miller, had not put in his bench (Miller is classy) during the last five minutes, I hate to venture what the final score could have been. 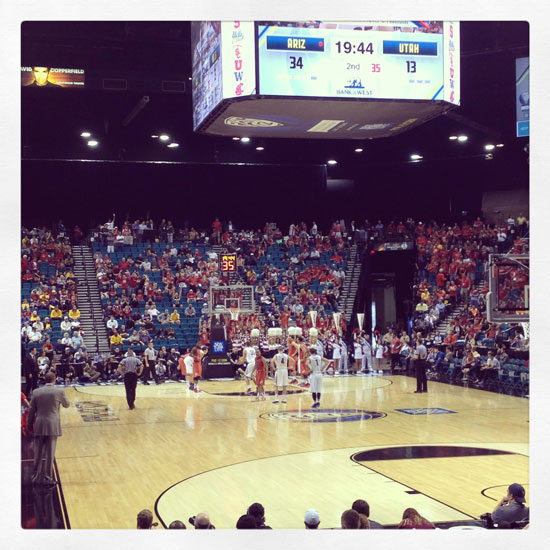 Then we had a little break before the Duck game, so headed to the Wolfgang Puck restaurant in the middle of the MGM Grand Hotel & Casino. Lenny just loves the house-made truffle potato chips with blue cheese served at this restaurant... so we ordered a batch and snapped tempting photos to torture him via text message. 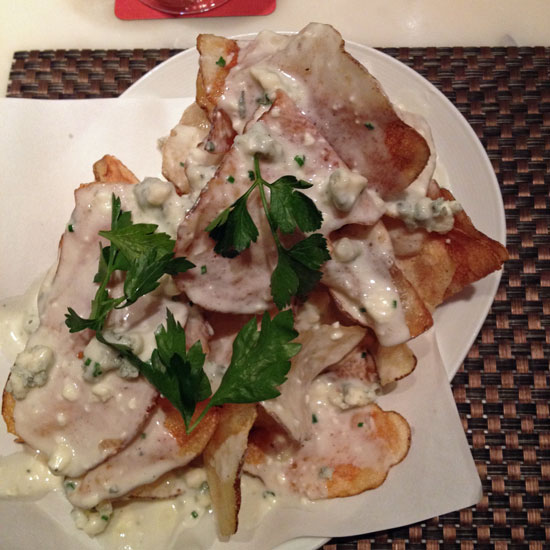 Is this why some men dislike their Mother-in-Laws?

At six o'clock we found ourselves back in our seats at the MGM Grand Garden Arena for the Ducks v UCLA game. Blue Man Group "sang" the National Anthem... except the Blue Man Group do not speak, so they just "drummed" the anthem. Not my favorite rendition. 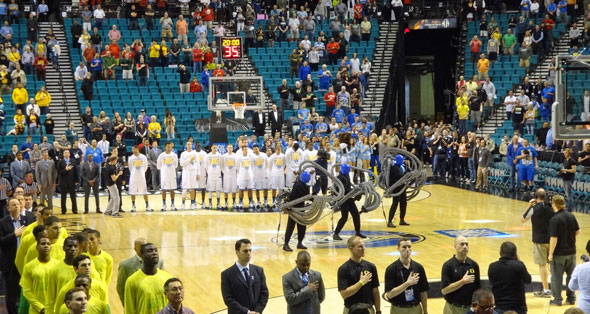 I am so sorry to report My Ducks lost to the UCLA Bruins. We pretty-much stunk-it-up tonight. Not sure what happened, but UCLA walked all over the Ducks, winning the contest 82-63. A whooping. (Last year, Oregon won the Pac-12 tournament!) 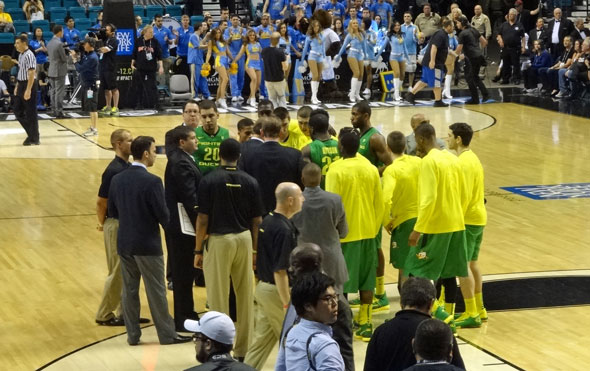 Not the greatest day in school history, but apparently Oregon will live-on to play another day in the NCAA tournament... except hopefully they will have their act together at the Big Dance. Truth be told, what team could beat UCLA tonight? UCLA made over 60% of their shots. 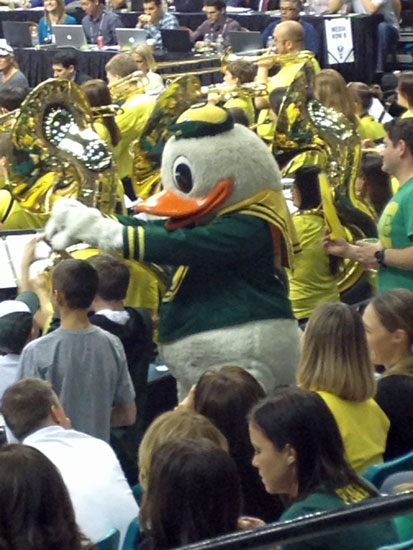 After our loss, we trudged out of the arena, searching for food and a place to watch the Stanford v Colorado game on television.

There may have been a little cannibalization happening at dinner... someone ordered duck spring rolls... 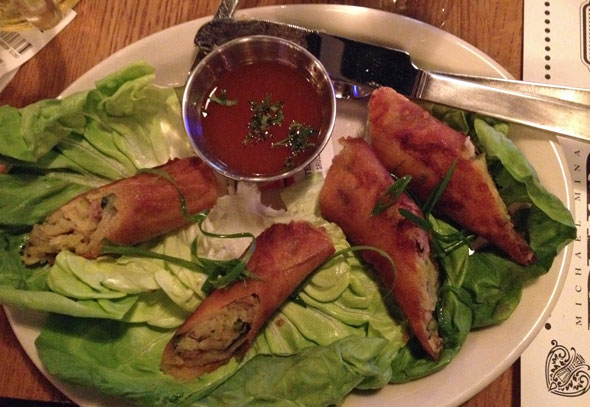 And there may have been a little beer consumptioning happening at dinner... someone ordered a vat of beer... in a self-serve keg-type container. 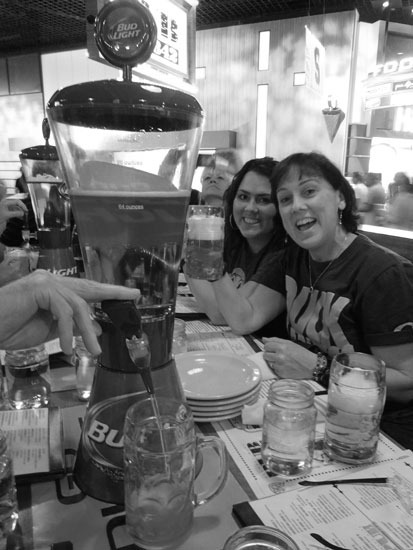 Until my next update, I remain, your "will we stay, or will we go?" correspondent.