Portland, Oregon:  It's the worst it's ever been. The air is so smoky from the forest fires now, it is even seeping into our house. Our throats are sore and scratchy. I am sneezing like mad. The wild fire in the Columbia River Gorge is now 45,000 acres, but Mother Nature promises rain - glorious rain - tomorrow. Who ever thought an Oregonian would be praying for rain?

I wish I were in polluted Los Angeles, since today Portland registered the worst air quality in the nation. I venture to guess our air quality was worse than Beijing today.

Just like her brudder, owner of light blonde curls when a toddler, Lucy's hair is getting darker and darker every day. One day soon, strangers will stop assuming dark-haired Lisa is Lucy's nanny?

It was too smoky to do much of anything today. A good day to stay in and watch college football (DT) and needlepoint (me). I made a vegan attempt at traditional tailgate foods for lunch: 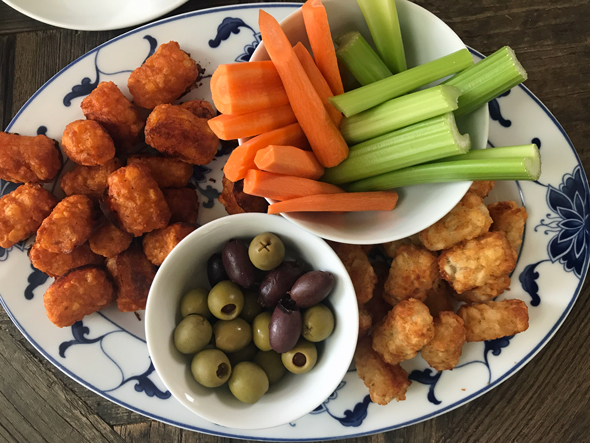 Who knew, but Ore-Ida tater tots are vegan! (Of course, they are.) I baked a few right out of the package and tossed a few in Frank's Buffalo Wing Sauce before baking. We liked the plain tots - with the wing sauce used as a dip - best. Whatever. Either way, it was a fun take on unhealthy (vegan or not) tailgate foods.

I have learned to read the labels of food packaging this Vegan Month to double-check there are no hidden non-vegan ingredients. Frank's Wing Sauce has "natural butter flavor" listed as an ingredient, but there is an easy way to tell if that "butter flavor" contains dairy: the Kosher designation symbol on the bottle. Nearly every packaged food in your grocer will have a Kosher symbol. (Okay, those pork rinds will not!) Food companies pay (usually one of the big four) American Kashrut organizations to certify their product as Kosher. (Seriously, open your cupboard or fridge and you will find the little "K" or "U" or Star of David, or some other symbol, on most of your packaged foods. Sometimes it very small and very hard to find!) Ore-Ida Tater Tots are Kosher . Frank's Wing Sauce is certified Kosher and has a small circled "U" on the label, which means it has been certified Kosher by the Union of Orthodox Jews. If the "natural butter flavor" listed in the ingredients actually contained butter/dairy, the Kosher symbol would have been presented as a circled "U" and a "D" after, meaning it was a Kosher food, and it contained dairy. If you are really interested, Wikipedia has a good explanation of the laws.

The Oregon Ducks beat the Wyoming Cowboys in Laramie during another bronco-buster, 49-13. Ducks are now 3-0, or as I like to say, undefeated.

This afternoon, I cut up a Delicata squash, one peeled sweet potato, one red pepper, half a sliced red onion, and several cloves of peeled garlic, and doused them all a mixture of olive oil, balsamic vinegar, salt, pepper and fresh thyme leaves. The veggies marinated in the fridge until we were ready to think about dinner. 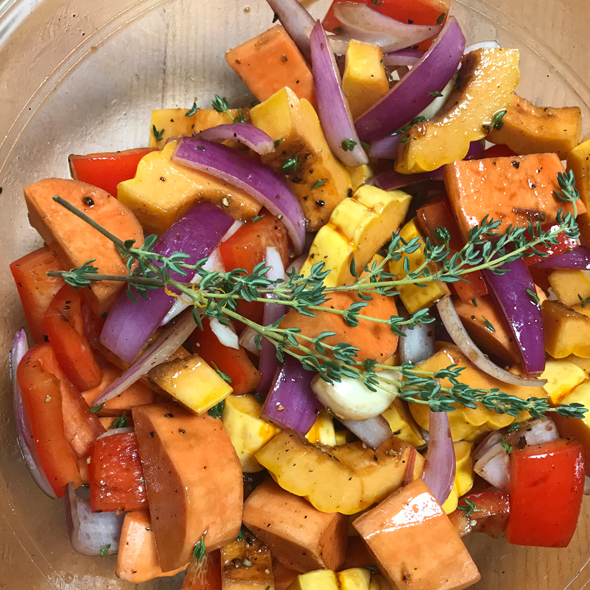 This is, of course, my recipe for Balsamic Roasted Vegetables, which I served tonight over a bed of arugula and a side of rice pilaf. 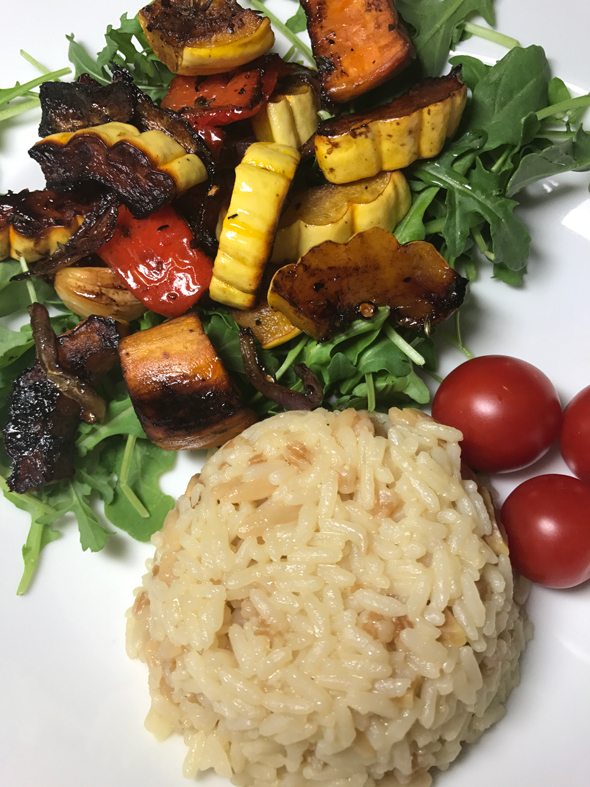 It made way too much food for two people, but I wanted extra veggies because I have a plan to smish-up the extra roasted vegetables and stuff them into ravioli or lasagna or something (?) at a later date. 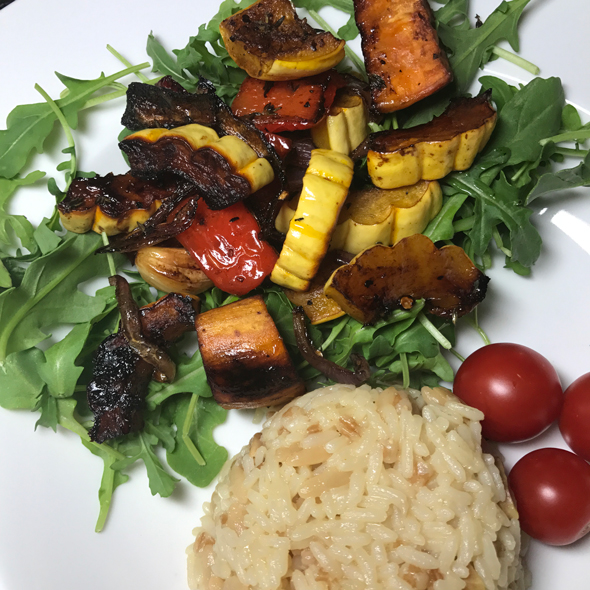 They were extra-crispy tonight - due to all the sugar in the vinegar - but the crunch was nice.