The waiting was really bad for us, because we knew we were only 45 minutes from our family! We had not seen Little Leo since August 5th. We were pretty-sure he was in college by now.

I had sent Lisa a photo of her Dad as we boarded our flight at Heathrow and when we landed in Los Angeles, Lisa sent a text that Leo had been asking to see the photo again and again, always asking for "Bubba".

We finally pulled-up in front of Lenny & Lisa's house to see the three of them waiting for our arrival. Leo was squealing. He wanted Bubba! 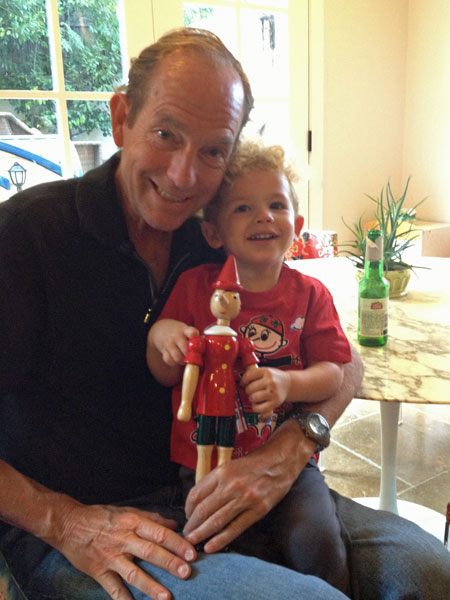 Look at our Darling Boy with souvenirs of our trip - a Pinocchio doll and tee-shirt. Gifts purchased for Leo in Florence. Italian Pinocchio dolls come with two noses that screw-in - long and short!

Our girl roasted chicken, steamed green beans and served a tossed salad. Dave and I tried our best to stay awake, but lost the battle. I gave Leo and bath and that was the end of my jet-lagged evening. 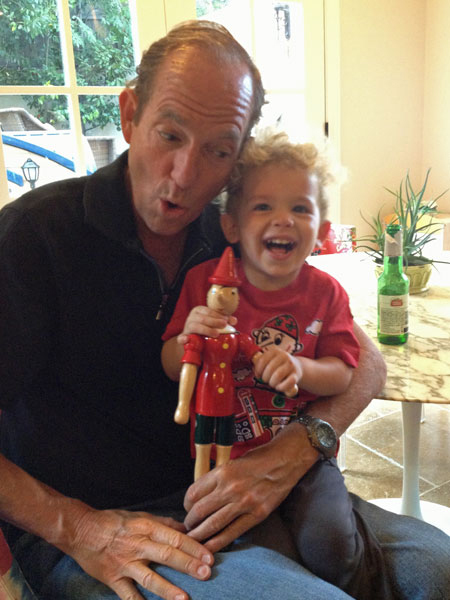 I cannot tell a lie - these two boys are the light of my life.

So many changes in a barely-two-year-old in three weeks. Leo no longer wears diapers.

We are happy to be back in the USA, but our travels do not end here. Oh, no... more adventure awaits.

I will have a recap of our trip soon and will also update our hotel information (that I really have neglected) as soon as possible.

Until my next update, I remain, your American correspondent.
« Buckingham Palace Home! »