TrackTown, USA:  Dave returned to Eugene yesterday to attend Trustee Meetings and I drove down (alone! two hours on the freeway!) this afternoon to accompany him to a social event for the Trustees this evening.

I almost didn't make the trip. Traffic was so terrible. It took over an hour to reach I-5 from our house. After reaching the freeway, traffic was going nowhere. I sat on I-5 forever. The usual two hour trip took 3.5 hours. Never saw a reason for the delay. No accident. No broken-down car. Nothing. I rarely drive. Now I remember why. Luckily I can now ask Siri to send a text message to My Driver, so I do not need to look away from the lane for even one instant. Though without actually looking at the phone (which was hidden away in my handbag), one can never be absolutely 100% sure the message was sent to Dave Taylor. There is always the possibility the messages are sent to a sound-alike name. Luckily for me, I do not know a Dane Baylor or a Jane Sanders... so DT received my messages and knew I would be arriving late to Eugene.

I was in the motorhome just long enough to put on lipstick before we were off to a reception for the UO Foundation Trustees. The gathering was held at the home of a Eugene-based Trustee. The dress code was "Game Day Casual", and the party was held on the back patio of their home, overlooking a pond and stream.

Drinks were served. Appetizers were passed and then a surprise guest appeared - from around the side of the house to the back of the patio: 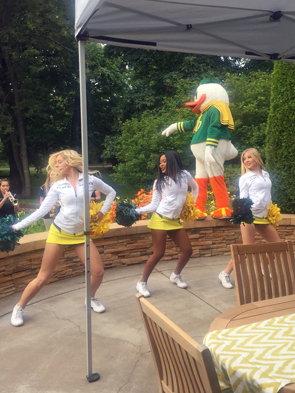 The Duck showed up - and he brought a few of his cheerleader friends and several members of the UO band.

Our cocktail parties completely suck compared to this one. 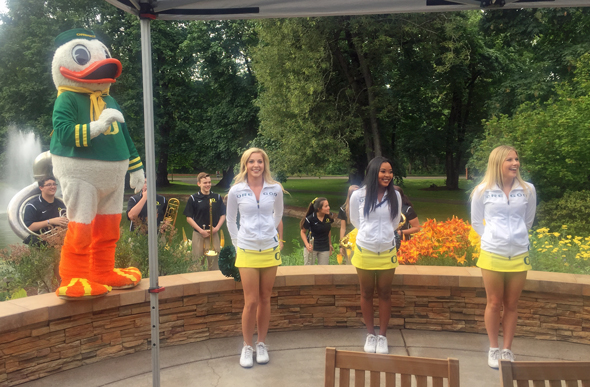 The band played the UO Fight Song and then did a few cheers with The Duck. 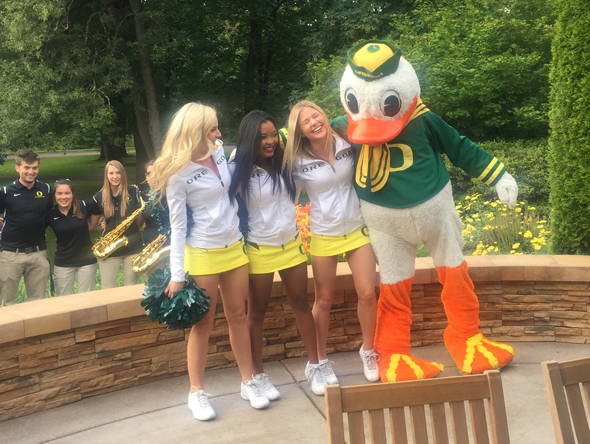 Of course, the whole show finished with another rousing rendition of the Fight Song, with all the Trustees singing along and finally a group photo with everyone's Favorite Mallard: 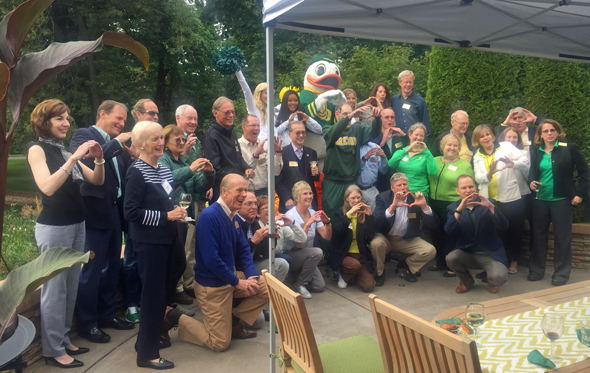 The Duck turns the Trustees into kids again.