Indio, California: My Little Mind keeps wandering back over events, feelings and thoughts from this very emotional past football season and our weekend in Dallas:

THE DUCKS: I couldn't be prouder of the Oregon football team, staff and coaches. They are a class-act and a very good football team. Finishing #2 in the country (and losing only two games all season) is incredible. When Dave and I were in school, Autzen Stadium was nearly empty. Now the athletic department sell hundreds of standing-room-only seats. Having a winning football team brings a lot of attention to a University. More students apply. More money is donated. 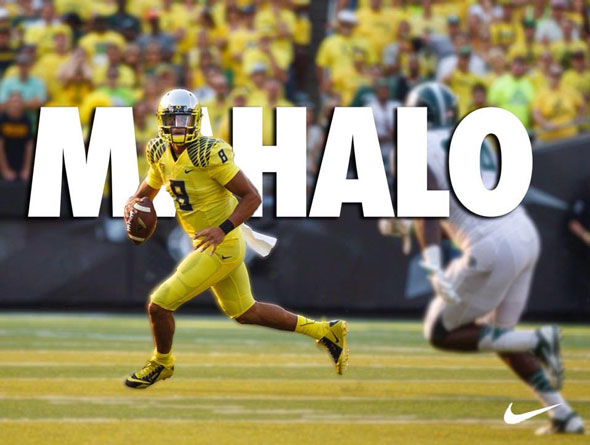 MARCUS MARIOTA: What an outstand young man! Marcus Ardel Taulauniu Mariota has already graduated from the University of Oregon and declared himself for the NFL draft this morning. Pretty sure he does not read my blog, but I want to thank him for his time, dedication, drive, leadership and intelligent play the past few years. He really brought a new excitement to the game. Oregon fans simply adore him and the entire State of Hawaii has rallied behind their Heisman-winning citizen. Too bad Honolulu does not have a professional football team (Honolulu Hawaiians? Waikiki Warriors?) for Marcus Mariota to lead. Wouldn't that just be too dreamy? (Leo is hoping Mariota is drafted by Tampa Bay, because he just loves pirates.)

OHIO STATE: Another class act and - obviously - a ridiculously outstanding program. Every single Buckeye fan we met was polite. No one said a discouraging word to me before the game and not one OSU fan piped-up with a snide comment after the slaughter. And they could have. Congratulations, Ohio State, on a great game.

THE GAYLORD TEXAN: The normal rate at the Gaylord Texan Hotel is $179. This weekend, rooms started at $379. The facility is massive and self-contained, but it is beginning to show its age a bit and the decor seemed dated. The hotel, knowing full well they were completely sold-out, was hopelessly understaffed. Housekeeping usually showed-up to our room around 4p. The lobby bar ran out of beer and wine on Sunday night. (The last bottle of beer sold, by the way, was a Corona Light.) Things weren't always completely perfect in the terrarium.

FINALLY: I am so happy to be home. No more football. No more frozen toes. I am anxious to try a few new recipes and a few new restaurants - and can't wait to see my gorgeous grandchildren. But first, I'm going to sit down and write a thank you note to Marcus Mariota and wish him well.

You may also like:
Photo slide show from the University of Oregon
New York Times - Aug 2014: Mariota growing up