Dallas, Texas: I should have never left the terrarium. For three days my entire world existed within the glass dome encapsulating the Gaylord Texan Hotel. There was nothing - but freezing, foggy air - on the outside to entice me to venture from the goldfish bowl. This world was filled with friends, happy Duck fans, green & yellow, flowing cocktails, turn-down service, smiles and the occasional glimpse of a player spending a few moments with his family. The anticipation. The excitement. Pep rallies. Motivational videos. Everything was so lovely in Shangri-la. 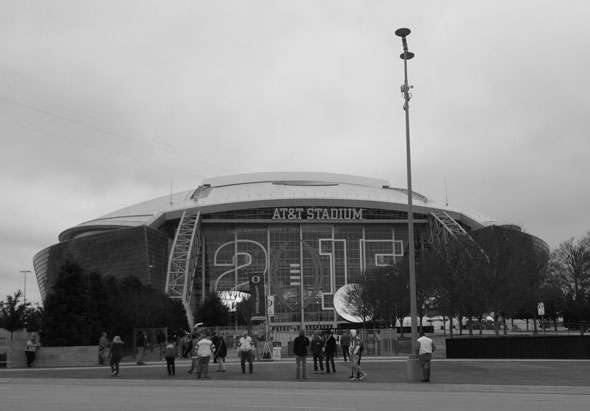 My cousin's daughter, Kara, arrived from her home in southern Texas and drove us (Dave, Red, me) to ATT Stadium (home of the Dallas Cowboys) in Arlington. The temperatures hovered at 36°, with a wicked wind blowing through to my bones. Dave and I were hopelessly ill-prepared for cold weather. Miserable. 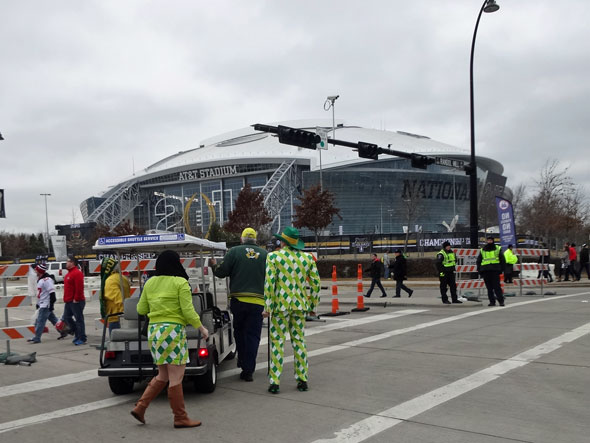 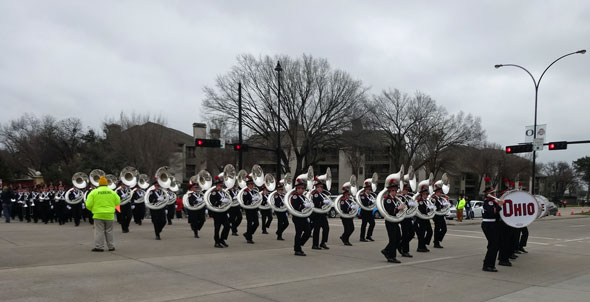 The Ohio State Marching Band arriving to the game

Our first destination was to the FanFest - staged by our friends at Etzel Agency. (Etzel have orchestrated the fan fests at the last two Olympic Track & Field Trials in Eugene.) 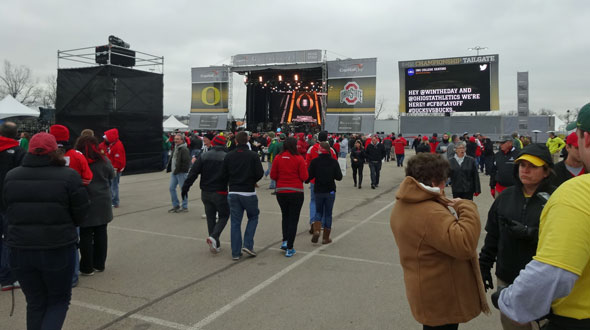 The site was huge, with tents selling all sorts of food and drink, game merchandise, games for kids - even a zip-line. A stage filled one end of the festival and 25,000 people stood in the icy air to listen to the Zac Brown Band play. Our next stop was to the official University of Oregon Tailgate party, which was about a six block walk. By the time we arrived - with Kathy, Woody, Mary & Steve in tow, I could no longer feel my feet. My Poor Skinny Driver was even colder than me and suffering from the wind. The party was "indoors" - meaning inside heated tents. The air may have been heated, but the pavement was not. Cold feet! The U served us a delicious Texas BBQ dinner - brisket, ribs, sausages and smoked chicken. The marching band, The Duck and the cheerleaders also arrived to the party to entertain Oregon fans. 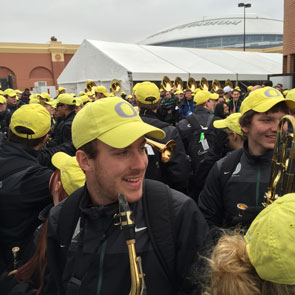 We were all so cold and anxiously awaiting the two-hour prior-to-kickoff timer to ding so we could enter the heated stadium. The only problem? We had to leave the semi-warm party tent and walk a half-mile through the arctic to the arena. I could have really used my golf cart at this game!

Finally inside beautiful ATT Stadium, we began to once-again feel our feet. Before the game, I had a text from our friend, Clay Travis (Fox Sports college football analyst). He stopped by for a quick hello before kickoff. 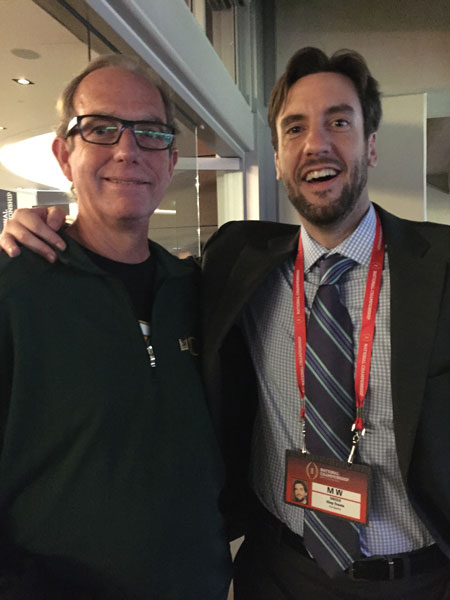 I was sent to the cocktail line to order for our group. Four beers and three cocktails - $109. Somewhere, Jerry Jones is sunning himself on a warm tropical beach. DT had arranged for fabulous seats in the Club Level. 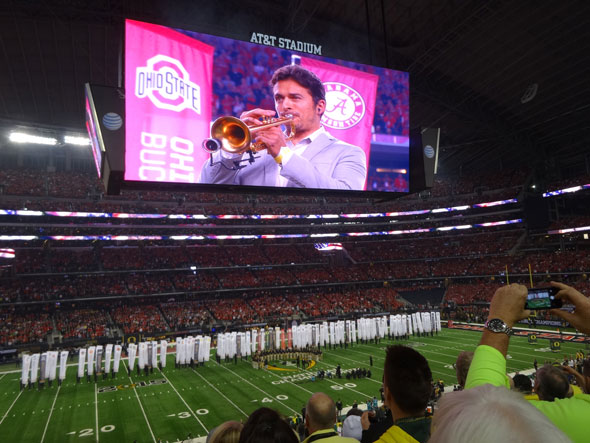 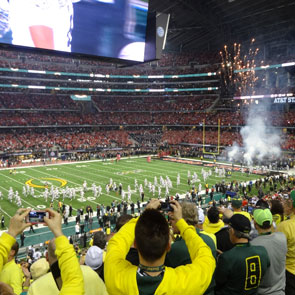 Cousin Kara, and the Ducks enter the stadium

Meanwhile, back in Los Angeles, the kids were ready for kick-off as well. Leo and I had facetimed before he left for school. He wore his #8 Mariota jersey to school, sang the fight song to me and said, "I am not Leo, I am Marcus Mariota". 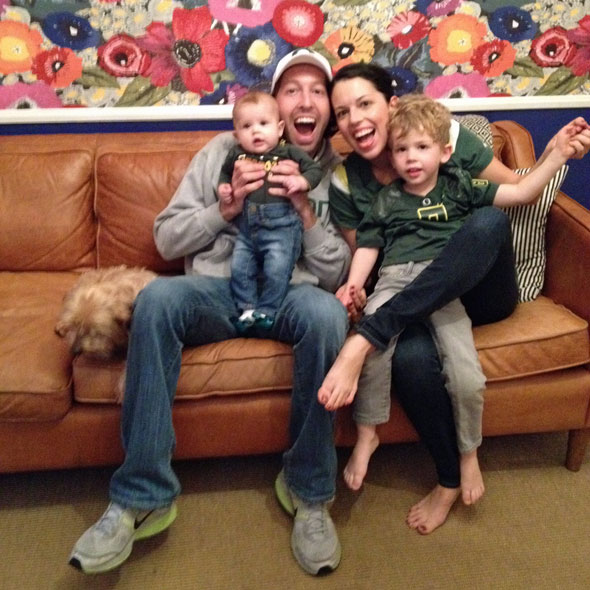 Lady Antebellum (it's a group, not a lady!) sang the National Anthem and it was finally time for the teams to take the field. The stadium wad divided about 60% Buckeye, 40% Duck fans. The Ducks scored on their first drive. Then everything fell apart. The Ducks defensive line could not stop Ohio State. The Ducks could not take advantage of several Ohio State turnovers. Our dream story of our Heisman Trophy-winning quarterback leading the Ducks to a national title became a nightmare. Nothing was going according to plan. Now I know how Florida State fans felt after the Rose Bowl. It wasn't like Ohio State simply beat the Ducks - they smashed us. If OSU had won by 3 points, the loss would be easier to face. But the final score was 42-20. There is no "plan" in college football, and I have been to plenty of big games where the Ducks have lost. 2011, in this very stadium, we lost to LSU. Don't forget the awful loss to Auburn in Phoenix. The Rose Bowl loss to Ohio State a few years ago. Loss. Loss. Loss. I have been to plenty of games where the Ducks have won big. You don't get to the National Championship with a bad team. The Ducks are a great team. A very, very great team. I am very proud of them. 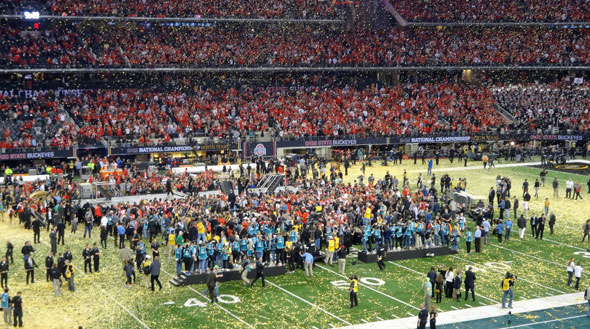 After the game, we returned to the bubble. It was after midnight and the hotel lobby was very quiet. The lobby bar was closed, but an attendant was herding returning fans to the sports bar, proclaiming "food served until one; drinks until two". Music to our ears. Even at this late hour, the bar was completely packed with Duck fans. The gigantic televisions were still playing the game highlights and post-game interviews. The mood was subdued. We had drinks with friends and fell into our beds. Finally thawed, but a chill in our hearts.

Until my next update, I remain, your GO DUCKS correspondent. NOTE TO READERS: Thank you for the many encouraging emails, comments and Facebook posts we have received over the past few days. I apologize for the delay in posting this column. We traveled all day Tuesday (flight delays, gate changes, exhausted), then my website server went down... not to mention this was one of the hardest columns I have ever had to write. I am sad.
« School Activities After Thoughts »