A Roll in the Hay

A bit of a quiet day. A bit of writing. A bit of yard work. A bit of cooking. A bit of jogging. A bit of watching the track meet LIVE from Paris on the internet... and then watching it again at 6 o'clock this evening on Universal Sports television.

I am happy to report, just-graduated and no-longer-a-Duck, Andrew Wheating finished fourth in his first professional 800m race in Paris this evening. Nice debut! Andy ran a personal best 1:44.62! The race was incredibly strange as a runner cheated.

Cheated in the most unbelievable way. Something I have never seen in my lifetime of watching track & field. Polish runner, Marcin Lewandowski, passed runners on the inside... and by the INSIDE, I mean he ran onto the infield grass to pass. What a complete knucklehead. Did he think no one would notice? Of course he was disqualified.

You have to see it to believe it - and you can if you click this link. (Andy is the guy near the back of the pack who is a head taller than the other racers.) If you do not follow track, you may not know they hire "rabbits" in the big races to set the pace. American Khadrvis Robinson sets the pace for the first 600m, then drops out. After he drops out, watch for Lewandowski (blue singlet with bright yellow shoulder stripes) as he steps onto the infield grass on the curve at 1:30, passes a runner and then again at 1:40 when he actually passes another racer.

I can't make this stuff up. I hope they drug test this dude.

I have another movie for you tonight, Bored Patient Reader! Yesterday I mentioned shooting video of our adorable Grand Dawg, Reese, rolling around in the hay in our field:

The only other thing I have to report is tonight I made Grilled Salt & Vinegar Potatoes from Heidi Swanson's 101 Cookbook site. I'm saying I made them. I am not saying I enjoyed them. 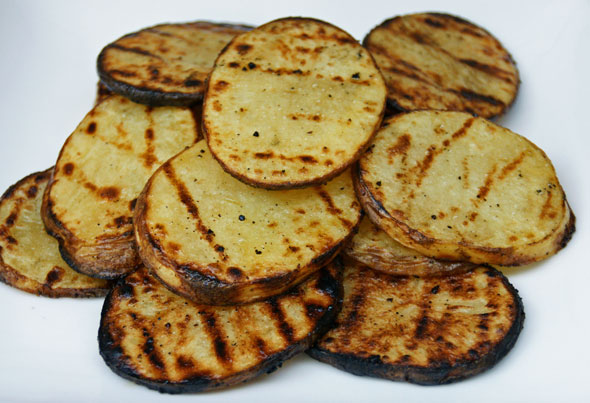 If you have a Jones for vinegar potato chips (or are five months pregnant or have just been disqualified from an 800m race for passing on the infield), I would imagine you would enjoy these grilled potato slices. If you have an aversion to having your house or RV stink like vinegar, I would suggest you not prepare these potatoes.

And so, I leave you to enjoy your weekend in peace.

Until my next update, I remain, your cinematic correspondent.
« A Major Minor League Day Lemon Artichoke Chicken Salad »