A quiet weekend around here. We each had work to do at our desks. Boring. To add a little excitement to our Sunday, our little Grand Dawg was stung by a wasp or two or three! 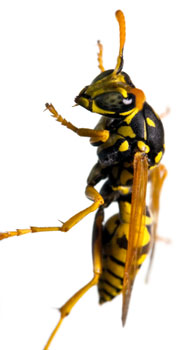 Poor Reese! We were walking behind the house and Reese was sticking his nose into something around the invasive species clogging the Northwest wild blackberry bushes, when he jumped up in the air and tried to bite at something at his hind leg. One instant later, he was dredging his head through the bark dust, trying to get something off his head.

Then I saw a yellow jacket on his head and knew he had been stung. Then I started to notice a wholotta swarming activity in our immediate area and realized Reese had stuck his nose into a yellow jacket (nasty wasps that feed on meat and rotting fruit) nest. Reese and I made a beeline (oh, I do amuse myself) towards the house. Once inside, DT and I looked Reese over and I began brushing all the bark dust out of his coat - only to find a still alive bee hiding in his hair!

Reese was stung on his eyelid and started to resemble a prize fighter after a tough round. Reese was very quiet all evening, but the swelling is gone. Poor Little Guy.

It seems our tradition the past few years that we go on a picnic to celebrate our anniversary and I always prepare a chicken salad. (DT is in charge of the champagne.) We love chicken salad and it is an easy-to-transport dish. This year, I made a different - yet so yummy - chicken salad with artichoke hearts in a tangy lemon dressing. 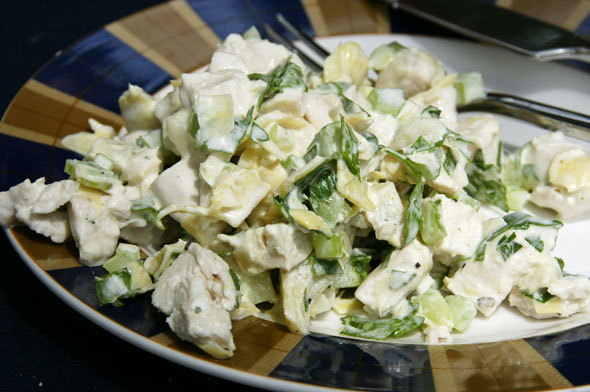 An easy recipe. Perfect for a picnic. Serve the salad over a plate of greens for a pretty luncheon plate. The salad isn't very salty - you may want to use a teaspoon of salt.

Place chicken in a medium saucepan with just enough water to cover. Cover the pan and bring the water to a boil. Reduce to a simmer and poach ten minutes, then remove from heat and allow to sit for an additional five or ten minutes, still covered, or until meat is just cooked through.

Remove the hot cooked chicken to a cutting board and chop into dice-sized pieces. Place chopped chicken in a large bowl and pour the dressing over the hot chicken, stirring to coat well. Refrigerate. When the chicken has cooled, stir-in the chopped celery, parsley, artichoke hearts and the mayonnaise (or yogurt). Chill and serve. 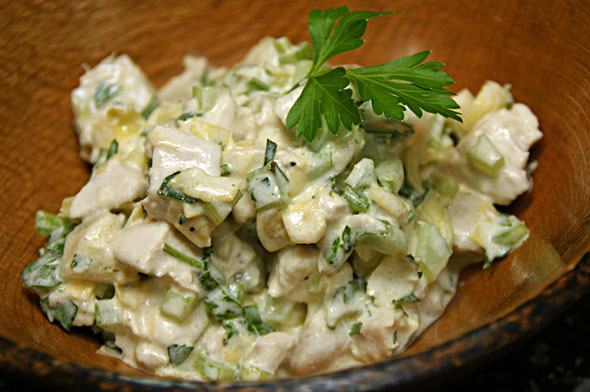 Until my next update, I remain, your tangy correspondent.
« A Roll in the Hay Cook this »