TrackTown, USA: The 44th Annual Prefontaine Classic meet was held at Historic Hayward Field this afternoon. An international field of stellar athletes gave us their best today, as they always do at this early-in-the-season event. The meet was shown live on NBC, and if you didn't watch it, or tape it... well, I am very sorry for you.

The meeting included two men's mile races. The first mile had all but one racer breaking the 4 minute barrier, and the one not breaking 4 minutes is in high school). 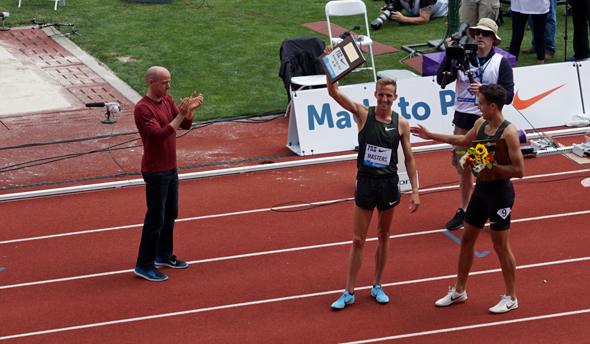 Our seats were directly in front of the triple jump pit, so we had great views of the competition all afternoon. 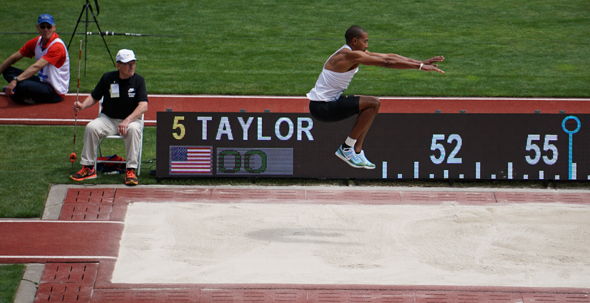 Christian Taylor won the event with a soar of 17.73 meters. That is just over 58 feet, people!

Mary and Steve had second row seats, so had great close-ups views of all the athletes. Mary snapped this photo of Duck alum Devon Allen (lane 8) in the 110m hurdles - with her phone. 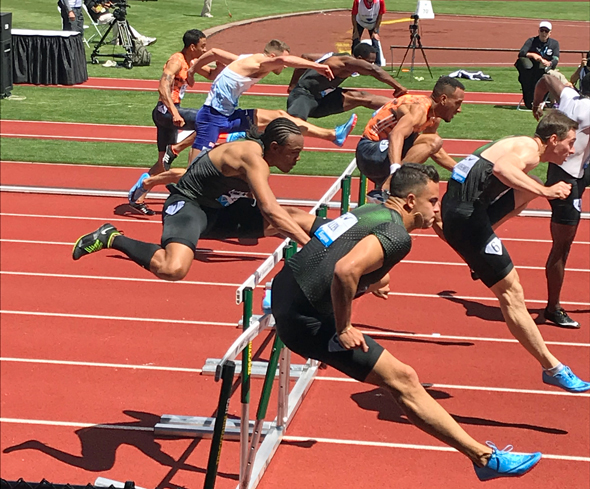 You may (or may not) recall that Mr. Allen not only is a hurdler, he played as a receiver for the Duck football team... until he blew out his knee... and then blew out his other knee. This is when he decided to concentrate on jumping over hurdles. It worked out for him. He graduated from the University of Oregon, and went on to finish 5th in the Olympic final. 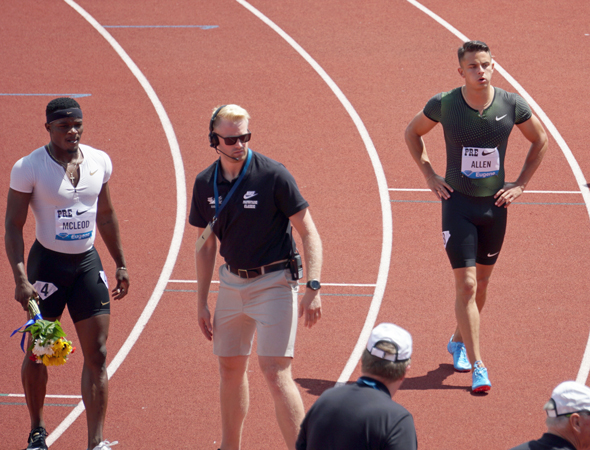 Allen finished 3rd today, in 13.13, behind Omar McCleod of Jamaica (13.01),and Sergey Shubenkob (usually of Russia, but running without a country today) in 13.08. The infield announcer spoke with McCleod and Allen after their race, and McCleod joked that the Hayward Field crowd liked him more than they did Devon Allen. The announcer told him something like: no, they don't, and the crowd laughed so much. As did Devon Allen. We love every athlete, but if a Duck (or alum) is on the track, they know we are rooting for the Duck.

My girl-crush, Ethiopia's Genzebe Dibaba, holder of the world record in the 1500m, ran the 5000m this afternoon. Of course she won. She is Dibaba. Below, she is pictured urging eventual second-place finisher, Letesenbet Gidey (also of Ethiopia) to pass her. I assume Dibaba needed a bit of a rest? Convincing her countrywoman to let her draft behind for a while? Must be nice.

I'd pick up Dibaba's dry cleaning or something.

The best (and most anticipated) race of the meet is the Bowerman Mile. Named after the legendary war hero, distance coach, and the man who help make jogging a mainstream activity around the world, Bill Bowerman, the field is always comprised of the best 4-lappers in the entire whole wide world. 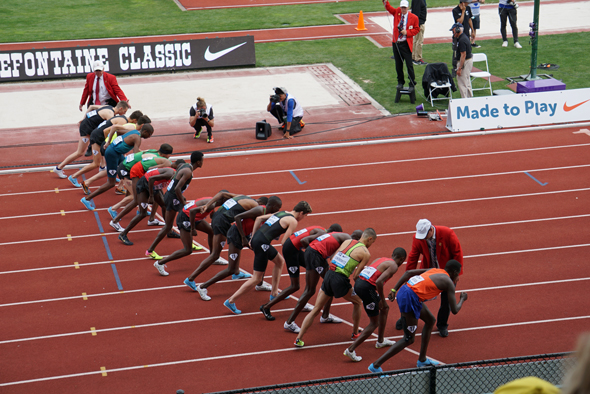 A full field of 15 racers and two rabbits, they ticked-off fast laps, with eleven of the racers breaking the four-minute barrier. Timothy Cheruiyot won the competition in 3:49. How is it even possible to run a mile that fast? Amazing. Duck-alum Matthew Centrowitz, 1500m gold medalist in Brazil, finished 6th today in 3:53. These times are pretty sweet so early in the season. The mile is not raced often - it's just a specialty event anymore - so the guys will switch back to the usual 1500m distance for the rest of the summer. Good luck and fast times to you all! 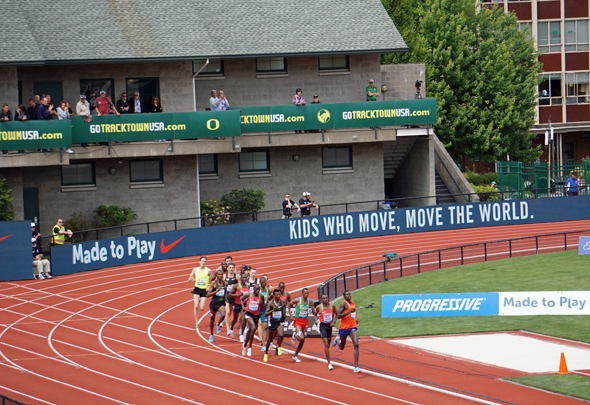 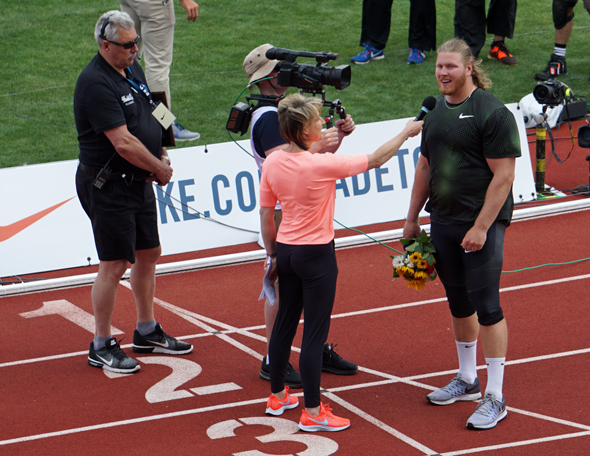 Ryan Crouser being interviewed after his victory

Not only was Crouser's victory amazing and impressive to the fans, it was worthy of the "Athlete of the Meet" prize. Yeah, Ryan! 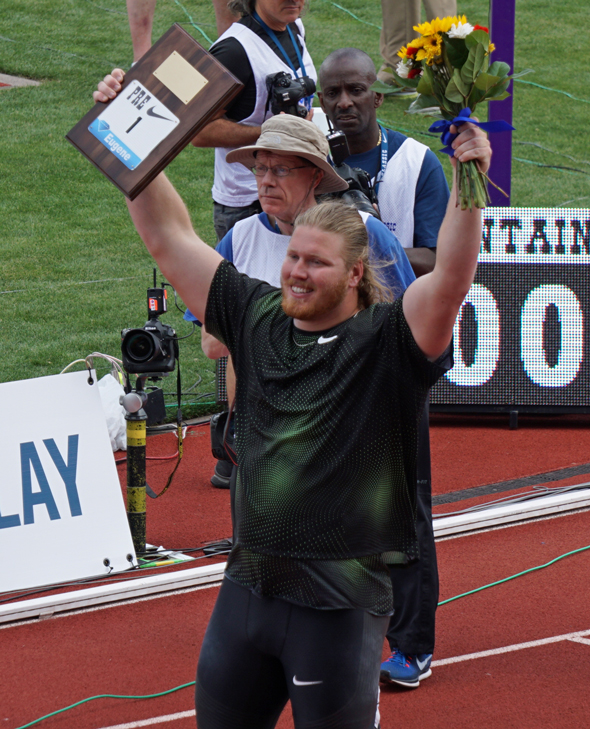 Crouser later gave me a high-five. My entire hand fit flat inside his palm.

Another amazing two hours! I love this meet. If you don't feel good after reading my little teeny re-cap, watch this video:

Now, go outside and play.

Until my next update, I remain, your "made to play" correspondent.